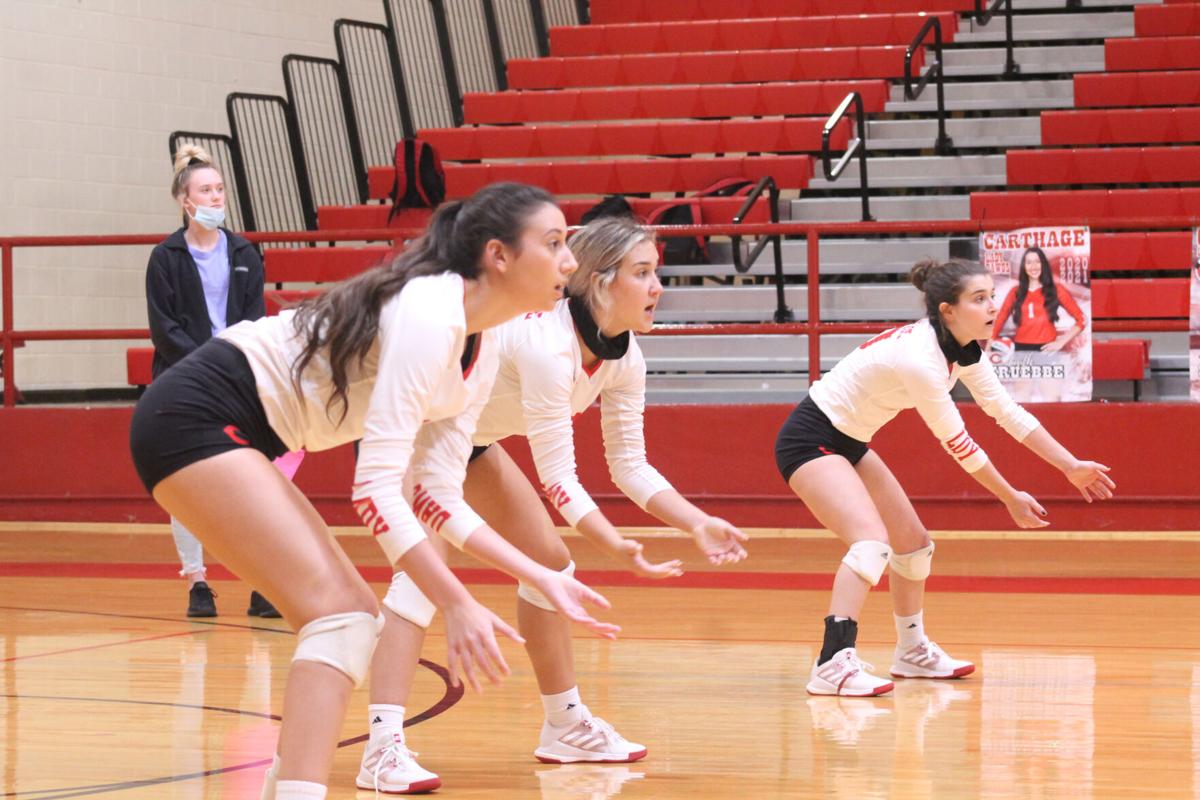 The Carthage back line of Faith Kruebbe (left), Kennedy Stanley (center) and Jaycee Paige (right) await the serve in Thursday’s match against Rusk. The Lady Dawgs improved to 6-0 in district with the straight-set win. 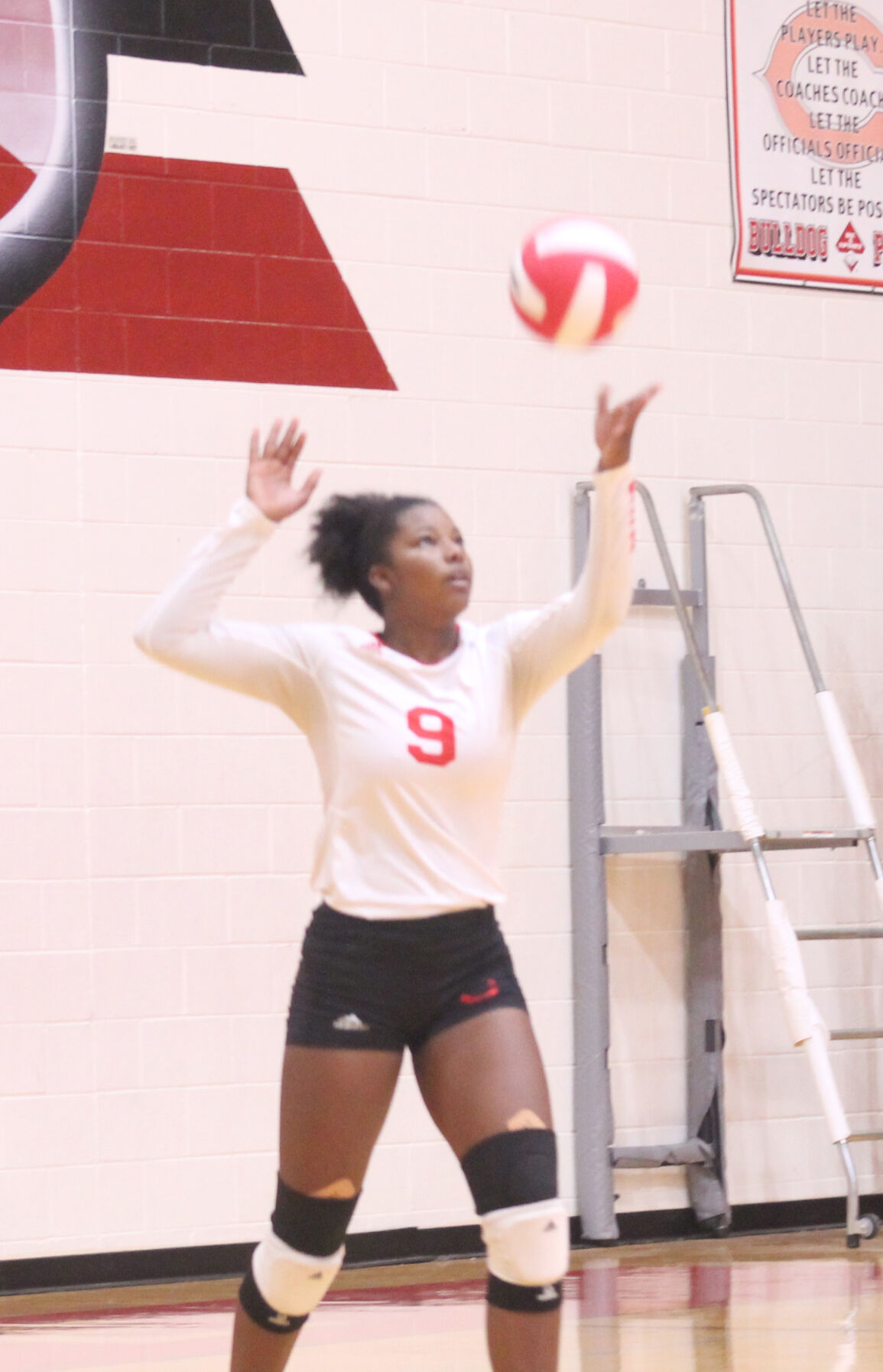 Carthage’s Makhia Lewis keeps her eye on the ball as she prepares to serve in the third set of Thursday night’s match against Rusk. The Lady Dawgs swept the visitors.

The Carthage back line of Faith Kruebbe (left), Kennedy Stanley (center) and Jaycee Paige (right) await the serve in Thursday’s match against Rusk. The Lady Dawgs improved to 6-0 in district with the straight-set win.

Carthage’s Makhia Lewis keeps her eye on the ball as she prepares to serve in the third set of Thursday night’s match against Rusk. The Lady Dawgs swept the visitors.

Just a few short weeks ago things were not looking good for the Carthage Lady Bulldogs.

They were several games below .500 and not resembling last year’s team that made it to the state semifinals.

But they’ve won six straight games since then — all in District 17-4A — and clinched at least a tie for the title with a sweep of the Rusk Lady Eagles Thursday night in Bulldog Gym.

Rusk is two games behind them with two matches to play.

They were scheduled to be at Jasper on Friday and have an open date on Tuesday, but Coach Dawn Stewart is trying to pick up a game. The team will play a non-district game against Longview on Oct. 27.

“I’m just proud of where we are,” Stewart said. “The girls’ expectations, their confidence, has really improved. I told them there is still some doubt (in their minds) about how good they can be. We’re doing a good job of not letting mistakes get to us anymore.”

The serving of Faith Kruebbe and Erin Dodge in the first set helped the Lady Dawgs turn a 4-4 tie into a 13-5 lead.

The visitors would get as close as 16-9 before Carthage the play of Kruebbe and Kaliyah Timmons helped build the lead back up to double digits and the Lady Dawgs wn going away.

The second set saw the Lady Dawgs jump out to a 4-1 lead and increase it to 10-1 with Sadie Smith serving. Mara Hodges would get seven straight service points, thanks in part to kills by Makhia Lewis and Caroline Baldree to increase the lead to 20-4.

Kruebbe got a kill, then served the last two points to close out the Lady Eagles.

Rusk was determined not to go down without a fight, and the Lady Eagles took it to Carthage early in the third set.

They built an early lead and the Lady Dawgs had trouble catching up. They managed to tie the set five times before finally taking their first lead at 15-14.

They wouldn’t trail again, but Rusk still wouldn’t go away, fighting them for every point until Timmons put an end to it with a kill.

“Rusk came out with more energy,” Stewart said of the third set, “and it took them a little by surprise. But they responded and picked up the win.”

Carthage had a good night attacking the Lady Eagles, as Kruebbe had 14 kills and Lewis added 12 more. Timmons had six kills, Baldree and Hodges both had five, Ja’Kyra Roberts had three and Smith had two.

“This was just a really good team effort and I’m proud of them,” Stewart said. “Faith had another big night, as did Makhia. Sadie did a really good job setting for everybody. She’s put in a lot of hard work and she’s getting better and better.

“Caroline and Taliyah had quiet big nights. And defensively, Talynn and Jaycee did a good job.”