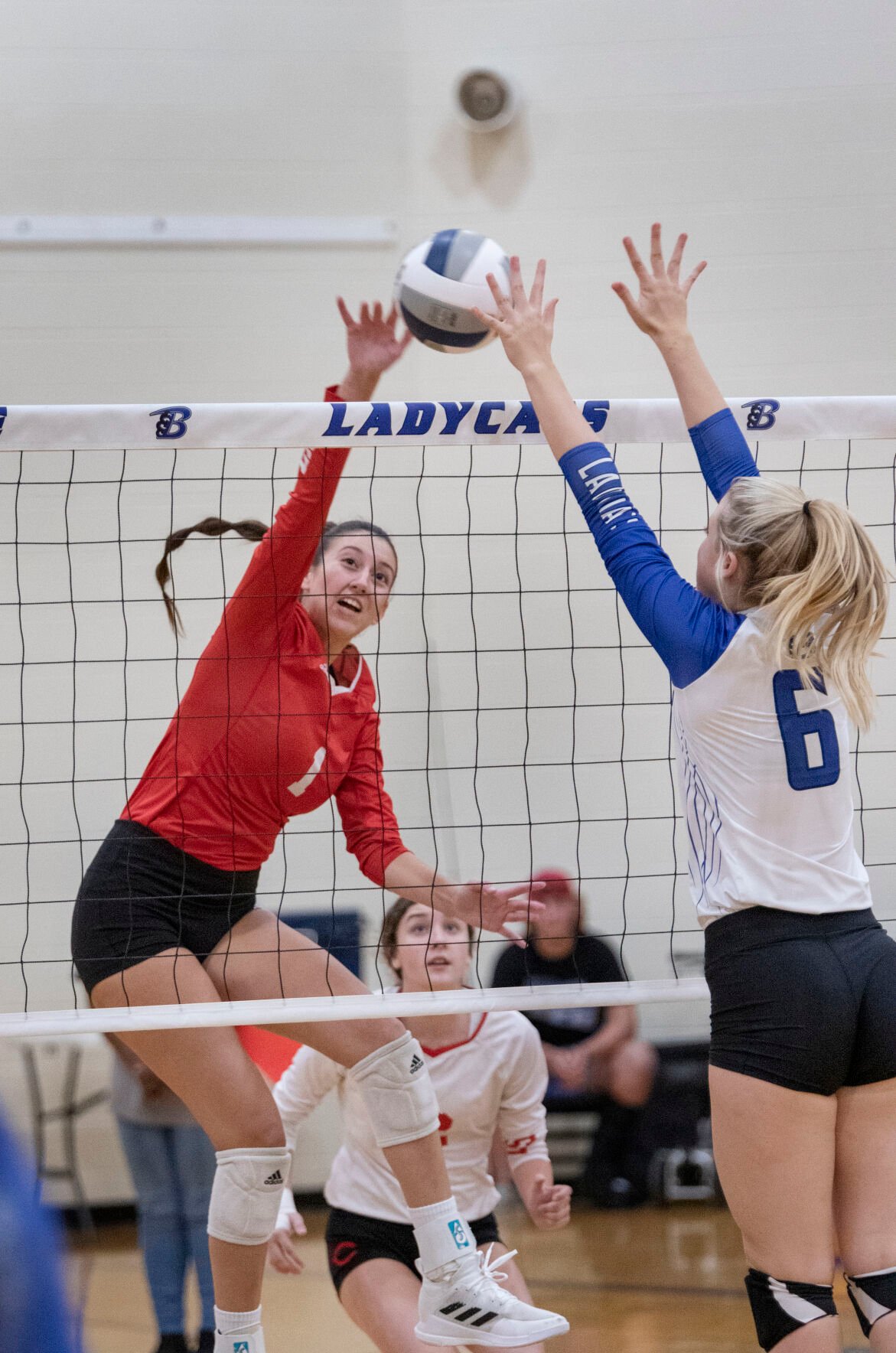 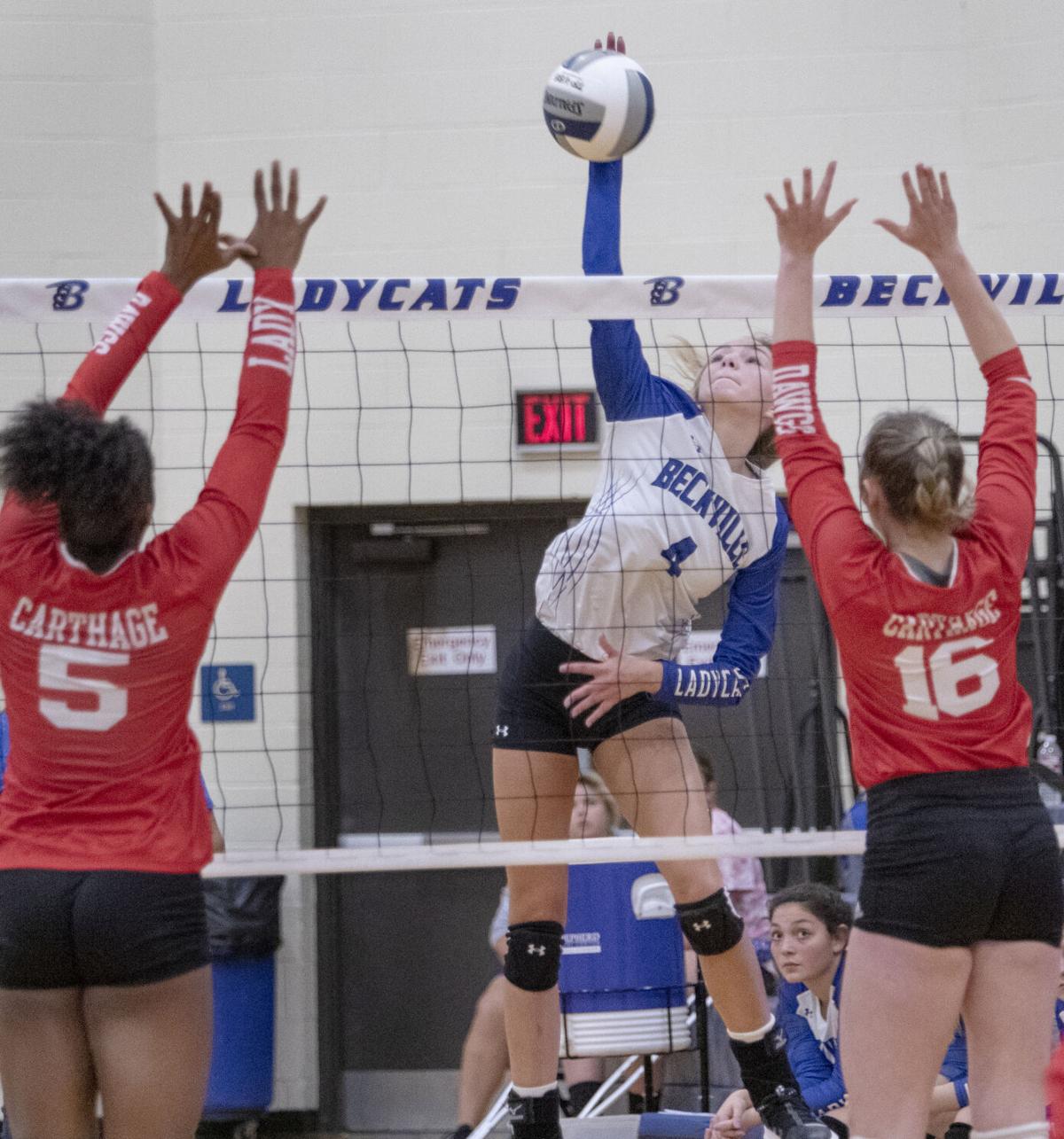 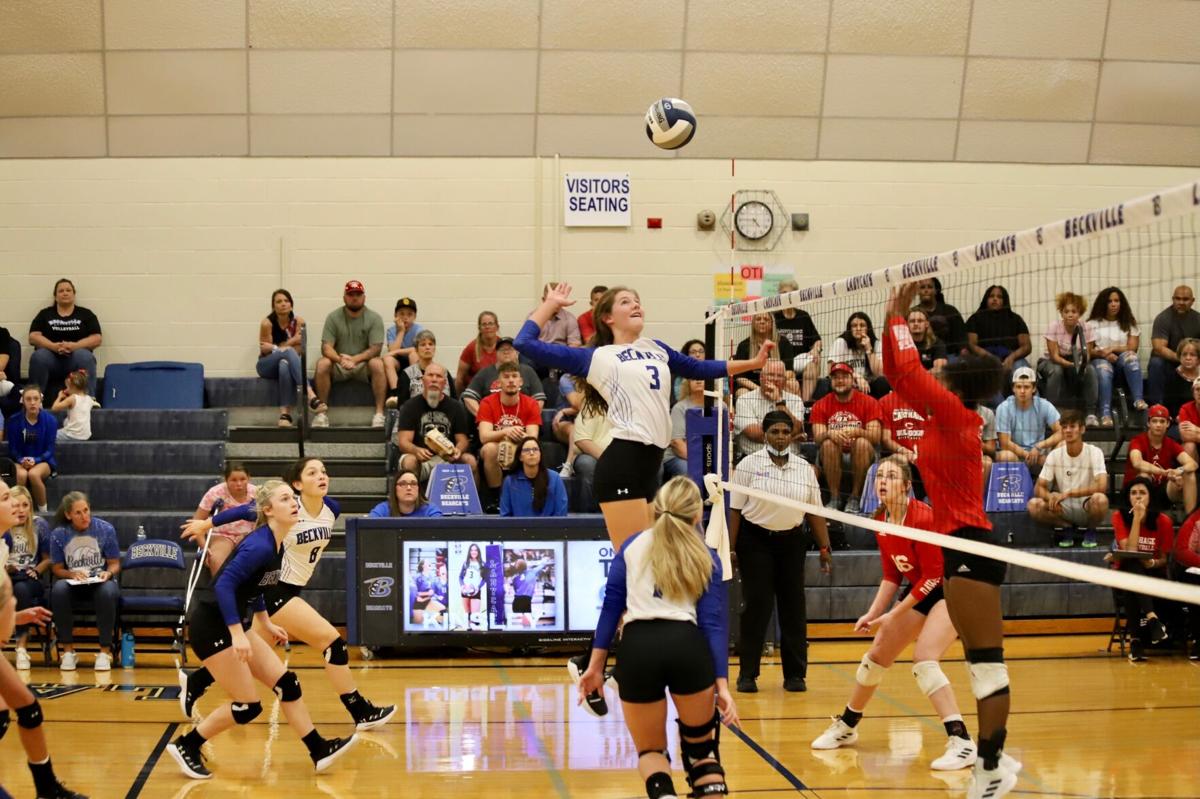 In a matchup that in all likelihood would be the toughest for both teams until the playoffs, the teams seesawed the first four sets until Beckville was able to put out the fifth and decisive set to defeat Carthage 23-25, 25-15, 19-25, 25-22, 15-10 in front of a raucous crowd.

Coming into the match, Beckville was ranked No. 2 in Class 2A and Carthage No. 9 in 4A in the latest Maxpreps.com Texas State rankings.

Coming into the match, neither the Ladycats nor Lady Dawgs had lost a full five set regulation match; all of their losses had come in tournaments.

Avery Morris had a match-high 18 kills and 19 digs to go along with three aces, Kinsley Rivers had 17 kills and 22 digs along with three blocks, and Amber Harris had 16 kills and 14 digs, while Sophie Elliott dished out 57 assists and had 21 digs to lead the way for the Ladycats.

Maddie McAfee and MJ Liles each had three kills, with McAfee adding 10 digs and Liles three; Laney Jones had nine digs, Karissa McDowell had six, and Aubrey Klingler had four for Beckville.

Faith Kruebbe led the Lady Dawgs with 16 kills, 21 digs and six assists, Makhai Lewis had 11 kills, Ja’Kyra Roberts had 10 kills and four blocks, while Sadie Smith dished out 41 assists and had six digs.

Erin Dodge had 22 digs and Talynn Williams had 15 digs for Carthage.

Luisa Hoffmann, Ana Melo and Andressa Soares each had four kills, with Soares adding 13 digs and Kristen Stewart added 11 digs for the Fillies — who made their 2021 debut in the NJCAA Division I national rankings this week.

Panola is ranked No. 18 in the country and improved 15-1 overall and 5-0 in conference play with Monday’s win.

Panola College volleyball competed in the CenTex Invitational at Temple College this past weekend.

Soares led the Fillies with a total of 40 kills. and Soares also contributed 38 digs, eight aces, and two blocks. Chavez had 31 kills, 20 digs, seven aces, and five blocks. Cole hit a total of 30 kills and added 10 digs and eight blocks.

Mattos dished out a total of 110 assists while also contributing 36 digs, six kills, three aces, and two blocks. Perez held off the opponent’s offense by collecting a total of 63 digs.

Both the Carthage and Beckville cross country teams competed in the Hallsville meet this past Saturday.

The Lady Bulldogs finished in 10th place out of 25 in the meet, with junior Sindi Salazar finishing as the top runner for Carthage in taking 31st out of 162 runners.

Lexi Barr finished in 63rd place to lead the Ladycats.

Beckville’s Justin Oliphant and Brody Downs competed as individuals and finished in 142 and 146 respectably in the boys race.