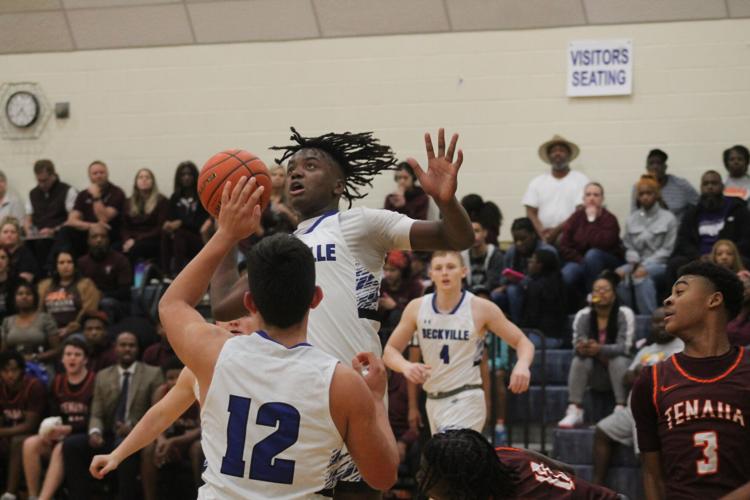 Beckville’s Jakelvin Smith pulls down one of his career high 27 rebounds in a District 23-2A game against Tenaha on Tuesday. 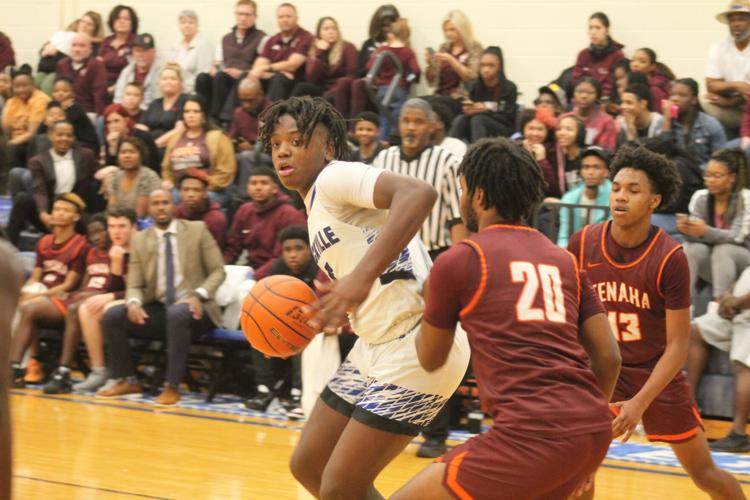 Beckville’s Jakelvin Smith posts up Tenaha’s Jordan Reese in a District 23-2A basketball game on Tuesday at Beckville High School. 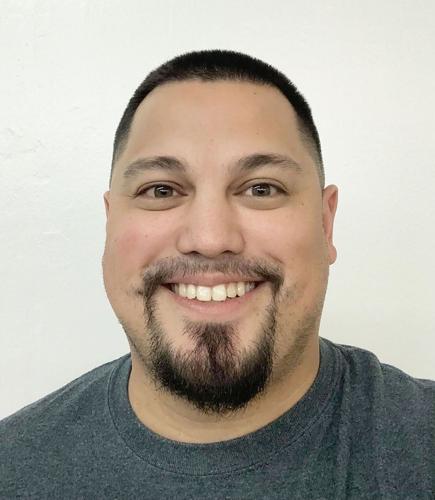 Beckville’s Jakelvin Smith pulls down one of his career high 27 rebounds in a District 23-2A game against Tenaha on Tuesday.

Beckville’s Jakelvin Smith posts up Tenaha’s Jordan Reese in a District 23-2A basketball game on Tuesday at Beckville High School.

In a game where J’Koby Williams scored a game-high 28 points, it was actually one of his teammates that had the standout performance.

That came from junior forward Jakelvin Smith, who posted a double-double of 16 points and 27 rebounds — yes 27 rebounds — to go along with four blocks and a pair of steals.

Smith a 6-foot-4 forward, was very surprised when hearing his rebounding total after Beckville defeated Tenaha 62-47 in a District 23-2A game on Tuesday.

“That’s astonishing for me,” Smith said. “I thought I did real good for my team coming out with the win on rebounds.”

Smith scored 14 of his 16 points in the second half and was a force on both sides of the floor in the paint. The junior had 12 offensive and 15 defensive rebounds in the game.

The junior was a starter on last year’s Beckville team that made it to the 2A Region III title game but often got lost in the mix or in foul trouble, negating his impact on the game.

That has changed this season, especially going into games where Williams garners so much attention.

“Jakelvin has really come on,” Beckvile Coach Tim Ender said. “Gotten better and better as the season has gone on, and the kids are starting to trust him more and more with the ball once they give it to him inside.”

Smith’s teammates look to get him the ball inside because they trust him with the ball in his hands. On the defensive end, he’s the back line of defense that enables guards like Williams, Jorden Prince and Jayden Mojica to play tighter up front knowing Smith is back their protecting the paint.

After Smith’s 27-rebound performance, his teammates gave him his praise.

“Just a great game and a great player,” Williams said. “We’ve been practicing rebounding in practice with him JT (Smith) and other bigs on the boards.”

Without Smith, there was a legit possibility that the Bearcats don’t win against the Tigers. Beckville needed the win if they wanted any realistic chance of catching Timpson for the District 23-2A title.

Smith out-rebounded Tenaha by himself as the Tigers finished with 26 combined as a team.

In a game where so many points were scored in the paint, there was somebody who needed to do the dirty work — and that was Smith.

Ender says that Smith has just scratched the surface of what he’s capable of.

Ever since losing their district opener against Timpson back on Dec. 20, Beckville has won four-straight district games following Tuesday’s win over Tenaha.

The Tigers are tied for fourth in a solid district, which made Smith’s rebounding performance stand out so much. It’s not like Smith was simply bodying the runt of the litter; he was snatching rebounds from two and three guys at a time.

Beckville knows what they’ll get from Williams on a nightly basis, and if Smith as well as the likes of Prince, Mojica and fellow bigs JT Smith and Austin Berry can perform, Beckville will continue to have success.

Smith’s rebounding clinic was a sight to see. Regardless of whether it was him gathering the ball and going up for a put back, volley balling it two or three times to himself to grab possession or simply snatching it out of the air, it was incredible.

The junior was simply happy to help his team win the game, putting up a 27-rebound performance in a win at home made all of his teammates and the Beckville fans even happier.