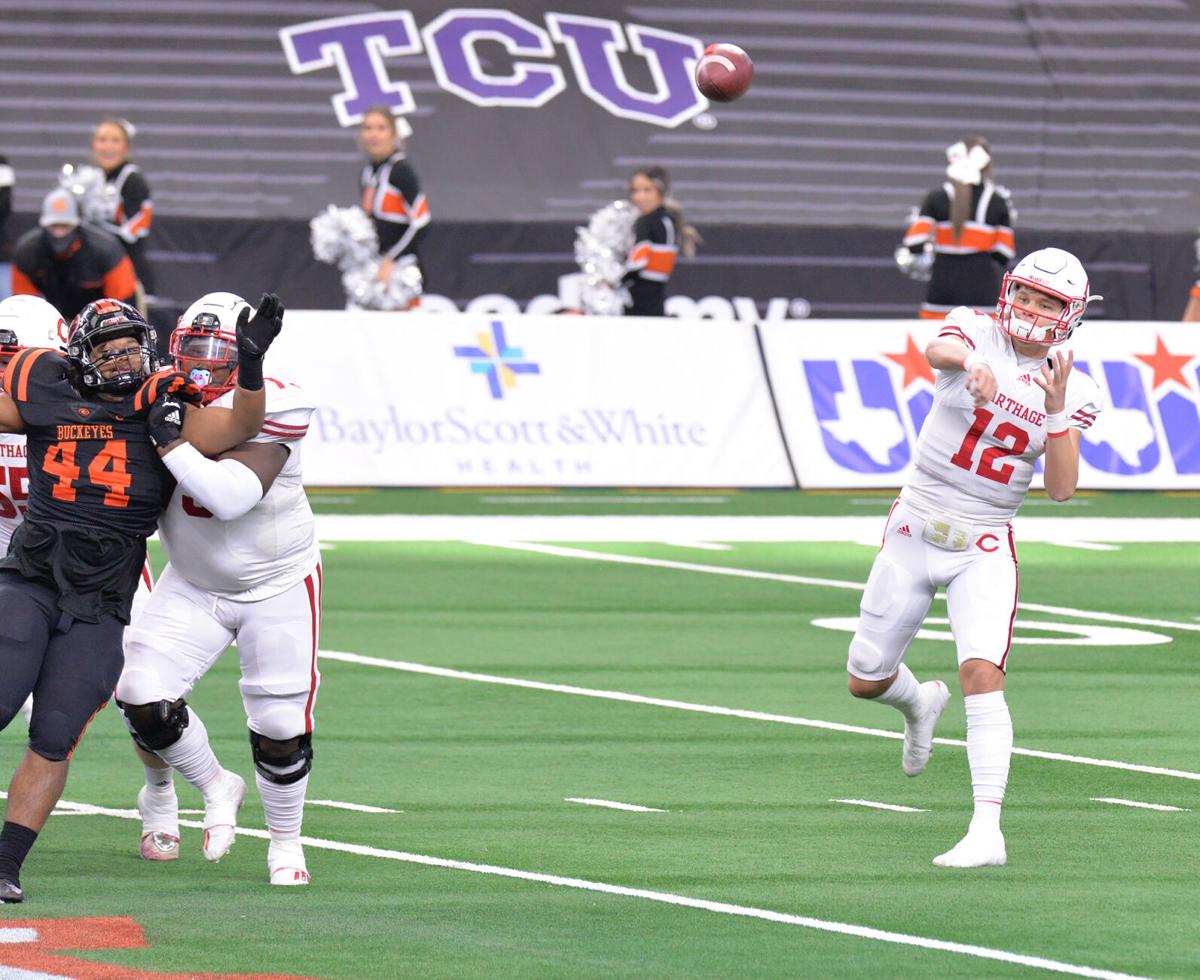 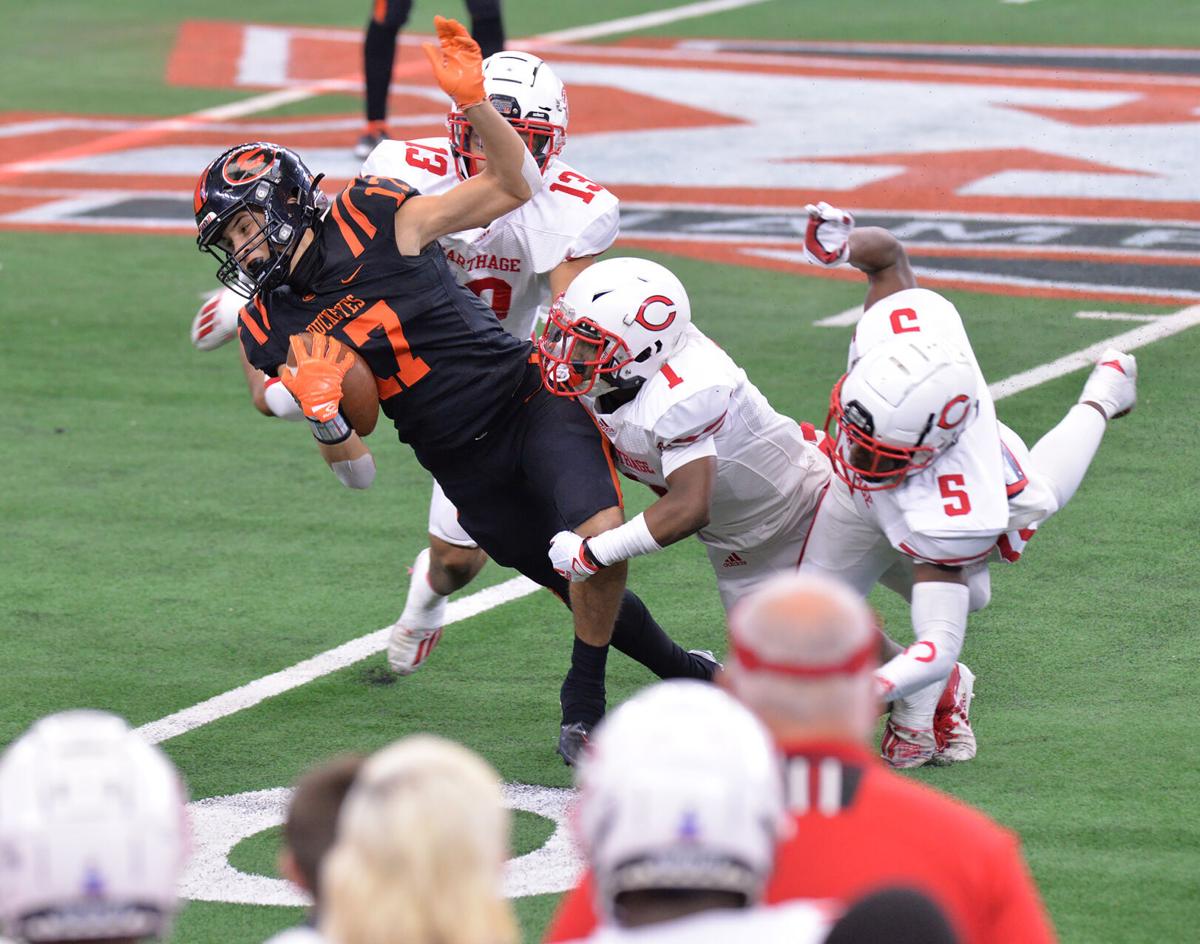 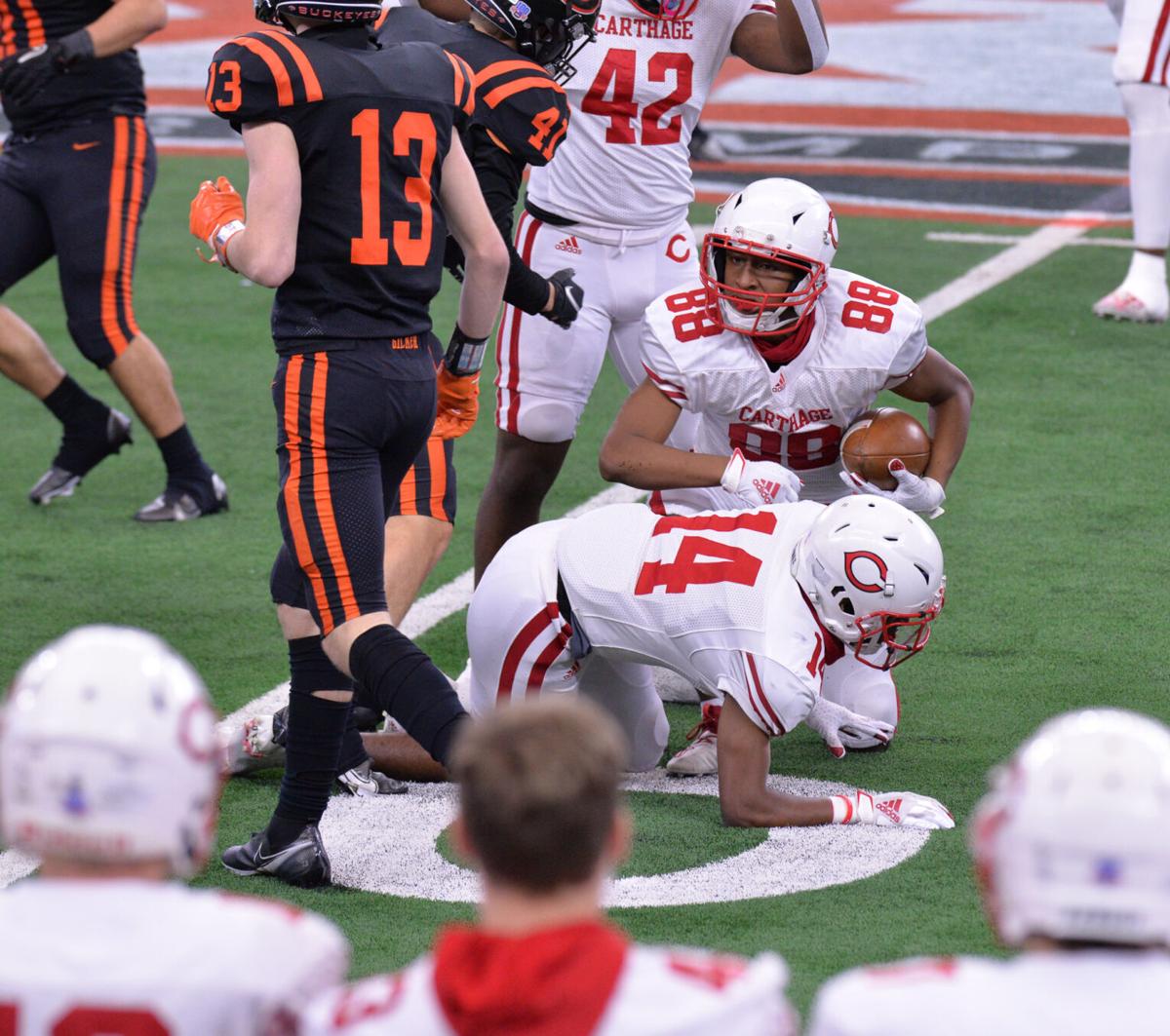 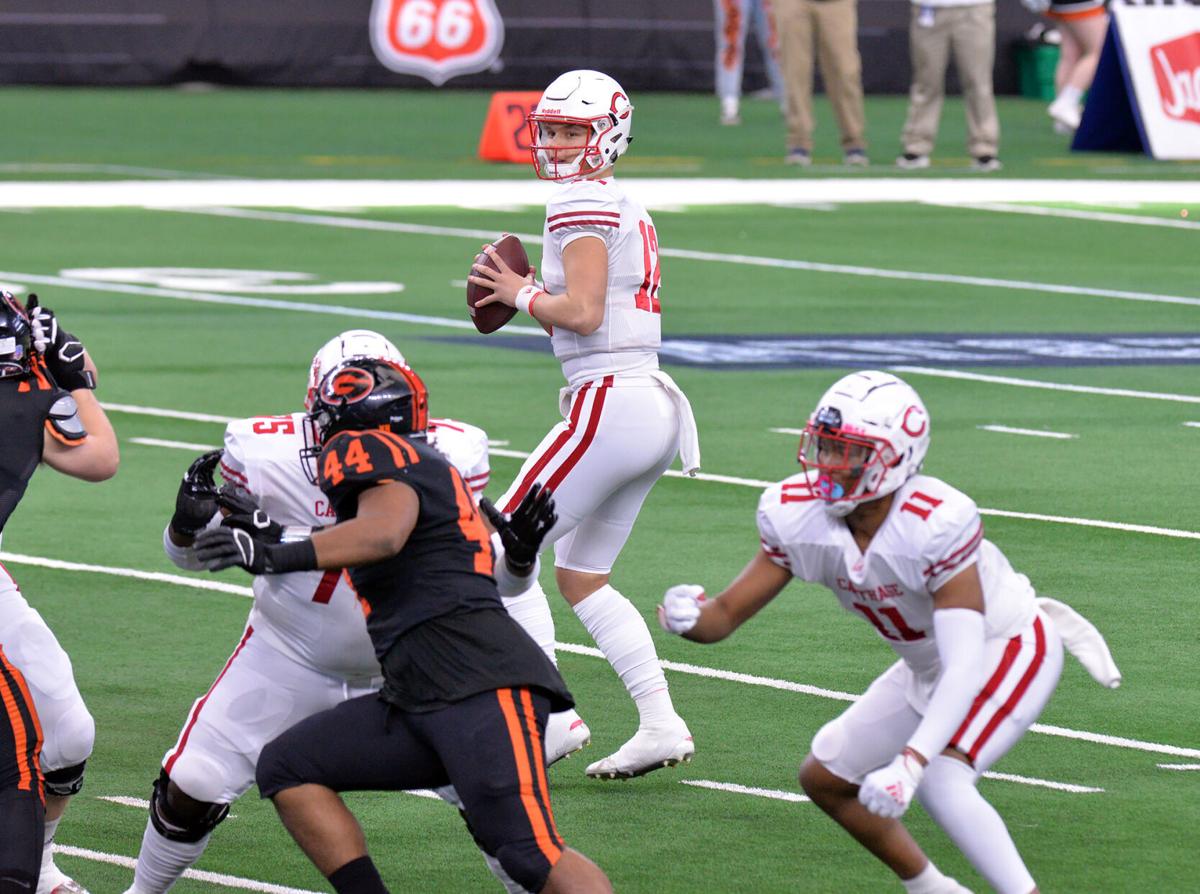 Carthage quarterback Kai Horton (12) has plenty of time to look for a receiver as Tee Kellum (75), Montrell Smith (11) and the rest of the offensive line holds out the Gilmer Buckeyes in Friday’s state title game. Horton threw for 243 yards and three TDs in the 70-14 win. 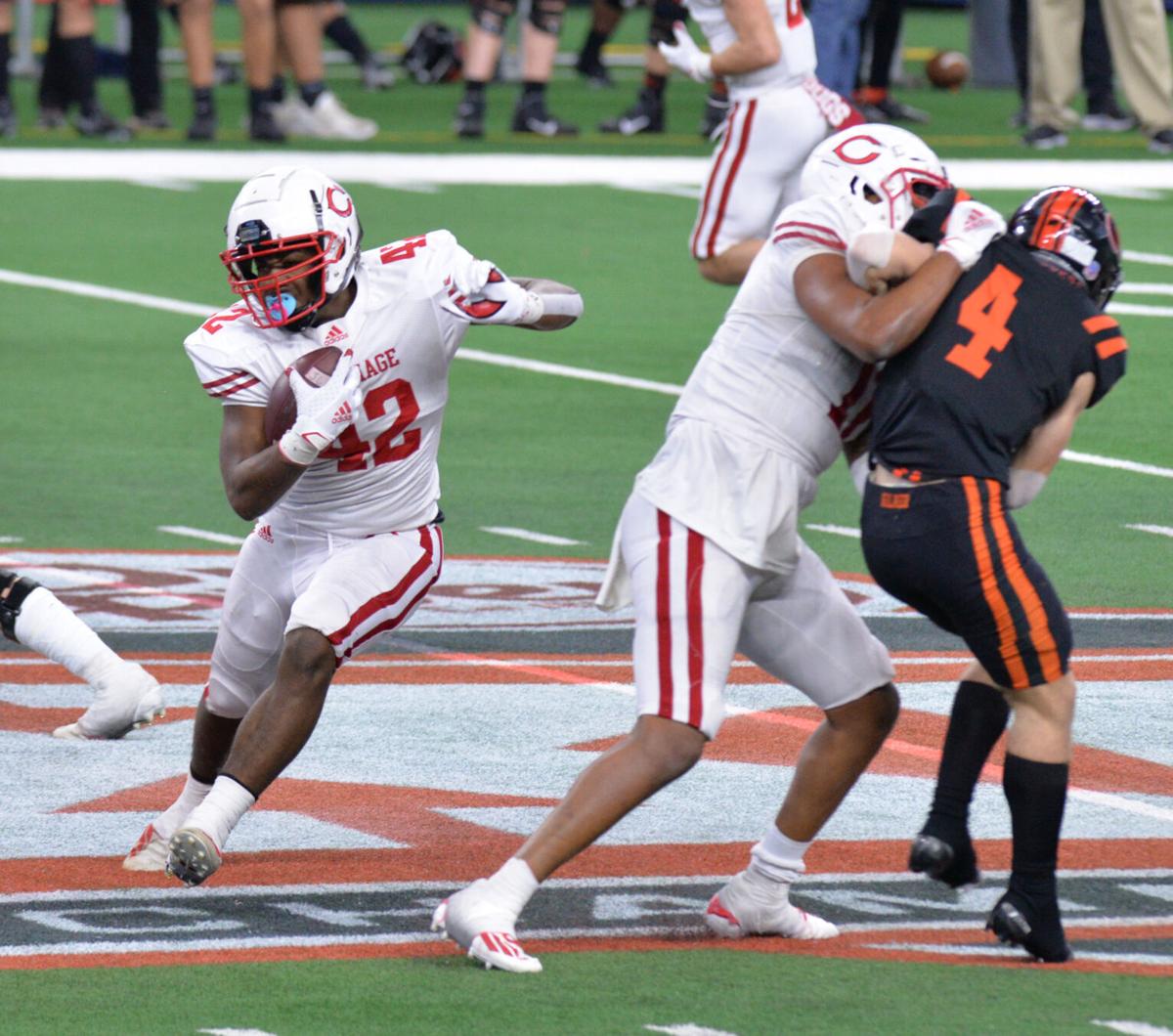 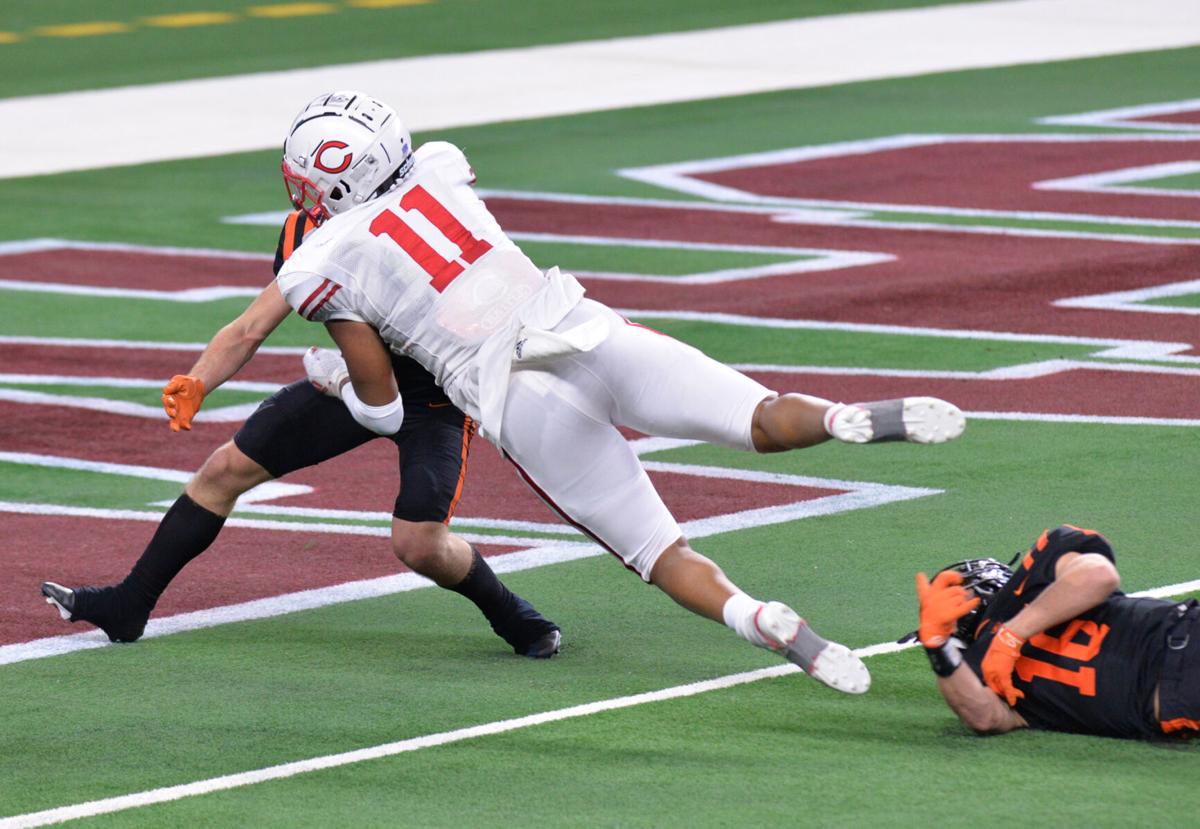 Carthage quarterback Kai Horton (12) has plenty of time to look for a receiver as Tee Kellum (75), Montrell Smith (11) and the rest of the offensive line holds out the Gilmer Buckeyes in Friday’s state title game. Horton threw for 243 yards and three TDs in the 70-14 win.

It didn’t take long for the talking to start last Friday night in Arlington.

In fact, the Fox Sports Southwest announcers were already talking about the possibilities before the games were even over.

“Who would win if the two teams played for the outright Class 4A crown?”

It would be a good game — the best game the Bulldogs would have played all year — but I don’t think it will ever happen.

You’re really asking too much of the kids to play a 16-game schedule to be state champions and then you tell them they have to play one more game to be the real state champions.

After their respective state title games, the teams would stay in Austin for another two days and play for the Texas Cup.

That lasted for five years before it was discontinued.

While some of the fans may have liked it, the coaches didn’t.

Both teams were considered state champions, but it takes some of the luster off your state title if you lose that second game.

Now asking “Who would win between the two Class 4A teams?” is another story.

I asked Carthage Coach Scott Surratt who he thought would win in a game between his team and Argyle.

He was very diplomatic with his answer and wouldn’t come right out and say it, but it was obvious that he thought the Dawgs would win.

He was also diplomatic before taking on Gilmer in the state title game. He knew he had the better team — and despite the slow start — they pretty much showed it.

After it was over he could praise his team.

“We settled down and Coach (Darren) Preston just turned up the heat,” Surratt said. “No adjustments, we were just missing a few plays. We knew they were going to come at us with all they had. We had to withstand that and we did.”

I, however, don’t have to be diplomatic.

I thought before they played Friday that it wouldn’t be close. Spotting them 14 points didn’t have me concerned at all — although I did know that Surratt would be mad when they let the Buckeyes recover the second onside kick attempt.

It wouldn’t be a blowout, but the Dawgs would beat the Eagles handily if the two state champions played.

Surratt also has to be diplomatic when he’s asked to compare his state title teams. It’s like asking a father of eight which kid he likes best.

He is on record saying that the 2008 team is special because it was the first one.

The 2020 one is also special just because of everything they had to do to get to play for the title.

“Winning in 2020 makes this one special to be honest cause it’s been a trying year,” he said. “For anybody to get a championship out of this year is really, really special. We knew we had the talent to be a good football team. We were fortunate to get this season in. There were some people who just wanted the season to get over with. But we didn’t want it to be over. We wanted to keep rolling on because we had a chance to do something special.

“Perseverance through the virus made this big. Having the coaches to get a football team through this mess as good as we were — they got them at the great level. I have great coaches and players that buy into our program. We’ve got great kids, a great community. Just the right fit and I’m the lucky one that I got the job 14 years ago.

“We weren’t just good — we were dominant.”

Greg Tepper of Dave Campbell’s Texas Football said several times on the air over the weekend that Scott Surratt is the best high school football coach in Texas.

That opinion is shared by many, including his quarterback.

“He’s the best coach in the state,” said Kai Horton. “I’m thankful to have him in my corner. He’s always had my back.”

One more question from Arlington:

“Can the Bulldogs three-peat?”

But with titles in 2019 and 2020, the Bulldogs are already thinking about it.

“I think we’re going to continue to win,” Surratt said. “I’ve got the best coaches and got the best players. We have a lot of guys coming back on defense and they could carry us early. We have some great coaches on offense and they have to replace a lot of guys, but we have some good candidates to do it. We also have to replace four senior kickers who did a phenomenal job.