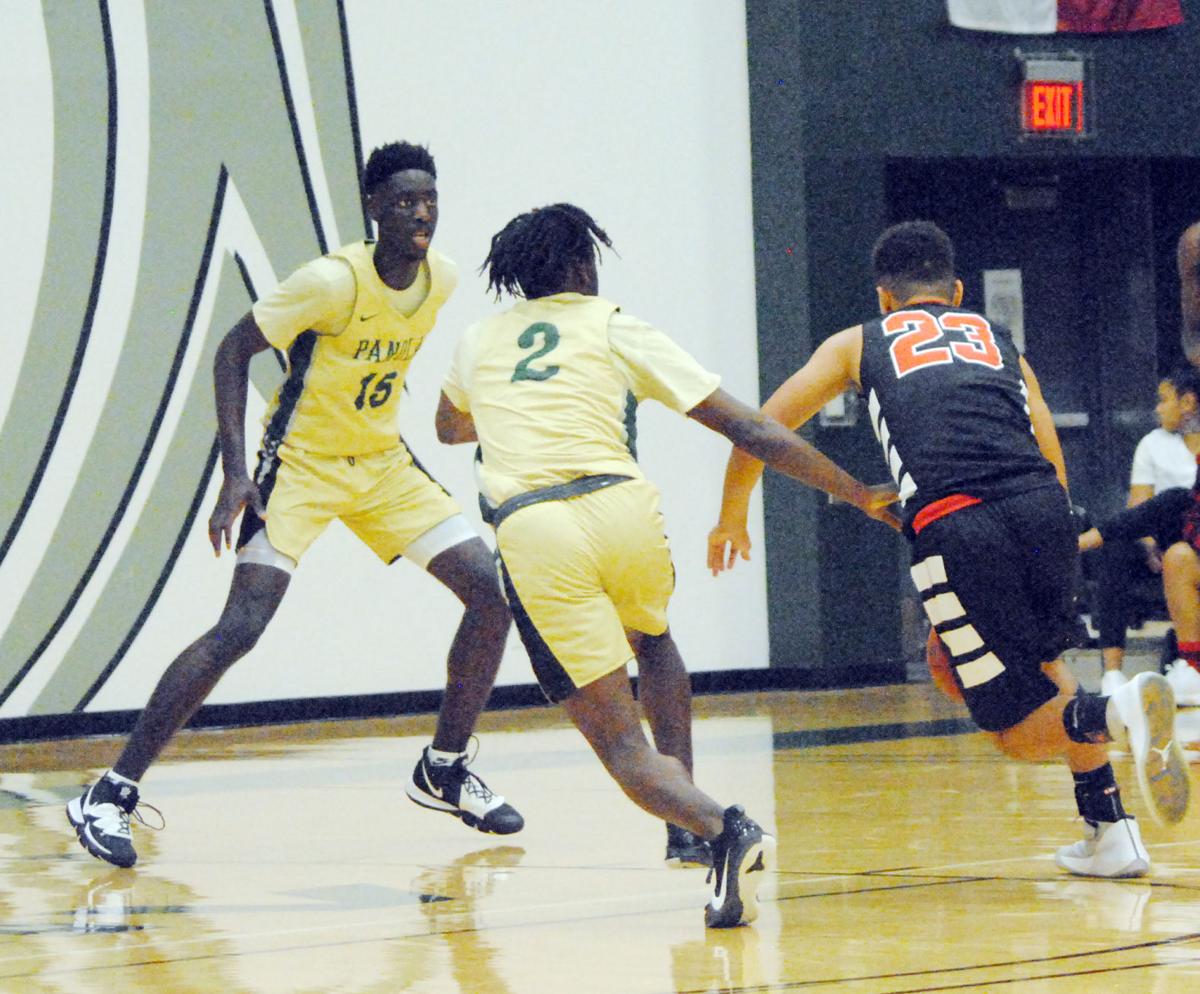 Donald Garrett (23) of Tribulation Prep gets around Panola’s La’Hiem Handy (2), but Jerrel Kelly (15) steps up to cut off his path to the basket. 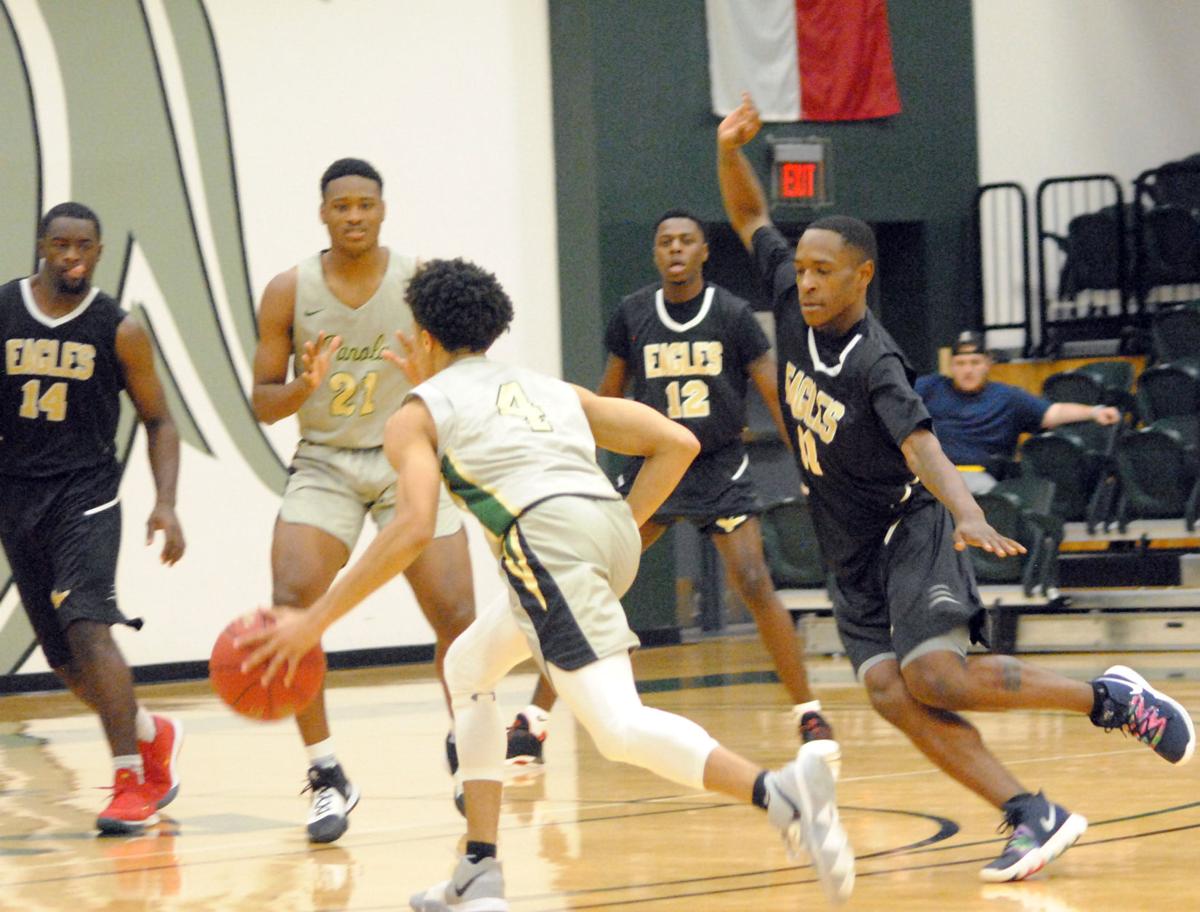 Panola College’s Cameron Carson (4) drives the lane looking for a teammate to pass to in an early season game against Houston Community College. The Ponies won 97-63 behind his 24-point effort.

Donald Garrett (23) of Tribulation Prep gets around Panola’s La’Hiem Handy (2), but Jerrel Kelly (15) steps up to cut off his path to the basket.

Panola College’s Cameron Carson (4) drives the lane looking for a teammate to pass to in an early season game against Houston Community College. The Ponies won 97-63 behind his 24-point effort.

Although you always need a rest over the course of a long season, the Christmas Break didn’t really hit at the right time for the Panola College Ponies.

They had won three straight, picked up three wins over nationally-ranked teams and had moved up to 15th in the national poll when they put the balls away and took their final exams for the first semester.

But now it’s time to get back to work with a little fresh meat thrown in front of them before they make their run toward possible postseason play.

The No. 15 Ponies are 11-2 for the season and 3-0 in NJCAA Region XIV as they took on the Houston Gladiators in a 4 p.m. non-conference win Saturday at Johnson Gym. The Ponies took a 102 86 win over the Gladiators when they played in November.

“After the first half, you always want to get your rest, but you don’t want your first games back to be against teams from your conference,” Panola Coach Aaron Smith said. “You want to have six days to to get ready for some of the toughest basketball games you’re going to have for the rest of the season.

“You need to have the stuff you were doing right, now working, and correct some of the things that were not working so well. We need to to shoot better from the free-throw line and do a better job taking care of the ball. It’s a cliche within the game, but we need to know who we are as a basketball team and how we can play the game best for four quarters.”

Smith would like to have settled on more of a starting lineup as injuries have prevented anyone from starting all 13 games with the exception of Stanton Rice (9.8 ppg.). Jermaine Drewery (13.5) and Christopher Coley (8.8) have both started 12, while Kelyn Pennie (13.1) Aaron Gedeon (8.4), have started more than half.

Kamari Brown (8.8) is the lone holdover from last year, Terry Ochieng (11.4) has started all five games he’s been available for and Cameron Carson has come off the bench for all but one games, yet is still averaging 13.2 points a game.

“That’s a definite spot we need to get better in,” Smith said. “I’d like to be more balanced scoring. It’s harder for a team with several players averaging around 9 or 10 points to guard.

“Going into conference so fast is also what makes it tough. Then having to play four games in eight days adds to that. But we knew it was coming and signed on for that. They’re playing everybody in the North twice. Hopefully everything will play out all right and we can be ready to play in February and March.

“Our guys are proud that the level of basketball they’re playing, it’s not a upset. Panola is really good.”

After Monday’s game against Lee, the Ponies don’t against Lee College at 7 p.m. Friday. Jan. 3.