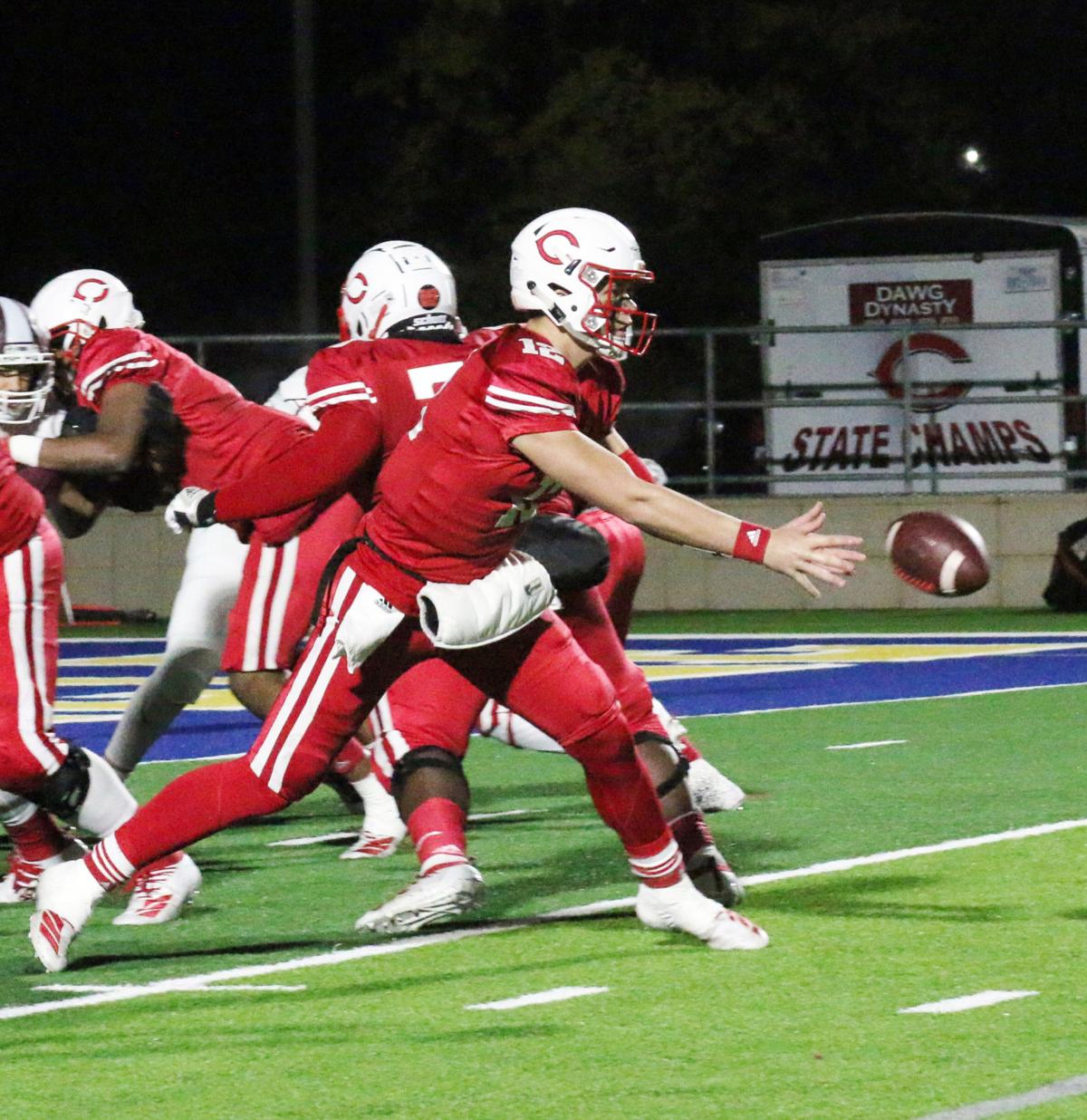 Carthage quarterback Kai Horton (12) makes a quick pitch to a running back during last week's bi-district game against Athens, a 49-14 Bulldog win, 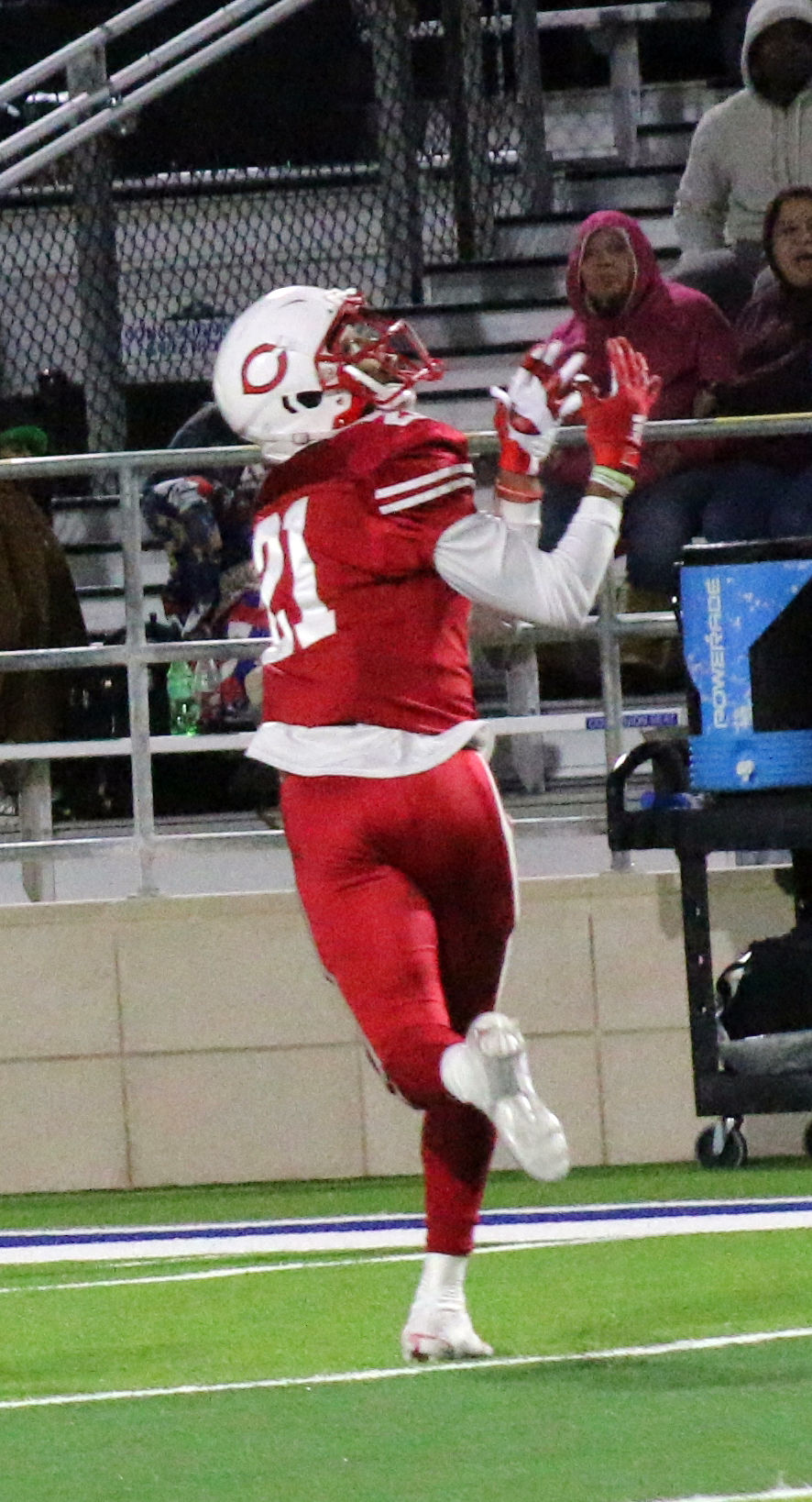 Carthage’s Mile Halton waits for the ball to arrive on his interception against Athens in the bi-district playoff game. The Bulldogs won 49-14.

Carthage quarterback Kai Horton (12) makes a quick pitch to a running back during last week's bi-district game against Athens, a 49-14 Bulldog win,

Carthage’s Mile Halton waits for the ball to arrive on his interception against Athens in the bi-district playoff game. The Bulldogs won 49-14.

JACKSONVILLE — The Carthage Bulldogs gave the Athens Hornets a mixed look at their offense Friday night at the Tomato Bowl.

The hard-nose running of Mason Courtney on the ground, while quarterback Kai Horton and his receivers showed them quite a bit of the passing game.

Courtney finished up with 156 hard-fought yards and a touchdown, Horton threw for 299 yards and four scores and the No. 4 Bulldogs made short work of the Hornet in the Region III-4A bi-district playoff game, 49-14.

The Dawgs improve to 11-0 with the win, while the Hornets finish at 6-5. Carthage will square off with Lumberton in the area round at 7 p.m. Friday in Lumberton.

“It was a pretty good performance,” Carthage Head Coach Scott Surratt said. “We came out attacking, but we might have been a little nervous. After that first series we played a lot better. We have to keep playing better as each game comes along if we want to be standing when it’s all said and done.

“Mason sets our playoff mentality. He’s got great feet and they’re always moving. He never stops. Kai’s hot right now, especially when he gets good protection. When he sits back there with time to throw we can be dangerous.”

The duo actually hooked up for the first score, but it was called back because of a blindside block. So Horton went to his favorite receiver of the night, hooking up with Kel Williams on a 30-yard touchdown on the next play.

Carthage’s pooch kick paid off on the ensuing kickoff as Jaden Thomas picked up the loose ball after the Hornets couldn’t handle it. After a short run by Courtney, Horton and Kelvontay Dixon combined for a 17-yard TD and a 14-0 lead.

The Hornets were successful with a little power football of their own with Nathan Sims getting into the secondary and taking several Bulldogs to bring him down.

He ended up scoring on an 18-yard run early in the second quarter to cut the lead to 14-7.

Rayvon Ingram scored on a 3-yard run that was was set up by a long pass to Williams.

Craig McNew got into the scoring act, catching a 17-yard TD from Horton late in the half.

A Javon King interception gave Carthage one more chance before the half.

What might have been the best play for both Courtney and Horton was wiped out by a penalty.

The running back caught the ball on a well-executed screen on the right side. He zigged and zagged through the Hornet defense and eventually broke free on the left side for what would have been a 61-yard touchdown. He probably covered more than 100 yards on the play.

The penalty had to be accepted so the Dawgs tried a Hail Mary pass into the end zone but came up short.

Courtney, who finished with 156 yards, finally got in the end zone in the third quarter to make it 35-7.

Athens got a 16-yard touchdown pass to Jerquindon Taylor from Chase Friedrich in the fourth quarter, but Horton hooked up with a wide-open Williams for a 45-yard touchdown. Thomas finished off the scoring, on a drive where he was the feature back, on a 1-yard run.

“It looked like they hurt us defensively at times, and they did score twice,” Surratt said. “But we were very physical, and when it was all over, they only had about 180 yards on us. The defense came through again.”