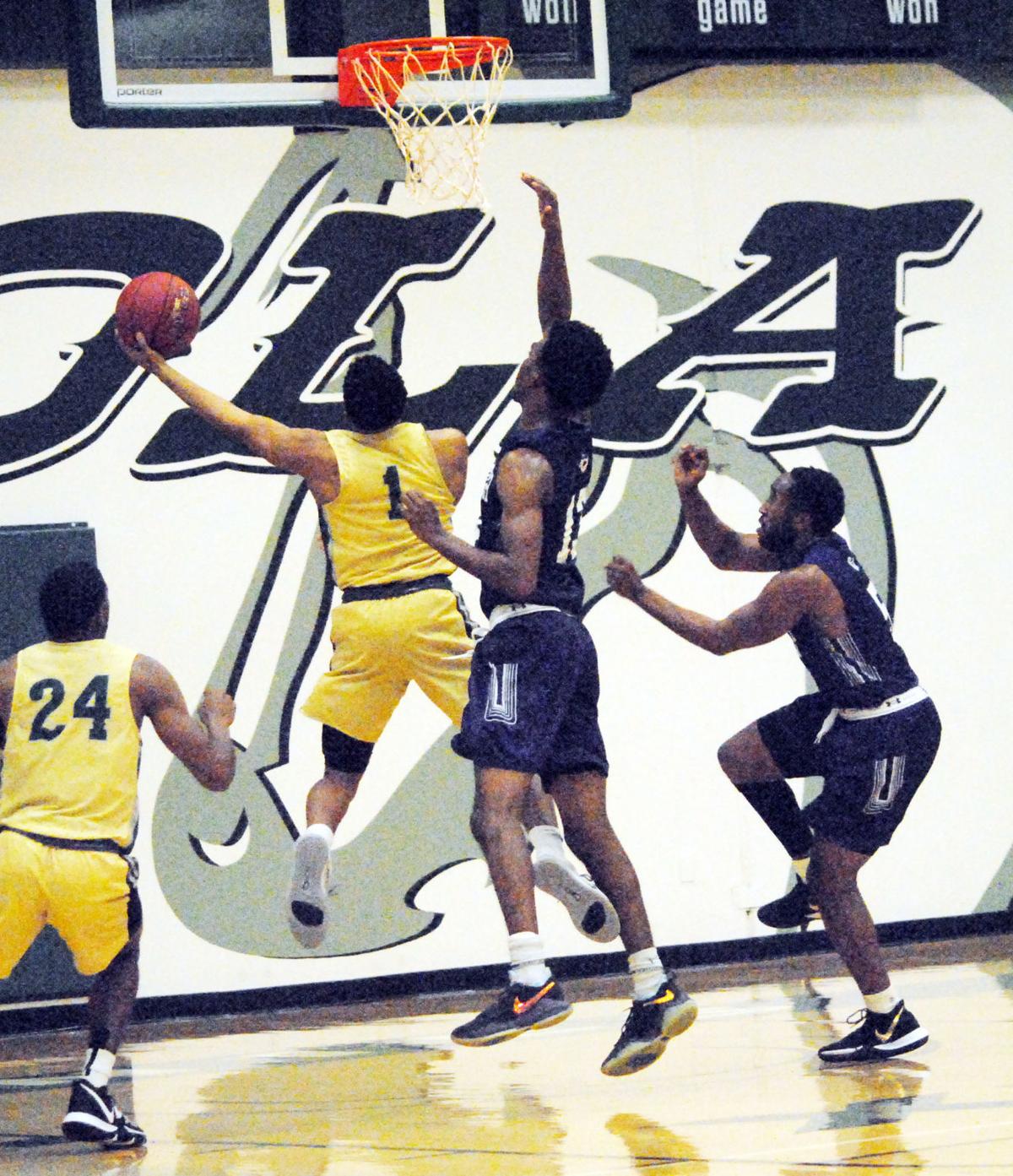 Panola College’s Kelyn Pennie (1) goes under the defender and shoots a layup in Monday night’s game against No. 1 Ranger College. 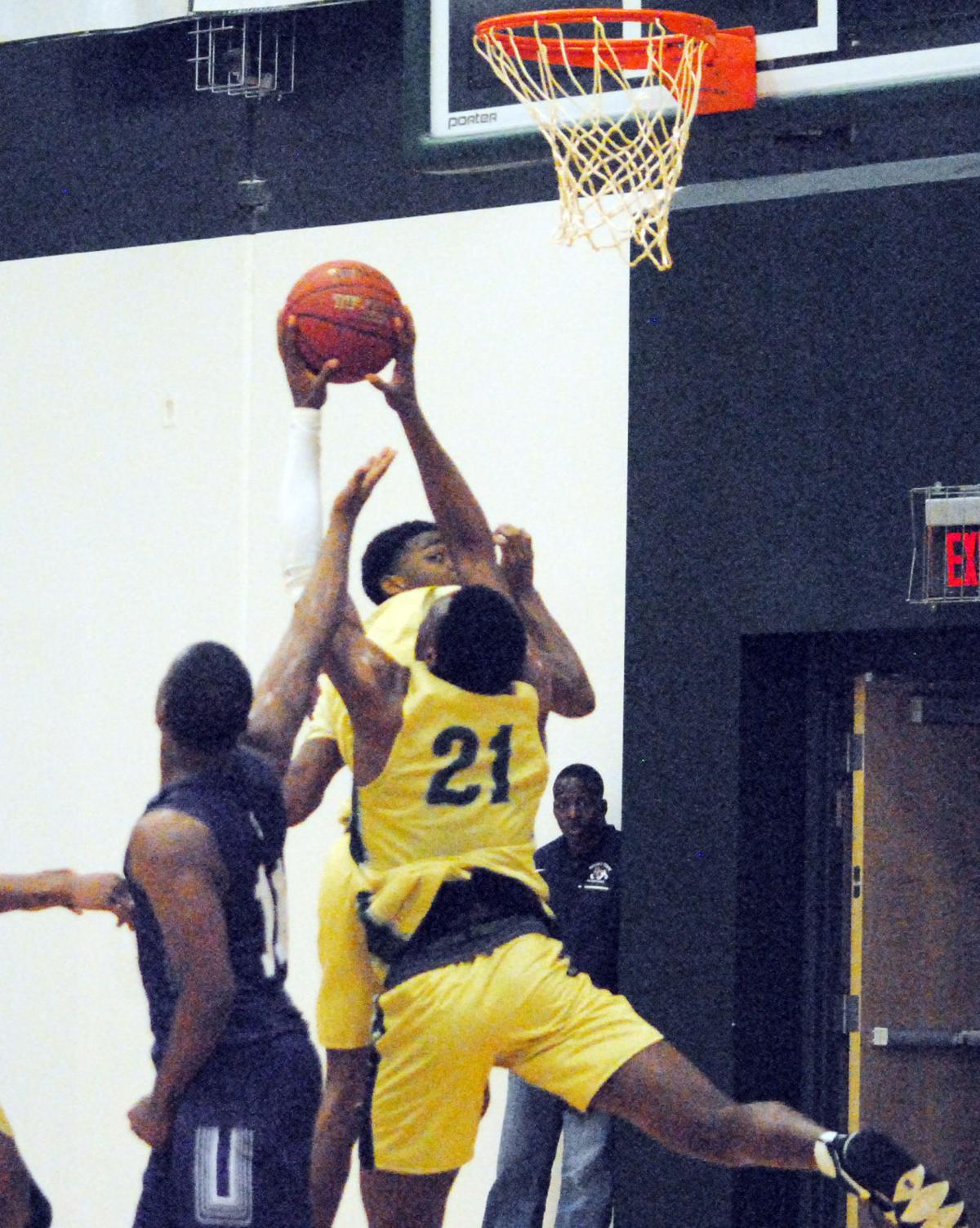 Panola’s Davian Sanders (21) fights inside for a rebound in Monday night’s game against top-ranked Ranger College.

Panola College’s Kelyn Pennie (1) goes under the defender and shoots a layup in Monday night’s game against No. 1 Ranger College.

Panola’s Davian Sanders (21) fights inside for a rebound in Monday night’s game against top-ranked Ranger College.

Knocking off three ranked team and earning a national ranking for yourself is one thing, taking on the No. 1 team in the nation is another.

Or so the No. 11 Panola College Ponies found out Monday night in the Arthur Johnson Gym.

No. 1 Ranger College used the long-range shooting skills of Keisei Tominaga to build a lead and never let the Ponies get closer than double-digits in taking an 81-65 non-conference win.

The Ponies drop to 8-2 for the season with the loss. They return to action Saturday with a 4 p.m. home game against Tribulation Prep.

Panola came into the game with wins over Odessa, Clarendon and South Plains College, who were all ranked nationally when they played the Ponies.

Things were different against the Rangers.

"We got out-coached and we got out-played," Panola Coach Aaron Smith said. "They're No. 1 in the country for a reason. Basketball is made up of runs, and they a great job of limiting their opponents' runs, while maximizing their own runs.

"They do a great job of that and they can hit their shots when they need to. They just beat us."

Tominaga hit an early 3 and Kelyn Pennie hit a 3-pointer of his own to pull the Ponies within five, 12-7. The Rangers would run off six straight, give up back-to-back baskets and then take off again.

Tominaga drained three straight 3-pointers and the lead was up to 29-12. The Ponies fought back with scoring from Kamari Brown, Jermaine Drewey and Jerrel Kelly only to see the Rangers take a 49-29 lead at the half.

Stanton Rose and Cameron Carson finished off a 10-1 run early in the second half with 3-pointers as the Ponies closed to 52-41 with 14:46 left.

But the Rangers never let the home team get the lead down to single digits and used a passing delay game to take time off the clock.

Tominga led all scorers with 29 points, including eight 3-pointers, while Ranger College also got 18 from Montre Gipson, while C.J. Roberts and Shakur Daniel both had 10.

Pennie had 12 to lead Panola followed by Rose with 11, Drewey with eight, Davian Sanders with seven, and Kelly, Carson and Brown with six each.

"We're not good enough today to beat the No. 1 team," Smith said. "But we can't wait until March to get there, we need to get there when conference really takes off in January. We have a ways to go, but not so far that we can't get there.

"We didn't do a good job executing our game plan, so 30 (Tominaga) got too many good looks. It was a shame we got so far behind there in the first."