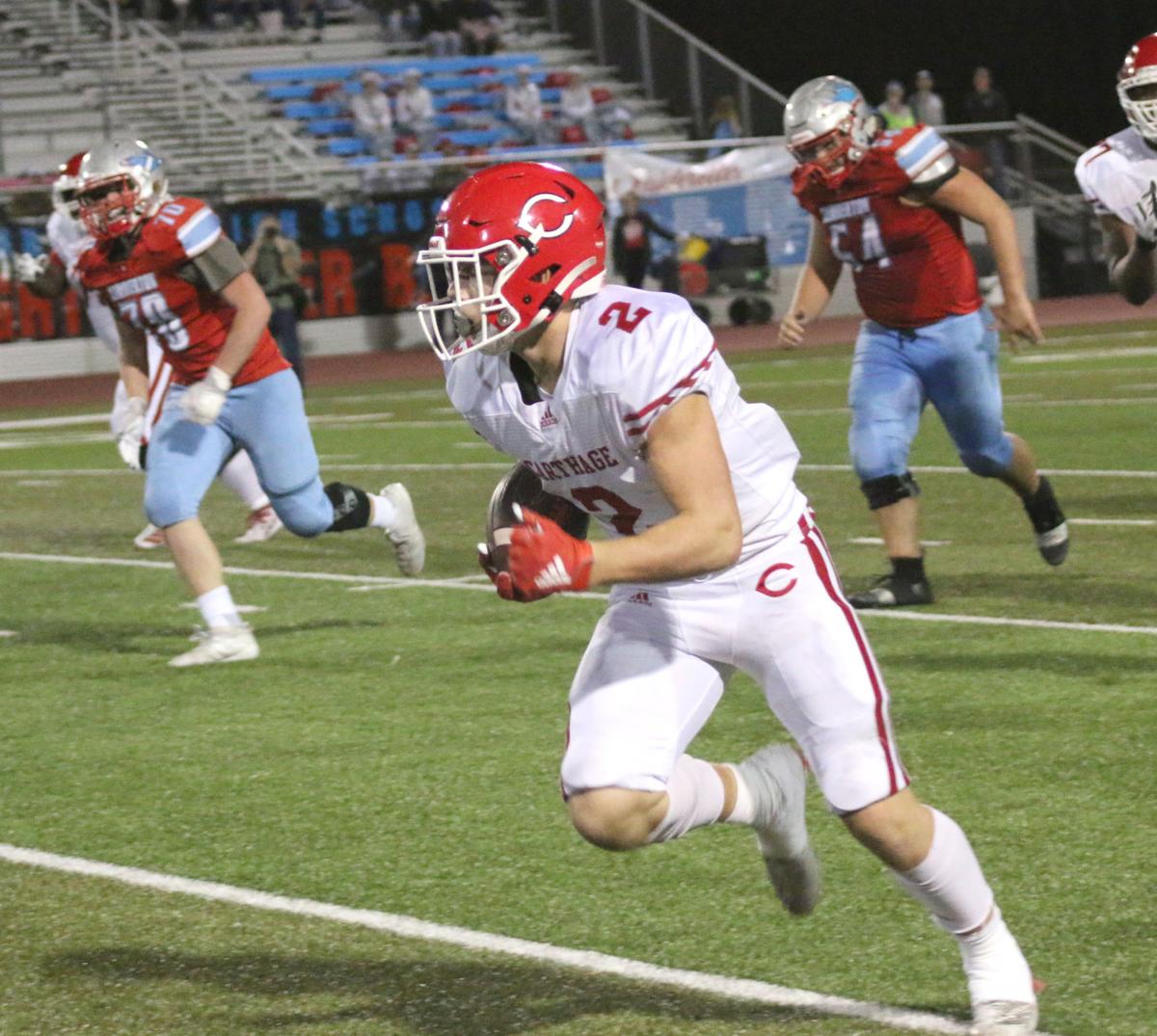 Carthage running back Mason Courtney (2) takes off up the sideline after catching a pass. Courtney rushed for 70 yards and two TDS in the Bulldogs’ 55-17 win. 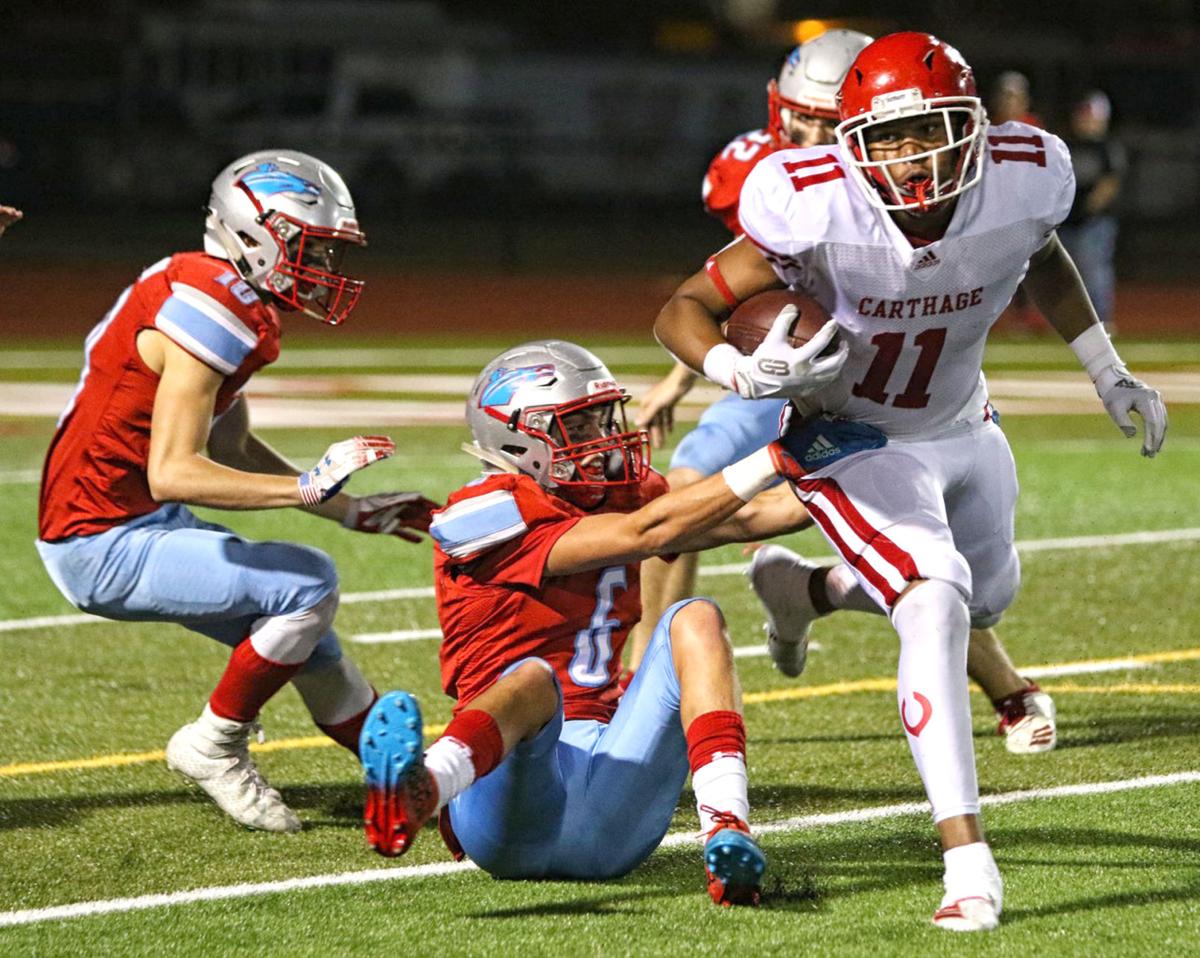 Carthage’s Montrell Smith (11) tries to pull away from the Lumberton defenders after catching a short pass. Smith caught two passes — one for a touchdown — in the Bulldogs’ 55-17 win. 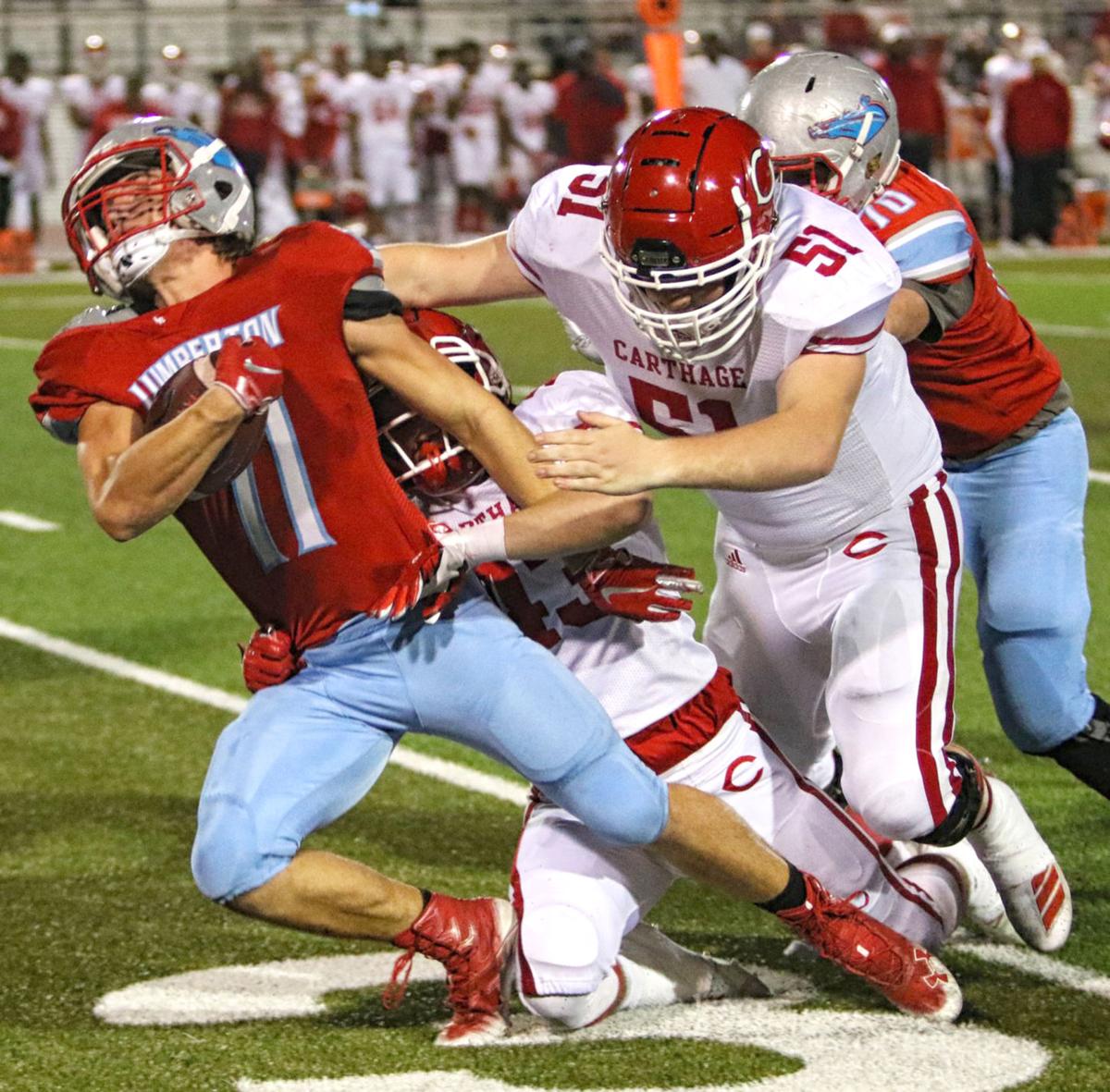 The Lumberton running back stretches for extra yards, but Carthage’s Si Schumacher (43) and Connor Davis (51) bearing him down from behind in the 55-17 playoff win.

Carthage running back Mason Courtney (2) takes off up the sideline after catching a pass. Courtney rushed for 70 yards and two TDS in the Bulldogs’ 55-17 win.

Carthage’s Montrell Smith (11) tries to pull away from the Lumberton defenders after catching a short pass. Smith caught two passes — one for a touchdown — in the Bulldogs’ 55-17 win.

The Lumberton running back stretches for extra yards, but Carthage’s Si Schumacher (43) and Connor Davis (51) bearing him down from behind in the 55-17 playoff win.

LUMBERTON — The total offense numbers were a little down at halftime for both the No. 2 Carthage Bulldogs and the Lumberton Raiders Friday night at Raider Stadium.

The Raiders, because they weren’t able to move the ball that much and they lost a lot of yardage with bad punt snaps and a long quarterback sack.

The Bulldogs, because they only had to cover 23 yards to pick up two of their first three scores.

Despite playing without two key starters, Carthage opened it up a bit more in the second half, including a pair of touchdowns from down on the depth chart, to roll to a commanding 55-17 win over the Raiders in the Region III-4A area playoff game.

The Bulldogs are now 12-0 for the season and will advance to face Crandall (10-2) at Rose Stadium in Tyler at 5 p.m. Friday in the Region III-4A quarterfinals.

“We were excited to get down there and play,” Carthage Coach Scott Surratt said. “The defense played well and the offense was pretty sharp. We got those two bad punt snaps, and we kind of steamrolled them from there.

“I thought we got better as the game went on. The main thing is we won and we correct our mistakes as we go.”

The first Carthage drive was of normal length (65 yards) and culminated with a 24-yard TD pass from Kai Horton to Kel Williams — although Williams did have it stripped and had to recover it in the end zone for the score.

A QB sack for a 17-yard loss by Mason Bobo and a bad snap on the punt gave Carthage the ball at the 4.

A bad snap that Desmund Hicks recovered at the 19, started the next drive and it ended the same way with Courtney, who finished with 70 yards rushing, going in from the 1.

But Brennan Phillips’ PAT was blocked to make it a 20-0 lead.

Lumberton was able to take advantage of another Carthage miscue, taking over at the 25 after a Bulldog fumble. Ryan Koch scored from the 18, busting several tackles along the way.

Carthage led 27-7 at the half as Horton hooked up with Montrell Smith on a 3-yard scoring pass.

A 3-and-out by the Bulldog defense early in the second half turned into a Braeden Wade 25-yard touchdown pass from Horton.

Another bad punt snap turned into an 18-yard loss and paved the way for a 35-yard touchdown pass to Williams, his second, from Horton, his fourth to make it a 41-7 lead.

“I really liked the crispness of the offense,” Surratt said. “The offensive line played really well. Montrell Smith, our tight end, was the offensive MVP for the game and Ty’Kiest Crawford, at tackle, was the Most Valuable offensive linemen and may have played his last game. We also threw it and caught it well.

The Raiders put together the best drive of the night after that to get back on the scoreboard. They covered 70 yards in 11 plays, with Drake Boykin scoring on a 1-yard run to make it 41-14.

The Bulldogs may have been through, but there was still a quarter left to play.

So backup QB Anthony Wilson hooked up with Daivota Duncan for a 5-yard touchdown to make it 48-14 with 11:15 left, and Kavonte Brown-Hoskins closed out Carthage’s scoring with an 18-yard run.

It wasn’t the end of the scoring, however, as the Raiders used the two-minute drill to drive deep into the Red Zone and put up a 21-yard field goal by Adam Sellers at the buzzer.

Carthage ended up with 133 yards rushing and its three quarterbacks combined to go 16-23-1 for 248 yards and five touchdowns.

Horton finished with his 209 yards passing, completing 11 of 17 with no interceptions and four touchdowns. Williams caught four for 74, Wade caught three for 60, Damarian Delaney caught two for 19, Smith caught two for eight and Courtney caught one for 24 yards.

The Raiders finished with 168 yards — all on the ground — and only averaged a little better than 2 1/2 yards a carry.

Jai Brazier led the defense with 21 tackles, while Quinton Owens and J.R. Tuiel both had 10, Hicks and Cole Whitlock both had eight and Kylon Lister had seven.

“The defense stopped the run, and that was the key,” Surratt said. “Brazier had 21 tackles and really stepped in for Rayvon (Ingram). He earned himself a lot of playing time with his performance.”