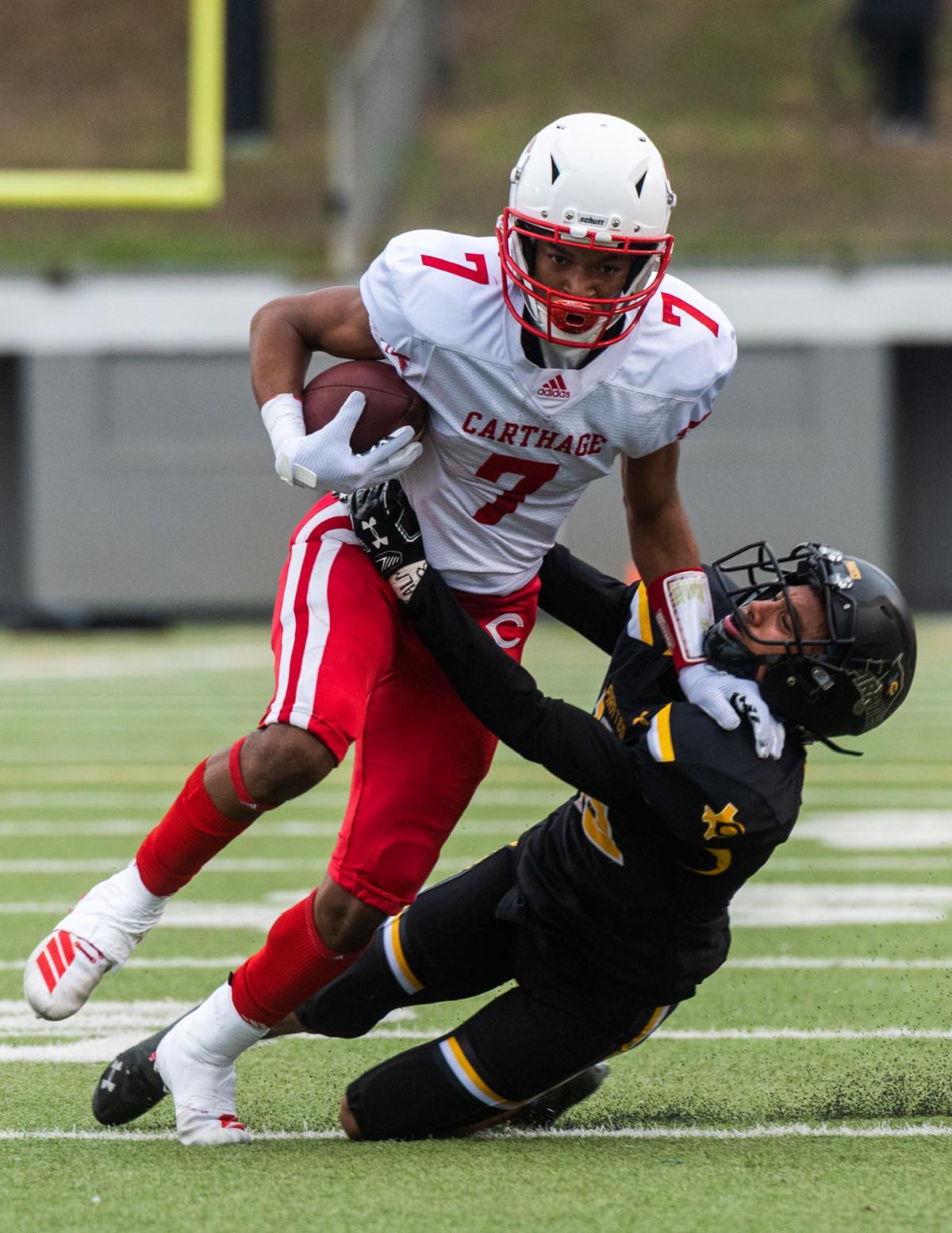 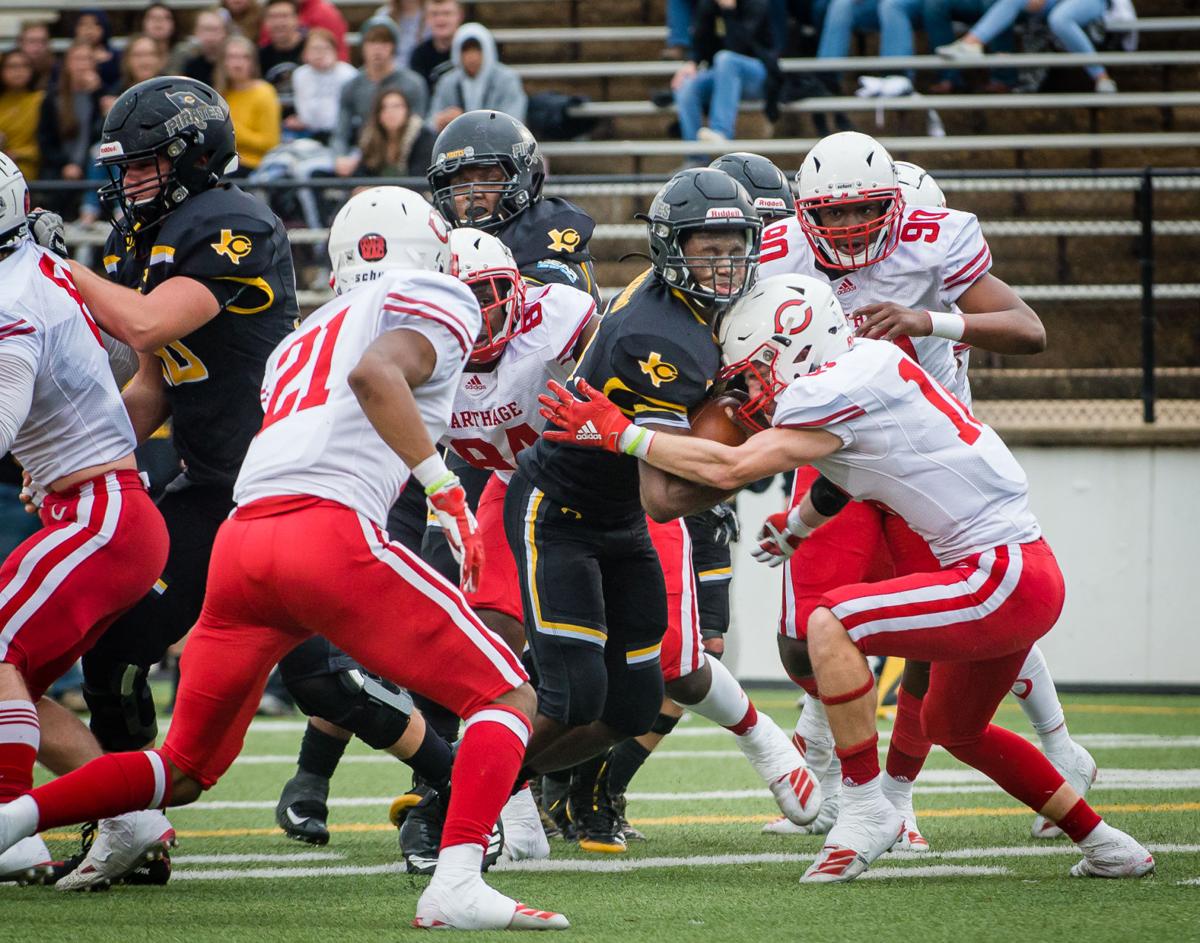 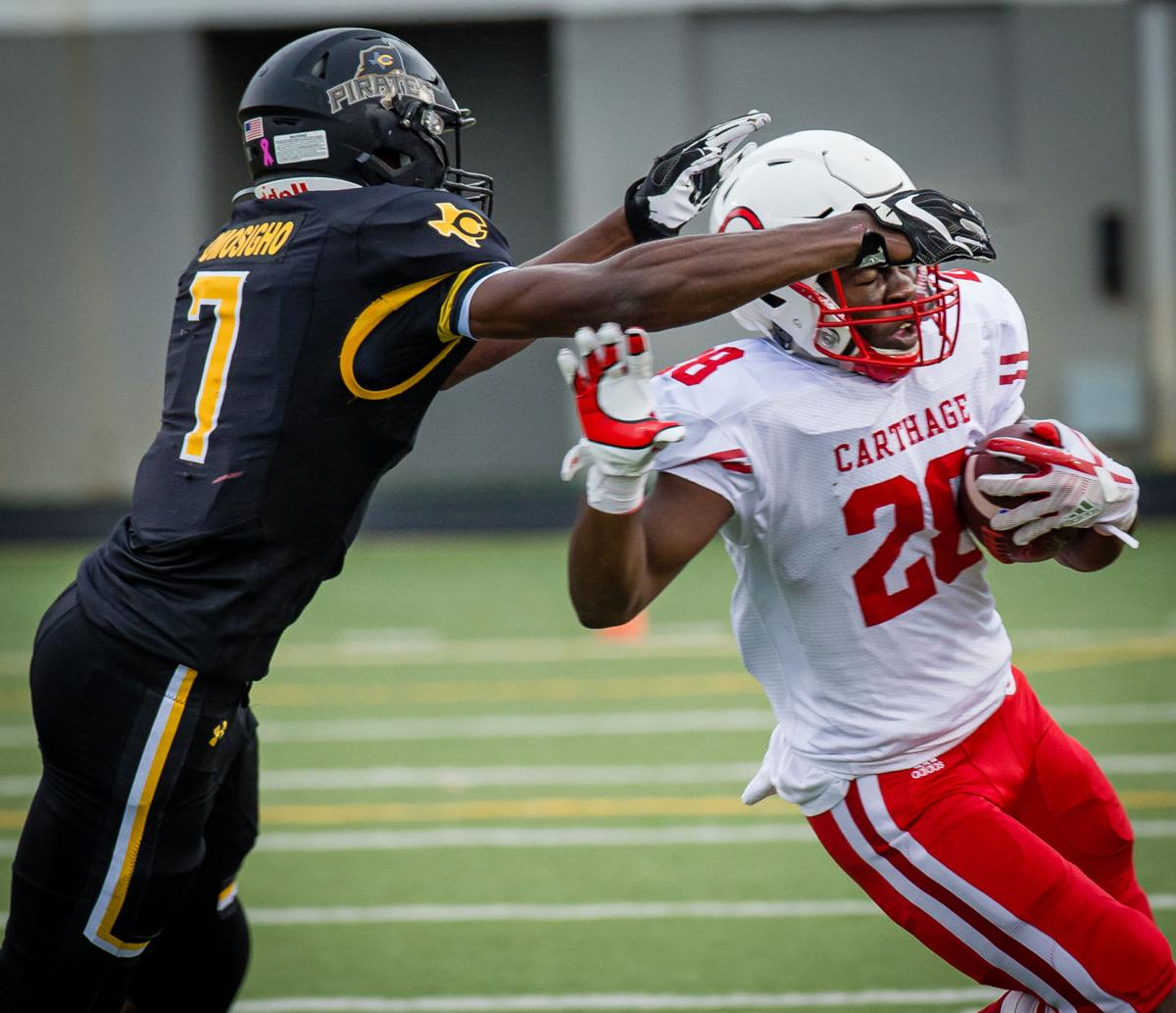 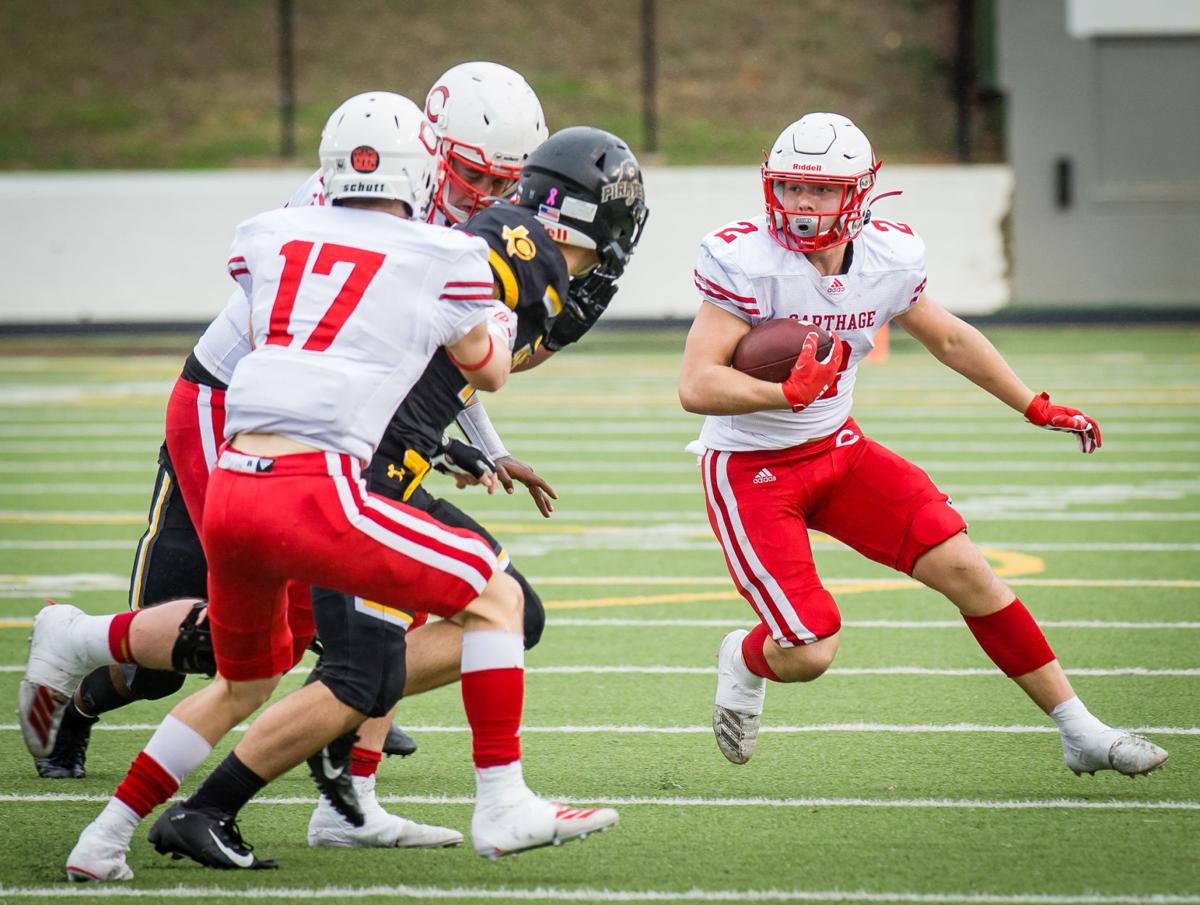 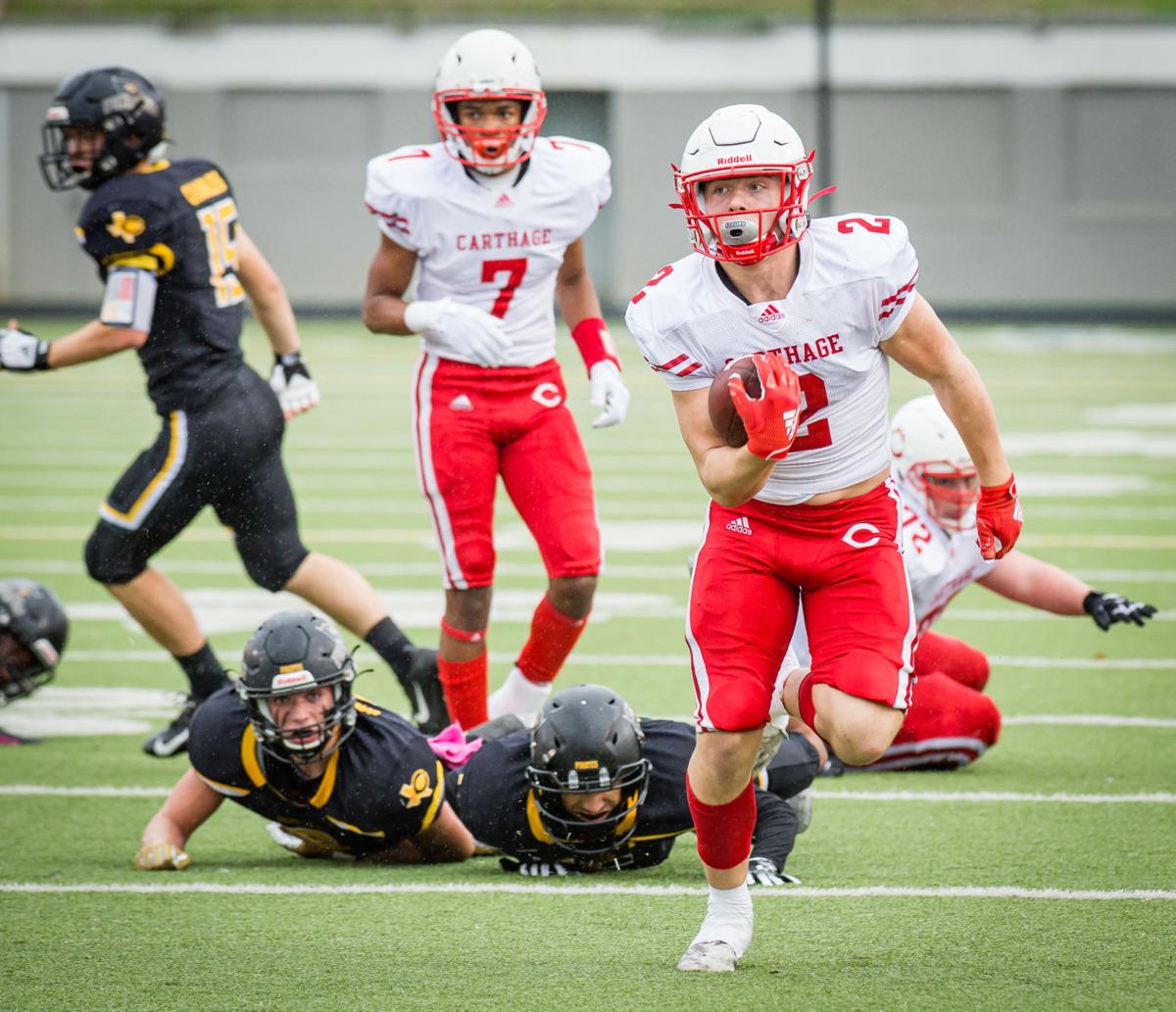 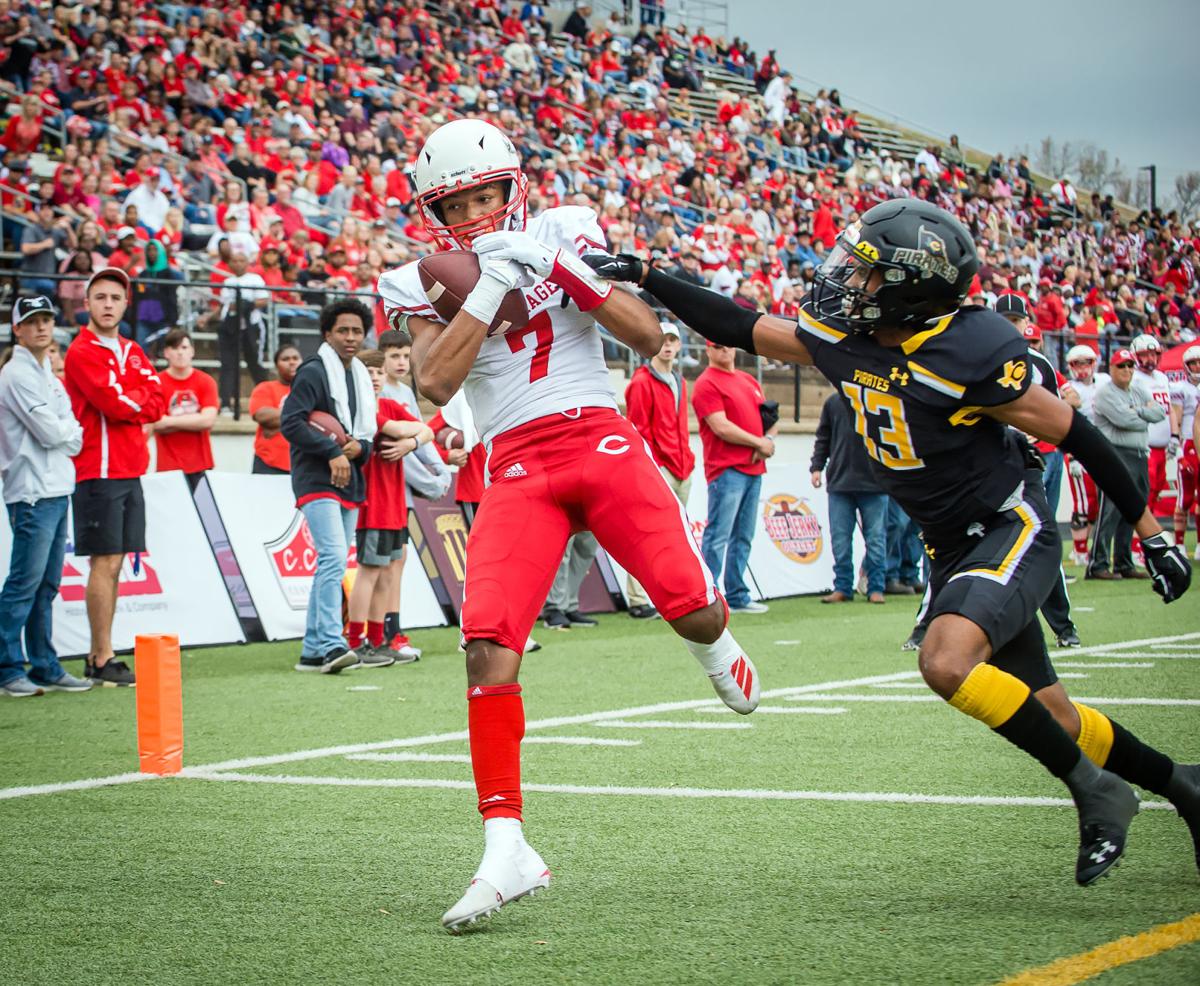 Carthage’s Kel Williams pulls down a pass reception for a touchdown during Friday’s game against Crandall in Tyler. 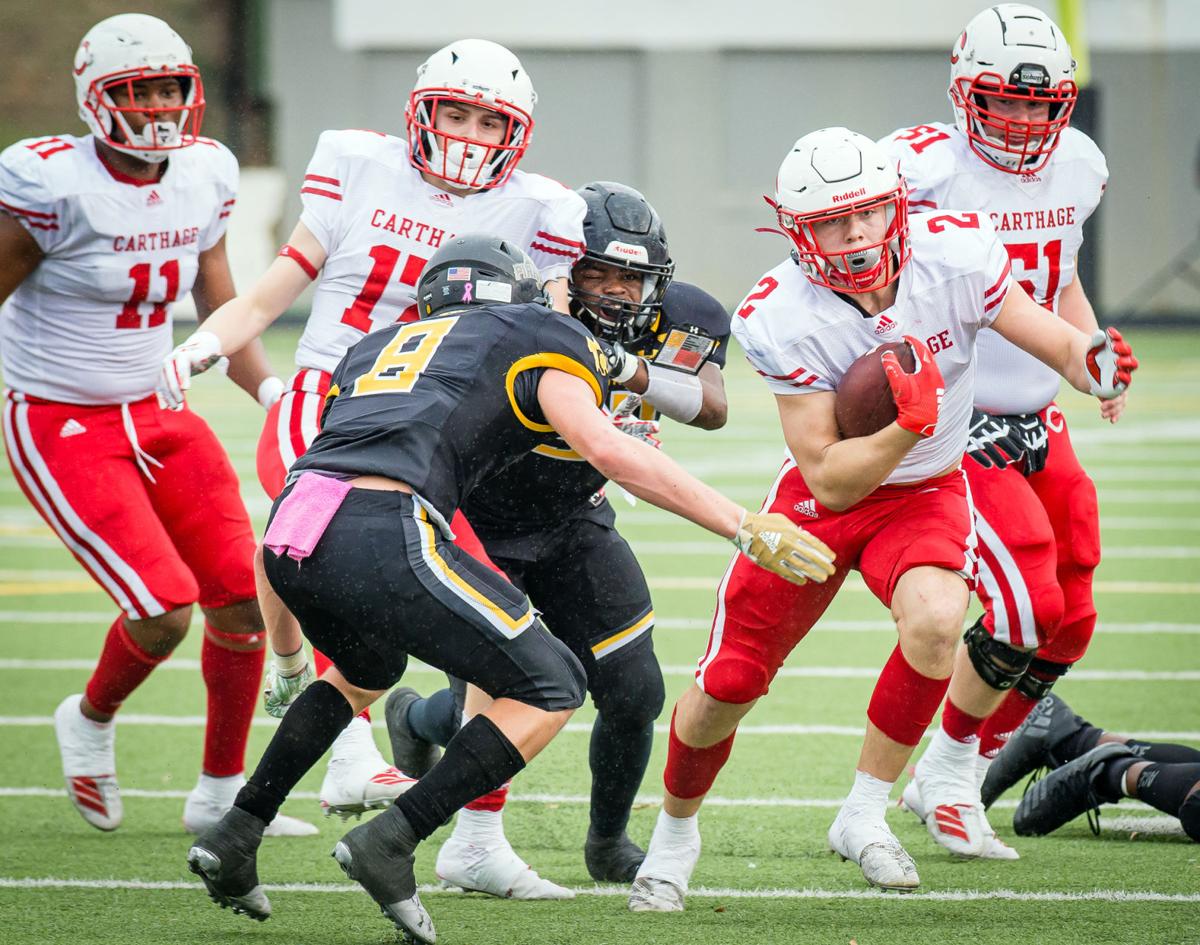 Carthage’s Mason Courtney breaks through the line of scrimmage for a big gain during the game against Crandall in Tyler. 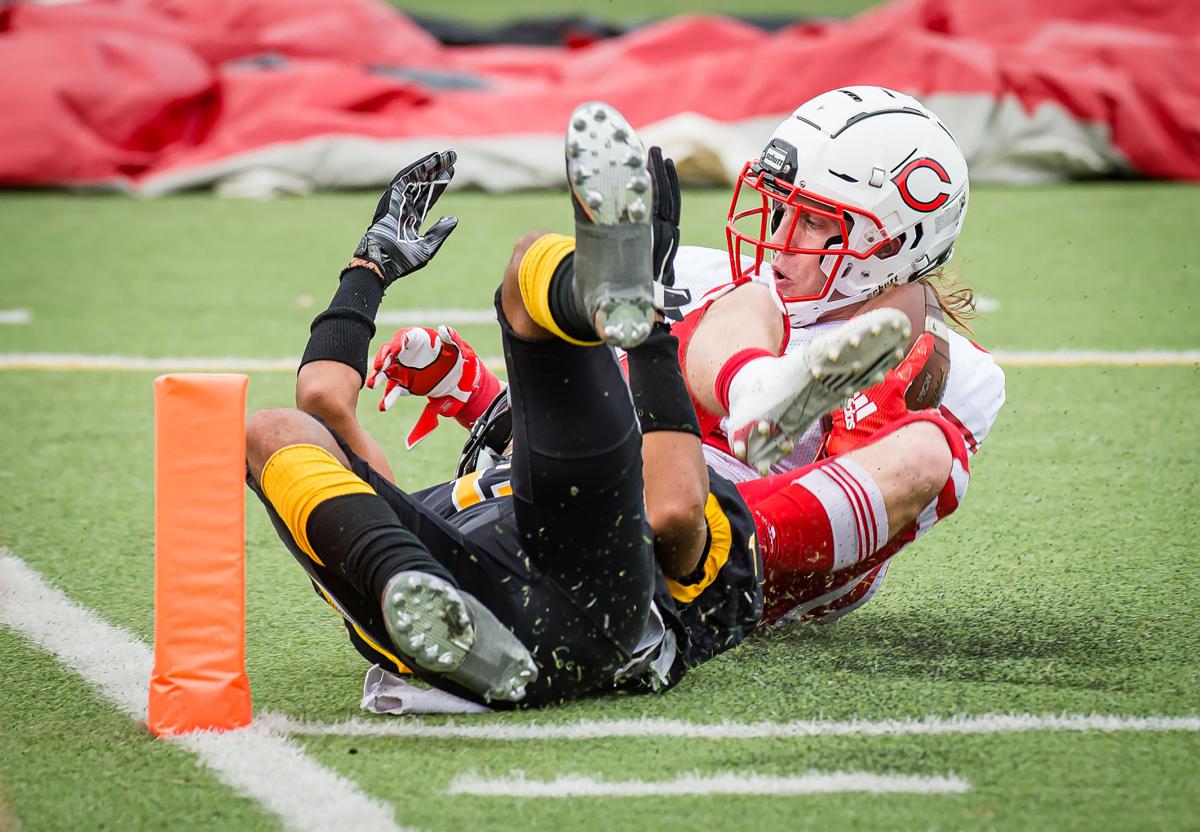 Carthage’s Cole Whitlock crashes into the end zone for a touchdown after scooping up a blocked punt during Friday’s game against Crandall in Tyler.

Carthage’s Kel Williams pulls down a pass reception for a touchdown during Friday’s game against Crandall in Tyler.

Carthage’s Mason Courtney breaks through the line of scrimmage for a big gain during the game against Crandall in Tyler.

Carthage’s Cole Whitlock crashes into the end zone for a touchdown after scooping up a blocked punt during Friday’s game against Crandall in Tyler.

TYLER — Stopping the No. 2 Carthage Bulldogs isn’t the easiest thing to do and teams have been trying to accomplish that goal for years.

The Crandall Pirates were the latest to try and fail last Friday afternoon at Christus Trinity Mother Frances Rose Bowl.

Junior tailback Mason Courtney was held in check for much of the game, but his consistent pounding early helped open things up and the success of the Bulldogs’ passing game made the outcome evident for most of the contest as they left the stadium with a comfortable 52-21 win over the Pirates.

The win was the 13th straight for the Bulldogs as they stay perfect in 2019 and advance to the Region III-4A Division I Finals on Friday night in Jacksonville’s Tomato Bowl against the Midlothian Heritage Jaguars (9-4) in a replay of last year’s regional semifinal at the Star.

That was won 50-49 by the Bulldogs, who never led in the overtime game until it was over.

“We were very, very aggressive and we played the way we needed to,” said Carthage head coach Scott Surratt. “I thought our production was pretty good. For the most part we executed well. We still weren’t as sharp as we needed to be, but that gives us something to work on to get better.”

Shutting down the Bulldogs means shutting down the ground game of junior Mason Courtney and the Pirates were fairly successful at doing that early in the game, as he finished with with just 52 yards on 13 carries on the afternoon.

The Bulldogs also like to mix in something deep, and after a bomb was a little overthrown, they settled for a 10-yard TD pass to Kel Williams from Kai Horton.

But Courtney also caught three passes for 48 yards and was on the receiving end of a 17-yard touchdown pass from Horton to close the first half.

He opened the second half with a 4-yard touchdown run — set up by a 44-yard bomb to Kelvontay Dixon — to regain control for the Bulldogs.

“Courtney just gets better as the game goes along,” Surratt said. “He starts wearing down the defense and then he’ll catch a short pass and break one for some big yardage. Next thing you know we’re in the end zone.

“We had a few more drops from our wide receivers — probably some we may never see again. But we’ve got three very good wide receivers and they like to catch the ball.”

The other early scoring for the Bulldogs came through the air as Kel Williams caught a 10-yarder from Horton and Dixon made a one-hand catch for an 8-yard touchdown.

Special teams added to the scoring totals as Quinton Owens blocked a punt and Cole Whitlock picked it up on the 6 and rambled in for the score.

That was probably only fair, since the Pirates took advantage of the Bulldogs’ no-punting strategy, using a short field to go 38 yards for the tying score late in the first quarter.

Crandall picked up a key first down when QB Holt Reese hit Billy Myers for 15 yards on a fourth-and-four play.

Sammy Omasigho, Crandall’s Wildcat back, did the damage the rest of the way, picking up a key third down and then scoring from the 7 to tie the game at 7-7.

The Bulldogs had to convert two fourth-down plays as they regained the lead on Dixon’s 8-yard score.

After a four-and-out, the Dawgs got the blocked punt and Whitlock got the points as they made it a 21-7.

“Right now it’s hard to see those drops and you start worrying a little bit I have full confidence in our guys,” Surratt said. “We’d like to be sharper and we’d like be a little more in control. Our 1’s gave up 14 points and just played great. We’ll take that any day.

“We know we have to tackle better, but I think we can do that as well.”

Another bomb to Myers behind the secondary accounted for 41 more yards and let Crandall close the gap to 21-14 on a 1-yard run by Omasigho.

Carthage got a 40-yard field goal from Brennan Phillips and Courtney’s catch-and-run for 17 to make it 31-14 at the half.

The second half saw Courtney’s running touchdown from the 4 after the Bulldogs recovered the second half kickoff. A Jai Brazier sack set up a 14-yard TD pass to Montrell Smith, Horton’s final TD of the night.

Miles Halton picked off a pair of passes in the second half for the Bulldogs, one of which set up an 8-yard Anthony Wilson keeper for a score.

The Pirates would get one more score as backup Luke Spitzer weaved his way through the Bulldogs’ secondary for a 27-yard touchdown.

Horton ended up 15-30-1 for 204 yards passing for four TDs — his sixth 4-TD game of the season. Courtney ended up with 90 combined yards and two scores, Dixon had six catches for 92 yards and ran twice for 41 more and a receiving TD, Kavonte Brown-Hoskins rushed for 52 late in the game, Williams caught four for 29 and McNew caught two for 21.