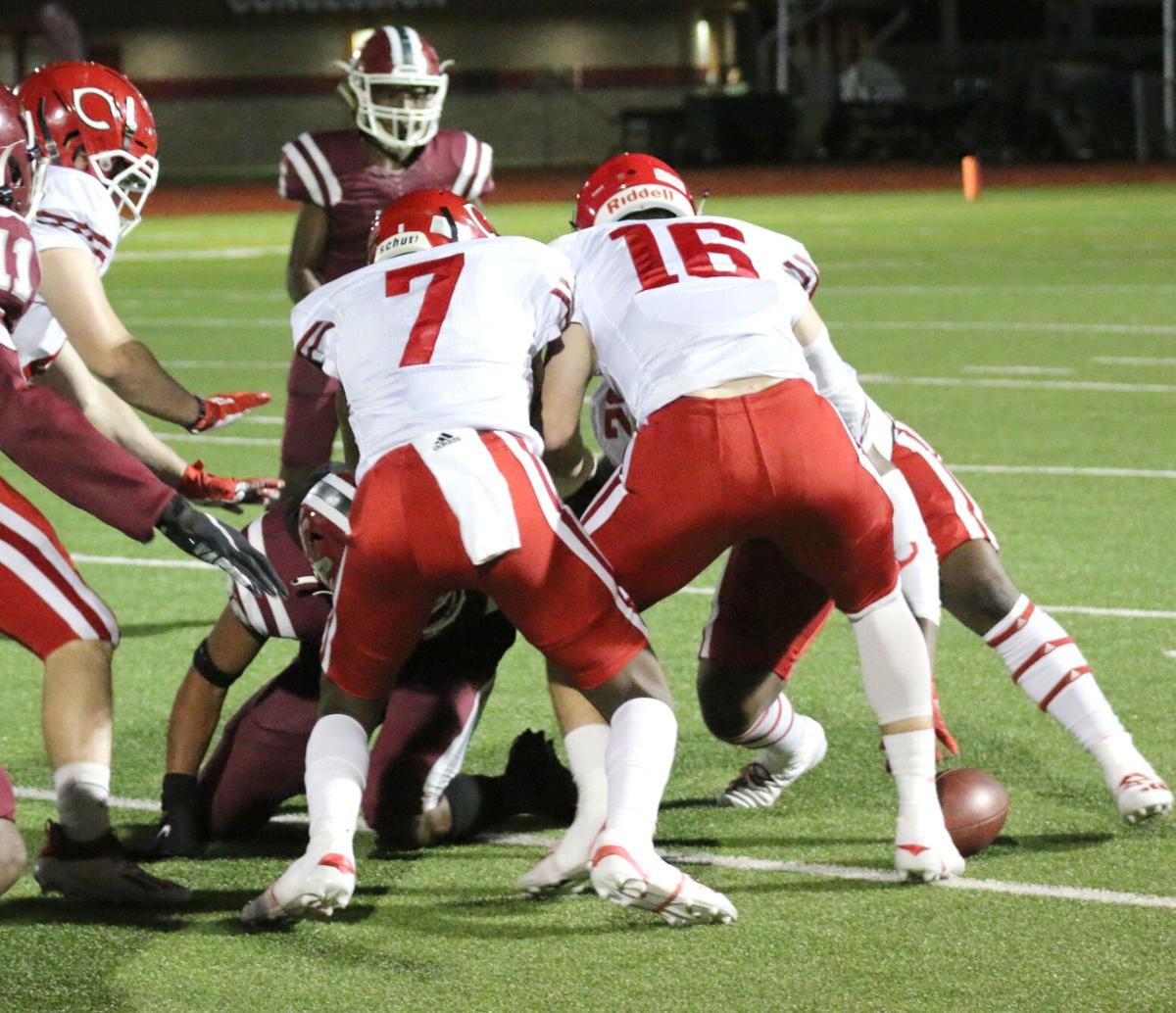 Carthage’s Zay Woods (7) and Austin Morgan (16) help separate a Jasper runner from the ball on a kickoff as teammate Tavarius Johnson recovered the loose ball. 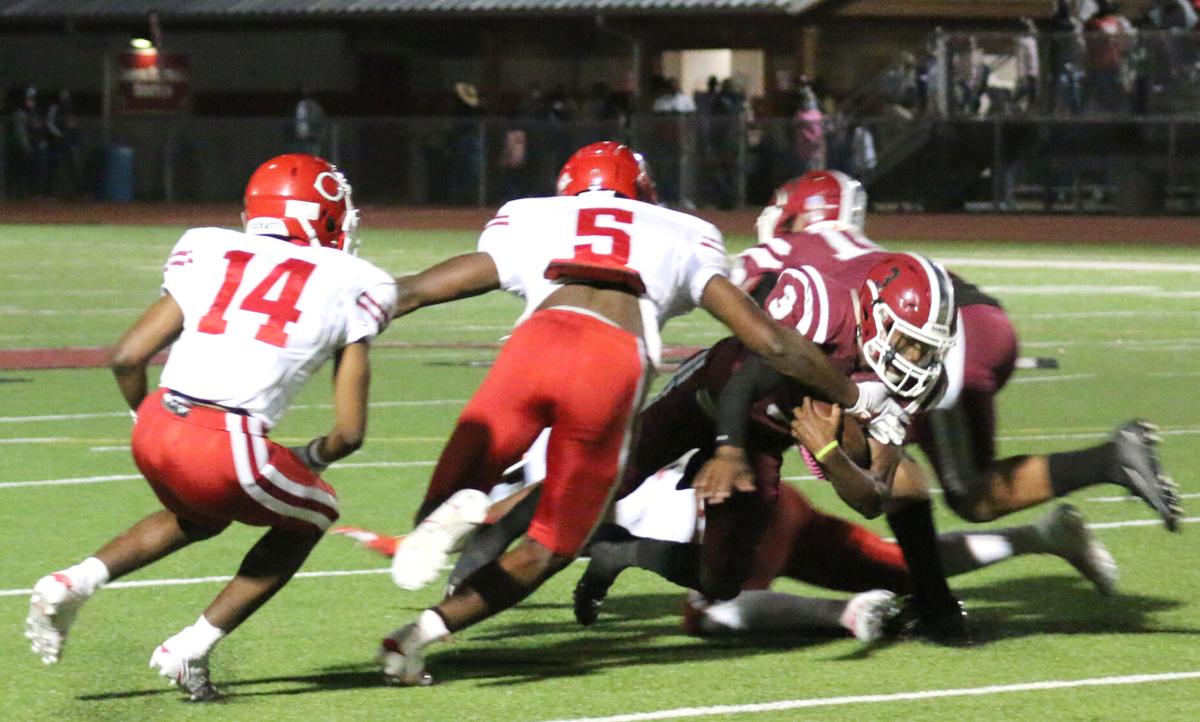 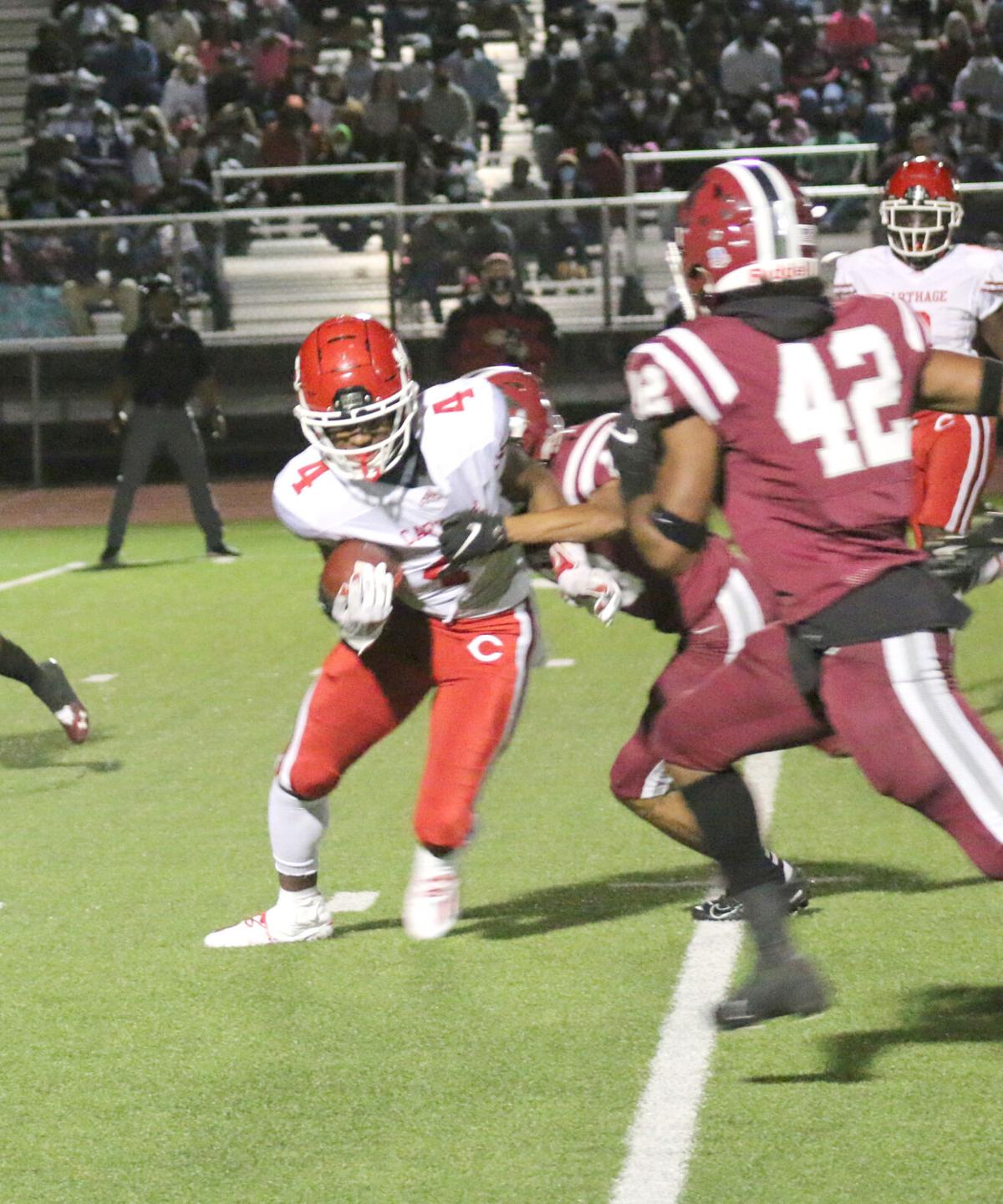 Carthage wideout Montrel Hatten (4) tries to get away from a Jasper defender in last Friday night’s game. Hatten caught four passes on the night as the Dawgs won 35-18.

Carthage’s Zay Woods (7) and Austin Morgan (16) help separate a Jasper runner from the ball on a kickoff as teammate Tavarius Johnson recovered the loose ball.

Carthage wideout Montrel Hatten (4) tries to get away from a Jasper defender in last Friday night’s game. Hatten caught four passes on the night as the Dawgs won 35-18.

JASPER — With four straight games against ranked opponents — three of them on the road — the top-ranked Carthage Bulldogs have had a pretty tough row to hoe.

But they managed to meet every challenge put in front of them.

The Dawgs rode the legs of senior Mason Courtney to the tune of 179 yards and three scores as they knocked No. 4 Jasper from the ranks of the unbeaten with a 35-18 win Friday night.

Courtney definitely made his presence felt in the first half, rushing for 158 yards and three scores.

“I didn’t think we played very good,” Carthage Head Coach Scott Surratt said. “Jasper is always a tough place to play and we did enough to come away with a win. But we have to correct some mistakes.

“We weren’t real happy with the win. We need to do more.”

The Dawgs mixed it up on the first series, throwing to Montrel Hatten and Kavonte Brown. When it was all said and done, however, it was Courtney going over from the 2 to put Carthage up 7-0 with 8:04 left in the first.

A fumbled kickoff gave the ball right back to Carthage. The big play on the drive was a 17-yard run by Nick Stewart that put the ball in the Red Zone and Courtney made it first-and-goal at the 9.

They went to the air, but Kai Horton was picked off for just the second time all season and Jasper’s Andre Thomas brought it out of the end zone and returned it 71 yards before he was tackled. A facemask penalty put the ball at the 16.

Jasper came back with a steady dose of Carl Limbrick and he carried it all four plays, going in from the 3 and the game was tied 7-7.

The home team recovered an onside kick and it appeared Carthage might be trail for the first time all season as Trashawn Adams completed a 31-yard pass to Micah Pickering.

The Dawgs had them stopped facing a third-and-17, but a defensive holding penalty kept Jasper going. The Bulldogs faced a fourth-and-14 from the 30, but Adams’ pass into the end zone was broken up by Brandon King.

It took Carthage just three minutes to regain the lead as Courtney had runs of 11, 27 and 2 before Horton hit Hatten for 14 yards on a third-and-10. Courtney then carried for 11 and scored the TD from the 5 to make it 14-7.

A failed onside kick gave Jasper the ball with great field position. They moved the ball to the 5, where they faced a fourth-and-1. They were going for it, but were flagged for illegal procedure as they tried to get the play off quickly.

They settled for a 27-yard Ayden Garcia field goal to make it 14-10 with a little over three minutes left in the half.

After a 7-yard run by Courtney, Horton and Hatten hooked up on two straight plays for seven and six yards.

A Zay Woods interception and 36-yard return put the ball on the 6. The Jasper defense tightened, but Horton reached up over the pile on fourth-and-1 for the score.

Stewart, who finished with 59 yards, got the final Carthage touchdown on a 19-yard run to make it 35-10.

Jasper took advantage of a short field to score with just 5.7 left as Limbrick went over from the 3 and then carried in the two-point conversion.

“We were able to stay balanced on offense,” Surratt said. “We were just taking what they gave. They were playing their secondary deep, so we ran the ball more. We may be 80 percent running and 20 percent passing, but it’s still balanced to us if we keep moving the ball.

“The offensive line — especially the left side — played very good. Mason ran hard all night. Nick Stewart had a big game and he’s getting better every week. He’s coming on as a versatile player for us.”

Linebacker Kip Lewis was the Defensive Player of the Week for the Dawgs as he had a team-leading 15 tackles and a sack.

Freddy Lynch had 10 tackles, Austin Morgan had nine, Je’Kerrick Johnson and Camden Foster both had seven, Bobby Cooks had six and Kylon Foster had four.

“The defense did a good job,” Surratt said. “They had been averaging 40 points a game and rushing for about 300 yards a game. We put them in some bad situations offensively. But the defense played well, led by Kip Lewis.”