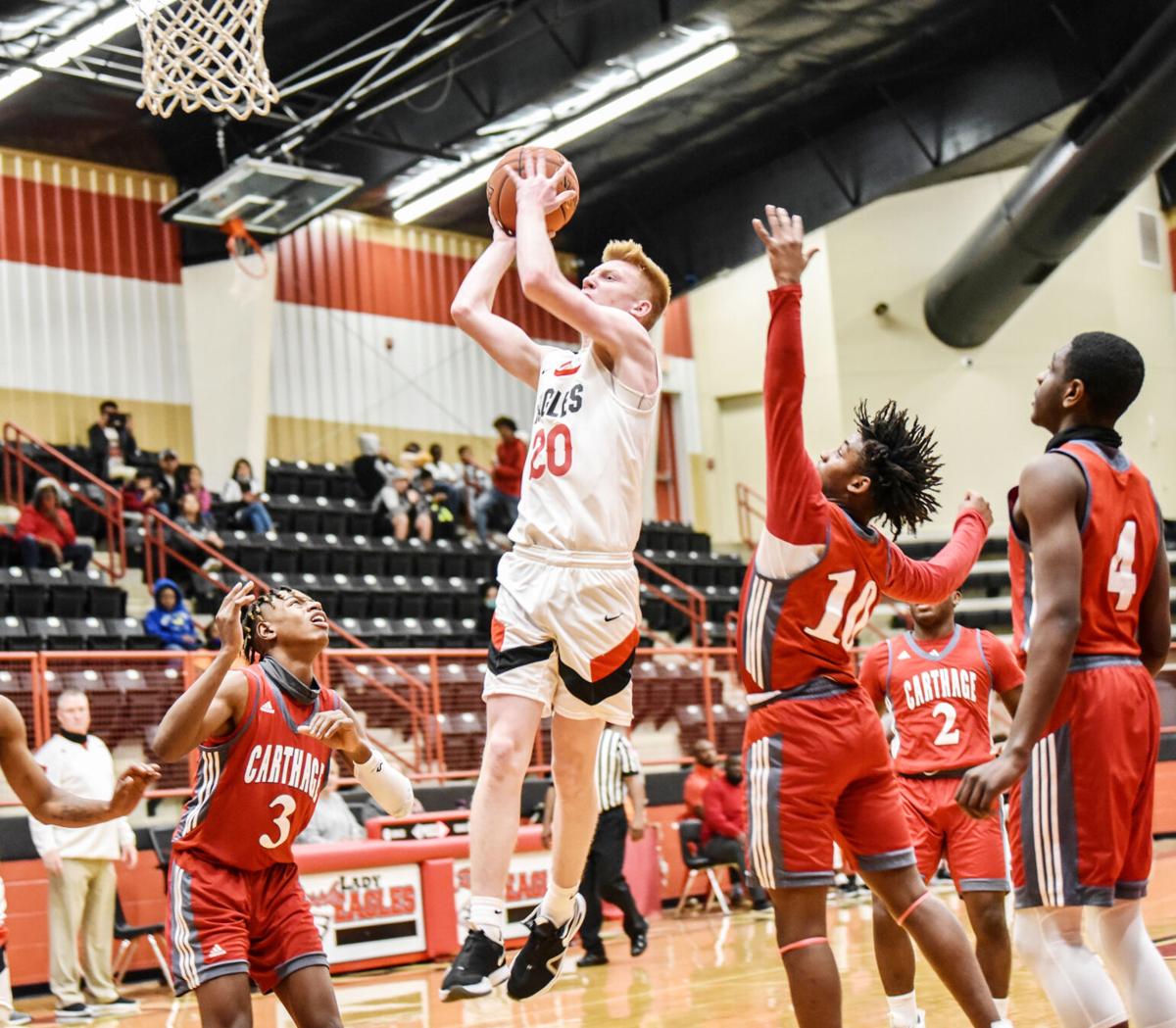 Rusk sophomore Aiden McCown (20) goes up for a basket in between Carthage’s Zay Woods (3) and Montrel Hatten (10) in Tuesday night’s game in Rusk. 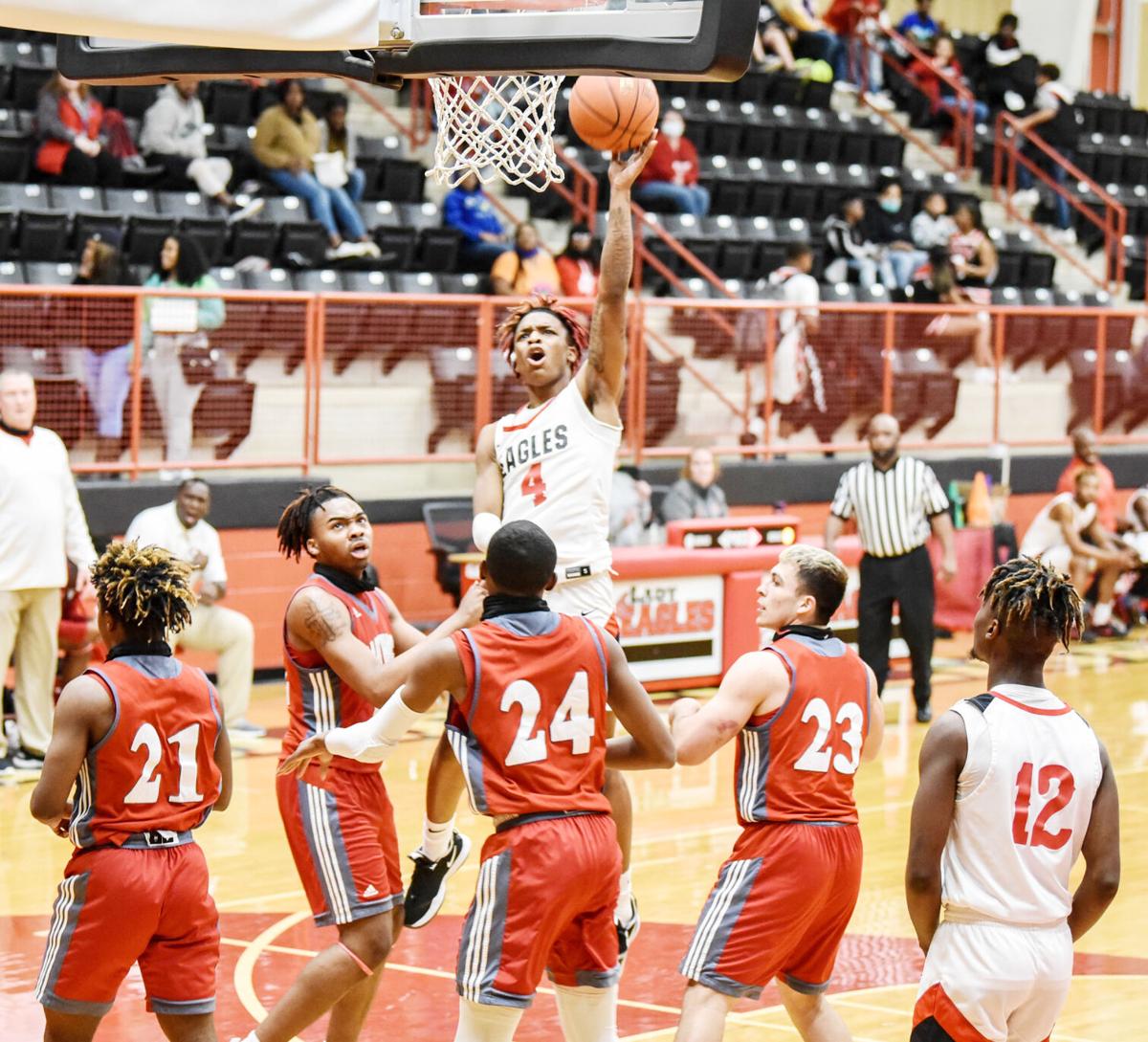 Rusk’s K.T. Tilley (4) gets a jump on the Carthage defense to get off his shot in Tuesday night’s game in Rusk. The Bulldogs won 73-38 for their fourth straight win.

Rusk sophomore Aiden McCown (20) goes up for a basket in between Carthage’s Zay Woods (3) and Montrel Hatten (10) in Tuesday night’s game in Rusk.

Rusk’s K.T. Tilley (4) gets a jump on the Carthage defense to get off his shot in Tuesday night’s game in Rusk. The Bulldogs won 73-38 for their fourth straight win.

RUSK — The Carthage Bulldogs got off to another fast start shooting the ball and managed to share the wealth in their 73-36 win over Rusk Tuesday night.

The Dawgs had four in double figures and got scoring from 10 players as they improved to 6-1 for the season and 3-0 in district play. They were scheduled to be at Palestine on Friday night.

An 18-7 first quarter lead turned into a 43-15 halftime advantage. The Bulldogs went up 65-32 heading into the final period.

Montrel Hatten and Anthony Riggans both had 16 points to lead the Bulldogs, followed by Nick Stewart with 12, Nate Marry with 11, Zay Woods and Freddy Lynch with five each and Camden Foster and Kam McCullough with three each.

“I felt like we shot the ball early and it was not just by one guy,” Carthage Head Coach Charlie Tucker said. “I also felt we did a good

job with our press — which helped us get better shots — and we did a good job on the boards, which was also a key. We had pretty balanced scoring — which is what we want.

“That’s always a tough place to play. I’m proud of the kids. We’re always going to get the other team’s best game. So we have to show up ready to play.”

BECKVILLE — The Hawkins Hawks outscored Beckville 6-2 in overtime to earn a 74-70 win on Tuesday and end a four-game Beckville win streak.

GARY — The ninth-ranked Gary Bobcat were way too much for San Augustine Tuesday night, holding the visitors down for the first three periods and then shutting them out in the fourth.

Gary is now 19-1 on the season and 6-0 in district play. The Bobcats were scheduled for a showdown with No. 11 Tenaha on Friday night.

RUSK — The Carthage Lady Bulldogs welcomed back the inside presence of Ja’Kyra Roberts Tuesday night, taking advantage of her double-double to beat Rusk 56-33.

The win ended a two-game skid for Carthage as they improve to 9-8 overall and 3-2 in District 17-4A. They were at Palestine on Friday for another showdown with the first-place Lady Bulldogs.

After the first round of District 17-4A play, Palestine and Jasper are tied for first at 4-1, while Center and Carthage are a tied for third and fourth, with Center having the tie-breaker advantage. Hudson is fifth with a 1-4 mark and Rusk is last with an 0-5 record

Ladycats fall to third after loss to Hawkins

BECKVILLE — The Hawkins Lady Hawks notched a 51-45 win over the Beckville Ladycats on Tuesday, knocking the Ladycats into a tie for third.