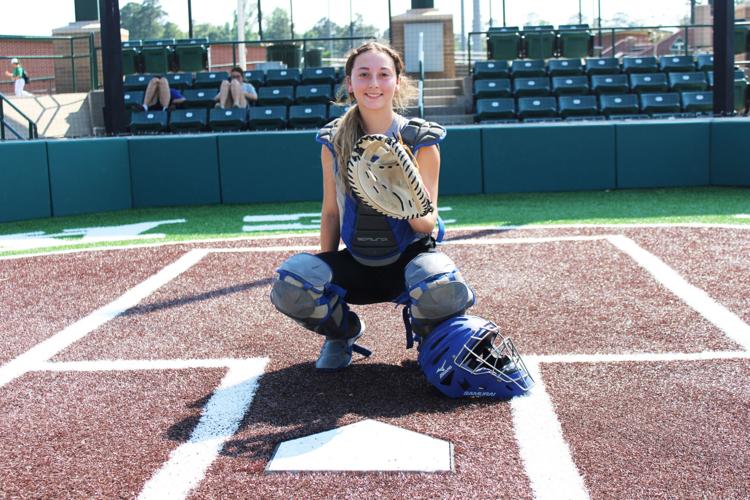 Beckville sophomore Lexi Barr has stepped in playing catcher this postseason for the Ladycats. 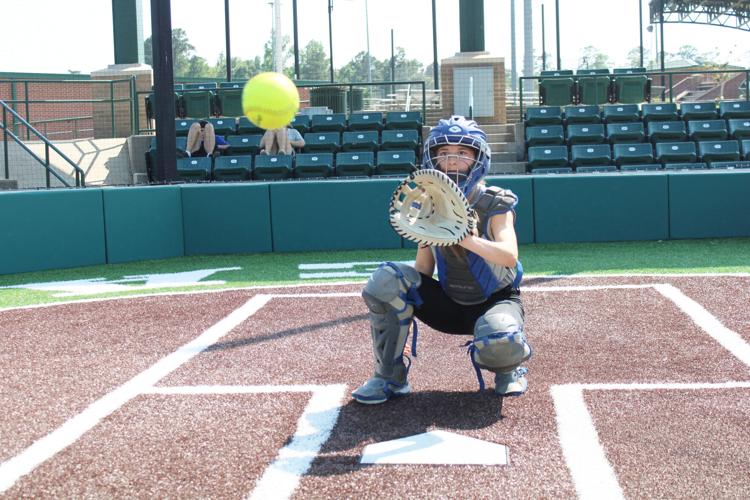 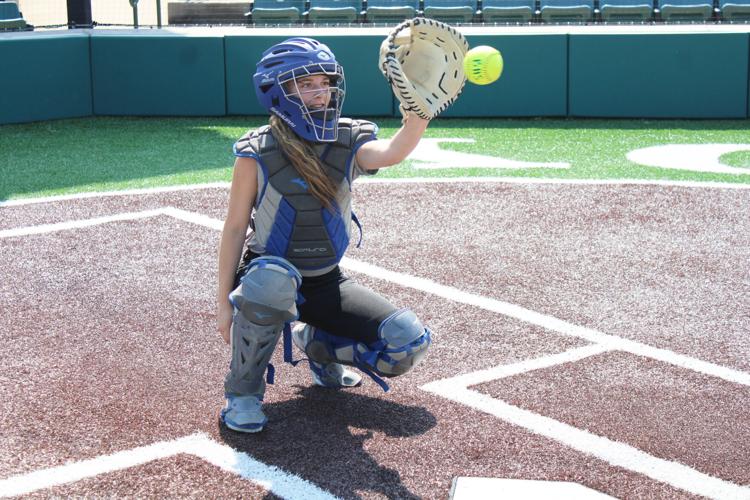 Beckville sophomore Lexi Barr has stepped in playing catcher this postseason for the Ladycats.

Lexi Barr is having more fun now than she’s ever had playing sports.

The Beckville High School sophomore was just getting back in the groove on the softball diamond when the team got word that starting catcher Aubrey Klingler was going to be sidelined indefinitely with a back injury.

Barr, who missed the majority of district play with a broken left middle finger, knew someone would have to step-in and play catcher.

The timing couldn’t have been worse as Klingler, up until the start of the bi-district playoffs, had caught every game up until that point.

When Barr was out nursing her broken finger, the team had developed a solid infield — and after having catching auditions for two days, Beckville Coach Ronny Grandgeorge decided give the job to Barr — someone who had never caught in a game in her life.

“Lexi had never caught in a game before, but she had helped us in a week end, week out basis warming up pitchers,” Grandgeorge said. “She’s not someone that’s never seen the ball break or move. We just felt she gave us the best all-around.”

Barr, who is primarily a middle infielder, didn’t think much of the auditions because she normally helps warm-up pitcher Bethany Grandgeorge in practice and in games.

When Ronny made the call to go to Barr, she was up for the challenge.

“I never really thought he was going to pick me because it’s something I had never done before,” Barr said. “I just had to go up there and do the best that I could and try not to mess up too bad. I was very surprised, but somebody had to do it.”

The sophomore was playing shortstop the final three games of the regular season before Klingler went out.

It was a challenge, especially having her first game behind the dish come in a 2A bi-district playoff series against Douglass.

Beckville, who captured the District 22-2A title in undefeated fashion, were facing a No. 4 seed and were doing so with a brand new catcher.

“I was just getting back in the fold and it was a surprise,” Barr said. “I just had to adapt and overcome.”

Barr was able to ease her own nerves and gain a tremendous amount of confidence after catching Bethany, who struck out the side in the first inning, and then going up to bat second in the bottom half of the inning and hitting a solo home run.

There were talks of putting Bethany behind the dish since she’s had experience catching before, but taking the team’s ace from out of the circle when she’s been in such a groove as of late didn’t make a lot of sense.

If Barr could get comfortable, then Beckville would be able to maintain status quo like they did when she was injured earlier in the season.

“I just think if I pitch the ball where I’m supposed to, she’ll catch it,” Bethany said. “Then we’ll be OK. As long as she catches it, we’ll be good.”

To date Barr has caught all four playoff games for Beckville thus far, and the train has not fallen off the tracks — far from it.

The Ladycats have won all four of their games playoff games, outscoring their opponents by a combined 40-4.

“We’re more in tuned, we haven’t had a case that she’s frazzled or I’m frazzled,” Bethany said. “We’ve been playing with each other for a few years and she’s caught me (in warm-ups) before; you just have to add gear, put a batter up there and catch the ball.”

This year has been a whirlwind year for Barr, who started the school year running cross country and playing junior varsity volleyball before getting called up to varsity in the postseason and being a part of the 2A state championship winning team.

Then just a few days after volleyball season ended, she was the starting point guard on the basketball team. Not to mention Barr was also cheerleading at the same time.

Towards the end of basketball season, the sophomore suffered a badly sprained ankle that hampered her play. She later broke her finger in softball.

“It’s been real crazy,” Barr said. “After I rolled my ankle in basketball and having to comeback from that and gaining most of my strength back, then having to be out another six weeks was challenging. It’s made me more grateful that I get to play because sitting behind the fence is a whole different story then being on the field. I see it from a different perspective, and it makes me happier when I’m playing.”

Barr has been on a tear from the plate since taking over behind the dish, including hitting a walk-off game-winning double against Woden that gave Beckville the 3-2 victory in the first game of their 2A area playoff series. She followed that up by having two more hits, including a home run, three RBIs and scoring twice as Beckville defeated Woden 12-1.

Her acceptance of taking over as catcher has helped her at the plate and gives Beckville quite a weapon as not many catchers have the green light when they get on base like Barr does.

Barr stole three bases in the second game of the doubleheader and is a threat each time she gets on base.

Barr said when Klingler is fully healthy that she intends to go back to the infield. But can see herself relieving Klingler when she needs a rest from behind the dish on occasion.

When asked if she was interested in remaining the starting catcher next season, Barr had a simple answer.

Beckville is lucky to have Barr healthy and having fun because what she has done this postseason has not been easy.

“She’s a one-of-a-kind ballplayer,” Ronny said. “We’re a better team having her out there, she’s the right kind of girl.”