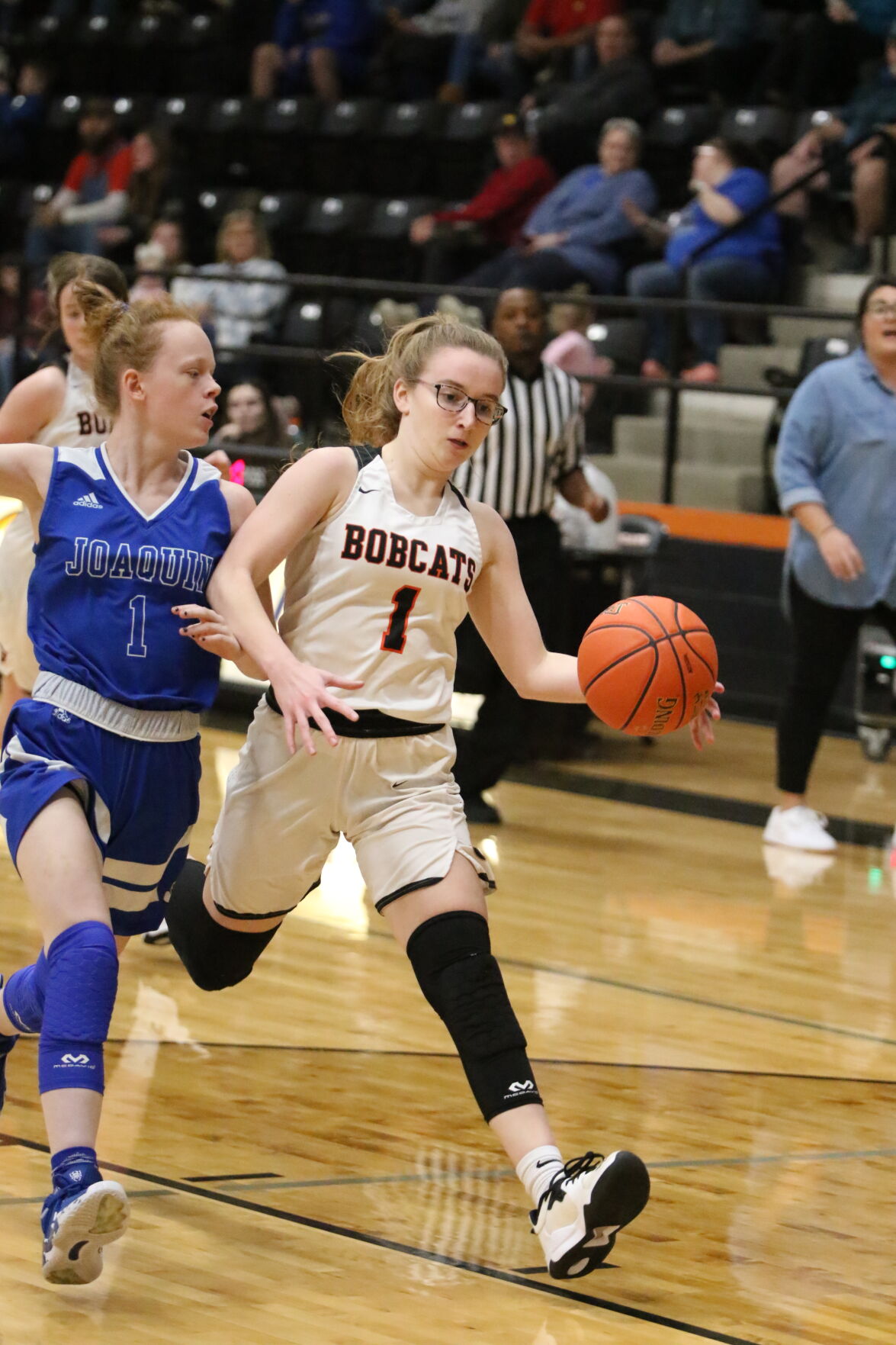 Gary’s Carlee Linebarger drives hard to the basket against Joaquin in a District 23-2A match-up this past Tuesday. 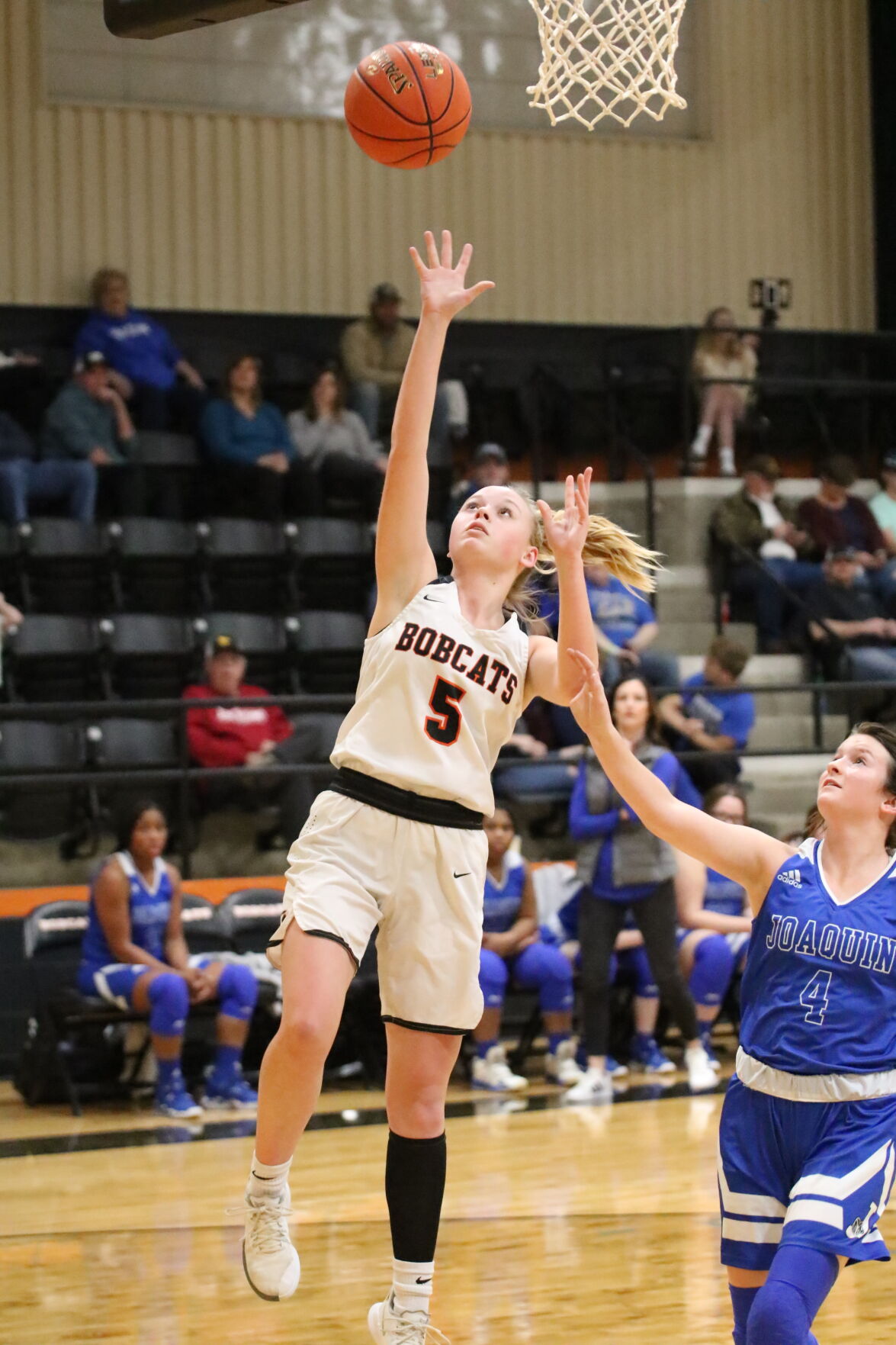 Gary’s Aubrey Kennedy makes a layup against Joaquin in a District 23-2A on Tuesday. 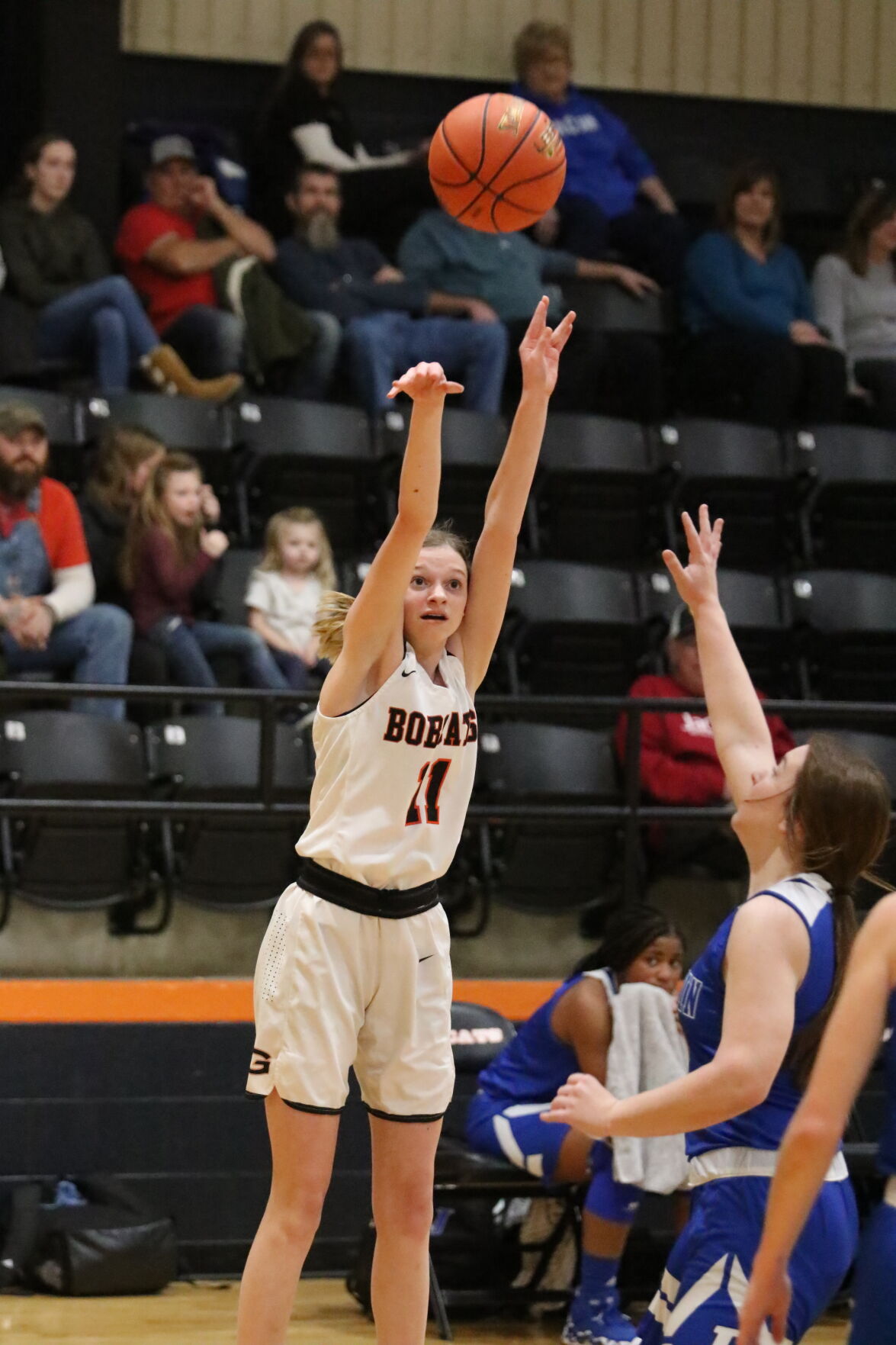 Gary’s Makayla Woodfin knocks down a 3-pointer against Joaquin in a District 23-2A matchup this past Tuesday.

Gary’s Carlee Linebarger drives hard to the basket against Joaquin in a District 23-2A match-up this past Tuesday.

Gary’s Aubrey Kennedy makes a layup against Joaquin in a District 23-2A on Tuesday.

Gary’s Makayla Woodfin knocks down a 3-pointer against Joaquin in a District 23-2A matchup this past Tuesday.

GARY — The Gary Lady Bobcats basketball team sure was glad to have their point guard and team captain Carlee Linebarger back.

Linebarger, who missed the previous two weeks due to lingering leg injuries, returned and helped the Lady Bobcats win their first district game of the season.

Linebarger had 18 points and 12 rebounds — both game highs — along with six steals to lead the way as Gary defeated visiting Joaquin 40-35 in a District 23-2A contest on Tuesday night.

“Carlee has been out for two weeks, so the young ones have had to figure it out together,” Gary Coach Johna Gresham said. “Makayla (Woodfin) was a little shaky in the first half, but after getting her feet underneath her she was ready to go. She’s going to be key for us in the future.”

Woodfin came up big for Gary, including giving the Lady Bobcats their first lead of the game at the 6:50 mark of the fourth when the sophomore hit a 3-pointer that made 28-27.

Woodfin scored 13 points and had a pair of steals, Aubrey Kennedy scored six points with five rebounds and had a game-high four assists, and Halyn Tullos rounded out the scoring for Gary with three points.

Gary started the game slow, falling down 6-0 to start before tying the game 6-6. The Lady Bobcats would tie it all at 10-10 early in the first but were playing catch up until the fourth quarter.

The Lady Bobcats didn’t allow the Lady Rams to build their lead big enough where the game ever felt out of reach.

“I thought that we came out sluggish in the first half,” Gresham said. “I thought we turned the ball over too much and didn’t play very good defense. We’re easily confused by their offense, but in the second half we played aggressive and shot the ball well and more often.

“I was very pleased with how we came out and finished.”

Linebarger changed things by going on a personal 5-0 run over the final 2:12 left to tie the game 25-25 going into the fourth.

“After halftime we did way better,” Linebarger said. “I think it was an adjustment having me back and having to get back to the gist of having everyone back together.”

The Lady Bobcats would get their lead up to 38-30 with 1:49 left in the game but kept on forcing tough passes and pushing the ball when unnecessary.

“We hadn’t been in that situation in a while,” Gresham said of closing the game with a lead. “Even with 10.7 seconds, all we had to do was hold it and we’re trying to force the ball up the floor. We got fouled and made our free throws so it worked out.”

Joaquin cut the deficit to 38-34 with 47.5 left in the game but wouldn’t get within a single field goal the rest of the game.

Having other teammates that are able to handle the ball sure meant a lot to Linebarger in this one.

“Makayla and I are more confident with the ball now,” Kennedy said. “When Carlee gets in a situation, we can step in and help.”

After missing two weeks and seeing her team start 0-2 in district play, Linebarger was welcomed back with a victory and some much needed help.

Against a team that was stronger and longer, Linebarger was thrilled to have her teammates step up and contribute.

“It was good because I needed help,” Linebarger said. “In this one I gave it all I had so it would’ve hurt to lose this one.”