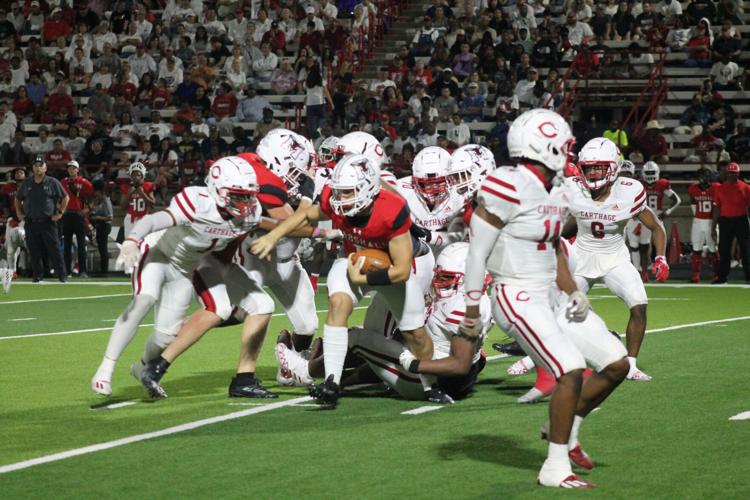 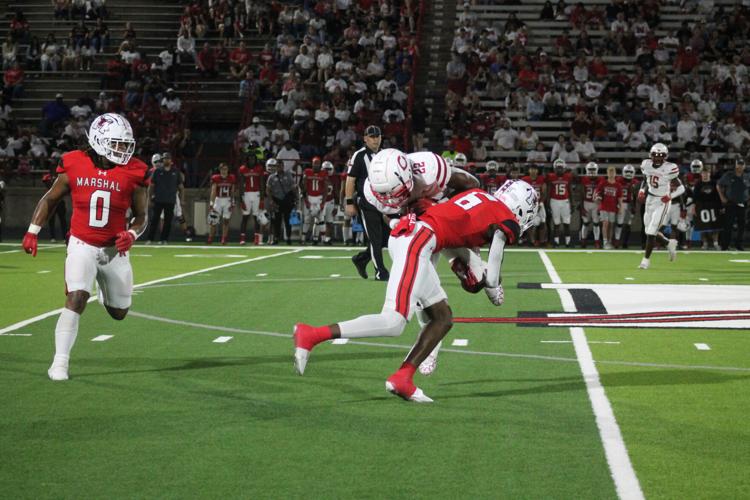 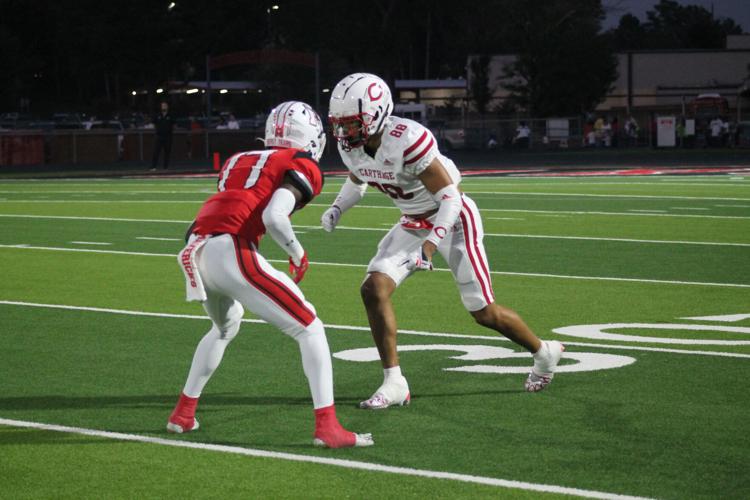 Carthage’s Bradan Manning gets ready to run a route against Marshall on Friday at Maverick Stadium. 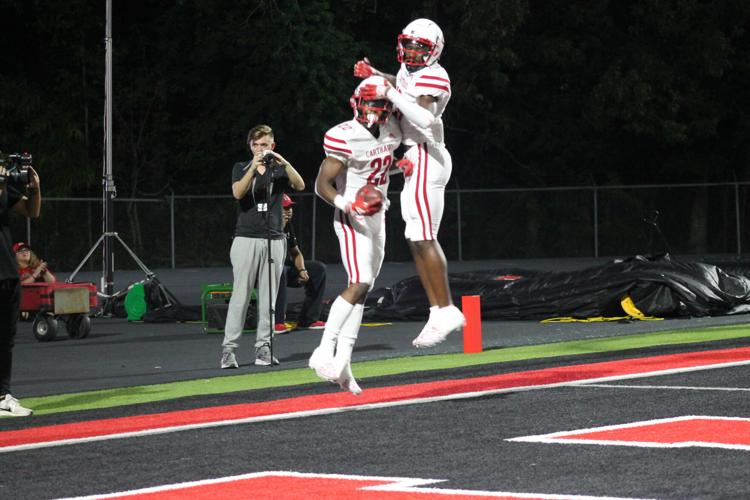 Carthage’s LaRandion Dowden and K.D. Bell celebrate a touchdown in a game earlier this season against Marshall. 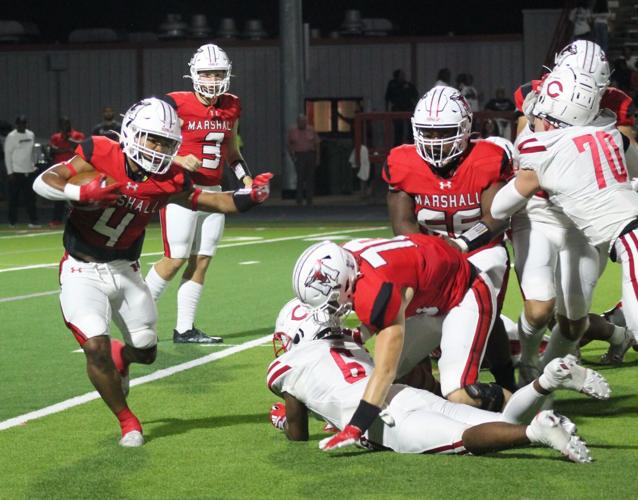 Marshall running back J.Q. Davis looks for running room against Carthage on Friday at Maverick Stadium. 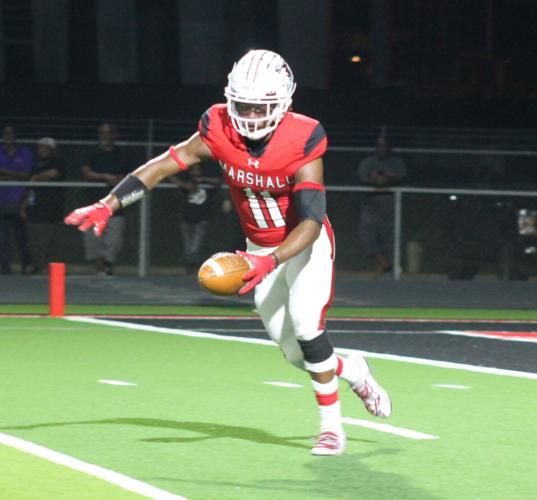 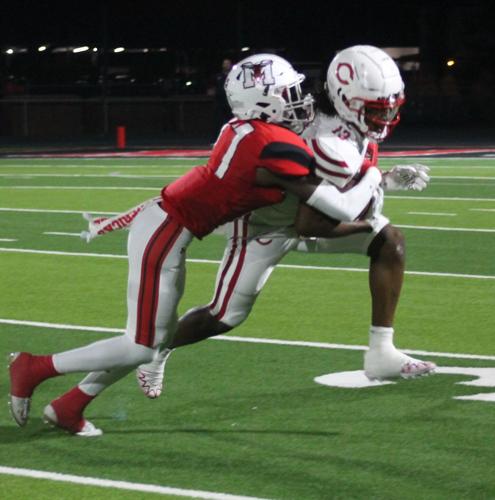 Marshall’s Davernious Robinson drags down a Carthage player on Friday at Maverick Stadium. 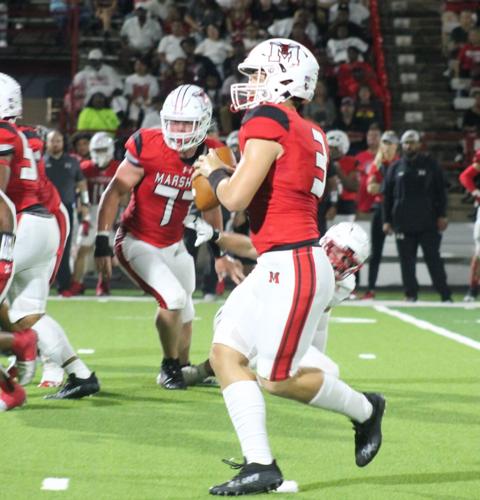 Marshall quarterback Collier Slone gets ready to launch a pass against Carthage on Friday at Maverick Stadium.

Carthage’s Bradan Manning gets ready to run a route against Marshall on Friday at Maverick Stadium.

Carthage’s LaRandion Dowden and K.D. Bell celebrate a touchdown in a game earlier this season against Marshall.

Marshall running back J.Q. Davis looks for running room against Carthage on Friday at Maverick Stadium.

Marshall’s Davernious Robinson drags down a Carthage player on Friday at Maverick Stadium.

Marshall quarterback Collier Slone gets ready to launch a pass against Carthage on Friday at Maverick Stadium.

MARSHALL — Carthage junior running back LaRandion Dowden scored three touchdowns before the Marshall Mavericks football team could even muster a first down.

It was that type of night as the Carthage Bulldogs wrapped up non-district play with an empathic 42-0 shutout victory over Marshall at Maverick Stadium on Friday.

“It was by far our best performance,” Carthage Coach Scott Surratt said. “They are better than the score was, and our kids played well. Our coaches came up with great plans, like always, but the players still have to execute the game plan, and they did a phenomenal job.”

Dowden — who only rushed one time in the second half for eight yards — finished with 89 yards on 14 carries.

Carthage senior quarterback Connor Cuff was his usual stellar self this season, throwing for 186 yards and three touchdowns while completing 18 of his 28 pass attempts in three quarters of work.

Noah Paddie had four catches for 59 yards, including a pair of touchdowns, as the senior has caught at least one touchdown pass in all four games this season.

Paddie had a 36-yard touchdown that started as a 10-yard gain then the senior withered away multiple times like a snake until reaching pay dirt.

“Cuff just threw me a good ball and gave me a chance to make a play and I made the play,” Paddie said of his 36-yard touchdown. “I was excited and ready to celebrate with my team.”

Carthage (4-0), who came into the season with question marks on their defense, held a team scoreless in the first half in all four games this season.

“Great defense, the players executed,” Surratt said. “They could really run the ball coming in, and they ran it against everybody. They struggled a little against Longview, but we did a great job.”

The Bulldogs led the Mavericks 35-0 going into halftime.

Cuff threw for 108 yards and two touchdowns while completing 13 of his 22 pass attempts.

Carthage was extremely meticulous from the get go as the Bulldogs went 70 yards on 11 plays that was capped by a 21-yard touchdown pass from Cuff to K.D Bell. Bell finished with three catches for 38 yards in the game.

Marshall (2-2) did themselves no favors in fumbling the ball on their first offensive snap of the game, as Deiontae Marry was able corral the ball.

Dowden took advantage of the turnover with a six-yard yard touchdown run to make it 14-0 before Marshall even got a single yard on offense.

“When I came out here I just did my assignment and did what I was supposed to do,” Dowden said. “The overall team performance was good but we still have more to improve on and practice on. We can’t let up now, we have to go get it.”

The Mavericks didn’t get their first, first down of the game until the 1:59 mark of the first half when J.Q. Davis rushed for 19 yards.

In total, Carthage held Marshall to just 43 yards of total offense in the first half.

In total, the Mavericks finished with 123 yards of offense in the game.

“I thought this was probably one of the better games we played as a team,” Paddie said. “Defense put up another zero up and we put up 42 points, it doesn’t get much better than that.”

“We executed in all three phases and played very physical,” Surratt said. “Our defense is so well coached, I’m never amazed at what they get done on that side because I see it all the time.

“Our challenge is to get better and worry about us. Don’t look ahead and start getting better next Monday.”

Cuff came into the game throwing 11 touchdowns to no interceptions and wrapped up non-district play with 14 touchdowns passes and not a single interception.

Both teams came into their final non-district game off of blow out victories.

“We’re excited about the win tonight,” Surratt said. “We’re not going to drink much of that Kool-Aid for too long. We’re going to get ready to roll because we know it’s a long season and at this point no matter how many people tell us how good we are, we got to continue to get better.”

Marshall will begin District 8 5A Division II play next Friday when they host Pine Tree.

Carthage — the No. 1 ranked team in 4A Division II — will begin District 8 4A Division-II play next Friday when they host Bullard.

It will also be Homecoming for the Bulldogs.

Kickoff at Bulldog Stadium is scheduled for 7:30 p.m.