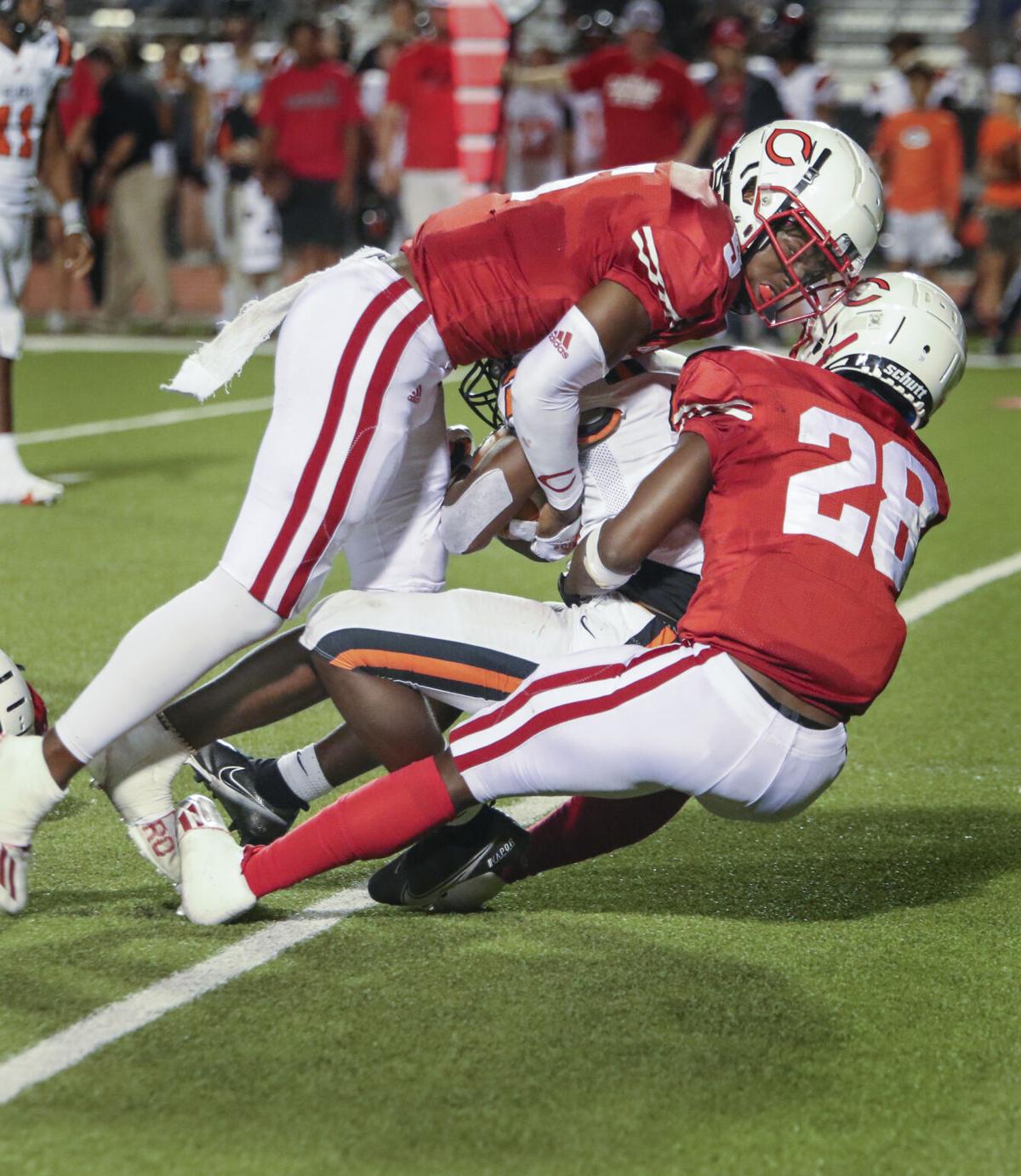 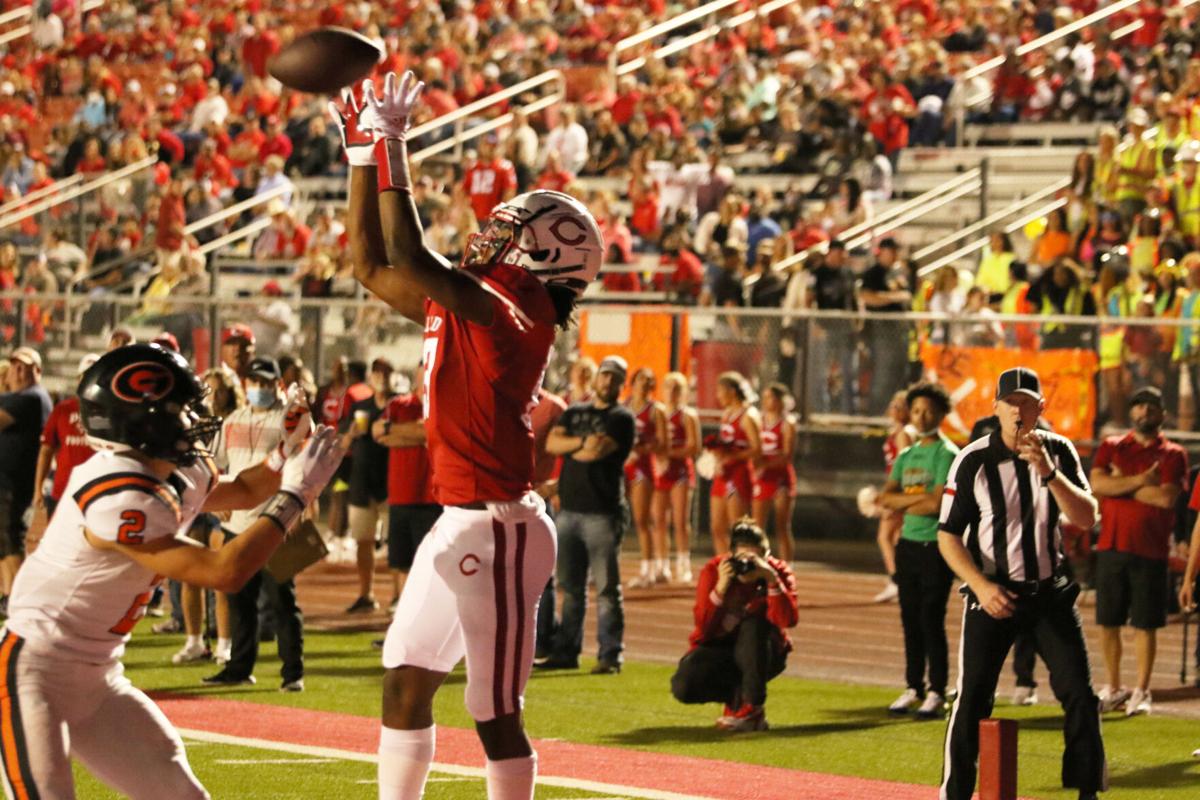 Carthage wide receiver Montrell Hatten goes up for a five-yard touchdown reception in the Bulldogs 28-7 victory over Gilmer on Friday night at Bulldog Stadium. 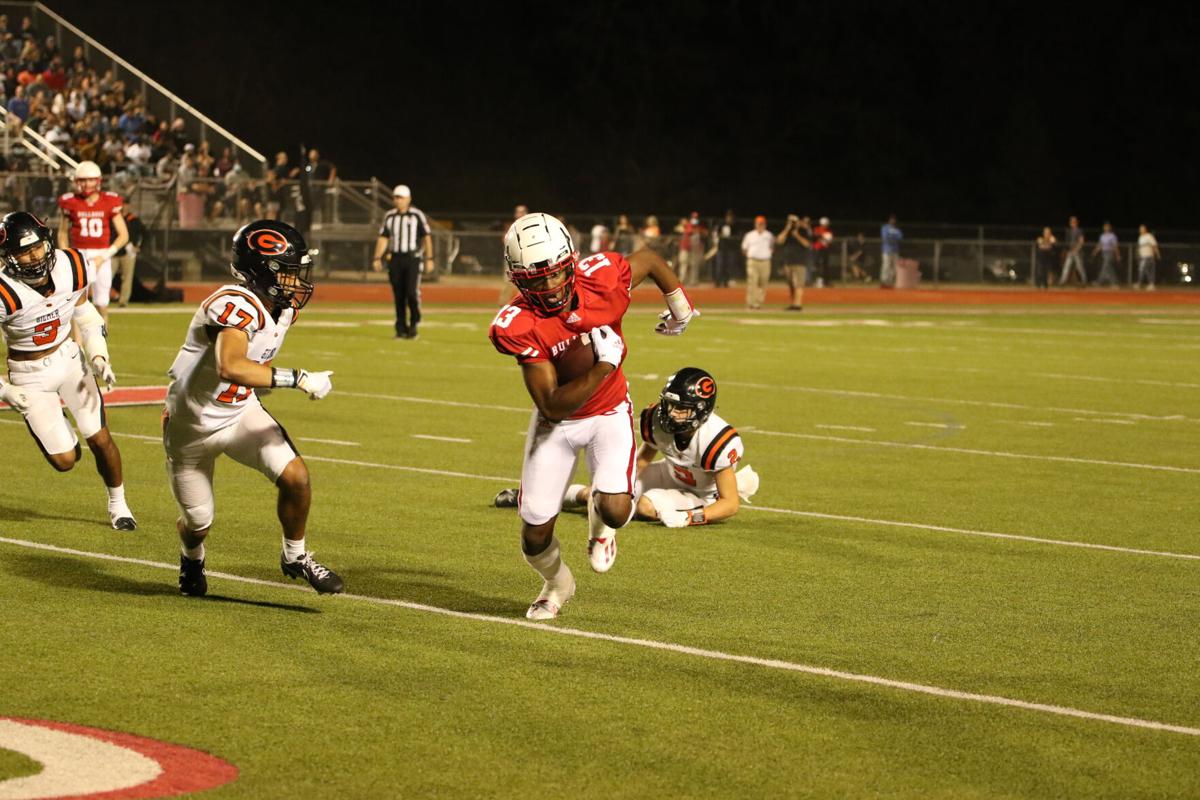 Carthage wide receiver Montrel Hatten races to the end zone for one of his two receiving touchdowns in Friday's 28-7 victory over Gilmer. 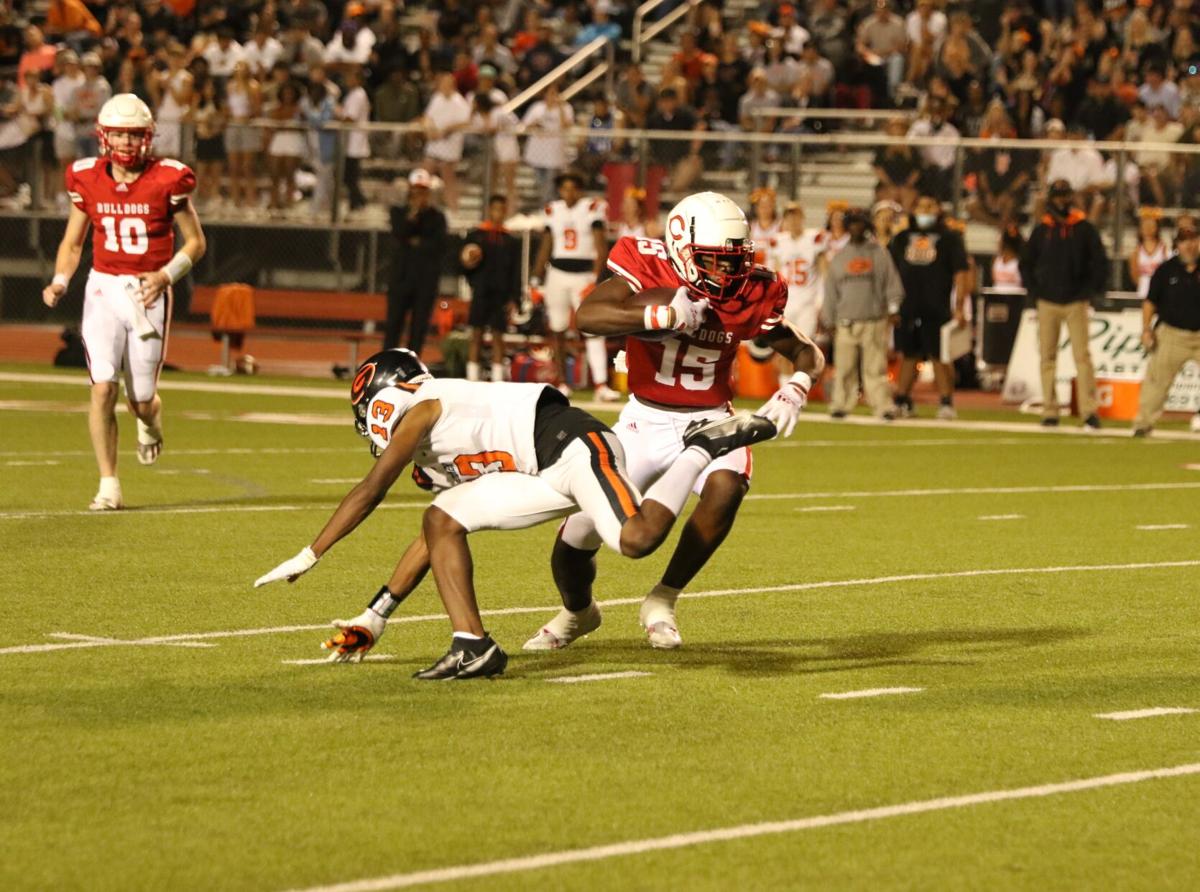 Carthage running back Kadadriane Bell breaks free of tackle for a big gain in Friday night's game against Gilmer. The Bulldogs defeated the Buckeyes 28-7.

Carthage wide receiver Montrell Hatten goes up for a five-yard touchdown reception in the Bulldogs 28-7 victory over Gilmer on Friday night at Bulldog Stadium.

Carthage wide receiver Montrel Hatten races to the end zone for one of his two receiving touchdowns in Friday's 28-7 victory over Gilmer.

Carthage running back Kadadriane Bell breaks free of tackle for a big gain in Friday night's game against Gilmer. The Bulldogs defeated the Buckeyes 28-7.

Dating back to last year’s Class 4A Division II State title game, the Carthage Bulldogs had rattled off 70-straight points against the Gilmer Buckeyes.

Carthage scored the first 21 points of the game and left no shadow of a doubt who the top team in 4A D-II is as the Bulldogs defeated the Buckeyes 28-7 in a matchup featuring the two top-ranked teams in East Texas Friday night in Carthage.

“You have to start with the defense obviously, they played great,” Carthage Coach Scott Surratt said. “They were about in an inch or two from two fourth downs of getting the ball and getting a shutout.”

The Bulldogs (3-0) scored 70 unanswered points in the last year’s state title game and the first 21 points of Friday’s game which took place in front of a sold out standing room only crowd in Bulldog Stadium.

It didn’t take long for Carthage to put points on the board as the Bulldogs went 65 yards on five plays on the drive, capped by a five-yard touchdown pass from Connor Cuff to Montrel Hatten on the game’s opening drive.

Cuff made it a point to find Hatten often as the junior wide receiver finished with a game-high 70 yards receiving on six catches, including a pair of touchdowns.

“Hatten is always reliable,” Cuff said. “All I have to do is throw it to him and make good choices.”

Cuff played the majority of the game behind center for Carthage and threw for 165 yards on 14-of-22 passing, including the two scores.

Once again, the Bulldogs defense led the way as they held Gilmer without a first down until the final minute of the first half.

The Buckeyes (4-1) came into the game averaging 47.25 points per game behind the stellar play of University of San Antonio commit and quarterback Brandon Tennison.

In the first half, Carthage held Tennison to just 16 yards through the air on 3-of-8 passing and just 18 yards rushing on five carries.

“We wanted to continue to fight and blow them out as much as possible,” Carthage senior defensive back Zy’Kerrian Tatum said. “They got their lucky play that they had but through it all we continued to press and keep them off the field.”

It would’ve seemed like Gilmer was turning the ball over or putting themselves in bad positions, but the Buckeyes had four 3-and-out possessions in the first half.

Carthage — who came into the game with a combined 60 yards rushing in their first two games of the season — found some relative success on the ground. Zsema’D Williams finished with a game-high 84 yards rushing on 14 carries while Kedadrian Bell had 12-yard touchdown and 33 yards rushing on five carries for the Bulldogs.

“We had nearly 250 yards in the first half and we should’ve had at least 28 points,” Surratt said. “We can’t leave points off the board but we’re getting better and we know that. We are tons better than we were two weeks ago. We are getting better overall and our defense has some stuff they can improve on — they are really good but they aren’t perfect. That’s why we keep practicing.”

The Buckeyes got on the board when Tennison hit wide receiver Rohan Fluellen for an 11-yard touchdown pass to cut Carthage’s lead to 21-7 with 7:41 left in the game.

Carthage would turn the ball over their next offensive possession, but once again the Bulldogs defense struck again. Tatum intercepted Tennison and raced 66 yards to pay dirt to completely dash whatever slim chances Gilmer had of making a late game comeback.

“I wanted to outrun the offense and get to the end zone as quick as possible,” Tatum said. “It turns out I got there. We’re running full speed and all we could think about is getting to the end zone.”

Tennison finished with 66 yards passing while completing 8 of his 19 attempts to go along with the one touchdown and interception.

The UTSA commit and the Buckeyes defense showed at times flashes of their big play capability but when taking on Carthage you’re facing an entirely different animal.

“We expect our defense not to give up any points, that’s the standard,” Surratt said. “Don’t give up any big plays and (Gilmer) got a little bit tonight but not a lot. We’ll take giving up seven points a night to a really good opponent.”

Camden Foster, Freddy Lynch, Giancarlos Riascos and Bobby Cooks each recorded a sack for the Bulldogs.

Senior and University of Oklahoma commit Kip Lewis had a team high 13 tackles, Riascos had 12, Bobby Cooks 10 and Foster had eight for the Bulldogs

Surratt doesn’t think this will be the last of Gilmer Carthage will see this season. The veteran and eight-time State championship winning coach expects the Buckeyes to be there at the end.

“Hopefully we can get good enough to see those guys again,” Surratt said. “I expect them to be in the State championship.”

Carthage will wrap up non-district play next Friday when they host Pleasant Grove.

Pleasant Grove (1-3) has lost three games in a row and are coming off a bye week.