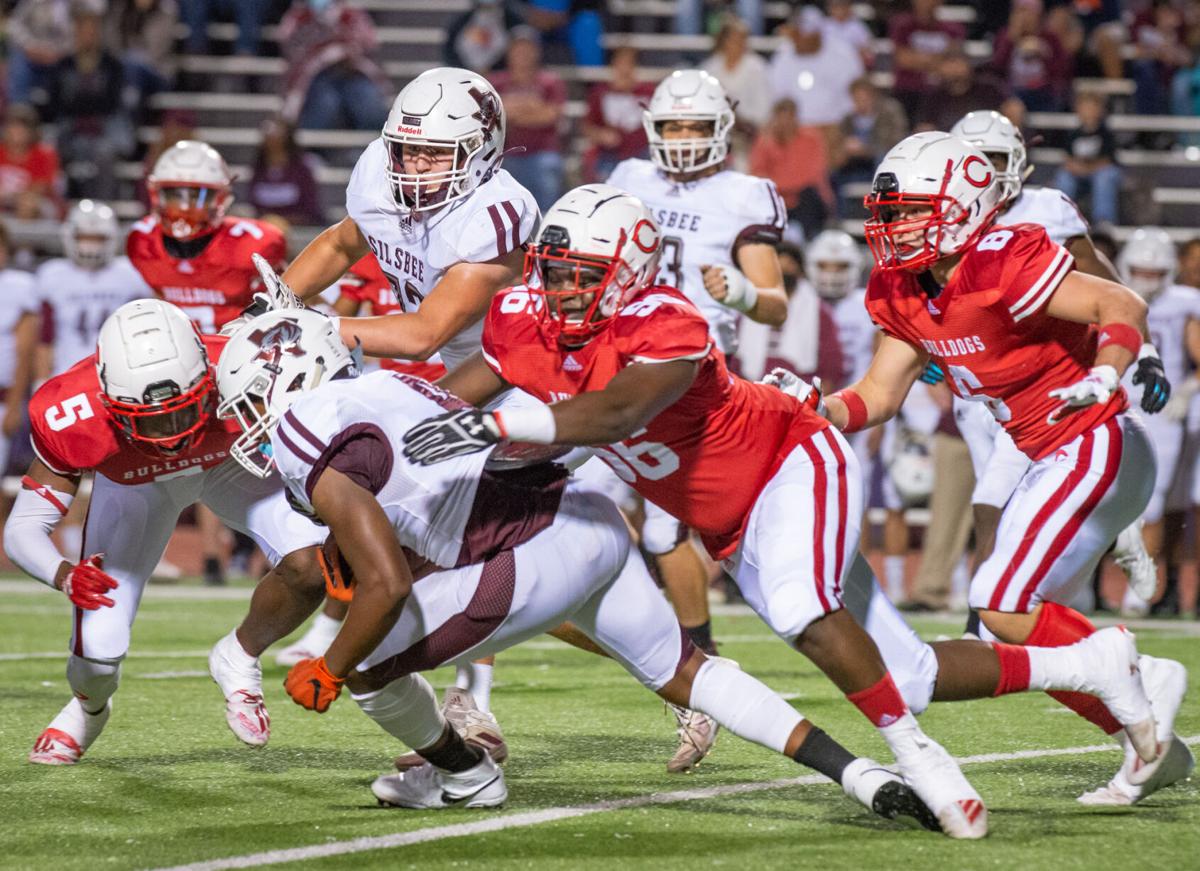 Carthage’s Kip Lewis (5) and Kylon Lister make a tackle during a game last season against Silsbee. 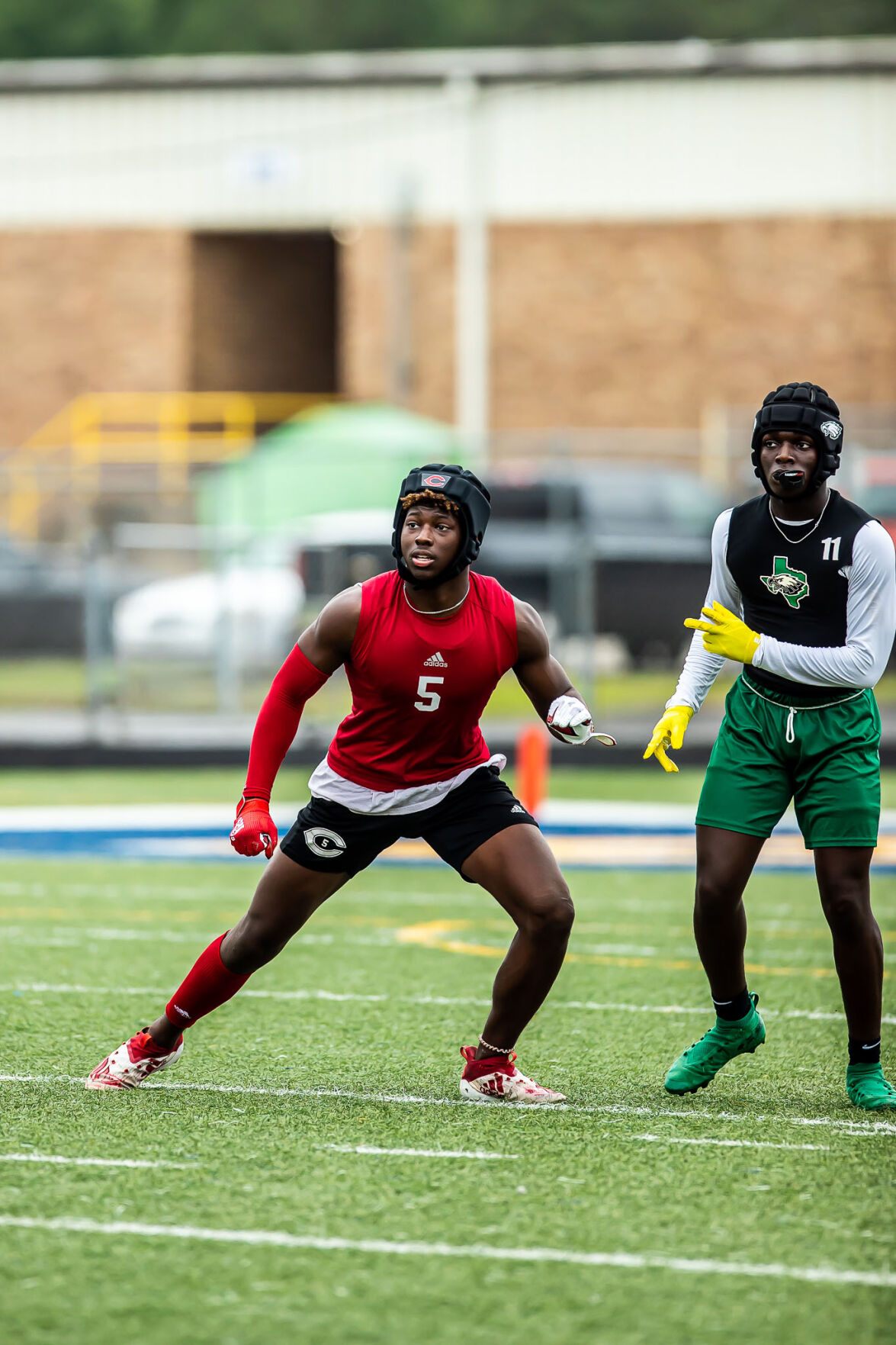 Carthage LB Kip Lewis (5) in defensive coverage against Tatum. The Bulldogs will play at the st ate tournament.

Carthage’s Kip Lewis (5) and Kylon Lister make a tackle during a game last season against Silsbee.

Carthage LB Kip Lewis (5) in defensive coverage against Tatum. The Bulldogs will play at the st ate tournament.

The soon-to-be Carthage High School senior, four-star rated linebacker and University of Oklahoma commit is balancing out life here in Carthage as well as getting himself acclimated to his future life in Norman.

Lewis makes the nearly five and a half hour trek up north pretty regularly because once he’s there full time, he wants to be fully focused on the task at hand.

“I’m just trying to get familiar with over there,” Lewis said. “I’m going to be leaving early, so just getting used to the drive up there. The feeling up there is great. It feels like home and it’s similar to Carthage, and I like that as well.”

Lewis will be leaving Carthage this upcoming January to enroll for the spring semester at OU.

At OU, Lewis will major in business while attending the football powerhouse school.

Carthage Head Football Coach Scott Surratt can’t rave enough about his star linebacker, both as a player and as a person.

“Kip is a great young man whose character is second to none,” Surratt said. “As a player he is our leader and has great talent but doesn’t rely on his talents, he relies on his effort and hard work.”

Lewis isn’t the only superstar athlete in the family as his twin sister Makhai is a stellar and recruited volleyball player. The competitiveness is there amongst the twins.

“She pushes me and I push her,” Lewis said. “We try to push ourselves to the best.”

Kip and Makhai are two of seven kids — and his family was fully supportive of Lewis opting to go to OU as opposed to staying in his native Texas.

Lewis received offers from the University of Texas and Texas A&M — to name a few amongst the many — but it was the bond he made Sooners Head Coach Lincoln Riley and Linebackers Coach Brian Odom that helped him make his decision to attend OU.

“I’ve built a really strong relationship with Coach Odom and Coach Riley,” Lewis said. “I talk to them a lot during the whole recruitment and they feel like people I can respond to.”

It hasn’t been the smoothest time for Lewis after committing to Oklahoma.

Lewis said he got a lot of heat for deciding to go to OU instead of opting for another Power 5 Conference in-state.

“I got a lot of backlash, little like being a traitor for leaving Texas,” Lewis said. “I just felt like Oklahoma was the right fit for me.”

Lewis’ family wasn’t swayed one way or the other. Instead, they were fully supportive of wherever Lewis decided to go to school.

OU presents the total package for Lewis that will help him both athletically and scholastically.

“They have great people and great facilities,” Lewis said of Oklahoma. “I love it up there. I think Coach Odom can help build me to be the linebacker that I want to be.”

That starts next year, as for the remainder of 2021 Lewis is ready to lead Carthage to their third-straight 4A Division 2 State title.

The Bulldogs — the No. 1-ranked team in 4A D-II — will rely on Lewis and the defense at least early on in the season.

Carthage will be breaking in a new stable of playmakers on offense, including a new starting quarterback, running backs and receiving core.

Not to mention that each time Carthage plays, their opponent is extra amped up to be facing the Bulldogs.

“I preach to my guys that there’s always a target on our back,” Lewis said. “We have to strike quick and go at them hard from the first play. Keep on pounding on them and dominating them.”

After not being able to play during the playoffs of his sophomore season, including missing out on playing in the state title game because of injury, Lewis made it a point of emphasis to have a big game at state last season.

Lewis, who was named District 10 4A Defensive Player of the Year last year, said he was nearly in tears his sophomore year at state. While he was happy for his teammates and coaches, it hurt not being able to play.

“My junior year I made it a goal of mine to get back there,” Lewis said. “Make an impact and do it really big.”

Playing at AT&T Stadium, the home of the Dallas Cowboys, was an experience, to say the least for Lewis.

In between having to pause for commercial timeouts, Lewis couldn’t help but take a look at the giant big screen when given a chance.

“It’s unreal,” said Lewis. “The commercial breaks and looking up at the play that you made on the big screen. I think I’m getting used to it now.”

The Bulldogs as a whole are getting used to visiting Jerry World. While AT&T Stadium is the home of the Cowboys, the Bulldogs practically have a residency.

Since the stadium opened up in 2009, Carthage has won seven of their eight state titles in that building.

When asked about the current 30-game win streak the Bulldogs currently have, Lewis didn’t even know how many games Carthage had won in a row.

Surratt has instilled in his program it’s all about the prize and for the Bulldogs that’s a state title, Lewis said.

“Coach Surratt just preached for us to stay focused on the prize,” Lewis said. “Keep our eyes on the prize and don’t forget about what we wanted to accomplish that season.”

With his future set, Surratt is hoping Lewis can end his high school football career on the highest of highs with a third-straight state title.

“We expect Kip to have the best year,” Surratt said. “To lead our team and have another really good year.”

Which would include returning to Jerry World one more time, and if things go according to plan, hoisting up one more state trophy.

“It would be amazing,” Lewis said. “That’s what we’re planning on. Going out there and being ruthless so hopefully we get to get up there again.”