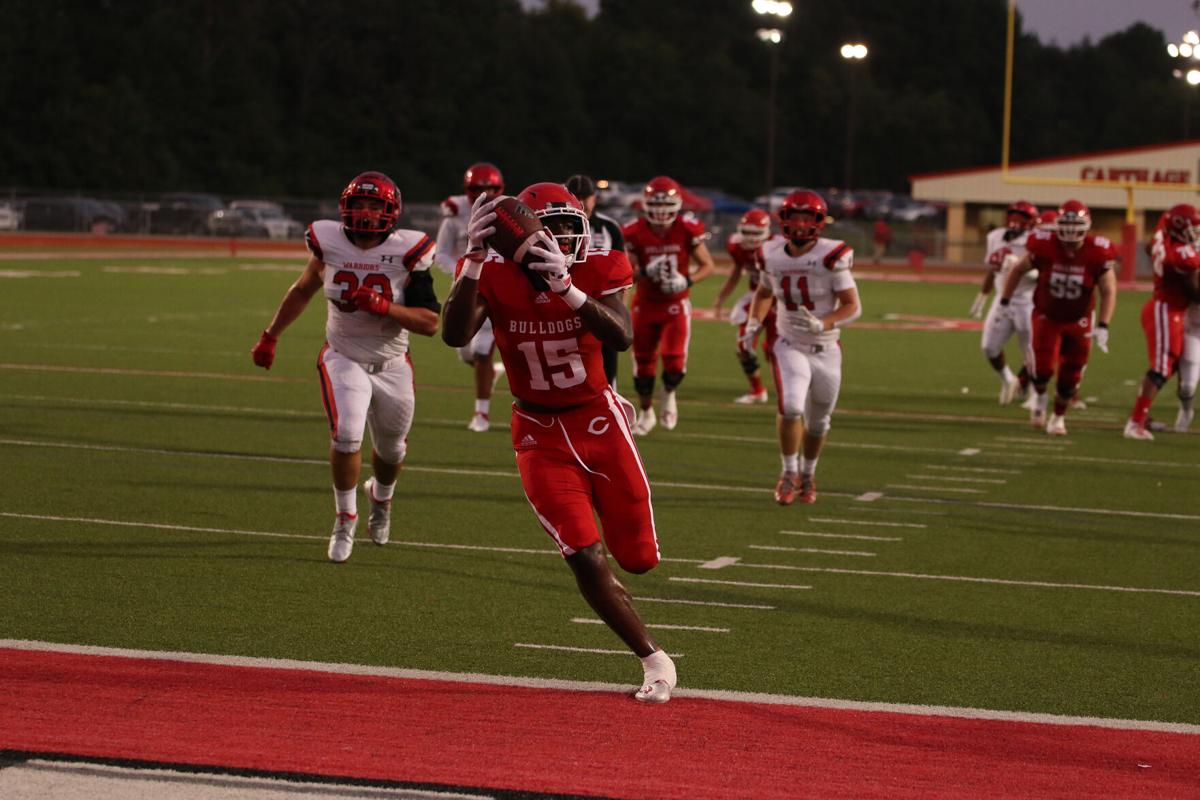 Carthage’s Kadadriane Bell catches a touchdown pass in the first half of Friday’s game against Cornerstone Christian. The Bulldogs defeated the Warriors 42-14. 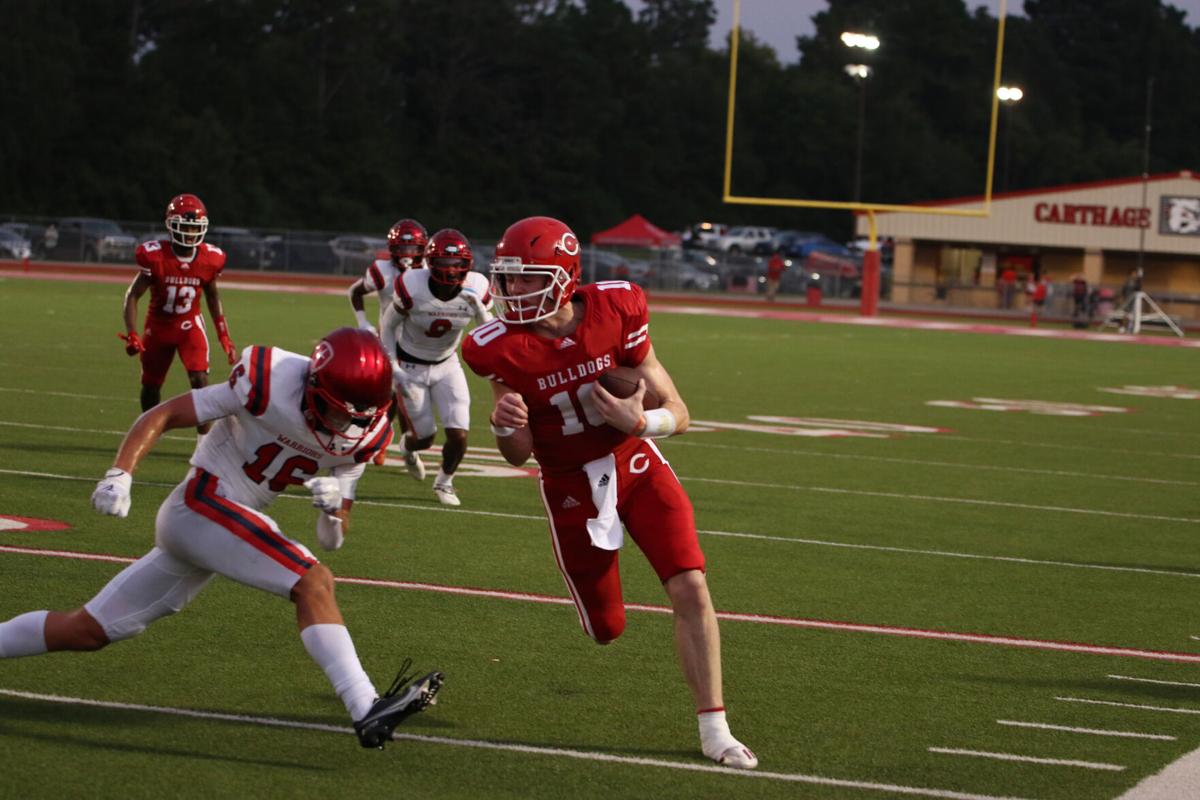 Connor Cuff (10) runs down the field Friday night in the game against Cornerstone Christian. 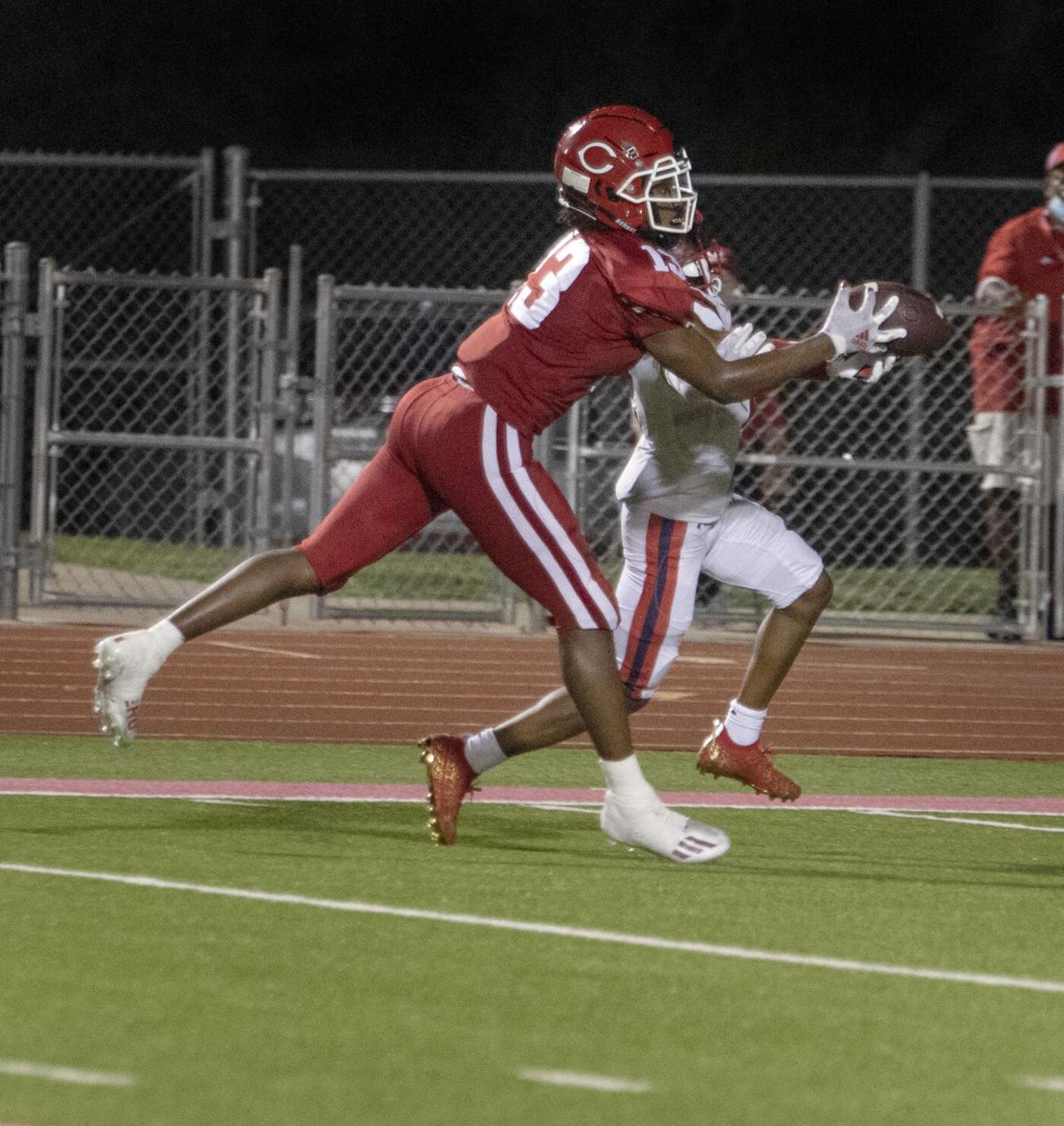 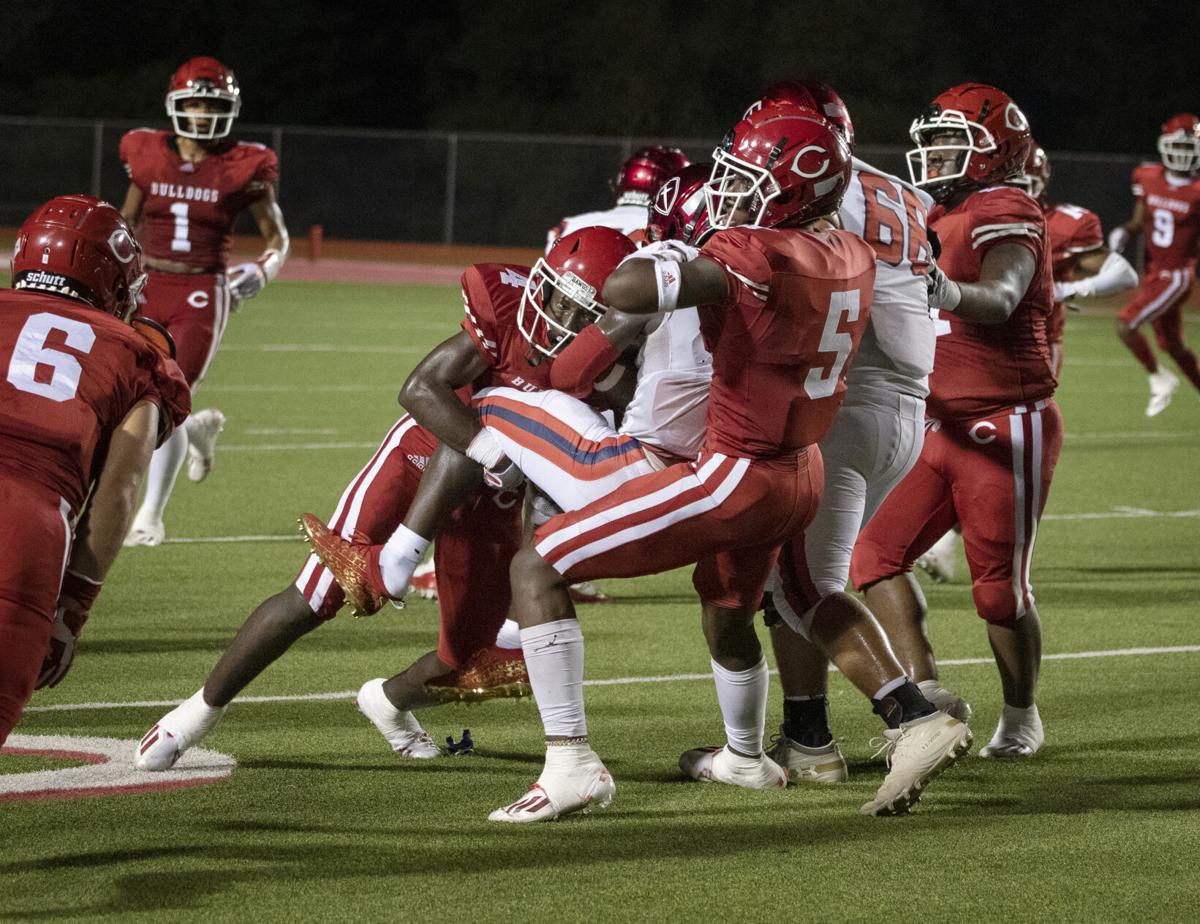 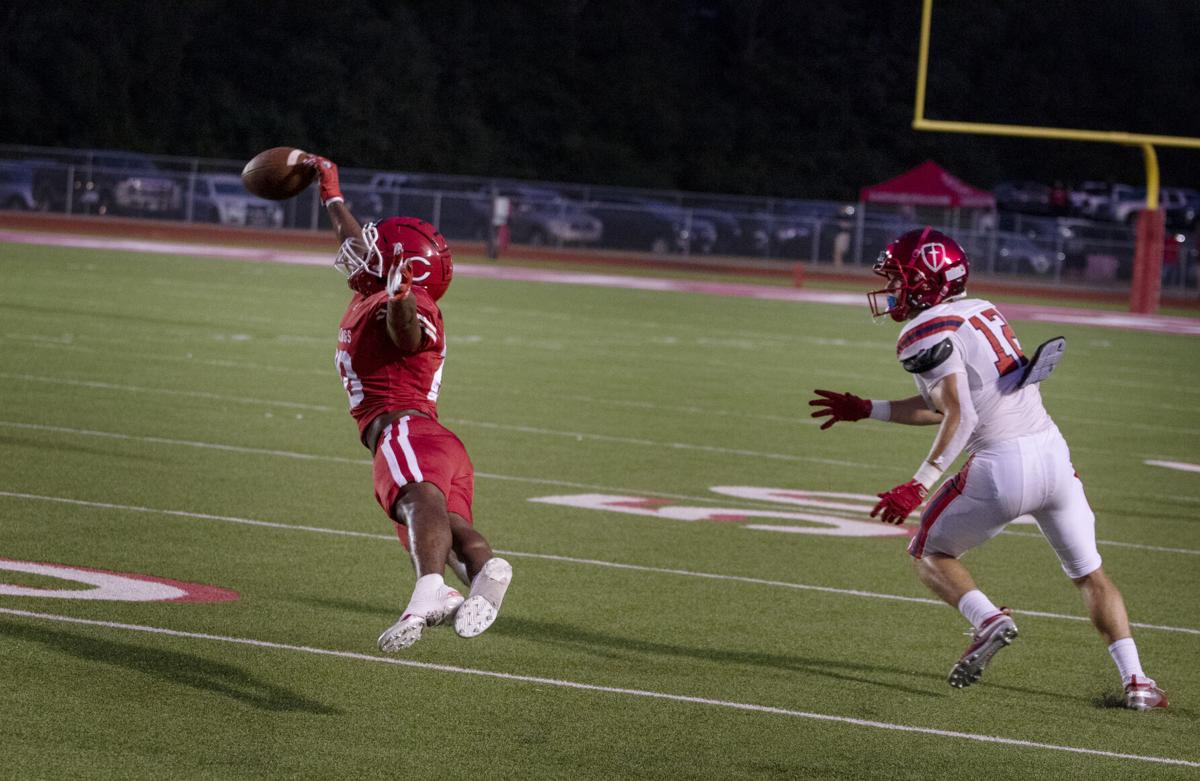 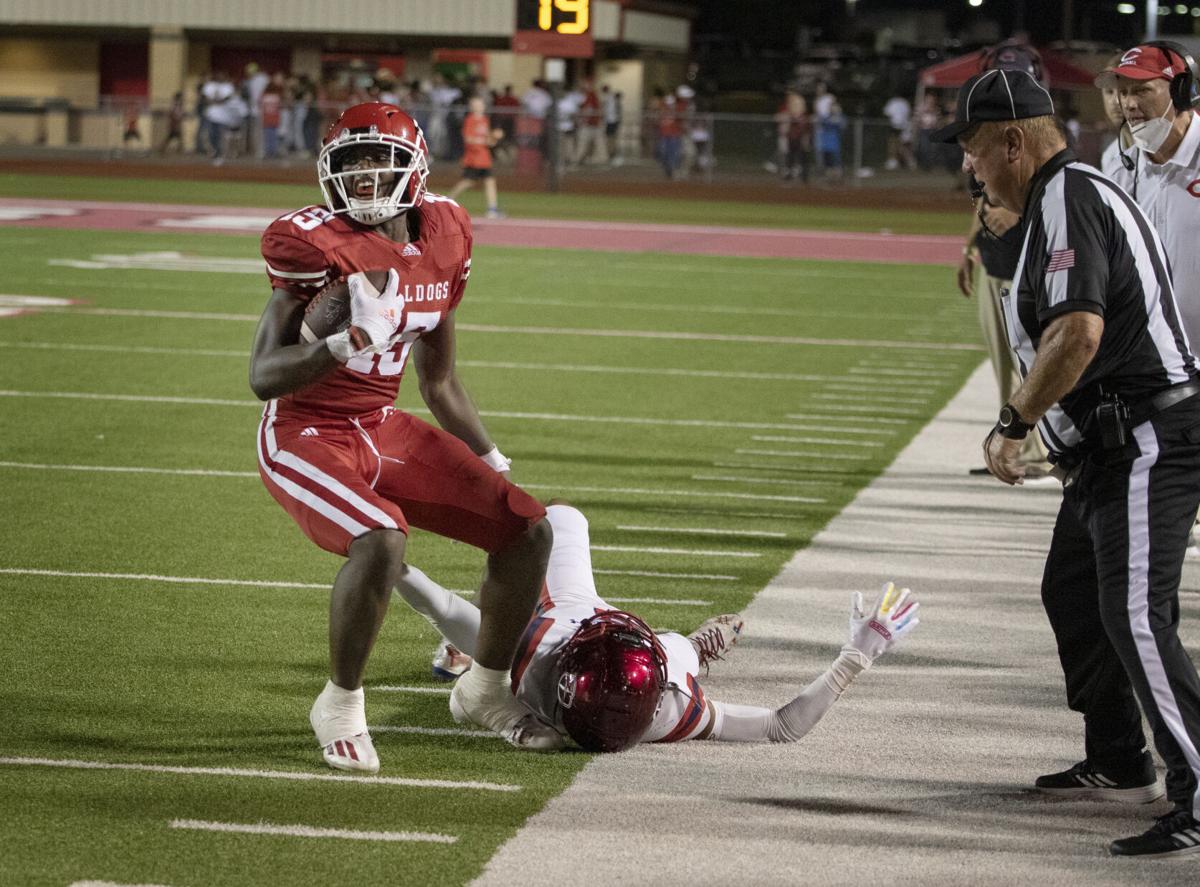 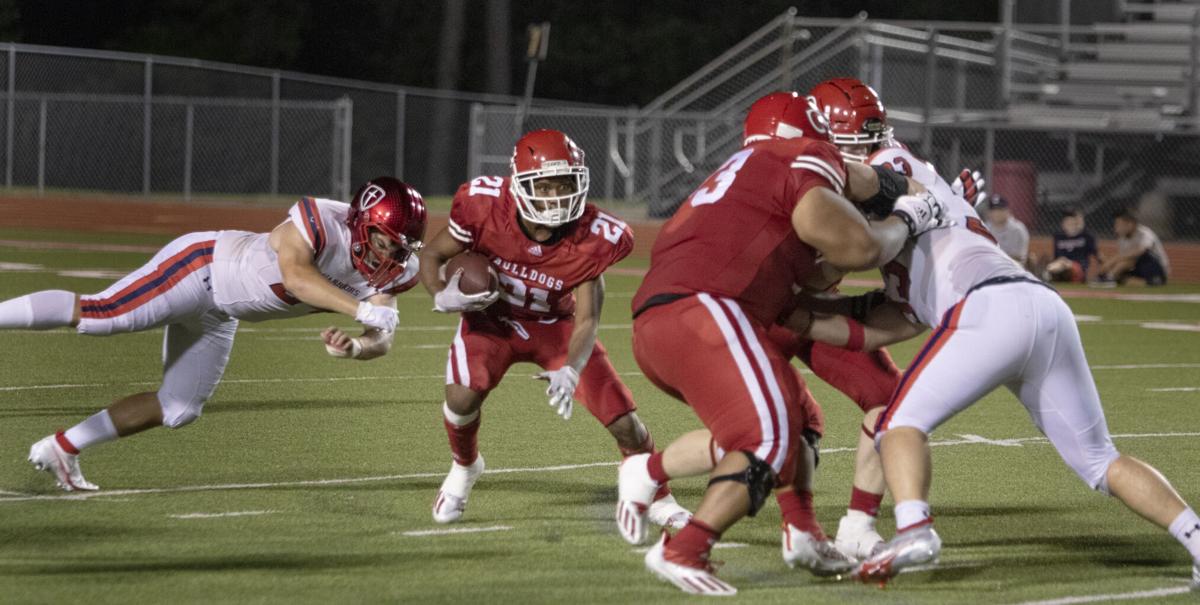 Carthage running back Zsema’D Williams waits for his blockers to open up a hole to run in during Friday’s season-opener against Cornerstone Christian. 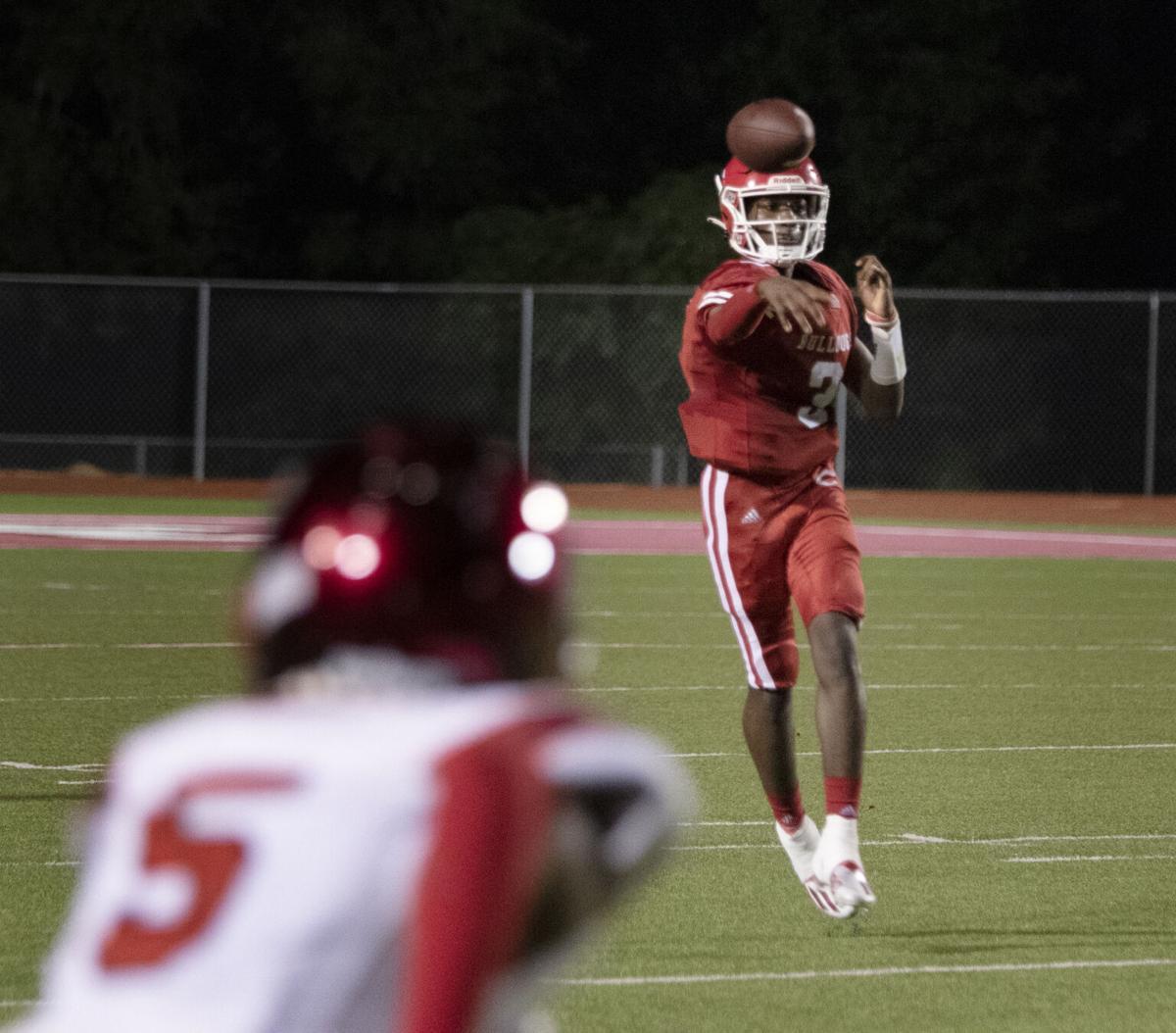 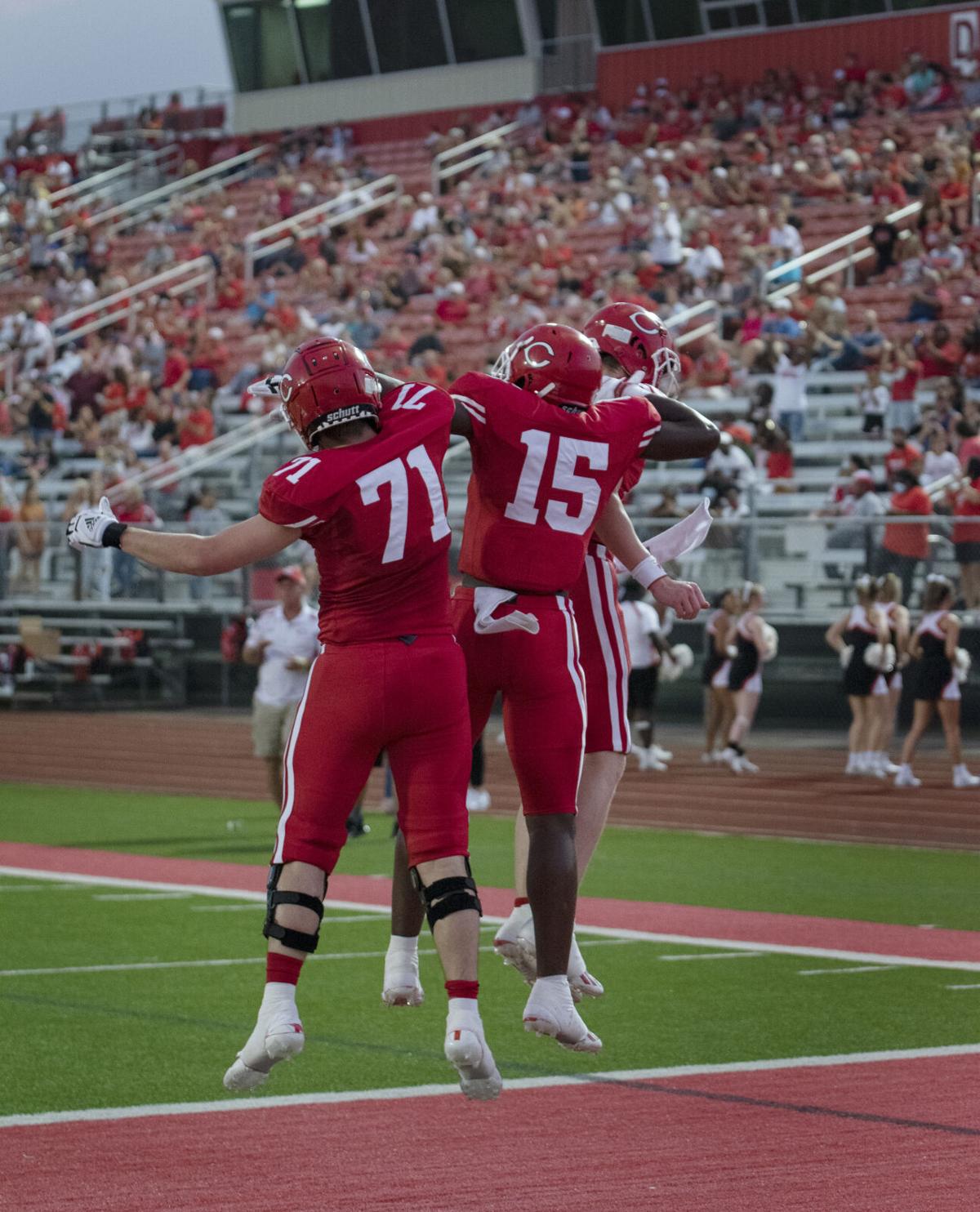 Carthage’s Kadadriane Bell catches a touchdown pass in the first half of Friday’s game against Cornerstone Christian. The Bulldogs defeated the Warriors 42-14.

Connor Cuff (10) runs down the field Friday night in the game against Cornerstone Christian.

Carthage running back Zsema’D Williams waits for his blockers to open up a hole to run in during Friday’s season-opener against Cornerstone Christian.

CARTHAGE — What started off great turned a little shaky but ended greatly for the Carthage Bulldogs.

Carthage outscored visiting Cornerstone Christian-San Antonio by 21 points, including two defensive scores in the second half, and rolled to a 42-14 victory in Carthage’s first home game of the season.

“It was sloppy at times but we kept playing,” Carthage Coach Scott Surratt said. “Right now I think we are going to play ugly until we can get a rhythm offensively.”

It sure is convenient to have as talented of a defense the Bulldogs have while the offense works to fully get in sync in the early part of the season.

Senior Brandon King had a 90-yard fumble recovery scoop and score in the third quarter, and Keddrick Harper delivered the exclamation point for Carthage as the junior intercepted Cornerstone Christian quarterback Diego Narezo and raced 62 yards for a pick-six to extend the Bulldogs’ lead over the Warriors to 42-14 with 4:40 left in the game.

“The line backing core and defensive line just got on us during practice,” Harper said about making plays. “Brandon King and I try to build a relationship with him and he’s straight business but I’m up one with the pick and he’s up one with the fumble recovery. It’s just competitive on the whole defense.”

Surratt played two quarterbacks for the second-straight week, and both played stellar on Friday. Connor Cuff started and played the entire first half, throwing for 115 yards and two touchdowns on 10-of-17 passing, and senior Javarian Roquemore played the entire second half and threw for 134 yards and a touchdown while completing 9-of-12 passing, including completing his last eight throws.

Carthage (2-0) started the game by going right down the field with a 13-play, 77-yard drive that was capped by a 16-yard touchdown pass from Cuff to Kadadriane Bell.

Cornerstone Christian (0-2) scored their lone score of the first half on 4-and-goal from the two on a touchdown pass from Narezo to Ivan Hoyt.

The Bulldogs led the Warriors 14-7 going into halftime.

After King’s 90-yard scoop and score, the Warriors cut Carthage’s lead down to seven at 21-14 when Narezo hit Hoyt on a wide receiver screen and Hoyt raced 72-yards to pay dirt. Cornerstone Christian cut Carthage’s lead to 21-14 with 2:43 left in the third.

“We just came out here and executed — hard work pays off,” Harper said. “As for the pick-six, I was just playing hard, I knew he over threw it, the only thing was heading down the sideline. I love track, so I turned on the burners.”

Noah Paddie had 71 yards receiving on six catches, including a 33-yard touchdown reception, Bell had five catches for 62 yards and a score, and Braeden Wade had four catches for 58 yards and a touchdown for Carthage.

“We went into halftime and knew we had to step it up,” Bell said. “We had to go out and play harder and that’s what we did.”

Kip Lewis had an interception and forced a fumble for the Bulldogs.

The Bulldogs threw the ball very well in their home-opener but struggled to gain any real consistency rushing for the second-straight week.

“I’m disappointed with how we ran the ball again,” Surratt said. “I thought we could’ve ran the ball a bit better tonight. We take that stuff personal and we’ll work on that and see if we can get it taken care of.”

Surratt says he’s looking to get the running game in a position where it can succeed once the Bulldogs get back in action in on Sept. 24 when they host Gilmer in a rematch from the Class 4A Division II State Championship last season.

Last season, the Bulldogs had to wait three weeks before playing the Buckeyes because of COVID-19.

Surratt feels his team could use this two-week break before finishing up with their toughest two-game stretch of the regular season with Gilmer and Pleasant Grove in back-to-back weeks.

“I think this group could use the two weeks,” Surratt said. “Hopefully get everybody healthy and back from sickness or whatever. No. 1 get better daily and if we do that we’ll be OK. My coaching staff are perfectionists and until we play perfect, we’re going to keep correcting every mistake we make and see if we can get better the next game.”