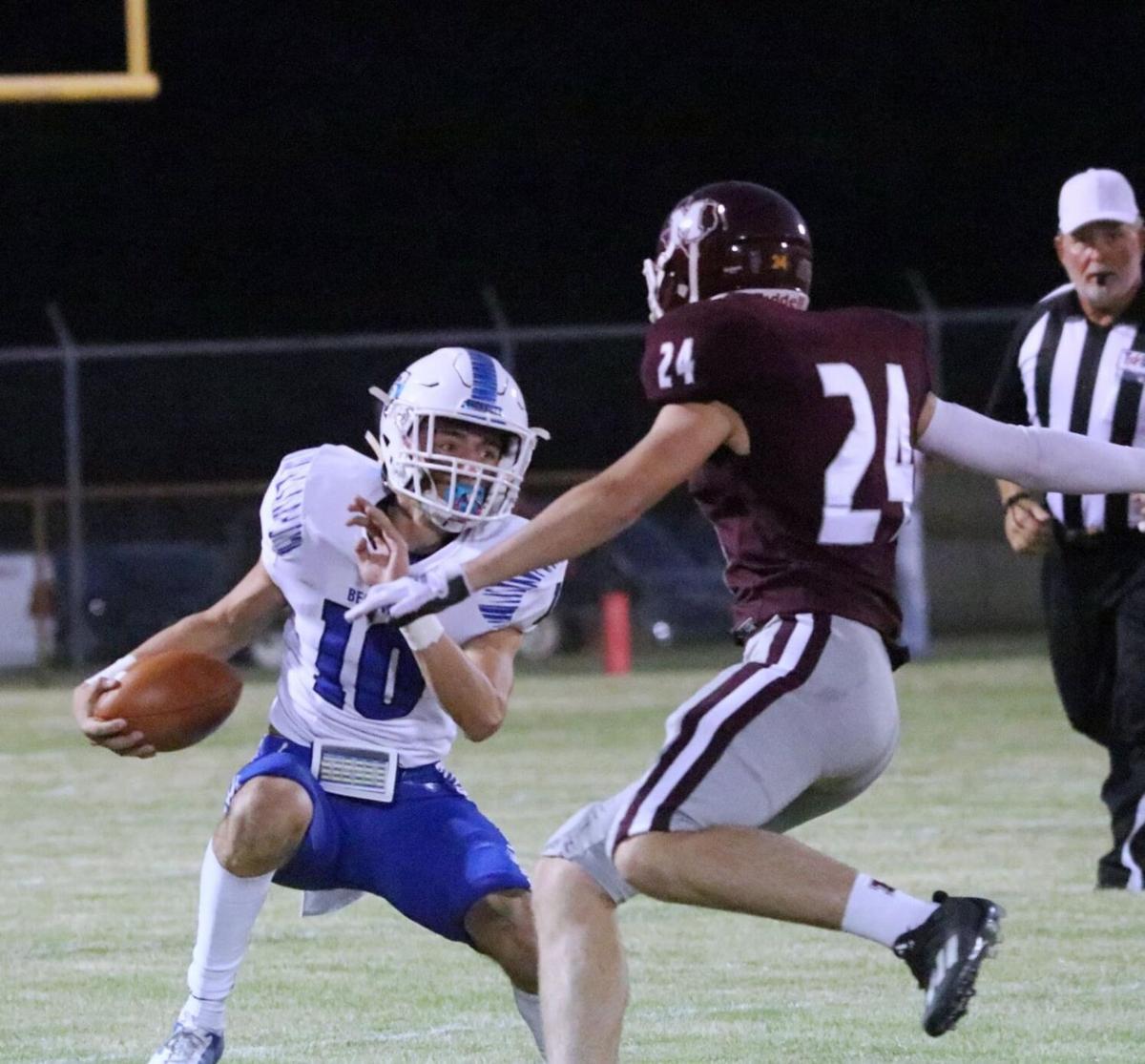 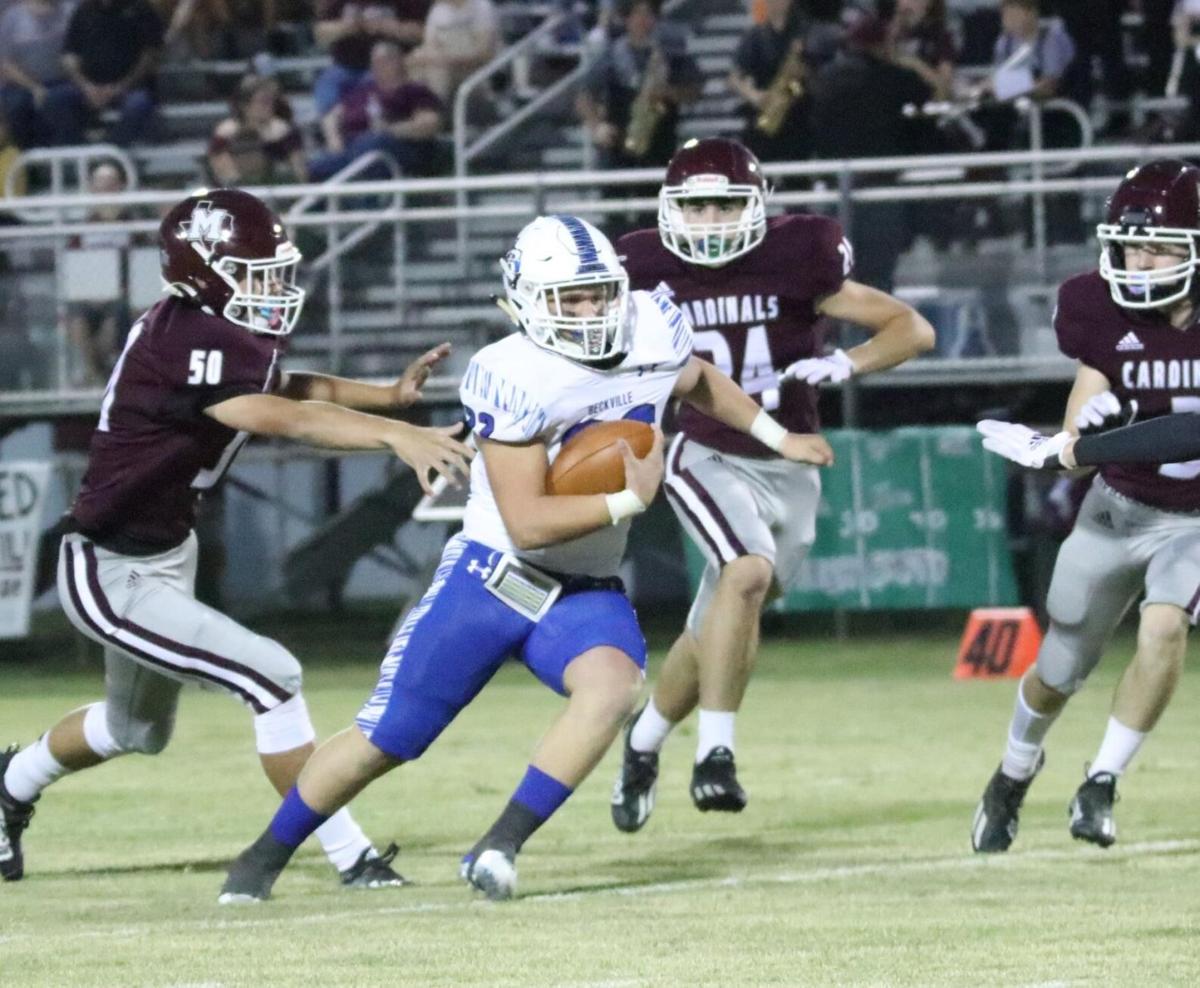 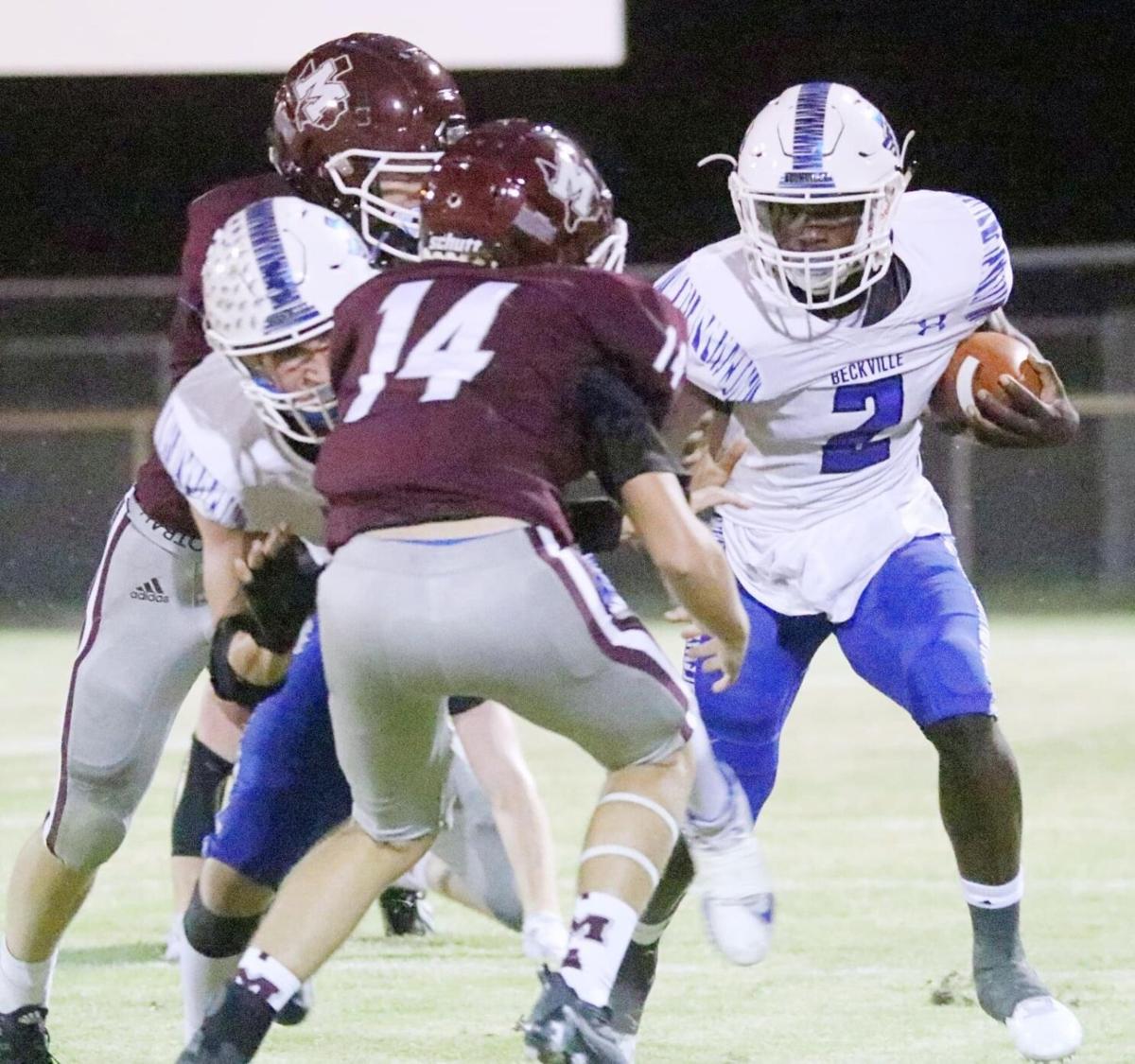 Beckville running back J’Koby Williams runs the ball in last Friday’s game at Maud. Williams scored five touchdowns including rushing, receiving and throwing a touchdown pass in the game. 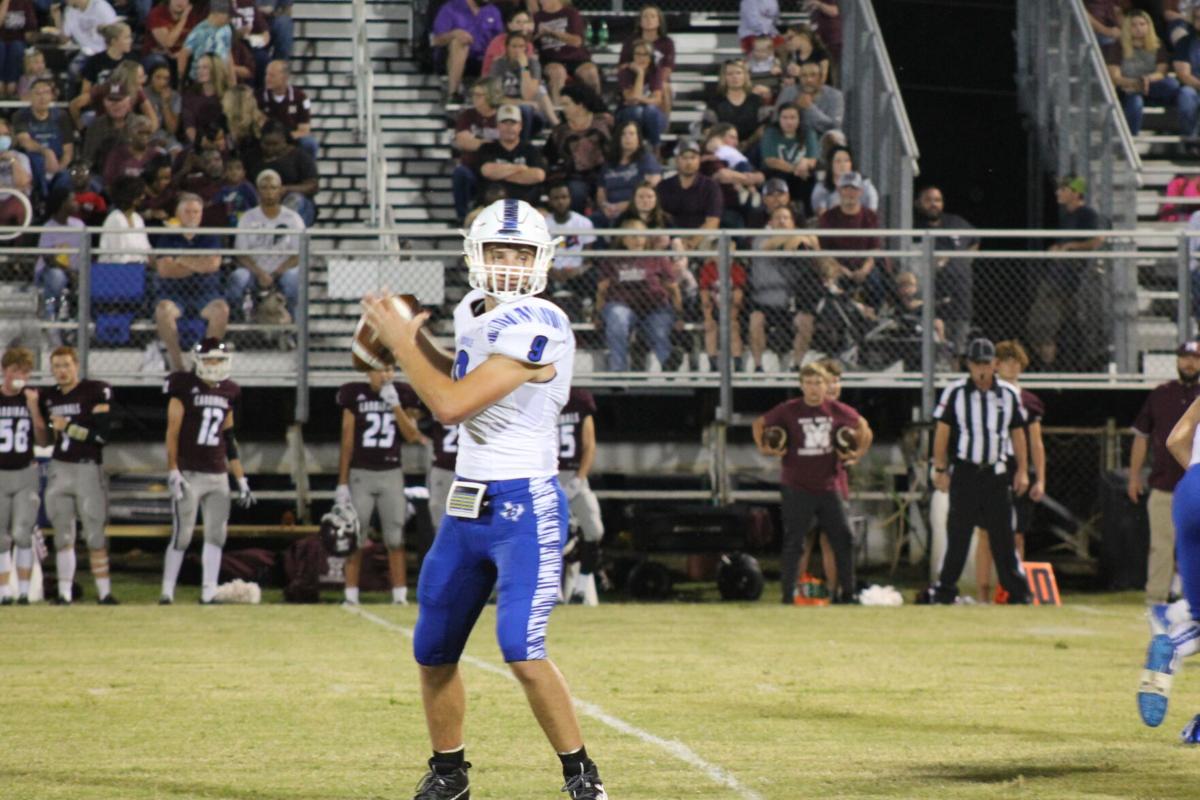 Beckville quarterback Ryan Harris gets set to throw a pass. Harris threw for 224 yards and three touchdowns in the Bearcats’ 40-0 shutout victory over Maud. 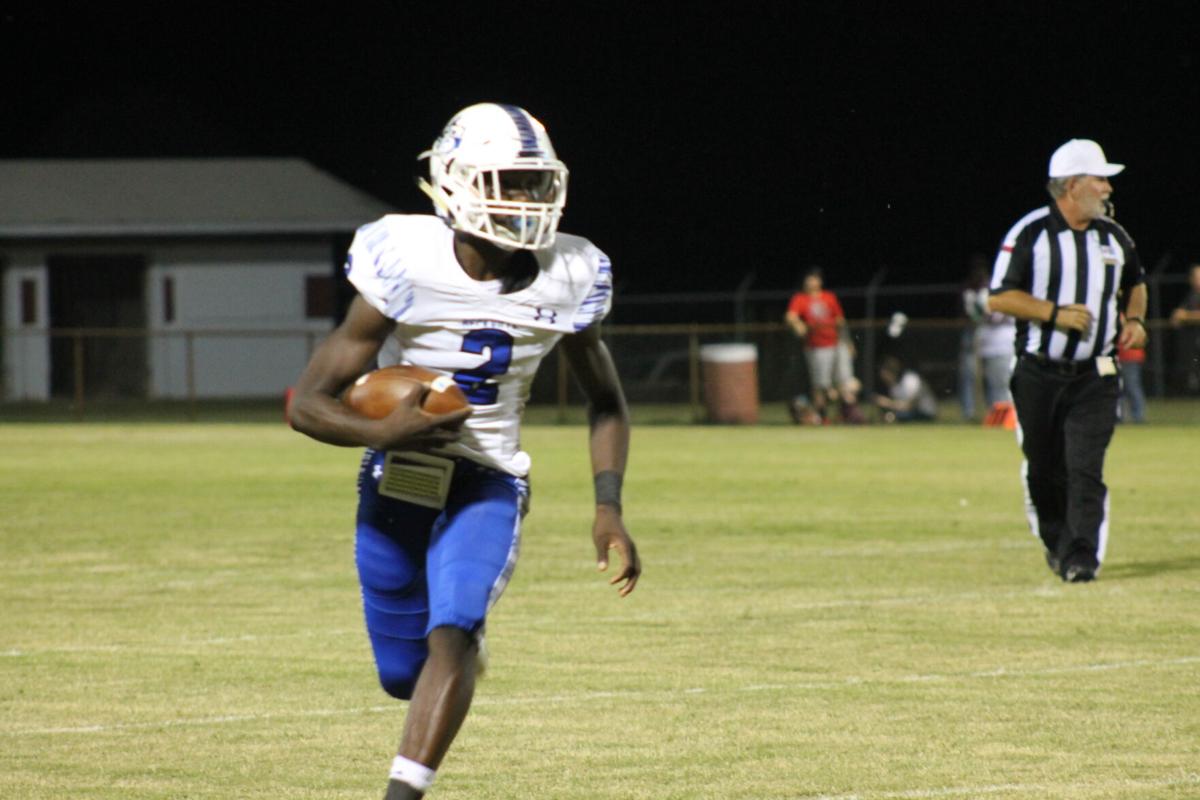 Beckville running back J’Koby Williams runs for positive yardage. The sophomore was responsible for five touchdowns in the Bearcats’ 40-0 victory at Maud. 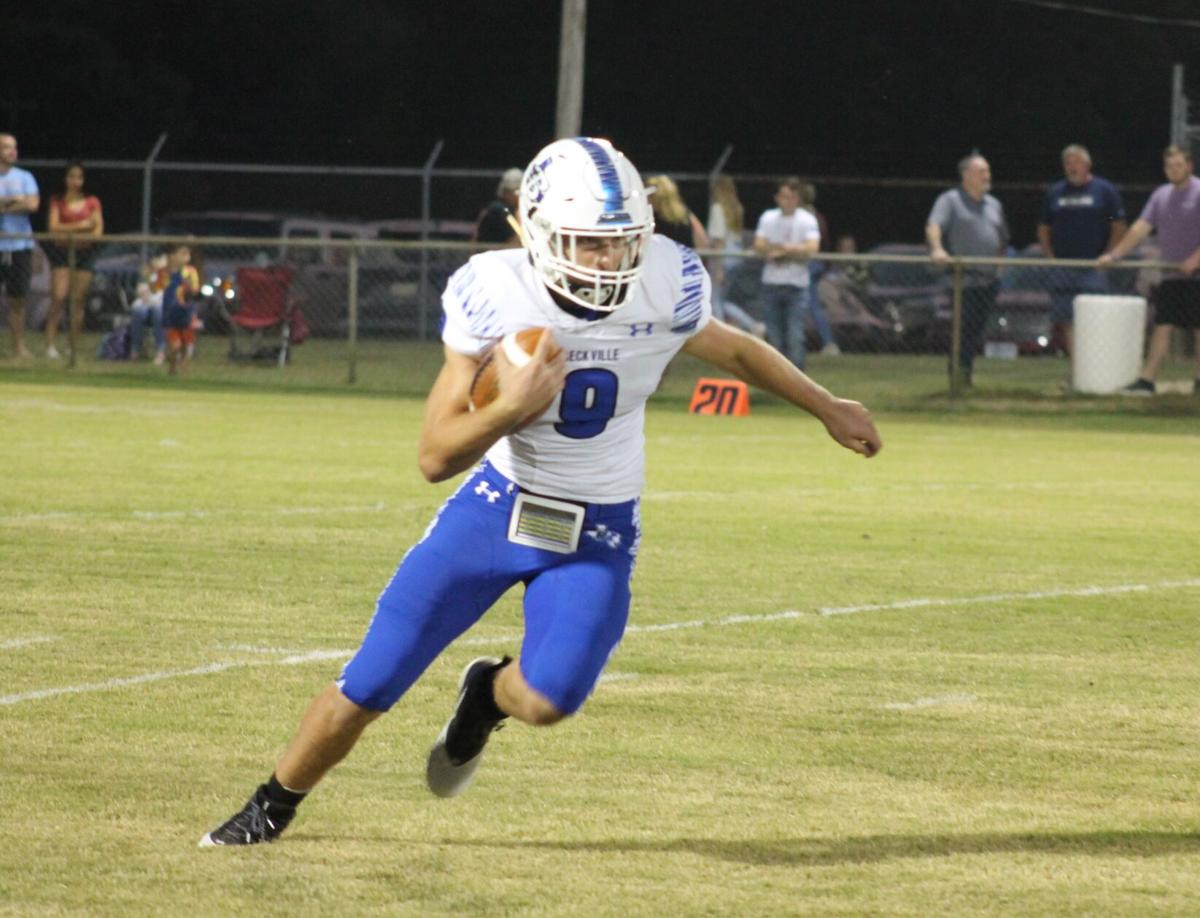 Beckville running back J’Koby Williams runs the ball in last Friday’s game at Maud. Williams scored five touchdowns including rushing, receiving and throwing a touchdown pass in the game.

Beckville quarterback Ryan Harris gets set to throw a pass. Harris threw for 224 yards and three touchdowns in the Bearcats’ 40-0 shutout victory over Maud.

Beckville running back J’Koby Williams runs for positive yardage. The sophomore was responsible for five touchdowns in the Bearcats’ 40-0 victory at Maud.

MAUD — Beckville sophomore J’Koby Williams scored five touchdowns in three different ways to lead the way as the Bearcats wrapped up their three-game road trip unblemished to start the season with a 40-0 shutout victory over Maud Friday night at George Frost Field.

Williams showed he was just as lethal catching the ball as running, as the sophomore had three first half touchdowns.

Williams caught four passes for 95 yards and had receiving touchdowns of 18 and 49 yards. The sophomore also scored the first score of the game with a 15-yard touchdown run on the game’s opening drive. Williams rushed for a game-high 115 yards to along with his two scores and threw for a touchdown when he hit quarterback Ryan Harris for a nine-yard touchdown pass.

“The o-line stepped up,” Williams said. “Coming into this game we knew the o-line was bigger than us and they stepped up and did their part. We got to the end zone a lot of times.”

In what could’ve potentially played as a trap game for Beckville, getting points on the board early eliminated any doubt of the Bearcats looking ahead to next week.

Last season the Bearcats beat the Cardinals 75-14 at home.

Beckville took a 27-0 lead over Maud going into halftime in a half where Harris was as efficient has he’s ever been throwing the ball.

“Our kids played pretty well upfront to handle their size,” Beckville coach Cody Ross said. “We go the ball rolling really well and scored first. We got some stops early on defense and it gave us the opportunities to score some more.

“I was really pleased with our kids and how they played. Defensively had a heck of a night only gave up a total of 39 yards on the night so it was a good night for our kids and a great win for our program.”

Harris was super efficient throwing the ball in the first half, throwing for 200 yards and three touchdowns while completing 8 of his 12 pass attempts.

The senior started off the game 8-of-9 passing and finished with 224 yards passing on 10-of-14 passing, including three touchdowns.

“That was one of the best games he’s had throwing the football,” Ross said. “We’re gradually working on getting better in that aspect so that we can give ourselves a chance all the way around and not just be a run only team. Was really proud of him and his decision making, he threw the ball really well.”

Jae’D’yn Slaughter had an interception for the Bearcats.

In all, Beckville held Maud quarterbacks Devin Myrtle and Cason Lamb to a combined 17 yards passing on 1-of-9 passing, including an interception.

The Bearcats defense was just as stout against the run as the Cardinals combined for just 12 rushing yards on 31 carries.

“Our kids played as hard as they can play,” Ross said. “Adam Gregory had one heck of a night he had 17 tackles and five sacks so he had a really incredible night, really all the kids did. It’s the ultimate team football and they really played well as a team Friday night.”

Beckville came into the game averaging 48 points per game through two contests in wins over Joaquin and Harleton.

After three-straight road games to start the season, Beckville will finally get to play at home next week.

The Bearcats will host West Sabine next Friday Sept. 17 at 7:30 p.m., and it will also be homecoming.

“Everybody loves being undefeated, no doubt about that,” Harris said. “We’re ready for a home game, we’ve been traveling three games now, we want to show what we can do on our home field.”