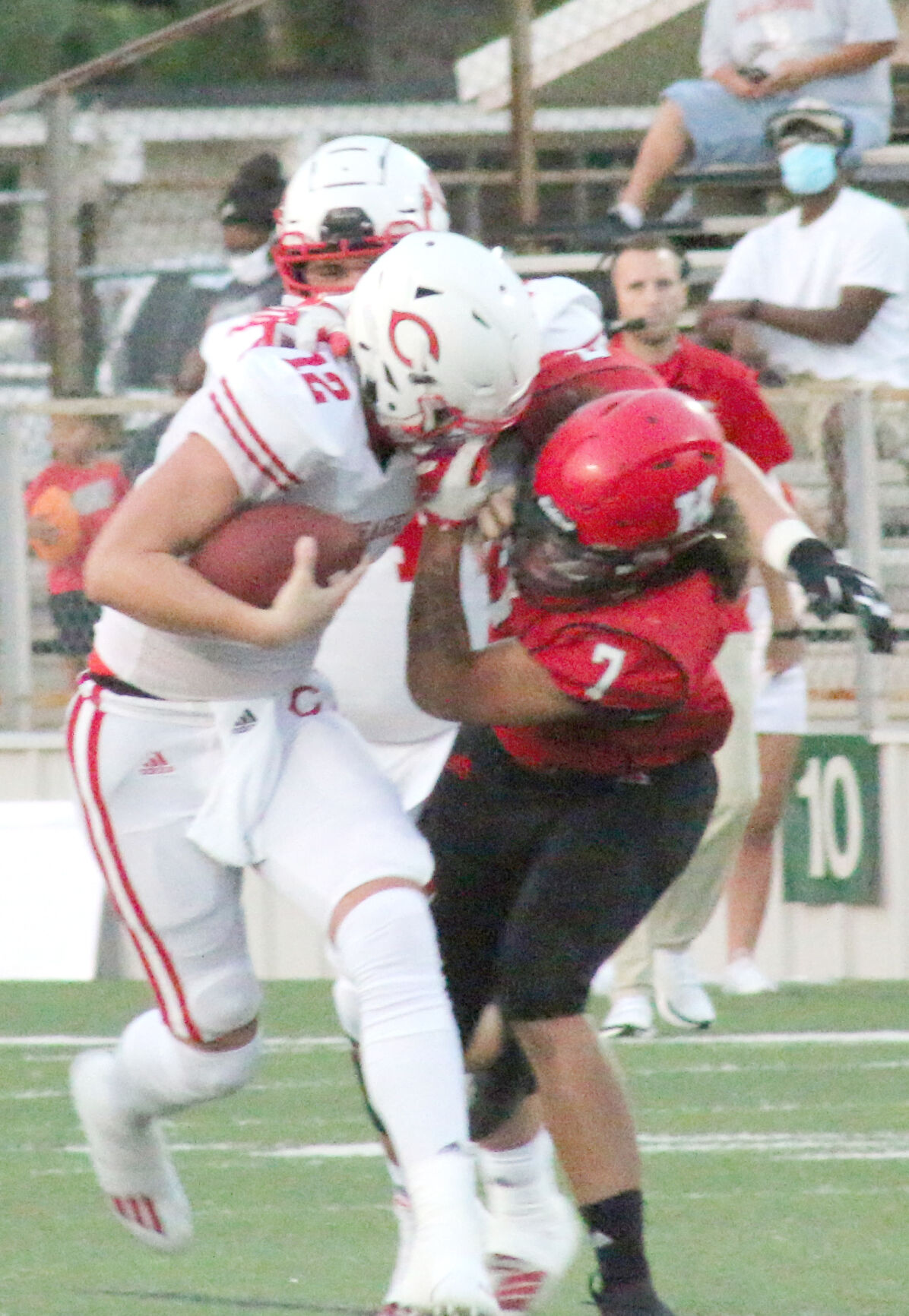 Carthage quarterback Kai Horton (12) is brought down by Alex Chavez after a short gain. Horton rushed for 29 yards and was sacked only once in the Bulldogs' 27-7 win. 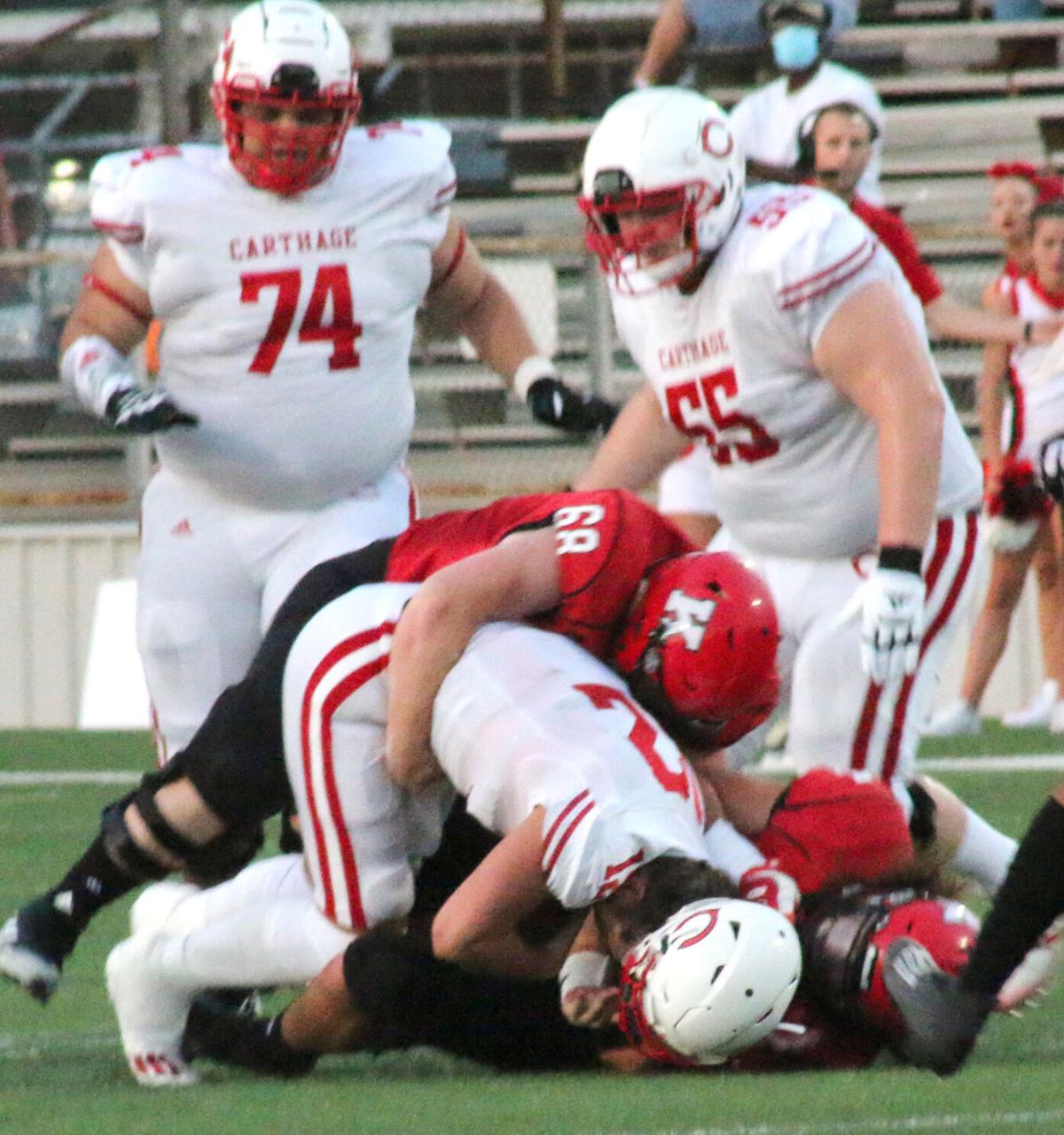 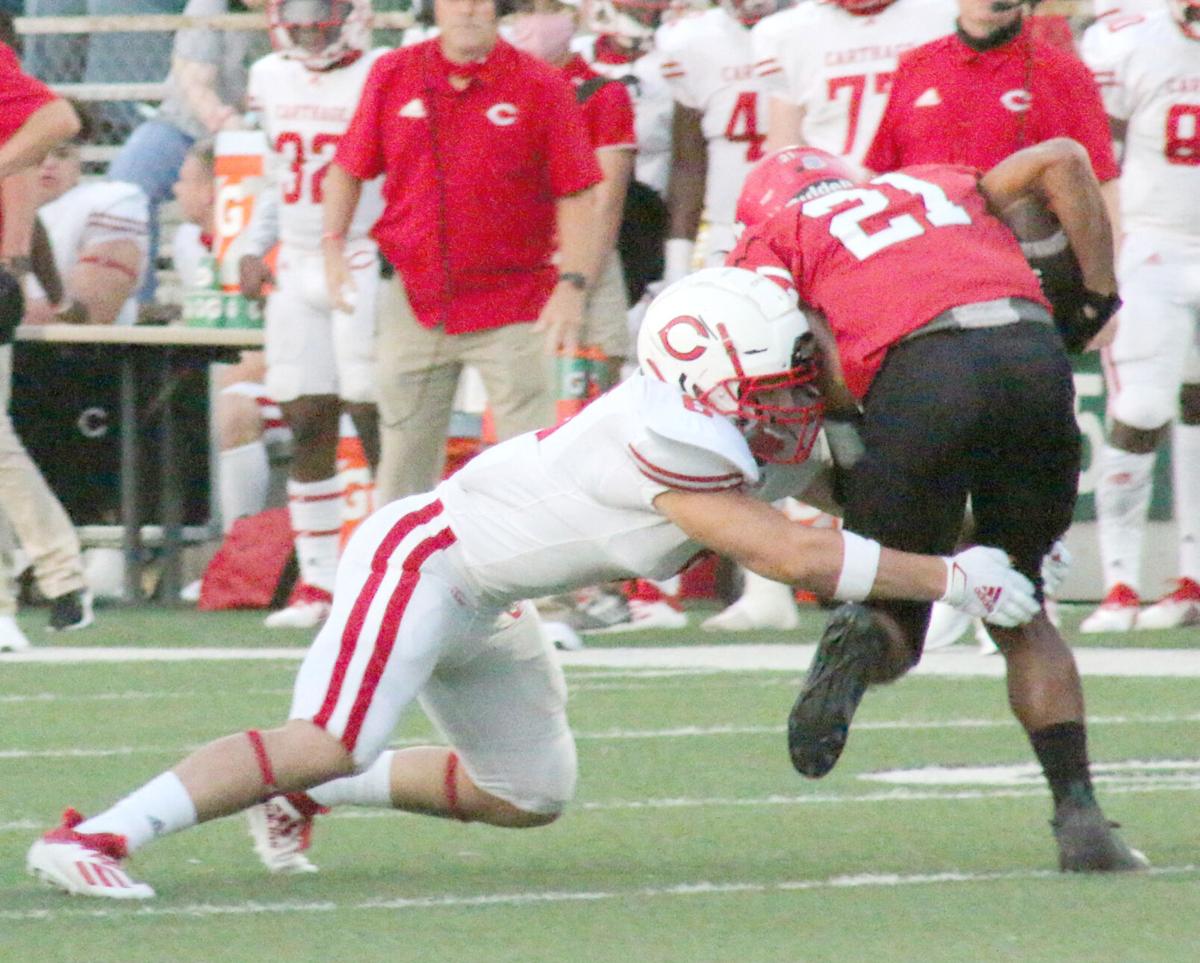 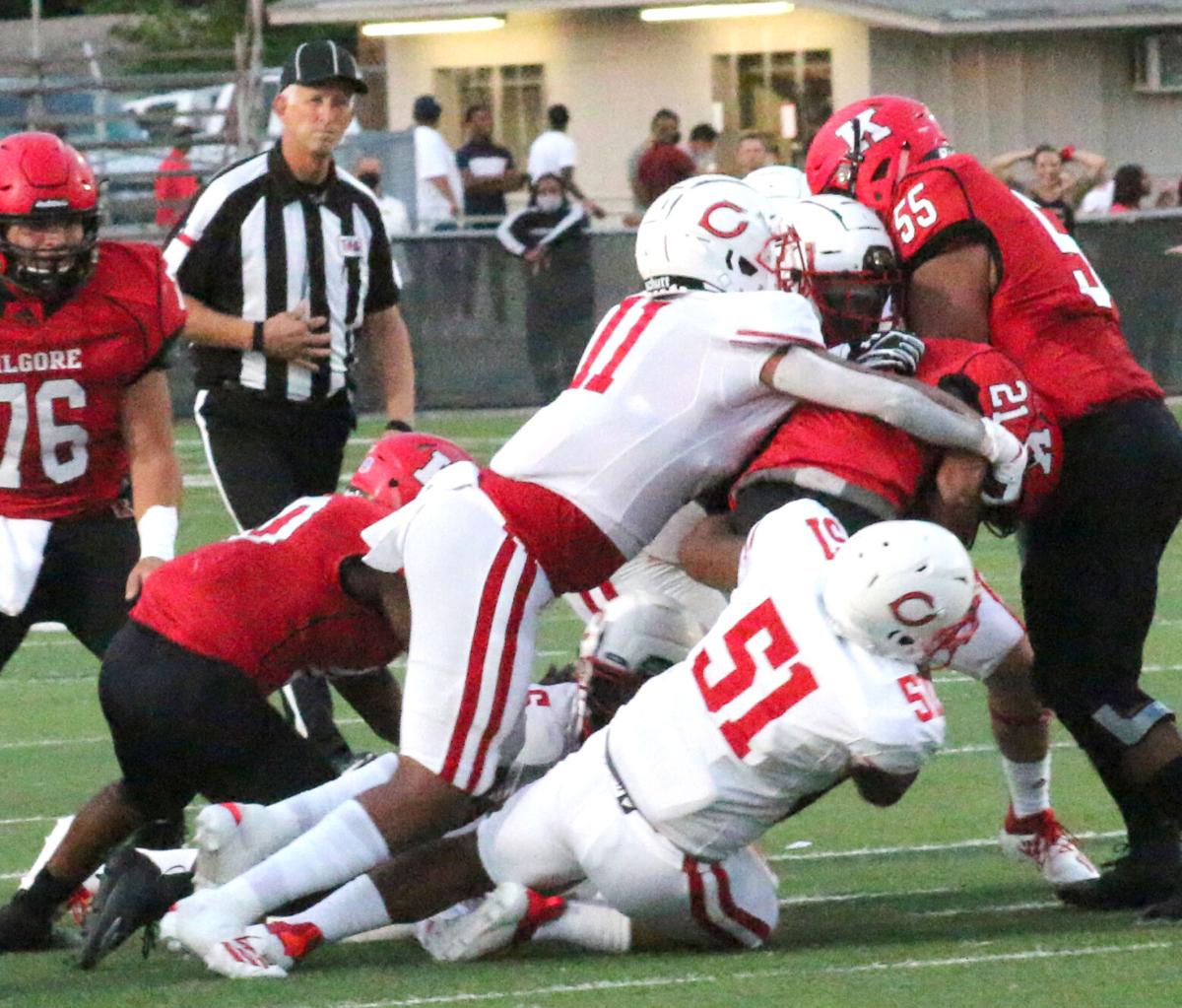 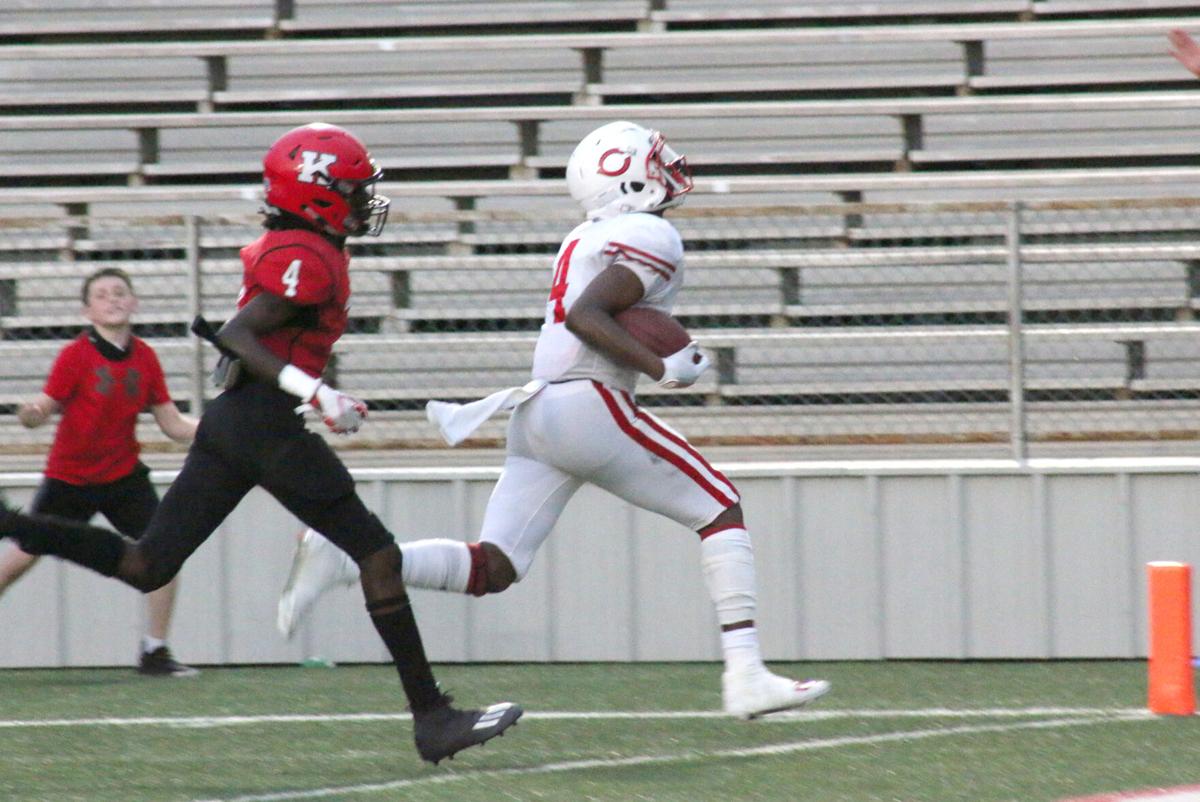 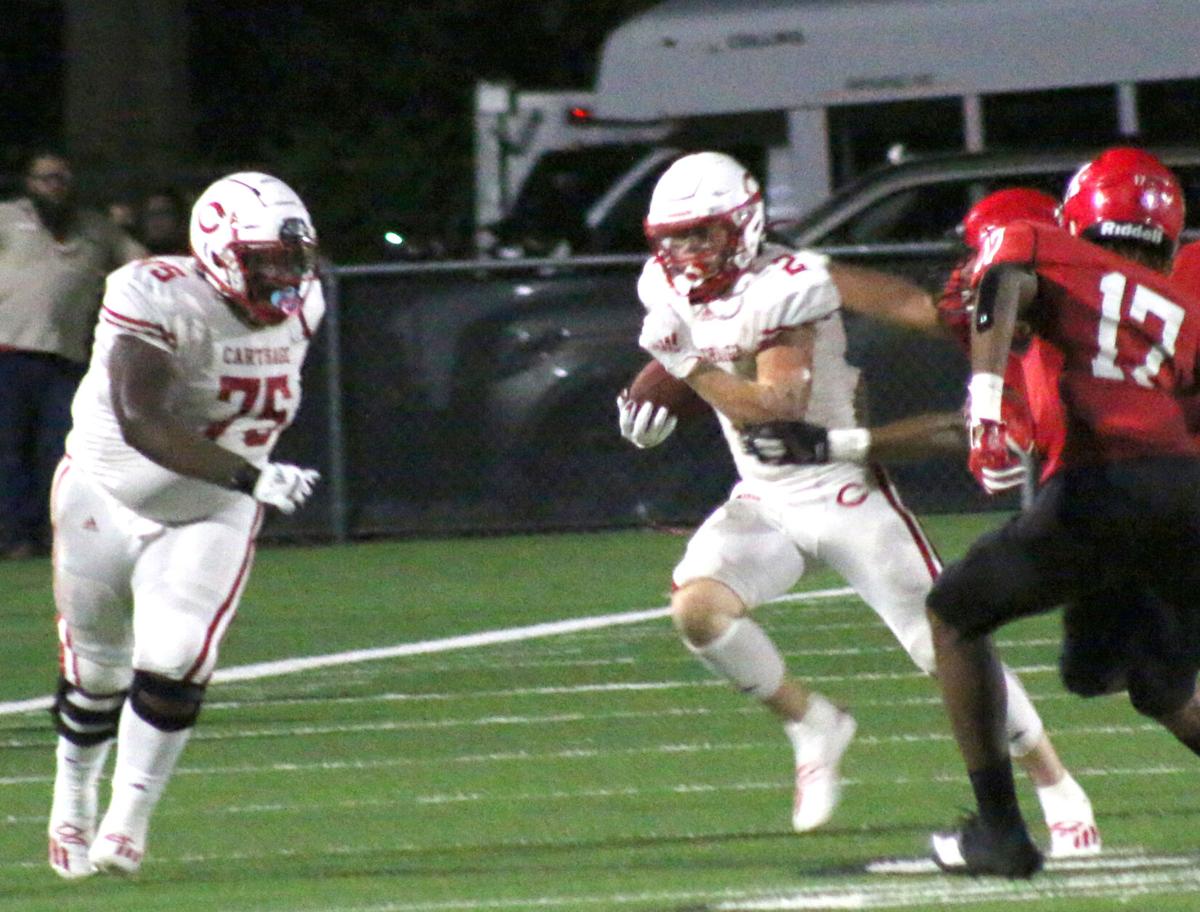 Carthage running back Mason Courtney (2) runs to the outside where he has teammate Tee Kellum (75) ready to block for him. Courtney scored three touchdowns in the win. 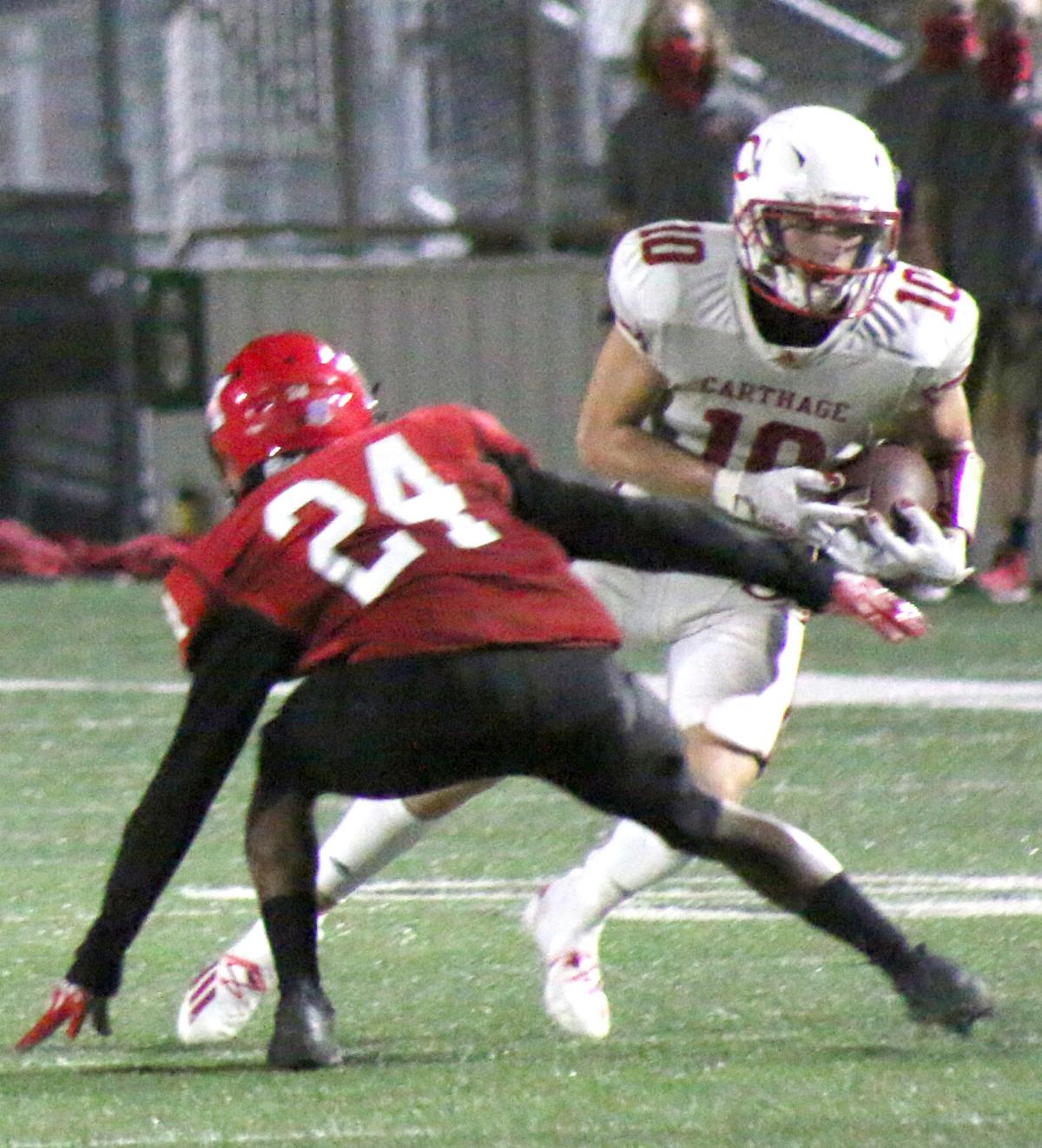 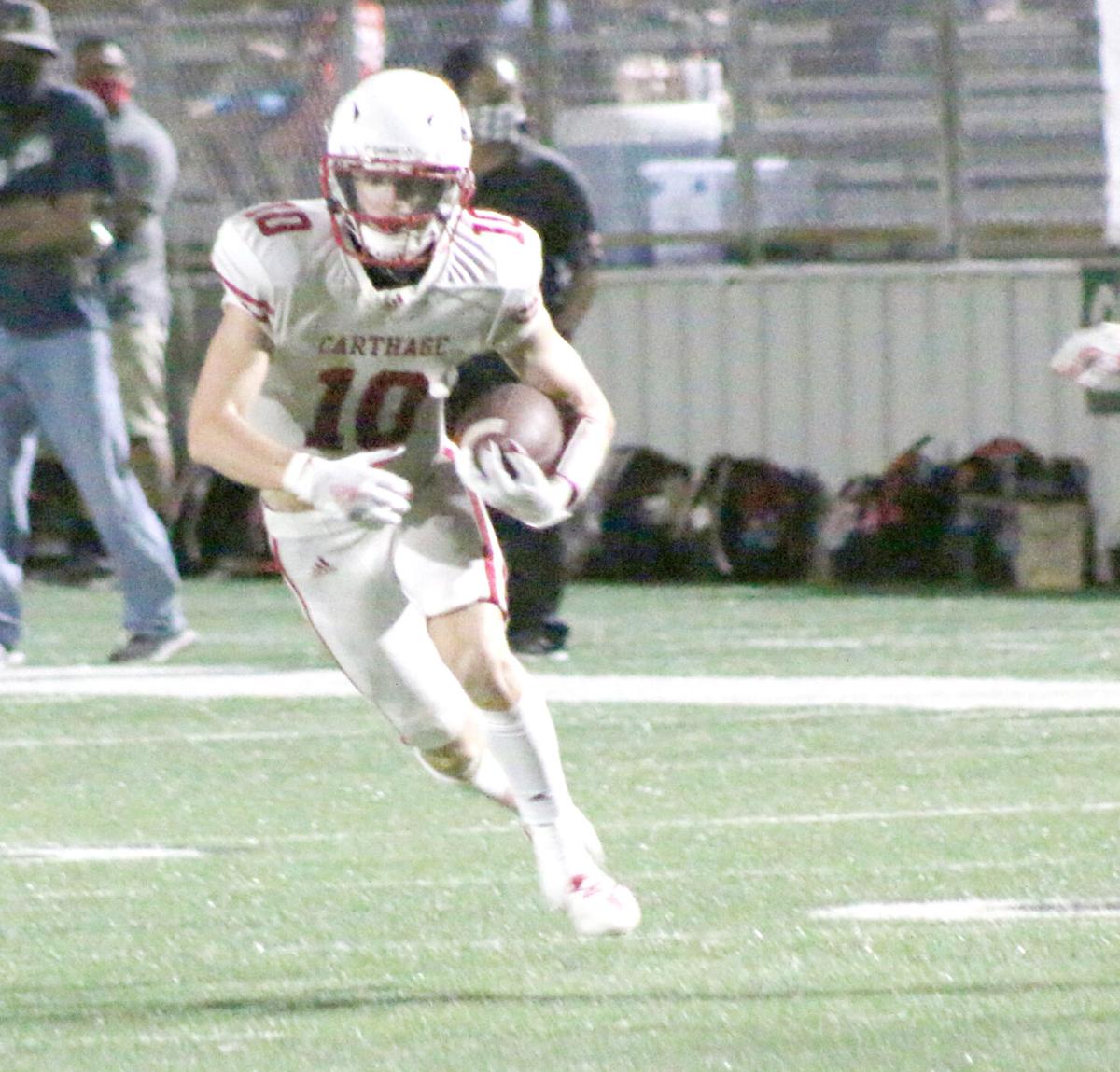 Carthage quarterback Kai Horton (12) is brought down by Alex Chavez after a short gain. Horton rushed for 29 yards and was sacked only once in the Bulldogs' 27-7 win.

Carthage running back Mason Courtney (2) runs to the outside where he has teammate Tee Kellum (75) ready to block for him. Courtney scored three touchdowns in the win.

KILGORE — The defense was a big question mark for the Carthage Bulldogs heading into the season opener last Friday night.

With only two starters and a part-time starter returning on the defensive side of the ball, it appeared the offense might have to outscore teams early.

The Dawgs' defense answered a lot of questions in the opener.

Carthage held Kilgore to minus 25 yards rushing in the first half and only had one breakdown that allowed the home team's only score as they grabbed a 27-7 win in R.E. Saint John Memorial Stadium.

The top-ranked Bulldogs have a bye this week before traveling to Orange the following week for a 7 p.m. game with Little Cypress-Mauriceville.

In all, the Bulldog defense had five 3-and-outs, collected four turnovers, had four sacks and held Kilgore to minus 25 yard rushing in the first half.

"I thought the defense played very well," Head Coach Scott Surratt said. "I wasn't happy how we responded after that long kickoff return of theirs. But it was a good start for the defense

IT was a god thing the defense got off to such a good start because the offense had some early troubles.

The first possession ended in a fumble and the second in an interception.

But the third time was the charm.

On a second-and-four Kai Horton threw deep and Montrelll Hatton was wide-open behind the secondary and he raced into the end zone for the 53-yard touchdown.

An interception by Wade got the ball back for the Bulldogs for their second score. A 40-yard pass to Craig McNew got the ball close and Mason Courtney carried the ball over from the 2.

It was the first of his three touchdowns on the night.

Carthage got the ball back with just 1:19 left in the first half on their own 40.

Horton hit Courtney for 15 yards and then McNew for 13. He scrambled 21 yards to put the ball at the 12. Courtney finished it from there and Carthage led 21-0 with 51.9 second left in the half.

Donovan Adkins already had one solid kickoff return so far in the game, but his return after the third Carthage TD was spectacular.

He weaved through the Bulldog special teams for 59 yards before Foster made a touchdown-saving tackle.

Starting from the Carthage 36 with just 29.1 left in the half, Kilgore started to click.

Dalton McElyea completed passes of 19 and 9 yards to Brian Brown, then threw a fad to Cade Pippen in the end zone for the nine-yard score with just 4.1 left.

After a 3-and-out by Kilgore and a 5-yard punt to start the second half, the Bulldogs went on a 12-play drive that covered 35 yards.Horton and MCNew hooked up for 10 yards on the drive and the quarterback scrambled for another sxi yards, but the rest of it was all Courtney as he carried it six times, taking it in from the 3.

The Bulldogs never got the PAT kick off, leaving the score at 27-7.

The Bulldog defense would later come up with a fumble recovery by Javare'a Brown and an interception Freddy Lynch.

"Offensively we had our moments," Surratt said. "We knew the rhythm would be off. We had a good rhythm a time or two and we had enough to win.

"I thought Craig McNew had a big night. He played well and made some big catches to get us in scoring position."

McNew was the top receiver with seven catches for 120 yards, Courtney had two catches for 19 and Brown had two for 12. Hatton had the one catch for 53 yards and Wade had one for 22 yards.

Foster led the defense with nine tackles and two sacks, while Kip Lewis had seven tackles, Morgan had five stops, Kylon Lister had three tackles and a sackand Lynch was one of five players wth two tackles, and he also had a sack and an interception.

"I thought we played hard, but we made a lot of mistakes," Surratt said. We had a lot of new people who were't used to the speed of playing on Friday night. It's going to take awhile to get sharp, but we're going to continue to get batter.

"IT was a good start and we got a win out of it. We finally got to hit someone else. If we focus on winning the daily battles, I think this team will be OK."