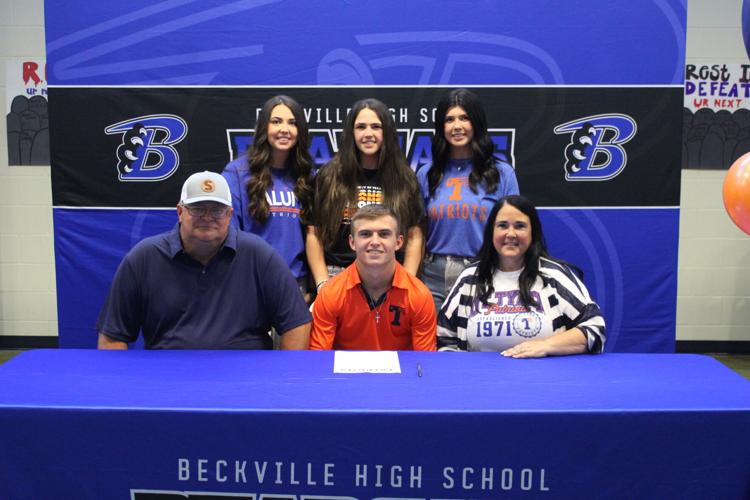 Beckville senior and sprinter Karter Jones (front center) signed his Letter of Intent to go to school and run track at UT Tyler in a ceremony on Wednesday afternoon. 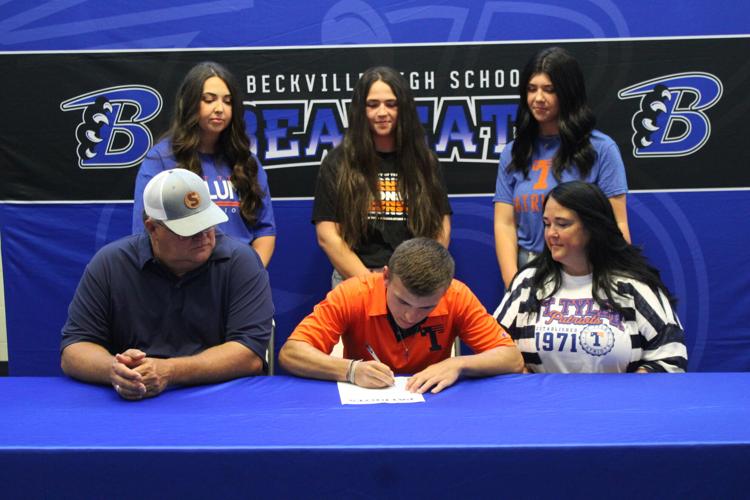 Beckville senior and sprinter Karter Jones (front center) signs his Letter of Intent to go to school and run track at UT Tyler as his family watches in a ceremony on Wednesday afternoon.

Beckville senior and sprinter Karter Jones (front center) signed his Letter of Intent to go to school and run track at UT Tyler in a ceremony on Wednesday afternoon.

Beckville senior and sprinter Karter Jones (front center) signs his Letter of Intent to go to school and run track at UT Tyler as his family watches in a ceremony on Wednesday afternoon.

BECKVILLE — Beckville High School senior and sprinter Karter Jones signed his Letter of Intent to attend and run track at the University of Texas at Tyler in a ceremony on Tuesday afternoon.

Jones, who captured 2A bi-district and area titles in the 100-meter dash this season, was joined by his family as he put pen to paper in front of his friends, coaches and the Beckville staff.

“It feels great, it’s always been a dream of mine to play any sport at the next level, especially track,” Jones said. “I’ve been in love with it since I was a kid, I love running. Me and (UT Tyler sprint coach Nick) Anthony over there hit it off and I really like the guy. I’m excited to go run for him.”

Jones, who plans to major in business management, said having two older sister that attended UT Tyler and being close to home helped make the decision for him.

“Tyler being close to home and my sisters going there helped me fall in love with the program,” Jones said. “I think Tyler was definitely the place I wanted to be.”

Beckville track Coach Shawn Hairgrove couldn’t have been happier for his senior to continue running at the next level — and praised the type of person UT Tyler will be getting.

“You can’t find a harder working kid,” Hairgrove said. “He’s one of the guys that was one of my first ones when I came here to Beckville. He’s hung with me, worked hard and it’s really paid off for him. We’re excited for him to get run at the next level.”

Playing to specialize in the sprint events, Jones has no issue doing whatever the team needs if called upon for other events.

Jones has done whatever necessary for the program at Beckville and doesn’t see things changing for the Division II school.

“He’s going to do whatever it takes for the team,” Hairgrove said. “He’s ran everywhere from the sprint relay to the mile relays to the 100 and 200. It’s been whatever we needed him to do and help our program be successful.”

Jones took fifth in the 100-meter dash running 11.15 at area and was part of the 4x400 meter relay team that took second place at the Region III championships.

The senior is also currently on the baseball team, where he’s a starting outfielder.

At UT Tyler, Jones will continue what he’s been doing these past few seasons at Beckville.

“Just to run fast and work hard,” Jones said. “Better myself and hopefully go win some medals there too. I’ve always seen myself as a yes-sir, do whatever the team needs me to type of guy. Whatever they want me to do, I’ll do it.”

Hairgrove said guys like Jones don’t come around all that often.

“You don’t have to worry about him doing the work,” Hairgrove said. “He’s a track guy and really loves the sport. I really think he’s going to do well at UT Tyler, I hate to lose him.”