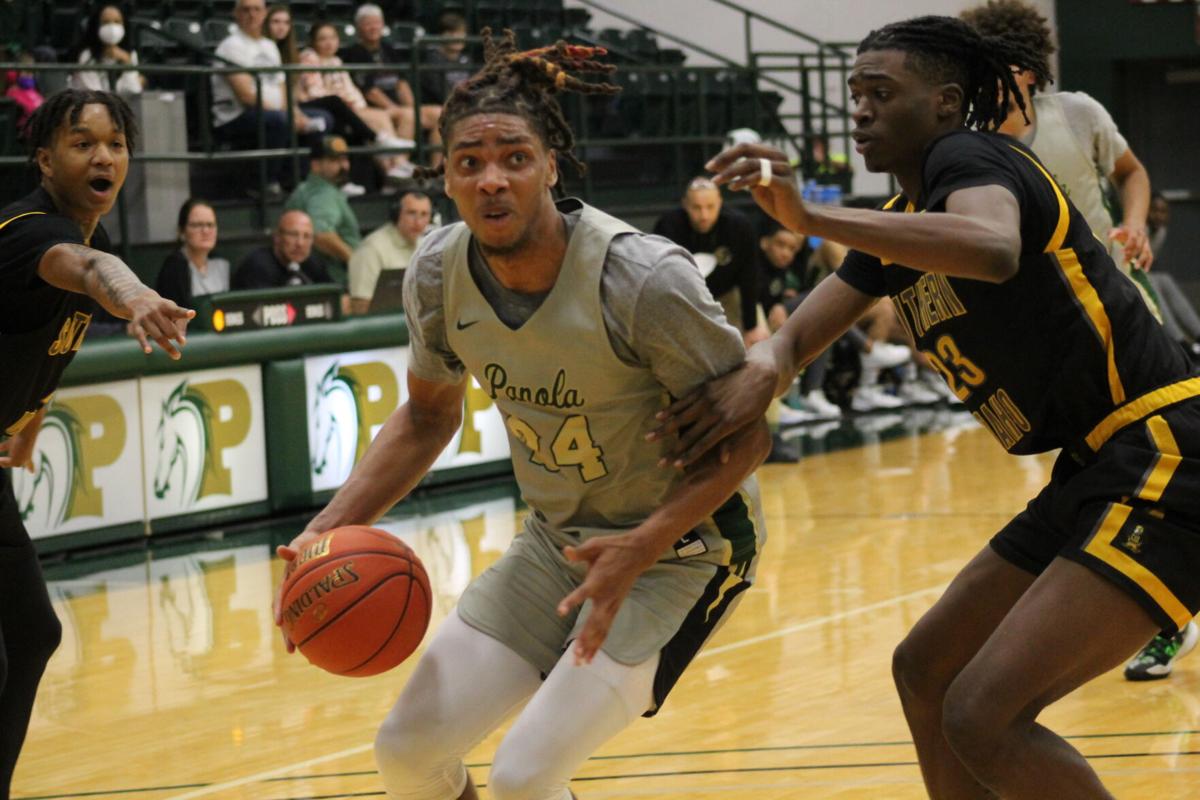 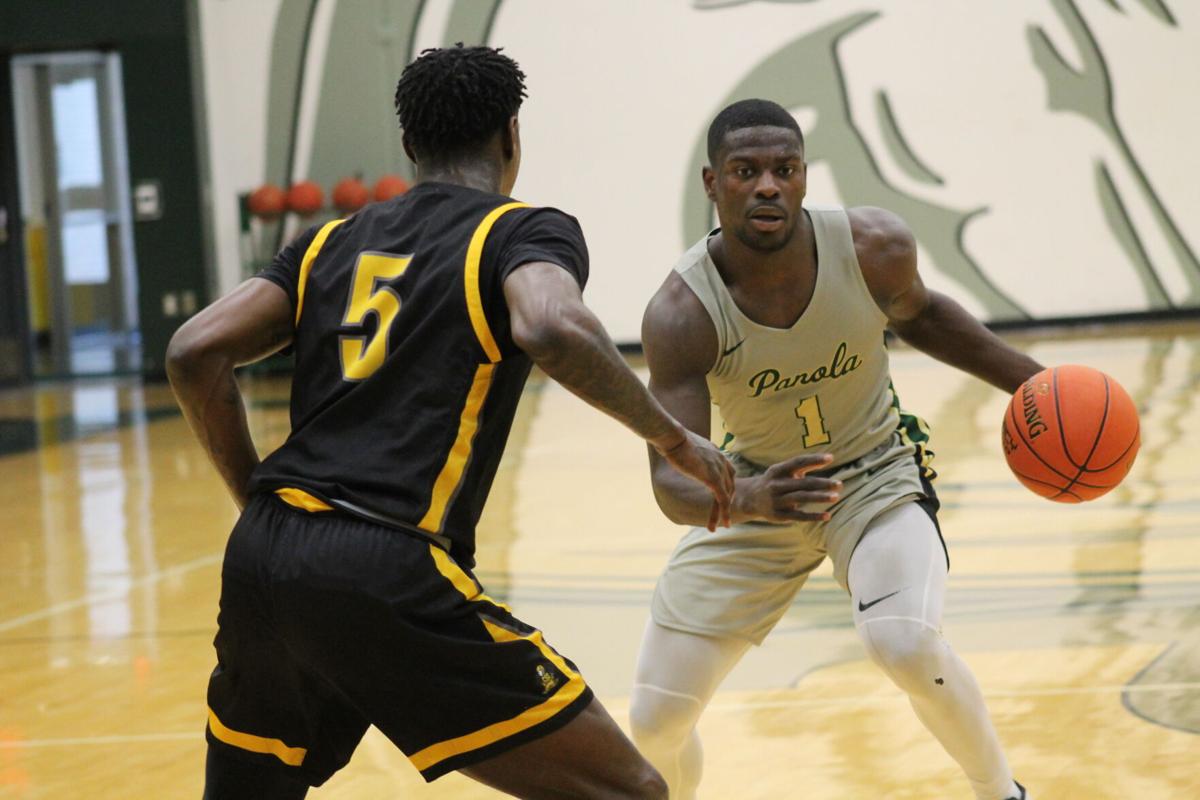 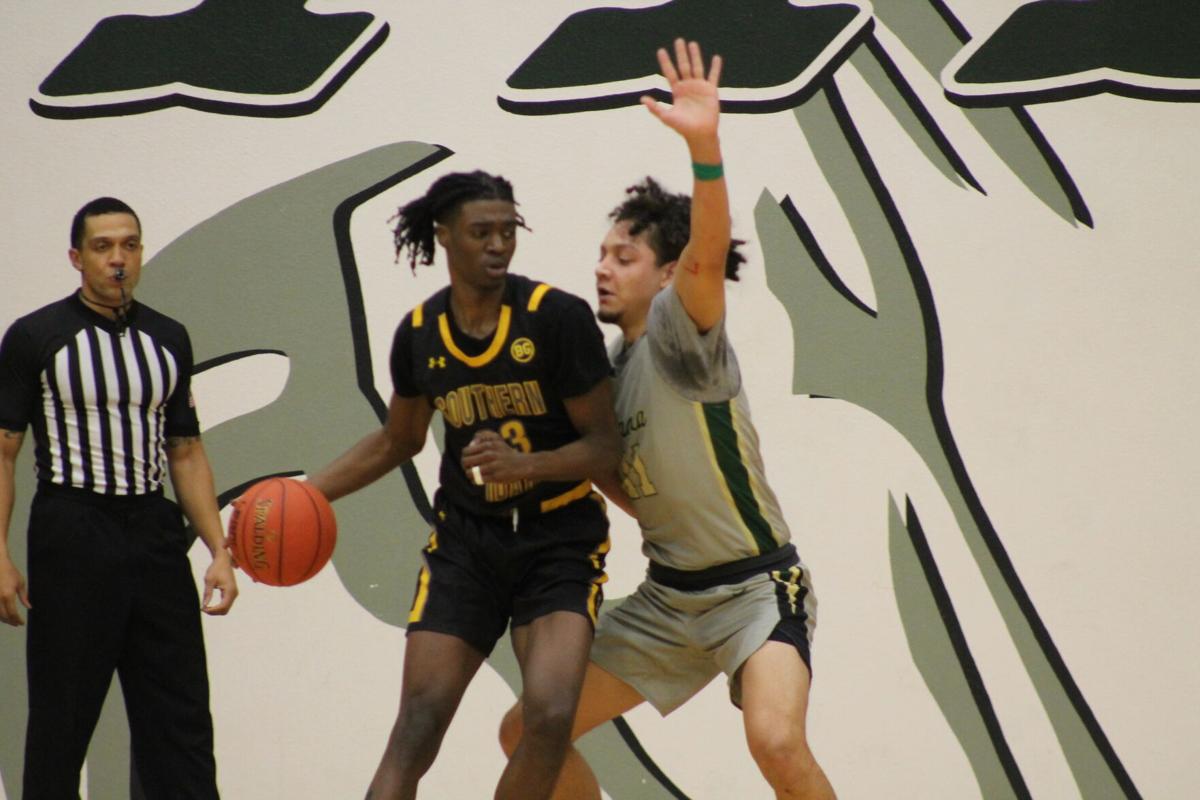 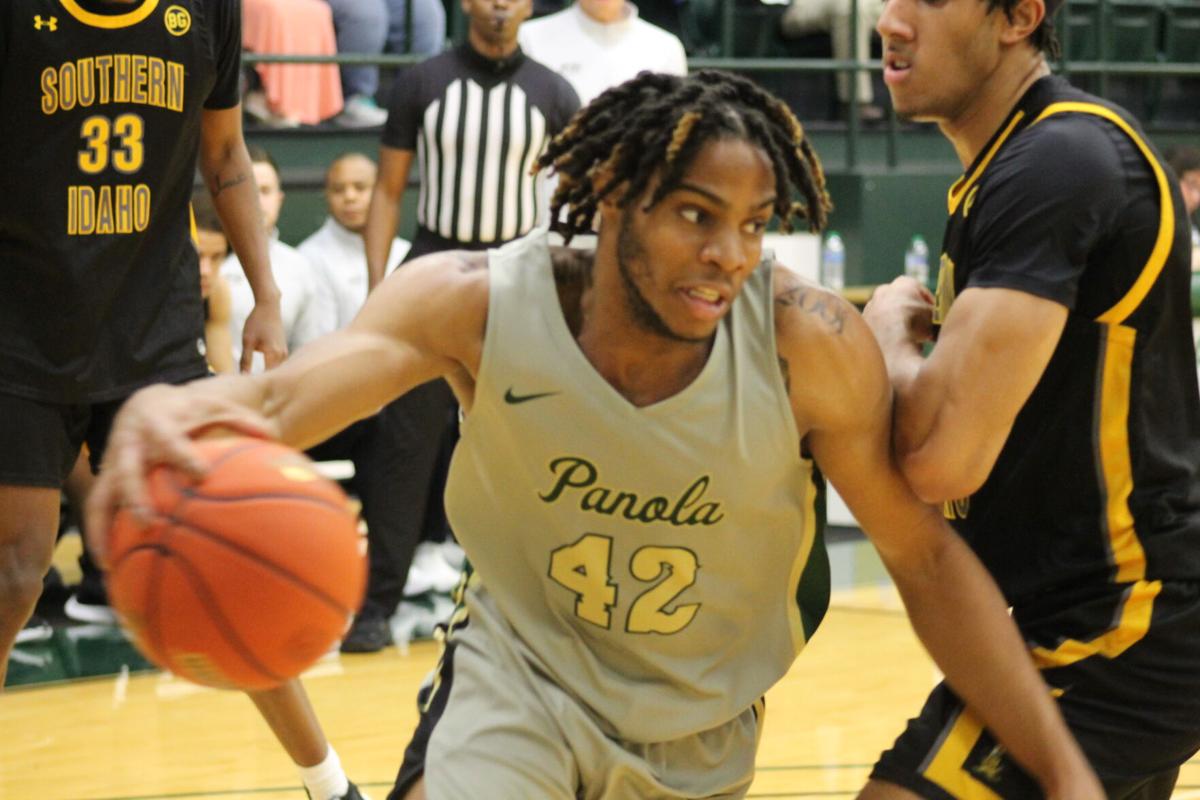 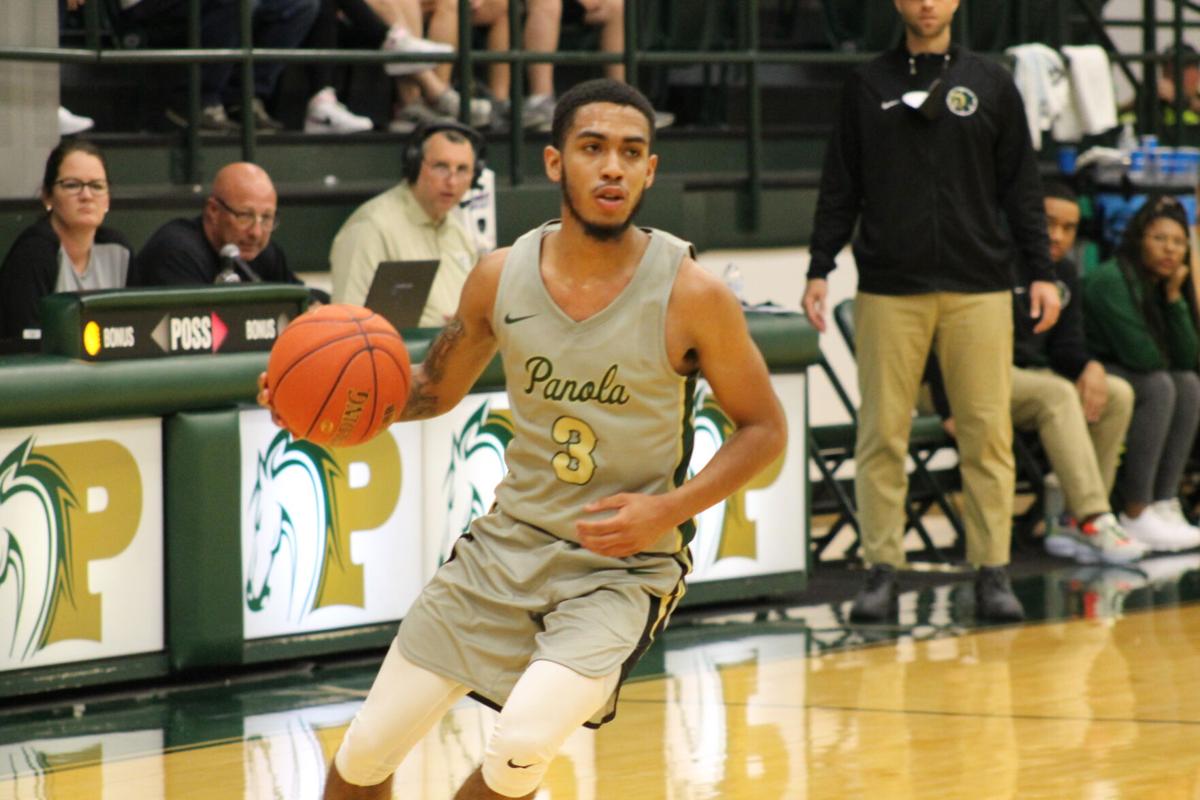 Panola's Jacobi Lewis brings the ball up the court in Thursday's non-conference basketball game against No. 10-ranked Southern Idaho. 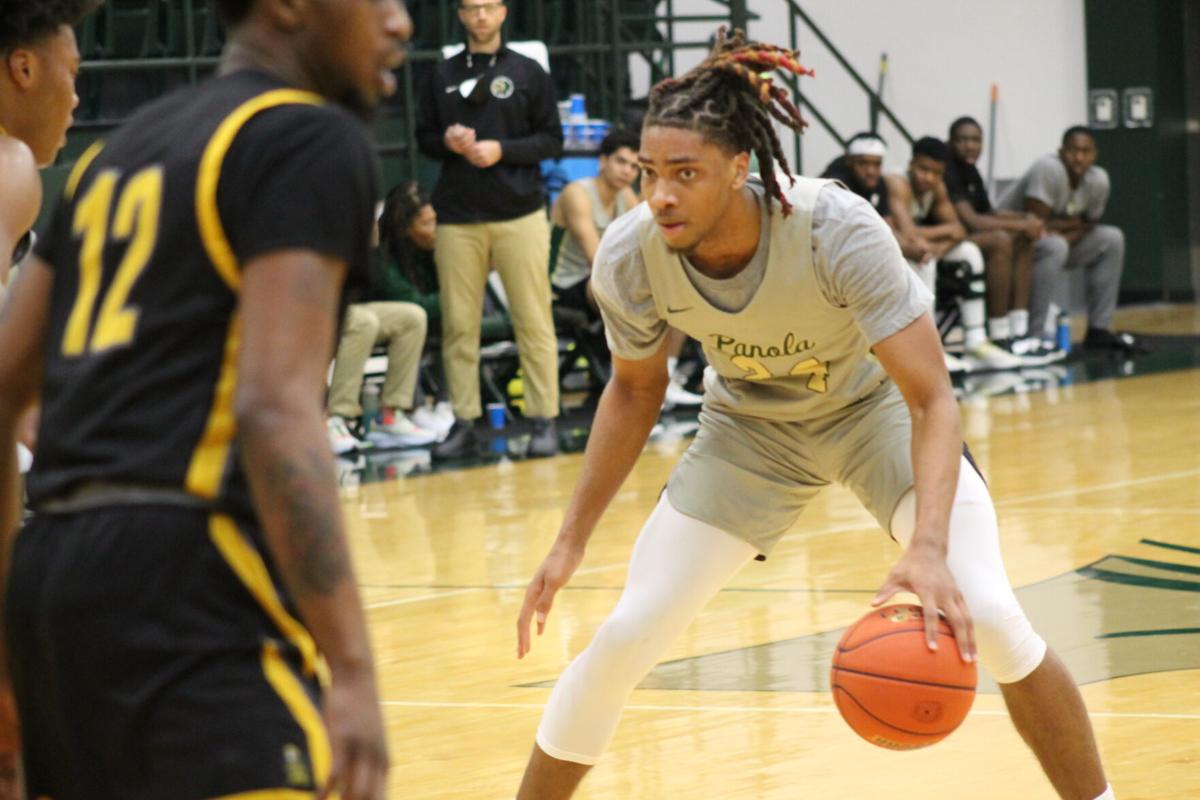 Panola's Jacobi Lewis brings the ball up the court in Thursday's non-conference basketball game against No. 10-ranked Southern Idaho.

CARTHAGE — Coach Aaron Smith and the Panola College men’s basketball team knew what they were facing when College of Southern Idaho — the No. 10-ranked team in the country — walked into the gym.

The Ponies gave the Golden Eagles all they could handle, but unfortunately Troy Hupstead’s 3-pointer at the buzzer rimmed out and Southern Idaho was able to survive the upset with a 75-72 victory on Thursday afternoon.

Hupstead, who put up game highs in points with 23 and rebounds with 14, battled Robert Whaley and his 6-foot-5 280-pound frame down low and outplayed the forward who looked like a younger version of Zion Williamson.

“The amount of energy he had to expend was crazy,” Smith said of Hupstead. “He was having to battle on both ends. As crazy as it is, he got the better of that match-up but they were both killing each other. He played with passion and was great for us tonight.”

Southern Idaho is a on a three-game Texas trip over the Christmas/New Year’s break taking on Panola, Tyler and Paris on back-to-back-to-back days.

“Coming back from the two week break, it was a good testament to see where we are as a team,” Hupstead said. “They are a very good team and it was good to see us test our skill set to see where we’re at. Not just in our league but across the country as well.”

Jakari Livingston and Marcellious Lockett both scored 12 points, Chayce Polynice scored 10 with five boards, and Daylen Williams scored eight points with six rebounds and had a game-high five steals for Southern Idaho. Panola trailed the whole first half and by as many as 11 but cut Southern Idaho’s lead down to 39-32 going into halftime.

“Coach Smith keeps us composed and doesn’t make us feel like we aren’t in the game,” Amos III said. “We needed to keep fighting, and that’s what we did.”

Panola was able to get their first lead of the game on a Mfum 3 that made it 42-41 three minutes into the second half.

Southern Idaho would build their lead back up to double digits 58-48 with 12:04 left, but the Ponies kept chipping away at the lead. A Hupstead put back layup tied the ball game at 72-72 with under 40 seconds remaining in the game, but Lockett came up clutch.

The sophomore hit both of his free throws with 15.2 and stole Panola’s ensuing inbound pass on the other end. Lockett hit the first but missed the second free throw, giving the Ponies one last chance to the game and force overtime before Hupstead’s 3 rimmed out.

“The team that is more composed towards the end and executes better is the team that wins,” Hupstead said. “They ran their stuff and we fell a little short-handed.”

At the level of competition that Panola competes at, there were no moral victories for the Ponies after the game.

“I’m very disappointed in the loss but I’m proud of how they competed,” Smith said.

Panola (11-4) will get back into Region XIV Conference play on Monday when they visit Angelina. Tip-off is set for 7 p.m.