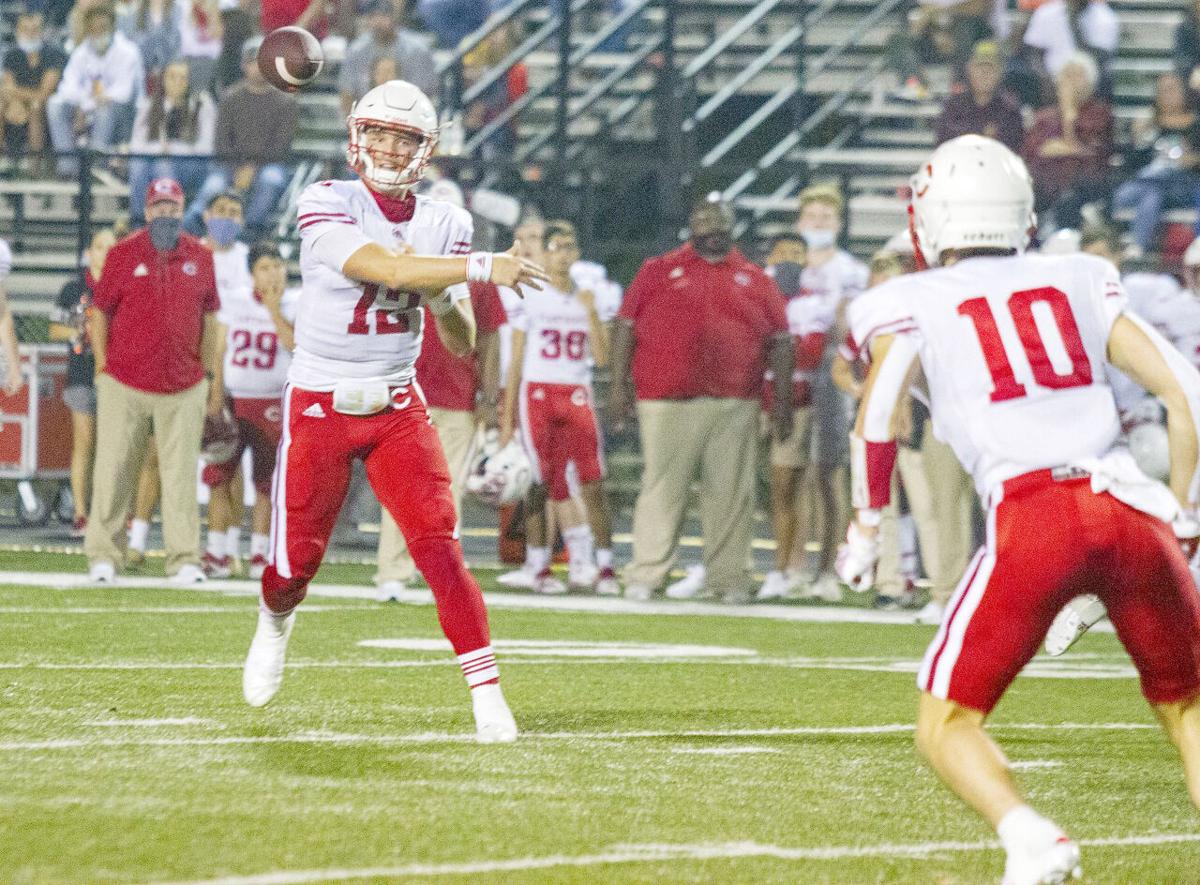 Carthage quarterback Kai Horton (12) throws a short pass to Craig McNew (10. McNew leads the team in receptions with 14 for 259 yards and a score. 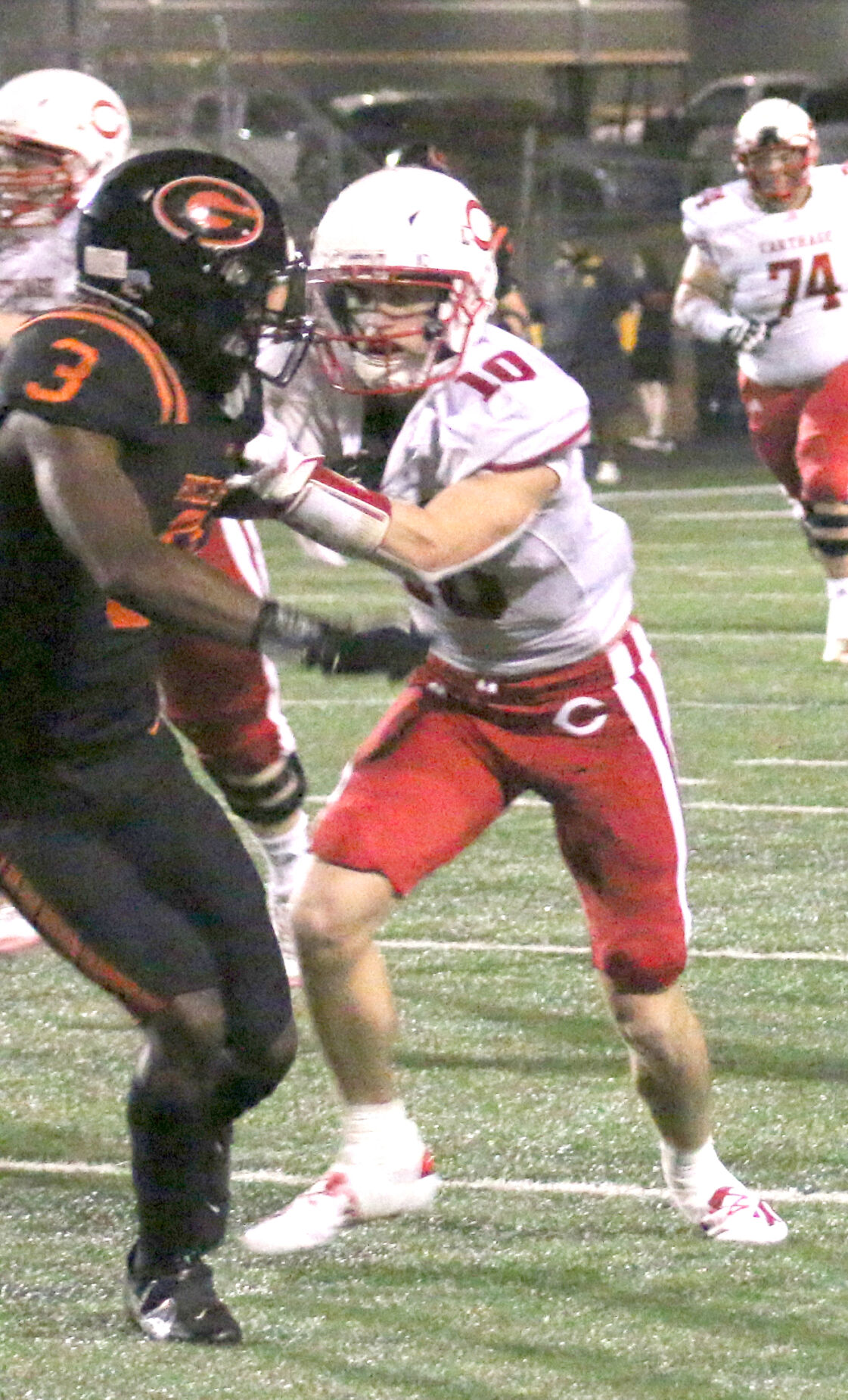 Carthage wide receiver Craig McNew makes a block downfield on Gilmer’s Davion Smith (3) in the Bulldogs’ 42-14 win over the Buckeyes. 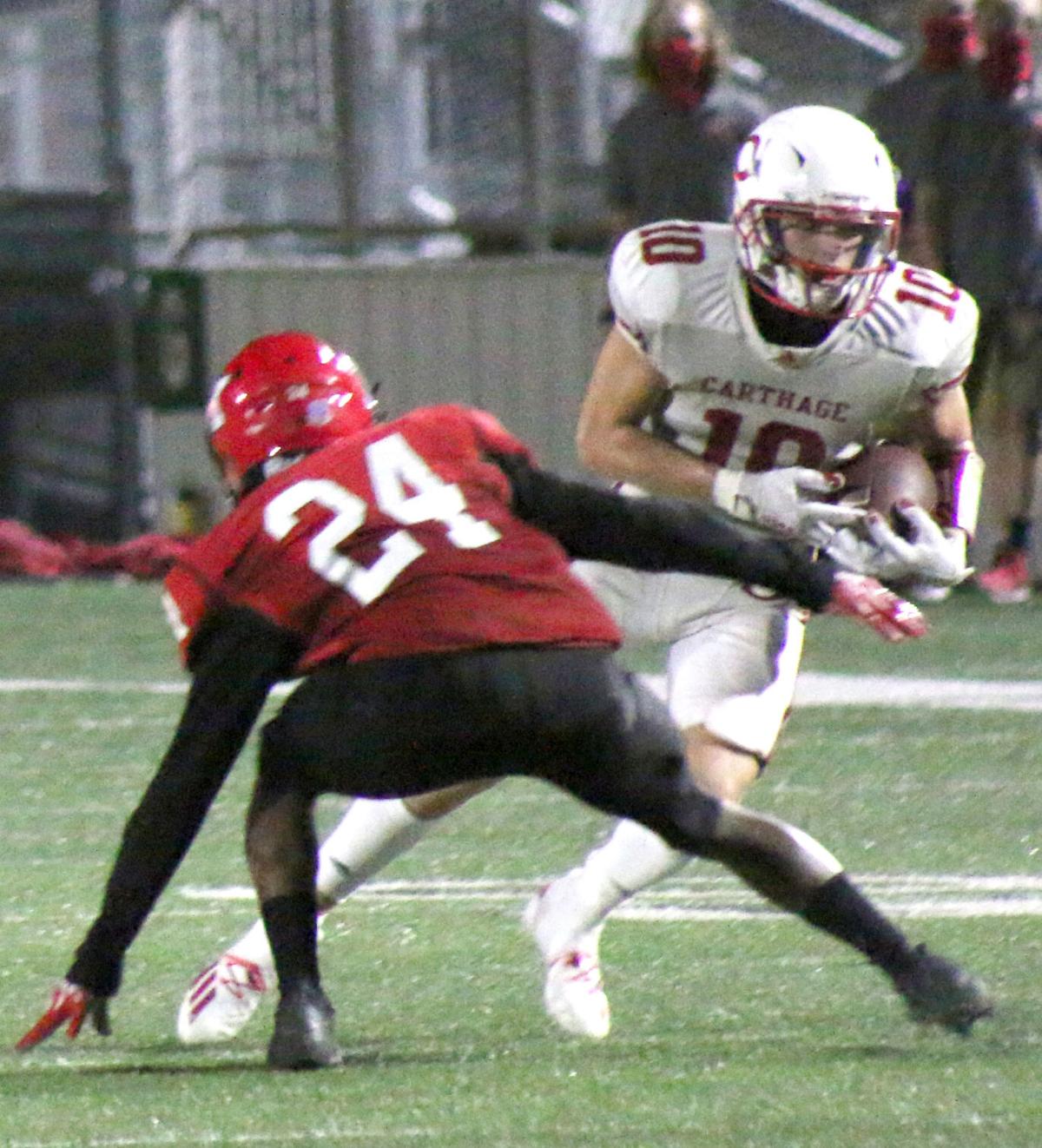 Carthage quarterback Kai Horton (12) throws a short pass to Craig McNew (10. McNew leads the team in receptions with 14 for 259 yards and a score.

Carthage wide receiver Craig McNew makes a block downfield on Gilmer’s Davion Smith (3) in the Bulldogs’ 42-14 win over the Buckeyes.

It wasn’t really much of a surprise that Craig McNew was the leading receiver for the Carthage Bulldogs through their first four games.

After all, he made quite a few big catches for the team last season and the top two receivers graduated on to play college football.

The surprise was that it wasn’t until the fourth game of the season that the senior finally caught his first touchdown pass.

“I was really starting to wonder,” McNew said. “I dropped two that would have been touchdowns. I finally got one last week.”

McNew frequently found himself wide-open last year, but then opponents had to worry about Kelvontay Dixon and Kel Williams too.

“Last year, they mostly keyed on Kelvontay,” he said. “That left me with a mismatch having a linebacker on me. Or Coach Surratt would call a play that put all the attention on him (Dixon), and I’d sneak out and be open.”

There have been a few drops for the normally sure-handed receiver this year.

But he still seems to be the go-to guy for quarterback Kai Horton when the Dawgs need a big play or a key first down.

“I feel that both of us being seniors and having played together a lot, we’re both on the same page,” the 5-11, 160-pounder said. “Sometimes if nobody is getting open, I’ll just sit in the open and he always seems to find me.

“If it’s a big third down, I feel like I never drop it — although I have a couple times this year. Normally, I’m pretty consistent.”

Horton did find McNew for a 41-yard touchdown against Center, one of the four touchdown passes he threw on the night.

McNew put some distance between him and the player covering him, and once he caught the ball it was just a race to the end zone.

“I just ran my rout with speed and then I stuck it,” he explained. “They were in man-to-man and I just outran the guy.”

McNew takes pride in his rout running and credits the Bulldogs’ head coach.

“Coach (Scott) Surratt is good at teaching routs,” McNew said. “He teaches us how to use our quickness to get open. And we also watch a lot of film to see how the corners play.”

Although his first TD didn’t come until the fourth game, McNew has been involved in quite a few Carthage scoring plays this season.

That’s because he’s the holder for extra points and field goals.

The Bulldogs haven’t kicked a field goal yet, but with six TDs against Gilmer, five against Pleasant Grove and eight against Center, the kickers are getting quite a workout.

“Most people don’t realize how important that is,” he said. “It could cause you to win or lose a ballgame. We haven’t really had any important kicks so far this season, but we have to be ready for it.

“Putting it on the tee is the easy part. I just catch it and put it on the tee. The hardest part is snapping and kicking. Some of our kickers are quicker than others and I have time to spin the ball so they’re not kicking the laces.”

College is definitely in the future for McNew, but he’s not really sure about football.

“If I get any offers, I’ll go see the places,” he said. “If there’s not much interest, I’ll probably just go to Arkansas. I have a lot of family that’s gone there. Both of my siblings (Vince and Marcy) went to Arkansas.”

McNew has played one other position for the Bulldogs this season and it wasn’t one he was prepared for — quarterback.

After a late interception against Pleasant Grove, the Carthage offense had to go out on the field for one more snap. McNew got the call.

He admits to being a little nervous having to take the snap in Carthage’s Victory Formation.

“J-Rock (backup quarterback Javarian Roquemore) wasn’t there, so they put me in at quarterback. It was just for one play.”