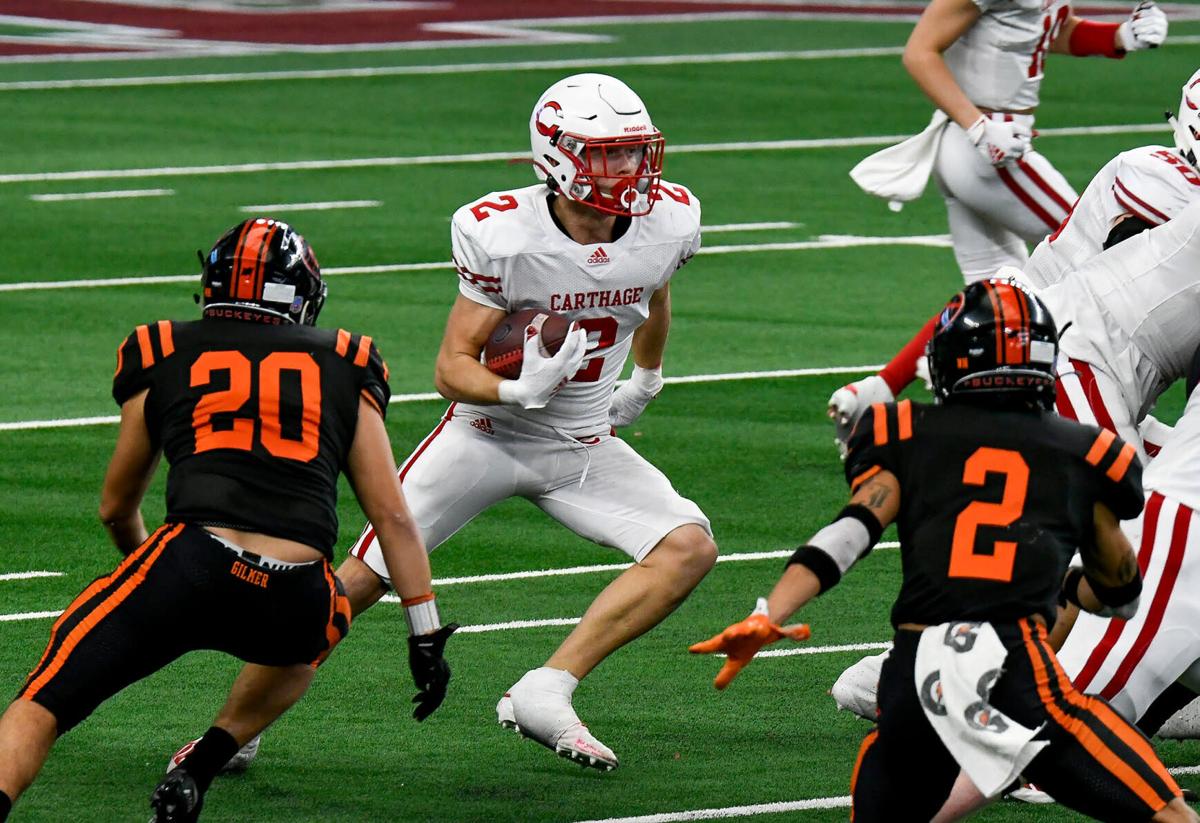 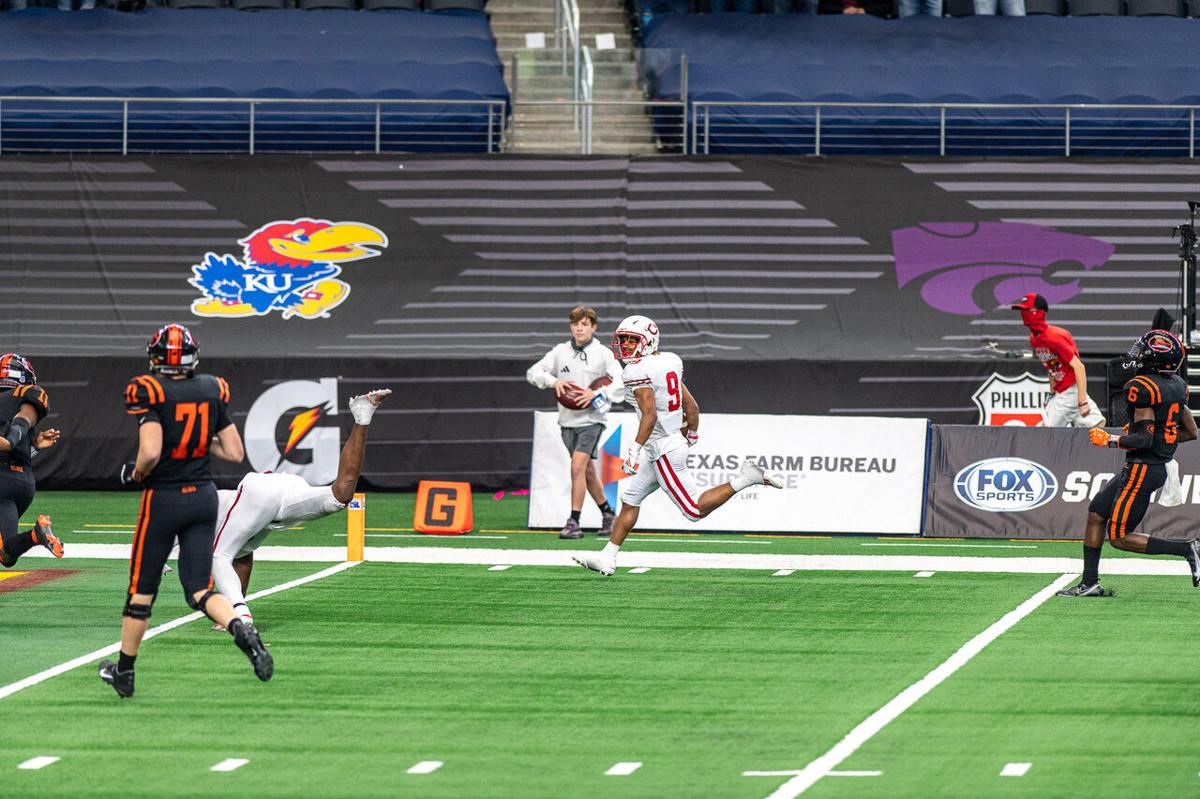 Carthage’s Brandon King (9) makes his way into the end zone with one of his four interceptions he had Friday against Gilmer in the Class 4A State Championship Game. King was picked as the Defensive Most Valuable Player with a pair of touchdowns in the 70-14 Carthage win.

Carthage’s Brandon King (9) makes his way into the end zone with one of his four interceptions he had Friday against Gilmer in the Class 4A State Championship Game. King was picked as the Defensive Most Valuable Player with a pair of touchdowns in the 70-14 Carthage win.

ARLINGTON — Mason Courtney saves his best for the biggest games and Brandon King had a few extra gifts on his birthday.

Both MVPs of the Class 4A, Division II state championship game shared their big nights with everyone around them in Carthage’s 70-14 win over Gilmer on Friday at AT&T Stadium in Arlington.

Courtney turned in a 244-yard, three-touchdown night on 16 carries and added a pair of catches for 46 yards as the Bulldog offense put up 70 unanswered points to cap an undefeated season with the eighth state title in the last 13 seasons.

He credited everyone around him.

“This thing right here,” Courtney said, holding up the MVP trophy in the postgame press conference. “This is for everyone, including (Carthage quarterback) Kai (Horton).”

Courtney praised his offensive line of Tee Kellum, Zackary Carlisle, Luke Jackson, Karston Williams and Kaed Staton, as well as tight end Montrell Smith, who paved the way for a 355-yard afternoon on the ground. The Bulldogs closed out a 13-game season with nearly 2,500 rushing yards.

“I have the best offensive line in the state and I wouldn’t want to do it with anyone else,” Courtney said. “Every single one of them had a huge role to play and they did it tonight.”

Friday capped a stellar career for Courtney, who followed his offensive line before breaking a tackle with a spin on a 23-yard touchdown run to put Carthage up, 56-14, late in the third quarter.

He was a candidate for the same honor in Carthage’s 2019 win with a 232-yard, three-touchdown night in the Bulldogs’ win over Waco La Vega.

In total, Courtney wraps his Carthage career with 4,188 rushing yards with 60 touchdowns and 868 receiving yards with eight scores.

“If I could explain Mason in one word: Tough,” Carthage Head Coach Scott Surratt said. “He’s going to bring it every game, every practice — you may tackle him one on one but he’s fixing to punish you.

“He waits until the state championships to have his best games and he had another good one tonight.”

The last thing Courtney praised was the Bulldog defense, a true iron sharpens iron aspect that Carthage used this season.

“You’d be surprised how hard we go at it in practice,” he said. “It’s like two different teams out there, it’s like they’re Gilmer or something, that’s how hard we go. They made us better.”

That unit included King, who hauled in four interceptions, including two that he returned for touchdowns, on his birthday.

The first led to a game-tying touchdown after the Buckeyes jumped to a 14-0 lead.

His second and third went to the house on returns of 15 and 35 yards, respectively. They were part of a 35-point avalanche in the second quarter for the Bulldogs. His fourth, which is the third-most put up by a team and ties Carthage in 2016, came in the fourth quarter.

“The first one was a tip drill and I just had the end zone right there,” King said. “On the second one, I just thought, ‘it’s another one.’ Kip Lewis got his hand on it and I snagged it.”

King is among several underclassmen on the Bulldog squad and he credited the seniors for the success this year.

“They pushed us hard as underclassmen, bullied us,” he said with a laugh.

Surratt chimed in: “He means they practiced hard.”

“They elevated us and we’ve got a lot coming back next year,” King said. “We’ve got to keep doing what we do.”

On Friday, that was grabbing two pick sixes and two more interceptions on your birthday while getting a ring.