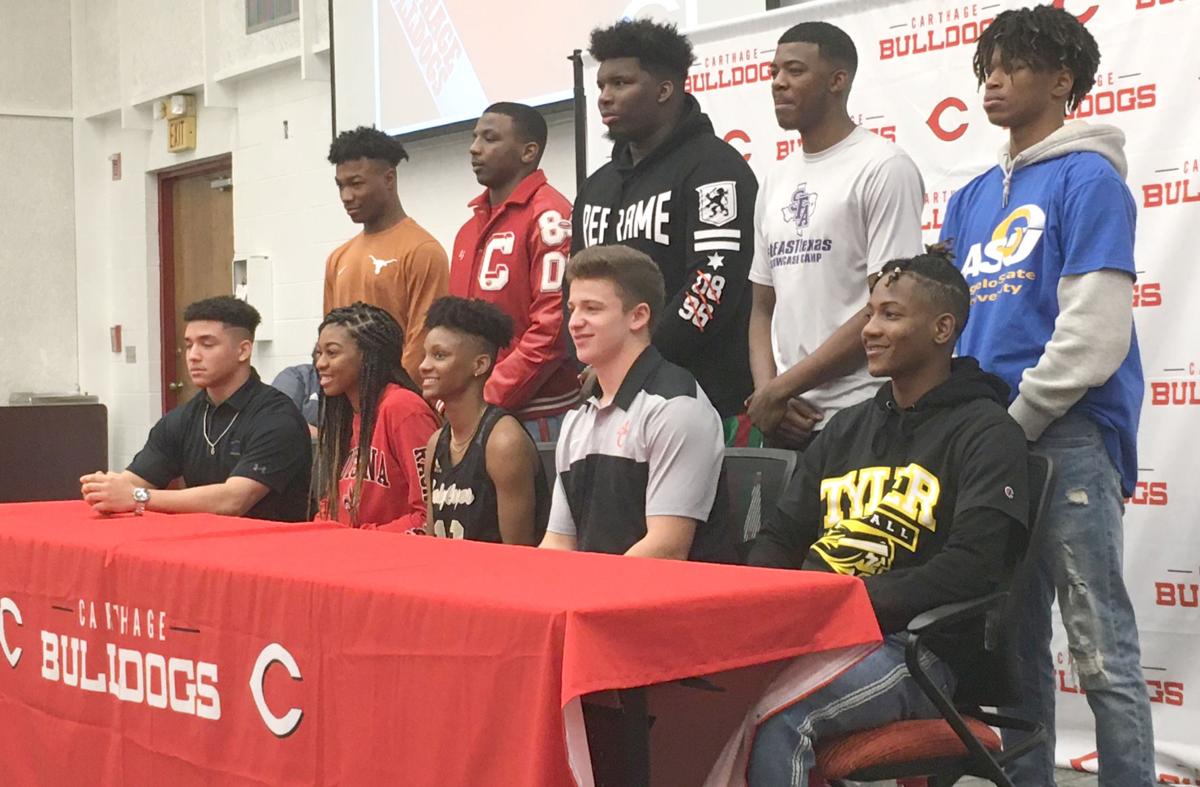 The members of th Carthage High School Class of 2020 who signed National Letters of Intent on Wednesday. 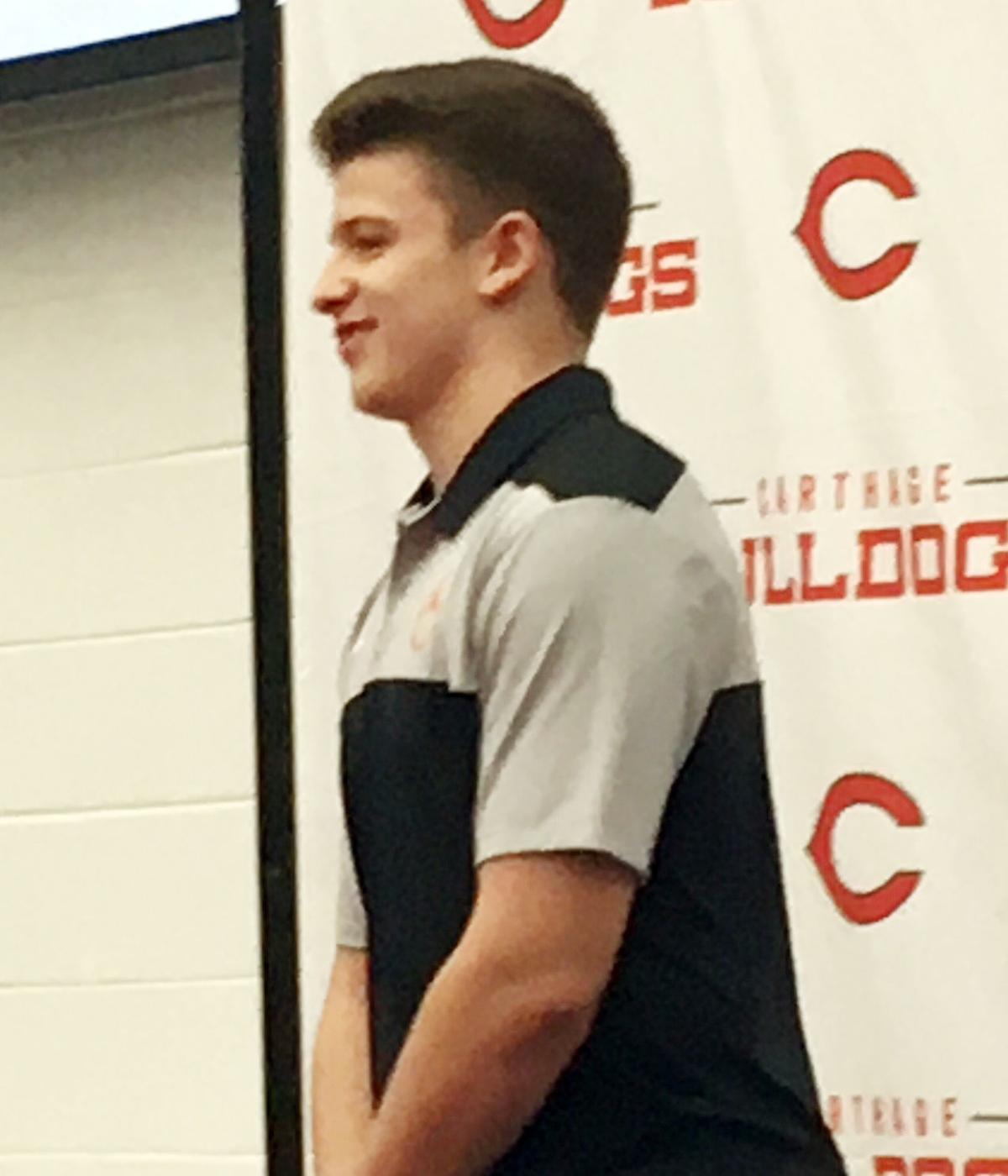 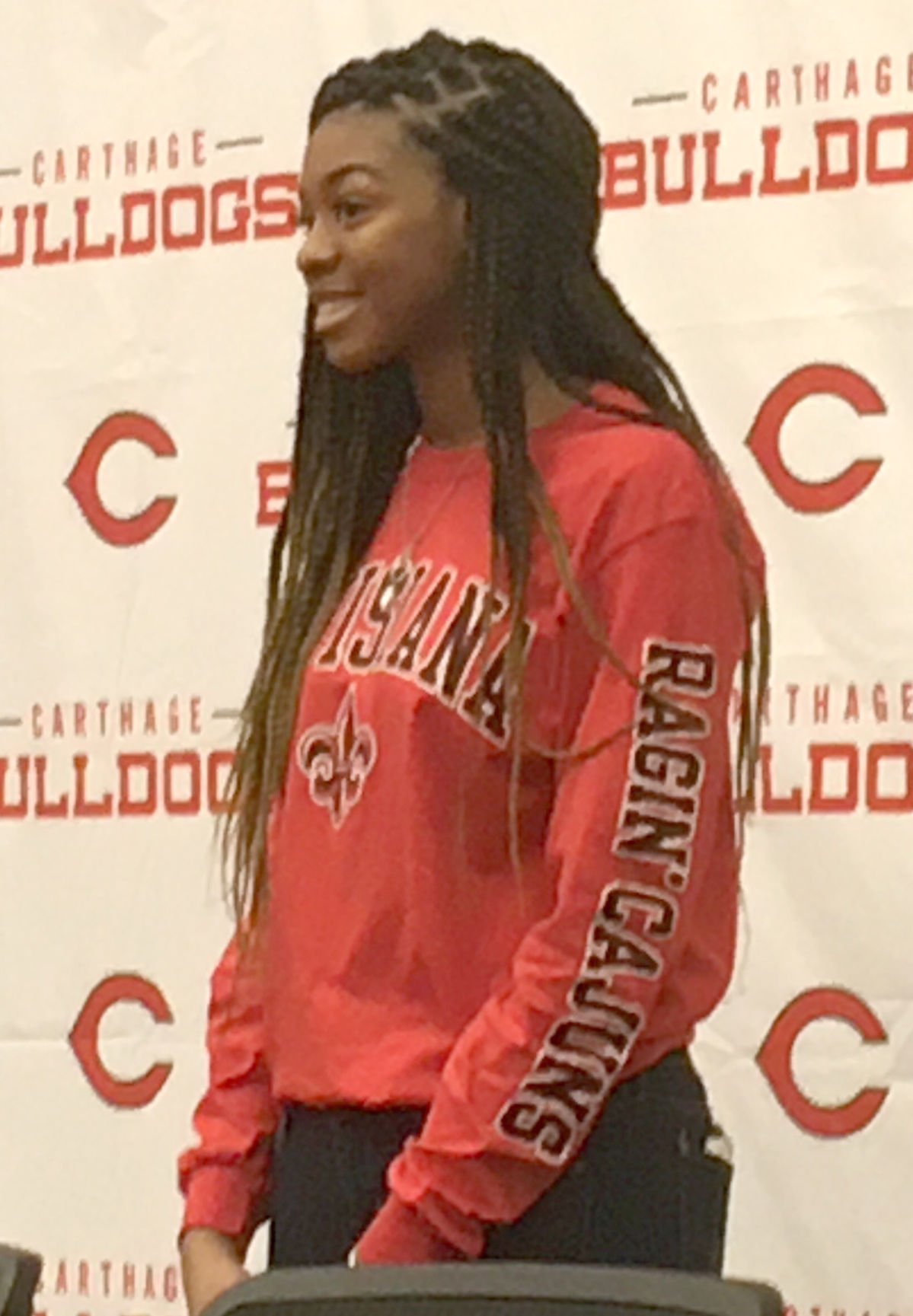 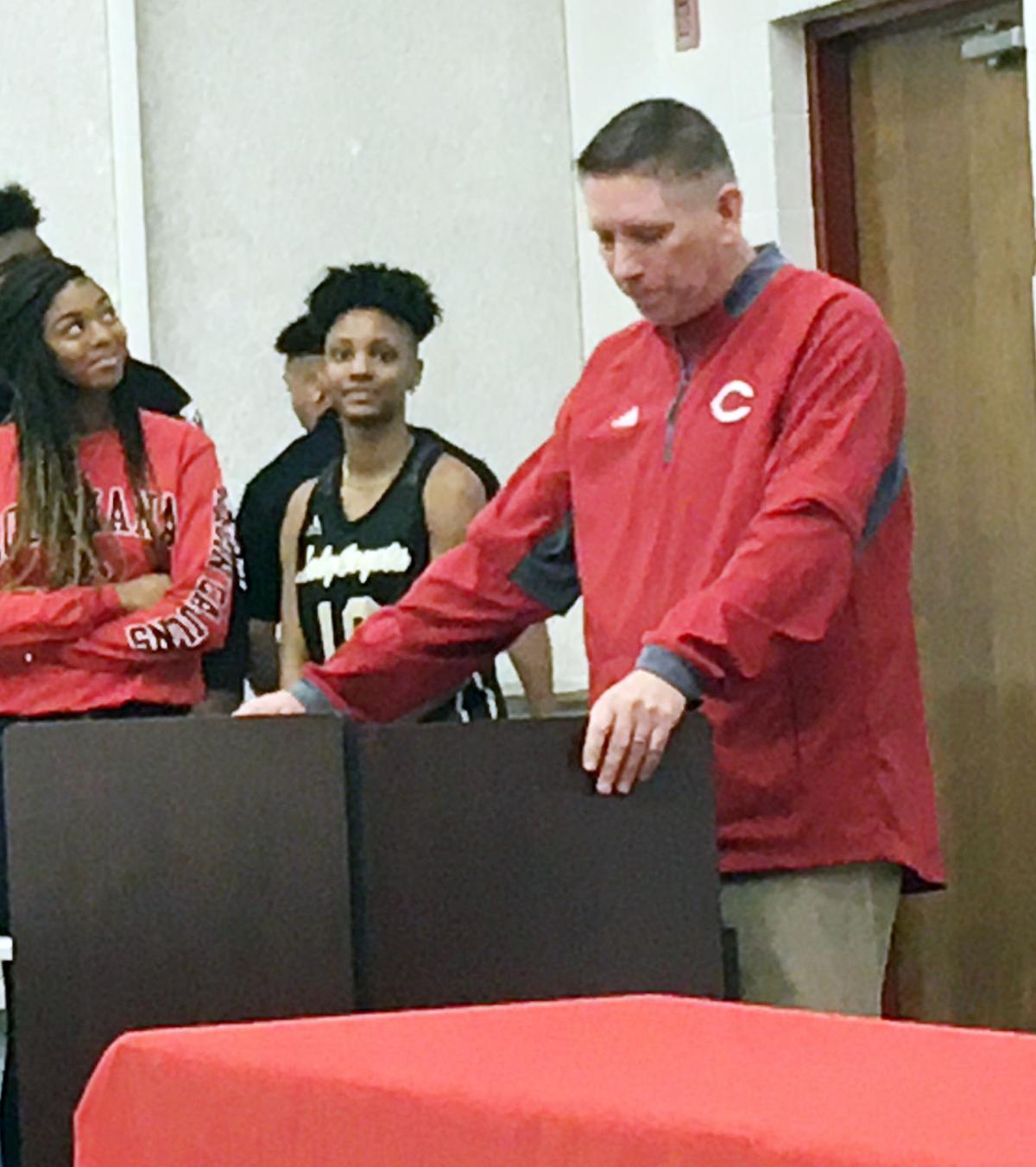 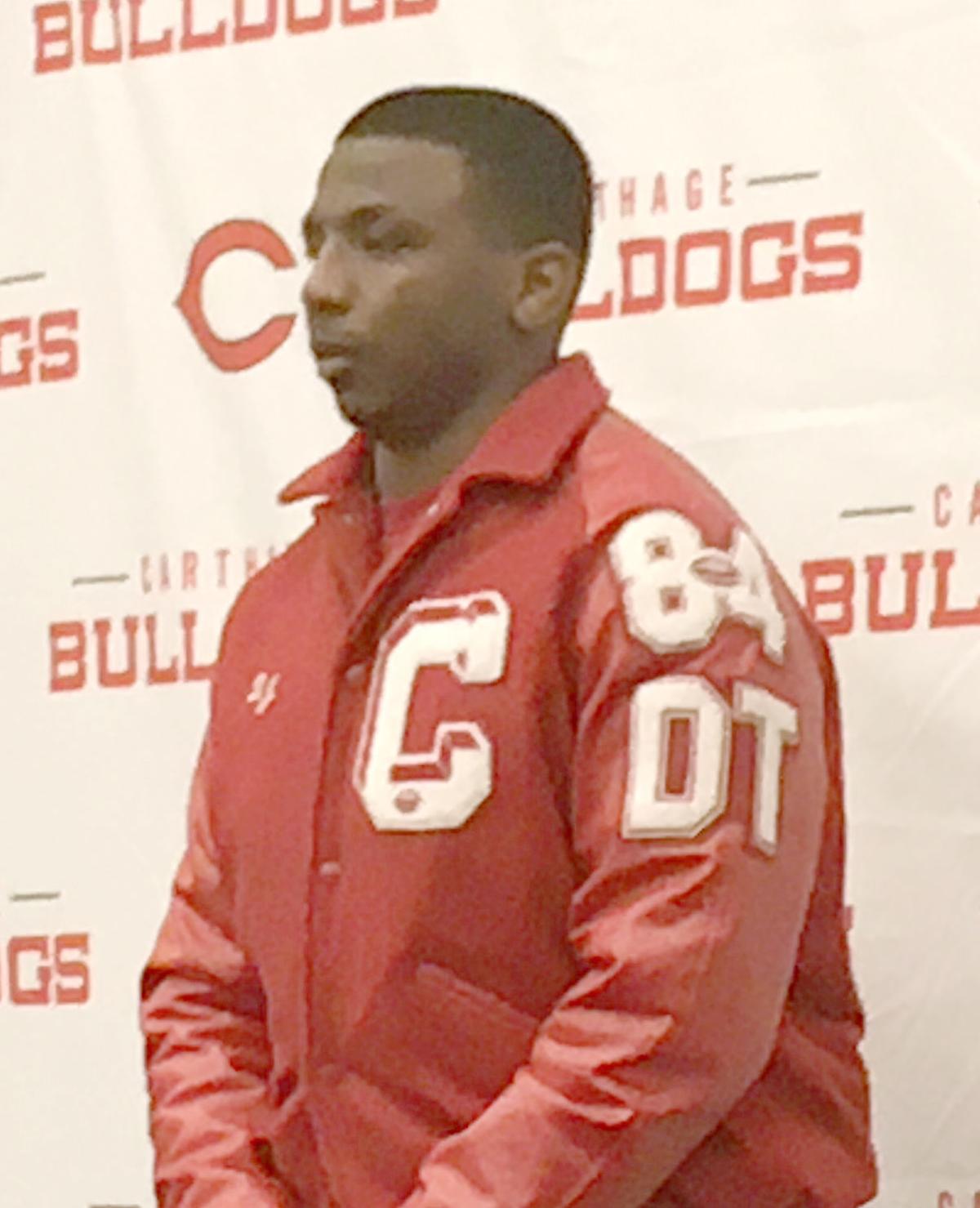 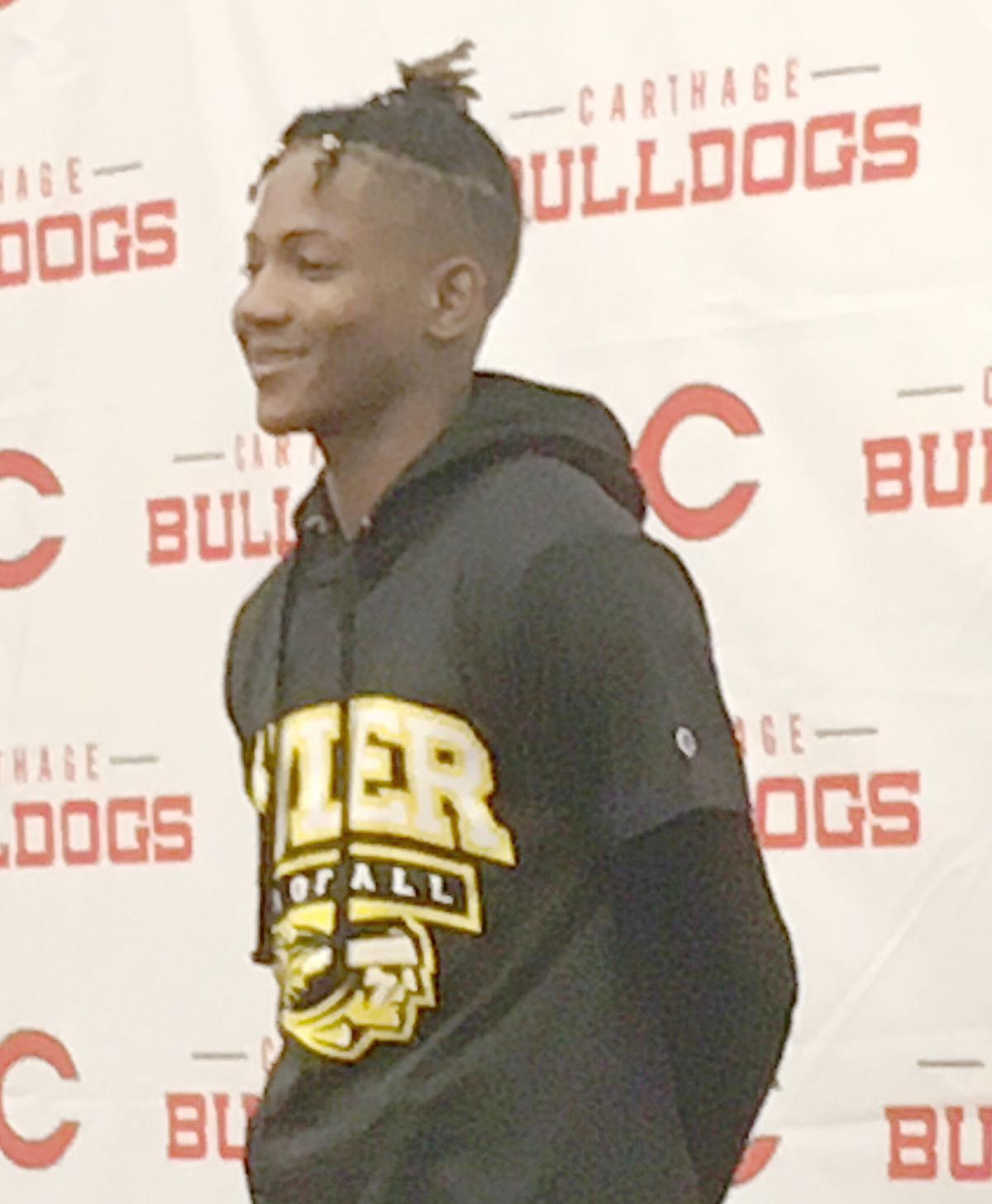 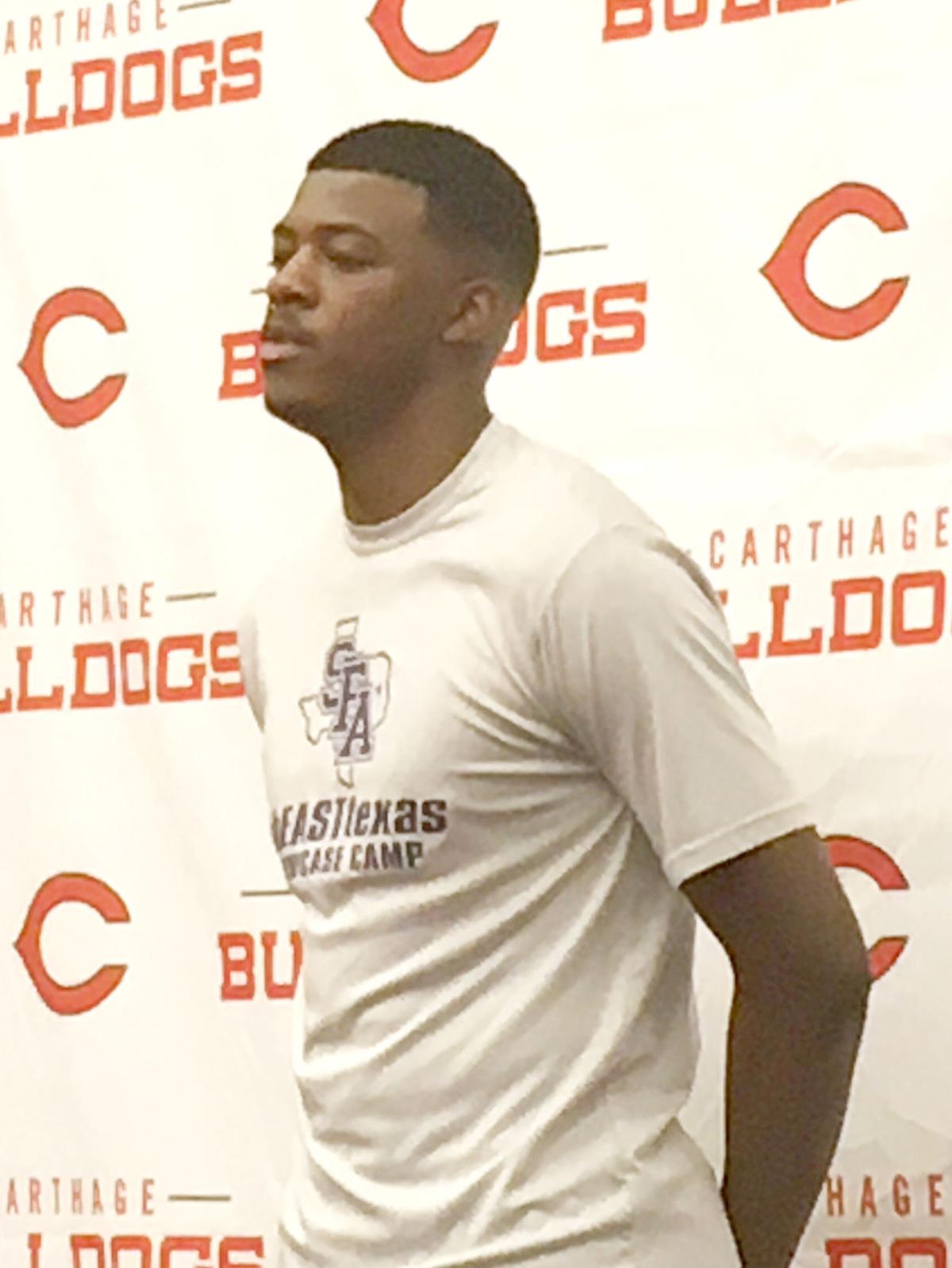 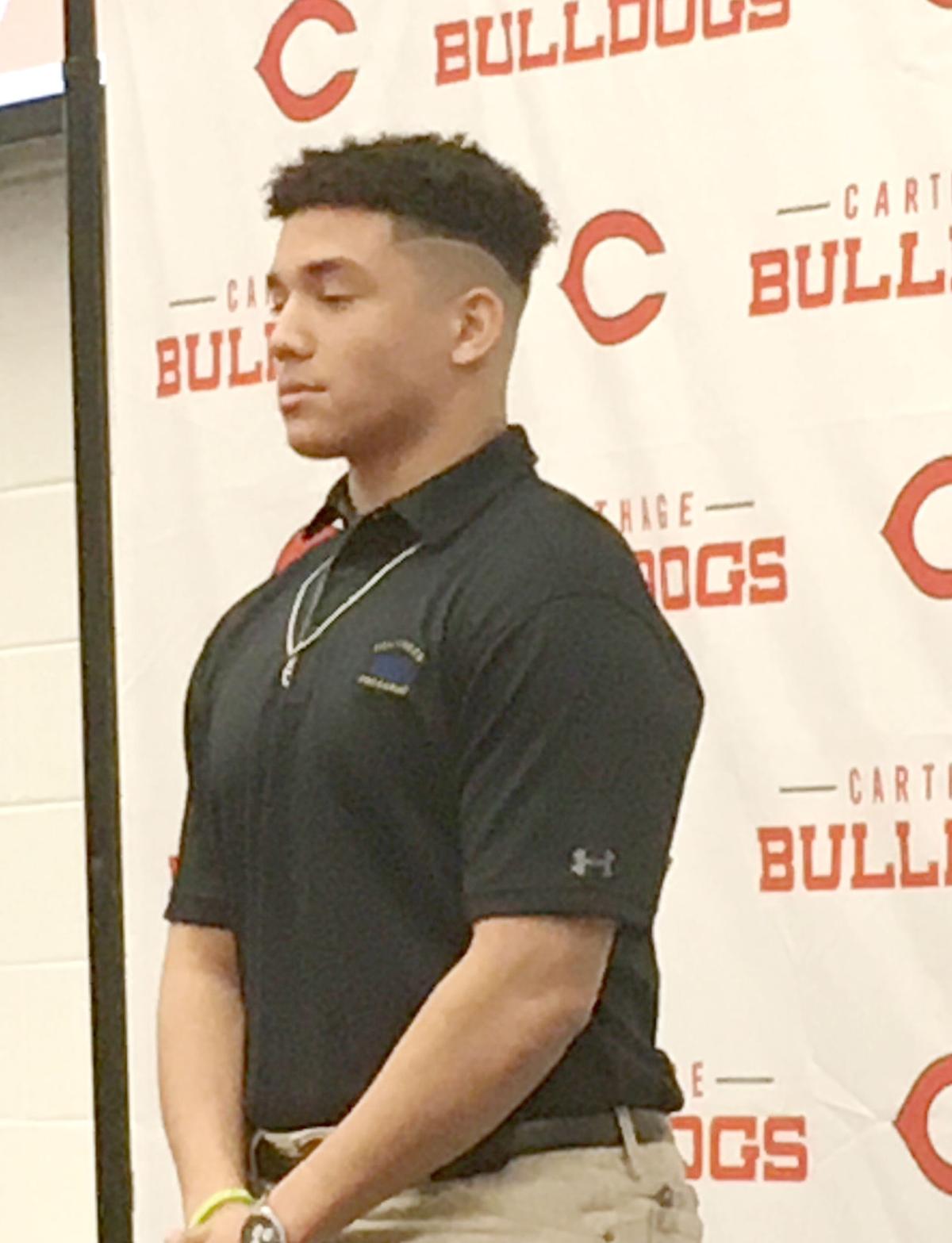 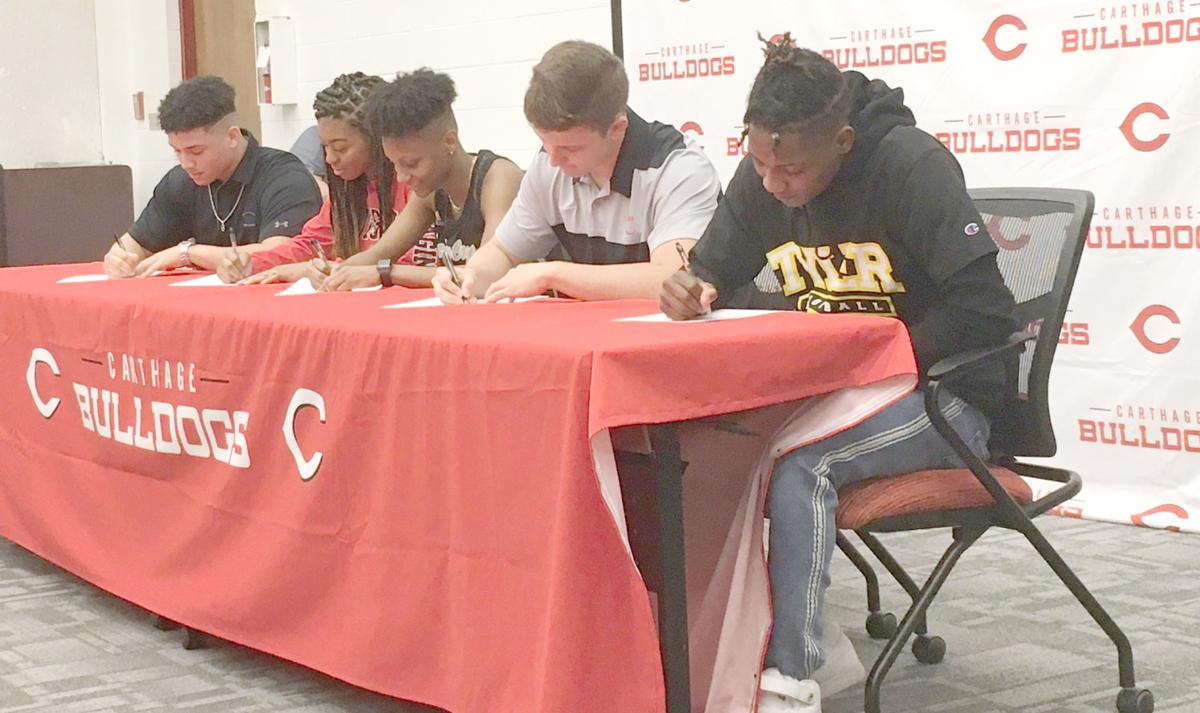 Five of the 10 Carthage High School athletis who signed National Letters of Intent on Wednesday. 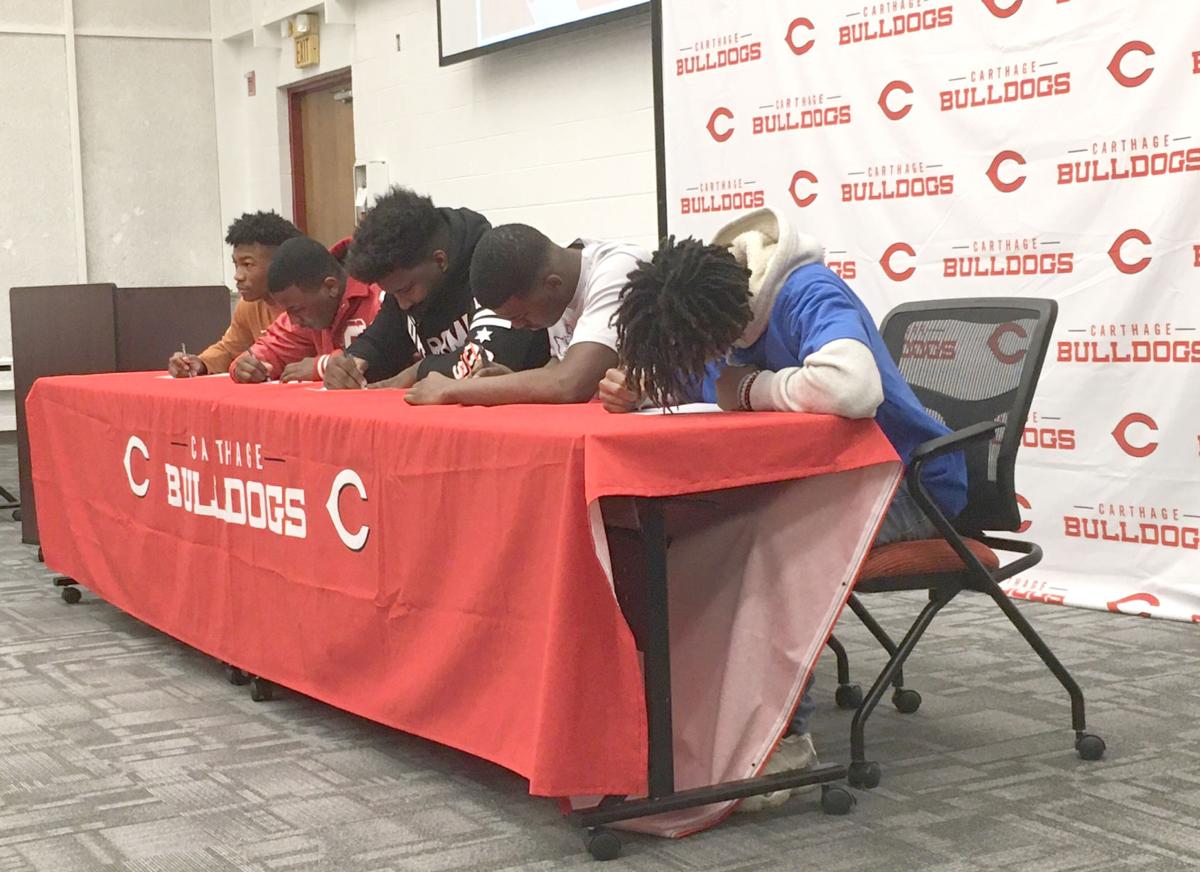 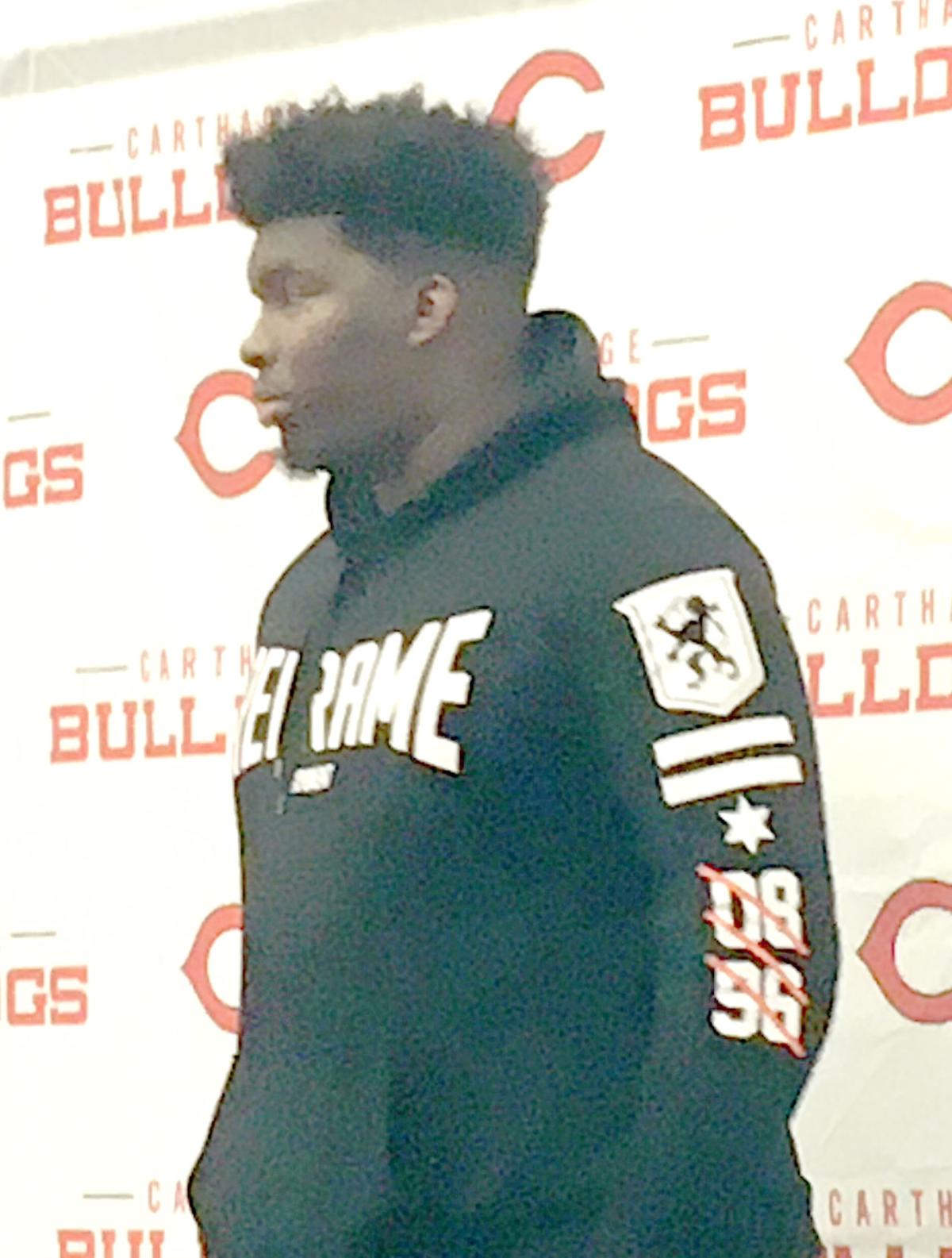 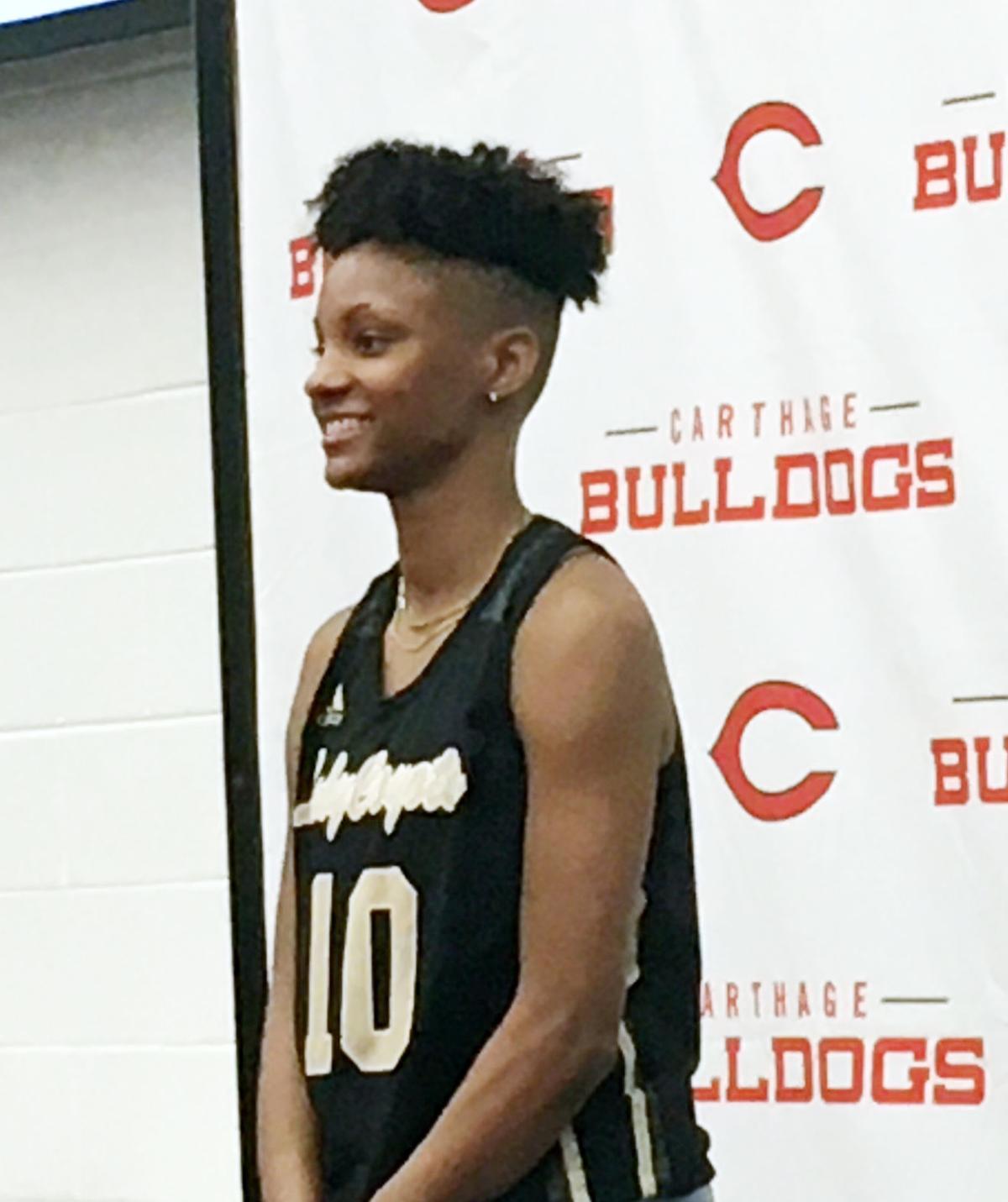 The members of th Carthage High School Class of 2020 who signed National Letters of Intent on Wednesday.

Five of the 10 Carthage High School athletis who signed National Letters of Intent on Wednesday.

Carthage High School showed off some of its best and brightest Wednesday morning in the old band hall.

The event was National Signing Day, and the purpose was to determine where the senior student/athletes will continue their athletic and academic careers once they graduate from Carthage High.

Ten signed National Letters of Intent on Wednesday, but several more will sign before the school year is complete.

The group of 10 is made up of two girls and eight boys, with seven of the eight boys playing football and the other signing to play baseball. The two girls signed to play volleyball and basketball.

For the girls, Cami Hicks signed to play volleyball at Louisiana-Lafayette, while basketball standout Zee McGrue signed with Weatherford College.

Although he was on the state championship football team, Brandon McNeely signed to play baseball at Angelina College.

“This is a great class,” said Scott Surratt in his role as the Carthage athletic director. “The two girls, Cami and Zee, may be the two best athletes in the class.

“We should have three, maybe four more, but this is pretty much our signing class. I’m excited for these 10 seniors here today. I’m very proud of them and it’s a special class. I think they’ll do great.”

Here is a look at Carthage’s 2020 signing class:

Cami Hicks, Volleyball, Louisiana-Lafayette: “She had already committed to Lamar, but they had a new coach so it opened up another opportunity for her to find the right fit,” said Volleyball Coach Dawn Stewart. “She was kind of under the radar because she didn’t play club volleyball and coaches told me they didn’t know that much about her.

“But she’s a hard worker and has worked on every aspect of her game to make it better. Coaches are pleased when they see not only what kind of a player she is, but what kind of a person she is. I’m real proud of her.”

Zee McGrue, Basketball, Weatherford College: “She’s worked hard this year and put out a lot of film,” Carthage Coach Michael Williamson said. “She’s leading the state in steals and assists. She really liked the coaches, she got a full-ride and their coaches have a 94 percent rate at placing people at the next level. That was big for her.”

Brandon McNeely, Baseball, Angelina State: “He’s got as good of a work ethic as anyone we’ve had since I’ve been here,” Carthage Coach John Goodwin said. “Hopefully, he’ll get even more command and continue to improve. He’ll fit in well in their program and that’s pretty special.”

Ty’Kiest Crawford, Football, Kilgore College: “Everything is out in front of him and it’s up to Ty as to how far he goes. ,” Carthage Coach Scott Surratt said of the 6-6, 335-pounder. “He’s a big kid with great strength and ability. I think if he takes care of his business and this opportunity, he can go anywhere in the country.”

Javon King, Football, Tyler Junior College: “TJC got a steal signing him,” Surratt said. “He’s a late bloomer. Getting in the weight room will help him. He likes to hit and he has great ball skills. I’m excited to see what he does down the road.”

Rayvon Ingram, Football Southern Arkansas: “Southern Arkansas is a great school and I think he’ll do well there,” Surratt said. “He’s been the quarterback of our defense the last two years from the Mike (middle) linebacker. We’ll definitely miss him.”

Kel Williams, Football, Angelo State: I think he has a chance to go there and play early,” said Surratt. “He’s a great route runner, has great hands and can make the tough catch.”

Quinton Owens, Football, Stephen F. Austin: “The sky’s the limit for him,” said Surratt said. “He’s kind of a hybrid. He has the size where he can get down and rush the passer or drop back like a linebacker in pass coverage. Not many players can do that.”

Desmund Hicks, Football, Arkansas-Monticello: “Hicks was one of our captains and was a good leader,” Surratt said. “He’ll do very well at the next level. He’ll get big in a hurry wen they get him in the weight room. He’s got great instinct and I think he’ll play early.”