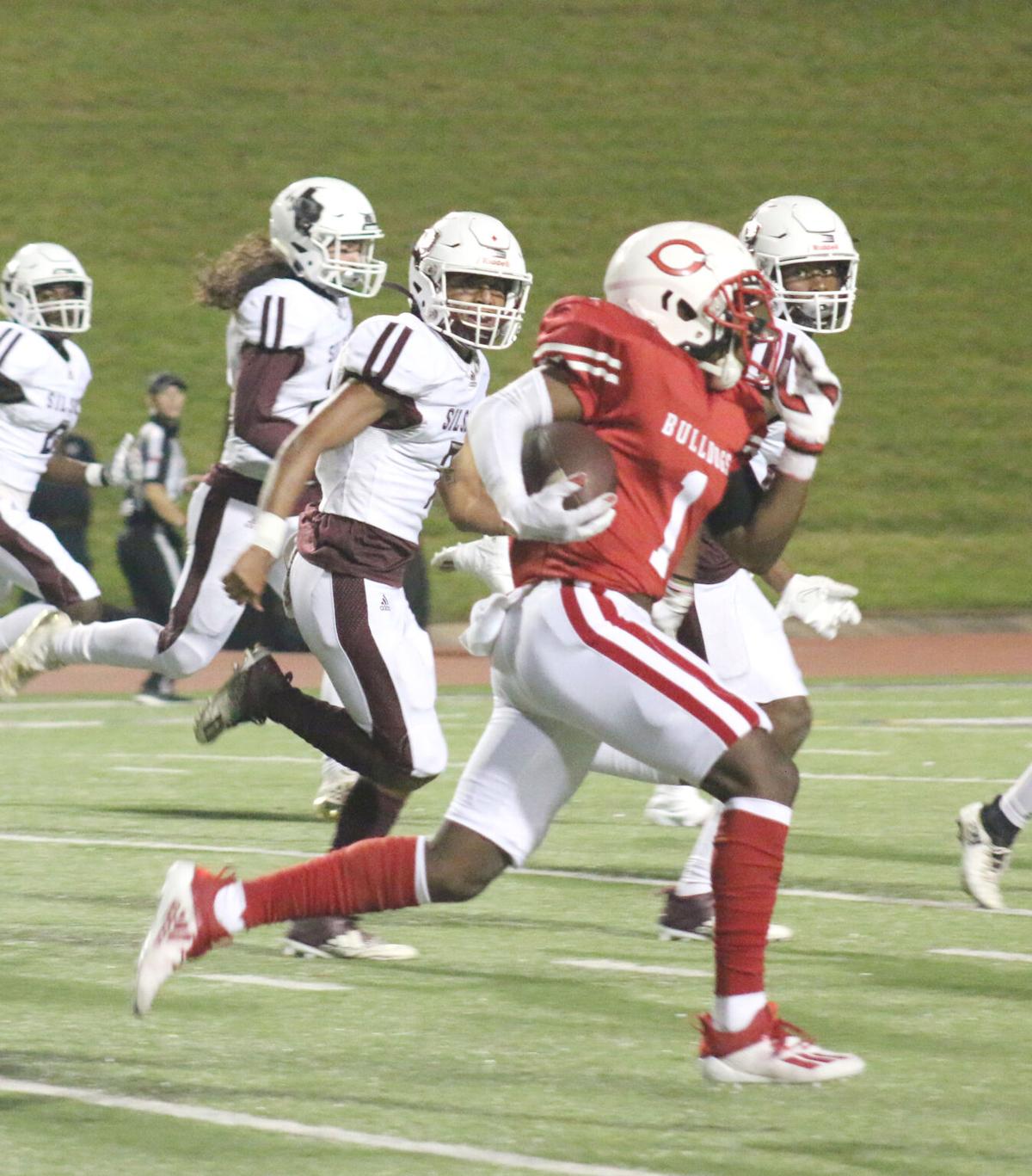 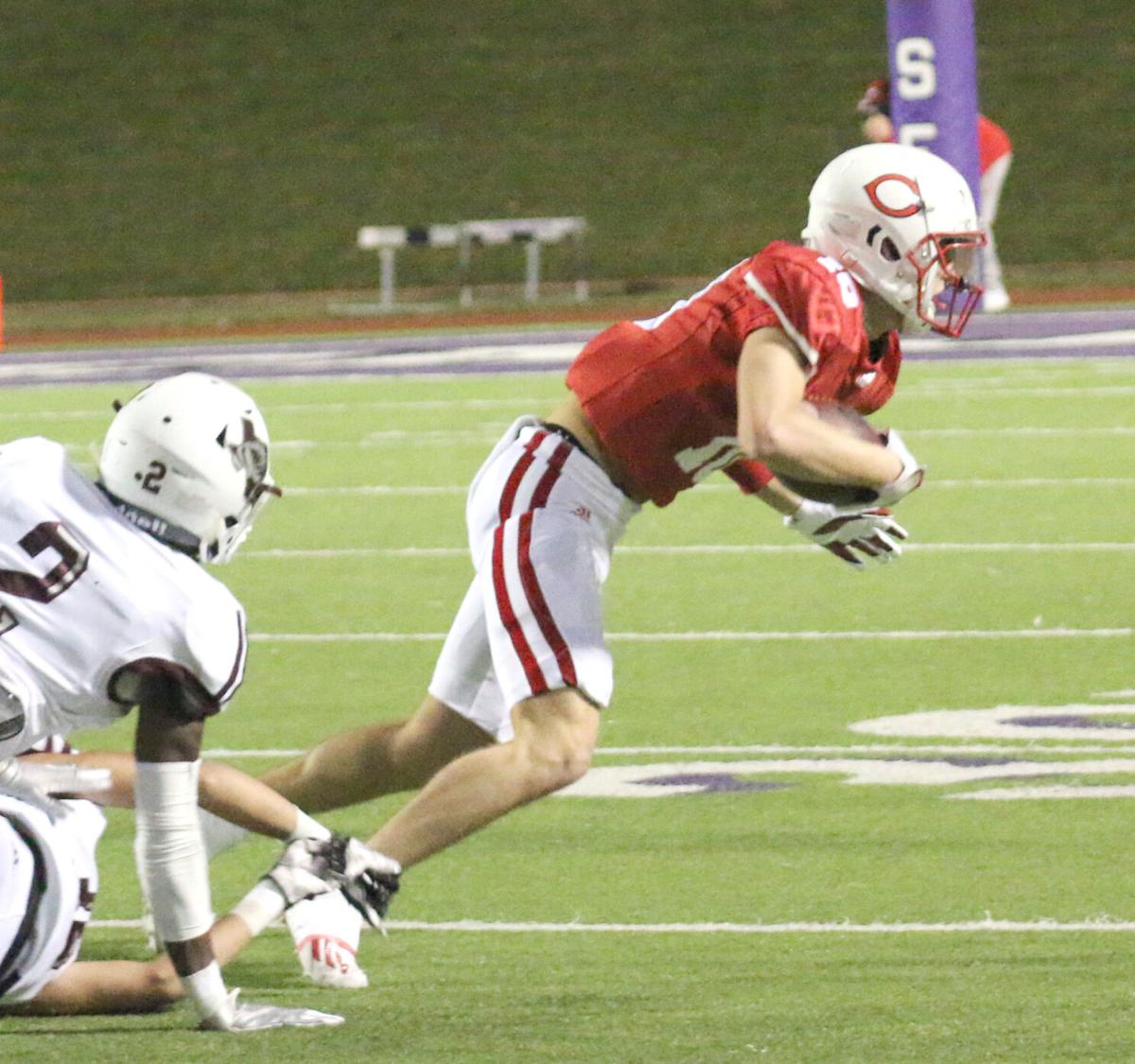 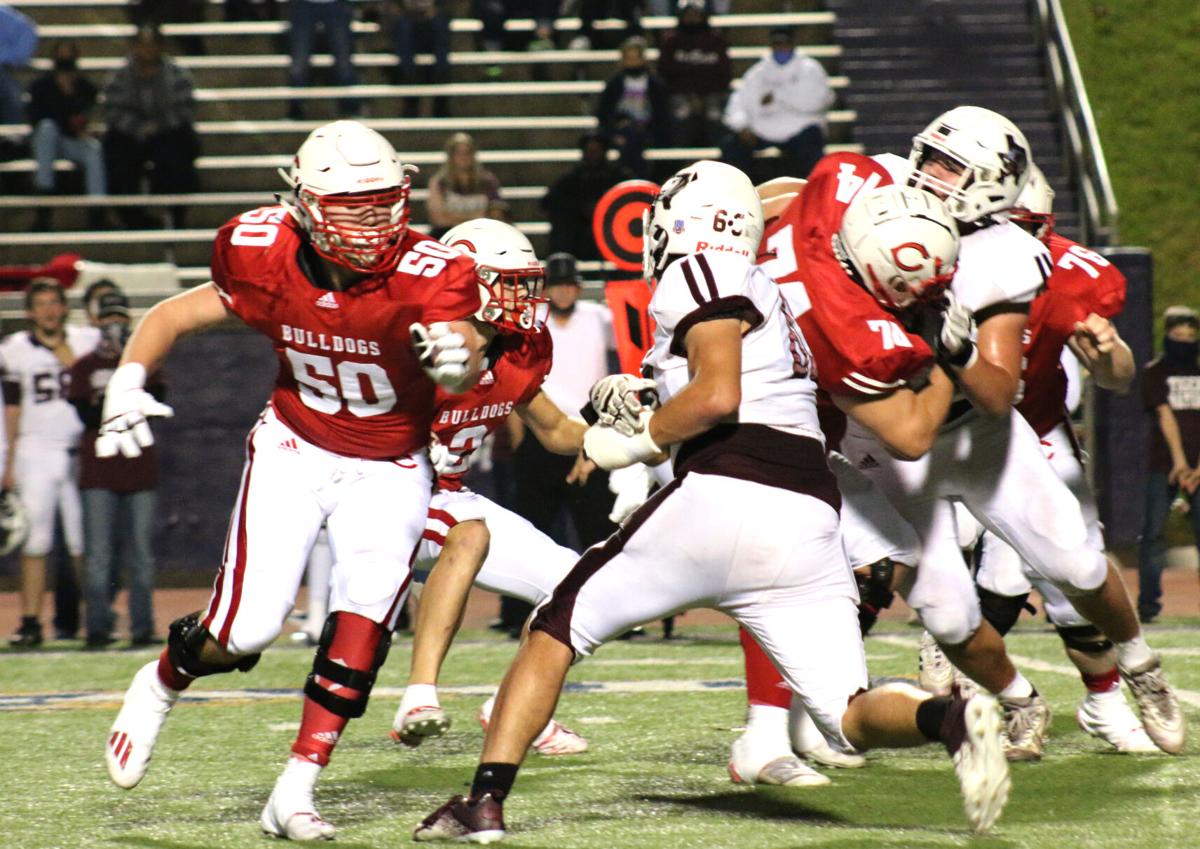 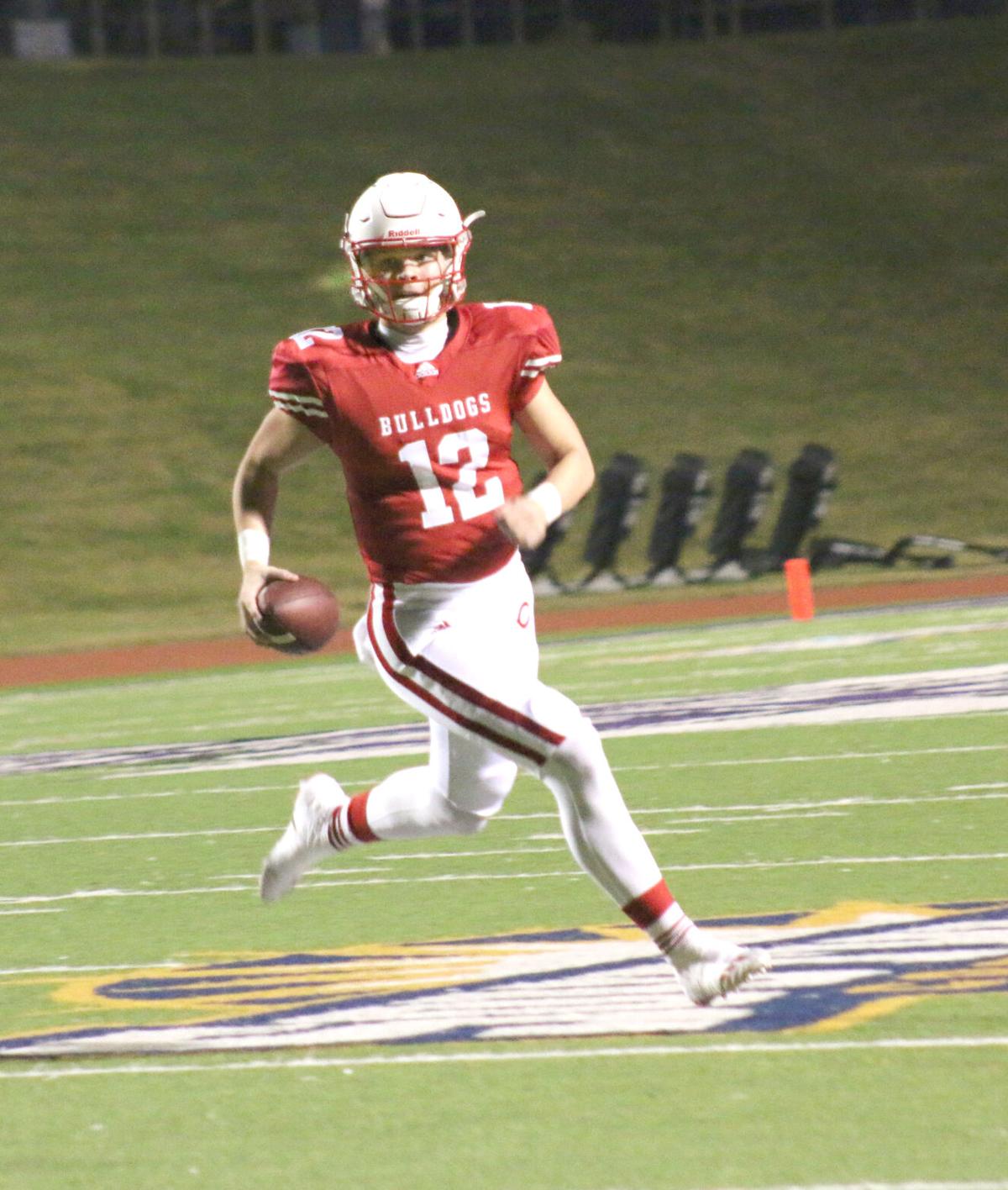 Quarterback Kai Horton rolls to his left looking for a receiver in Friday night’s 49-0 win over Silsbee. 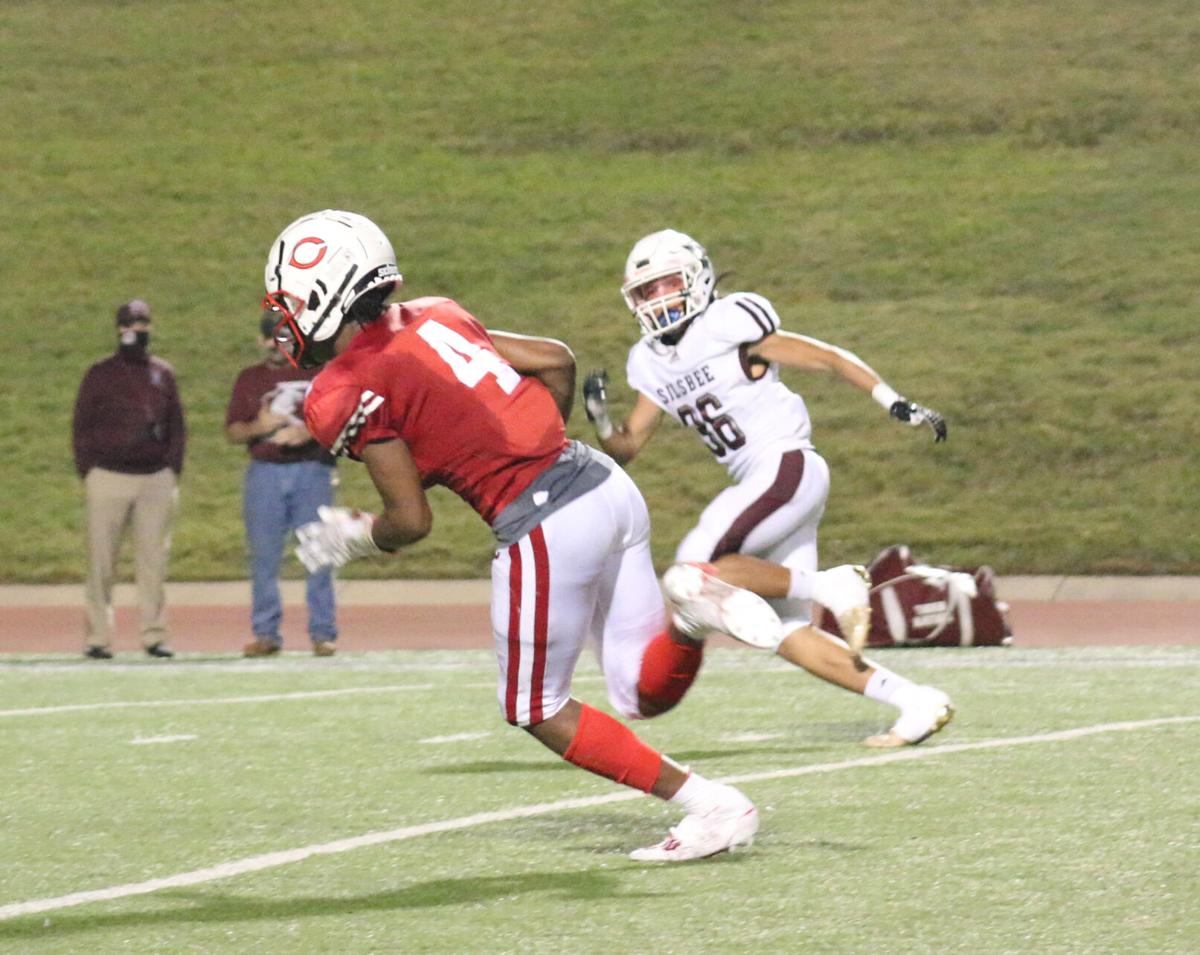 Carthage’s Montrel Hatten (4) runs away from a Silsbee defender on his way to a big gain. Hatten caught five passes for 121 yards and a touchdown in the 49-0 Bulldog win.

Quarterback Kai Horton rolls to his left looking for a receiver in Friday night’s 49-0 win over Silsbee.

Carthage’s Montrel Hatten (4) runs away from a Silsbee defender on his way to a big gain. Hatten caught five passes for 121 yards and a touchdown in the 49-0 Bulldog win.

It’s supposed to be the Region III-4A Division II semifinals on Friday night in Randall Reed Stadium in New Caney.

But it wouldn’t surprise Carthage Head Coach Scott Surratt if the Salado Eagles and their Slot-T offense try and play keep away from the top-ranked Bulldogs.

Teams that use the primarily running offense have tried that in the past and been somewhat successful limiting the high-powered Dawgs by limiting their number of possessions.

With the exception of Liberty Hill in the 2018 state semifinals, however, it hasn’t been successful enough to hand the Bulldogs a loss.

“They have a wingback that’s good running the ball,” said Surratt. “No one on our team will catch him if he gets away from us. They have another good running back and a good fullback. Their quarterback knows how to run the offense.

“They also have a big offensive line and they do a lot of cut blocks. We’ll have to be ready for them. I think we have a few good advantages. We’ll need to do a good job, too.”

Hutton Haire is the Eagles quarterback, while Noah Mescher is the fullback. Wrook Brown and Reid Vincent also get the ball out of the Eagles’ offensive set.

Brown scored two touchdowns last week against Gatesville, on short runs, while Mescher had a 6-yarder. But Vincent had a 56-yard score as well as 37-yarder that was called back.

The Eagles can and do pass — Haire threw one to Kofi Stoglin in their previous game — they’d just as soon run the ball.

“You would think that they’d be pretty one dimensional,” Surratt said. “But they have backs going in so many different directions, it’s almost like a passing game.”

Top players for the Eagles on defense are Peyton Hill, LaTrell Jenkins and Kory Welker.

“They have a good defensive line, two good linebackers and maybe the best safety,” Surratt said. Their defense plays hard and good. And they’re very physical.”

Surratt continued talking about his team.

“We’re really good and we’re polished right now,” he said. “Our O-line is going to be the best they’ve seen. We want to be as balanced as we can, but we’re going to take advantage of whatever they give us.

“We have to play good solid defense and tackle well.”

Kip Lewis continues to lead the Dawgs in tackle with 90, followed by Camden Foster with 70, Freddy Lynch with 52, Austin Morgan with 46, Nate Marry with 45, Kylon Lister has 42, Brandon King has 40, Bobby Cooks has 34 and Je’Kerrick Johnson has 33.

Giancarlos leads the team in sacks with 3, while Zay Woods has seven interceptions to lead the Dawgs, followed by King with four and Morgan with three. As a team they have seven sacks and 21 interceptions.

Offensively, Kai Horton has completed 118-of 163 passes for 1,952 yards and 20 touchdowns with just two interceptions.

Mason Courtney is the leading rusher with 846 yards and 20 touchdowns, He also has 15 receptions for 220 yards and two scores.

Craig McNew is the leading receiver with 31 catches for 517 yards and four TDs, followed by Montrel Hatten with 27 catches for 463 yards and six touchdowns. Tight end Montrell Smith has caught six for 103 and three touchdowns.