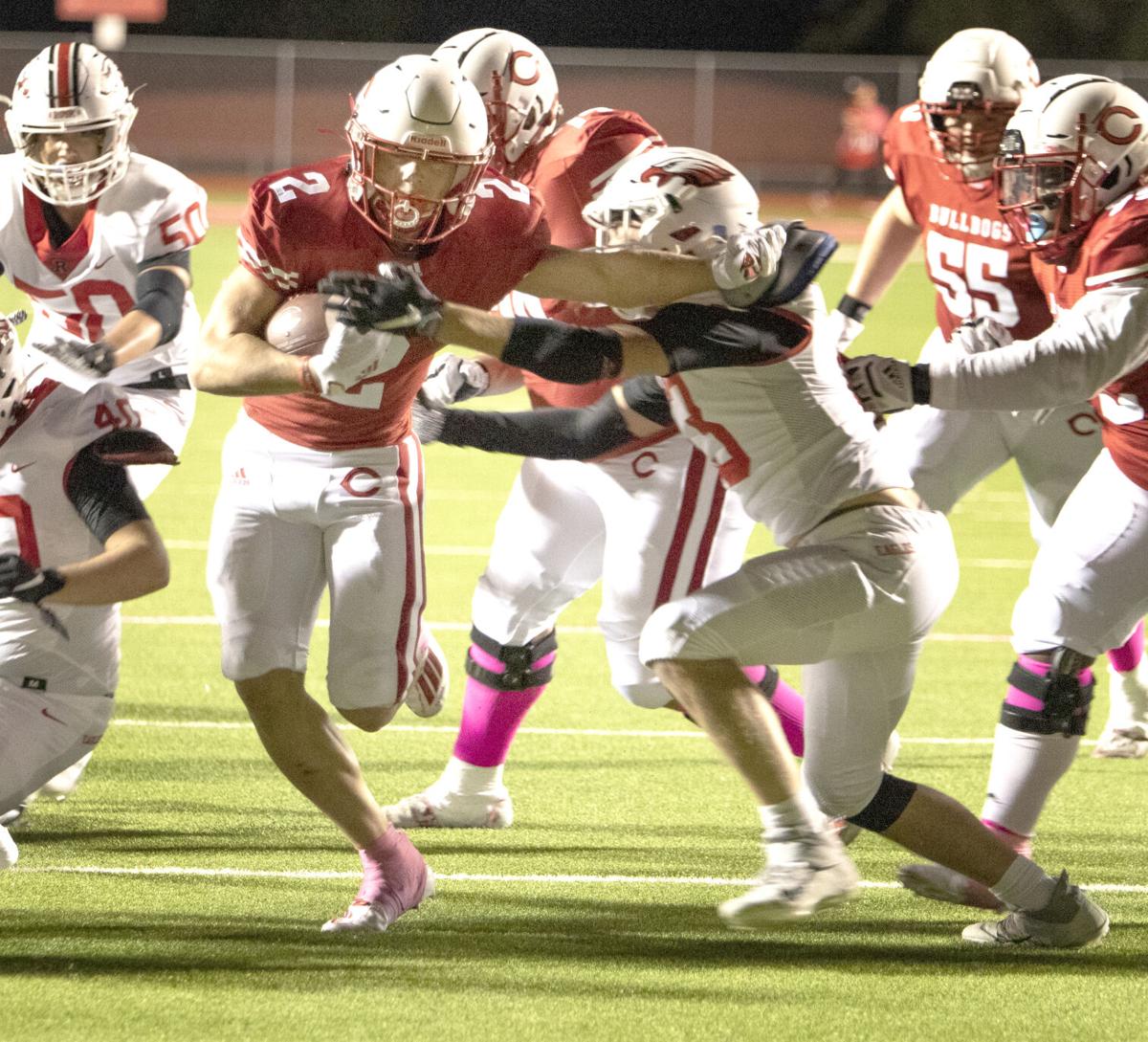 Carthage’s Mason Courtney busts up the middle for one of his two rushing touchdowns in last week’s win over Rusk. Courtney also had a 50-yard touchdown catch. 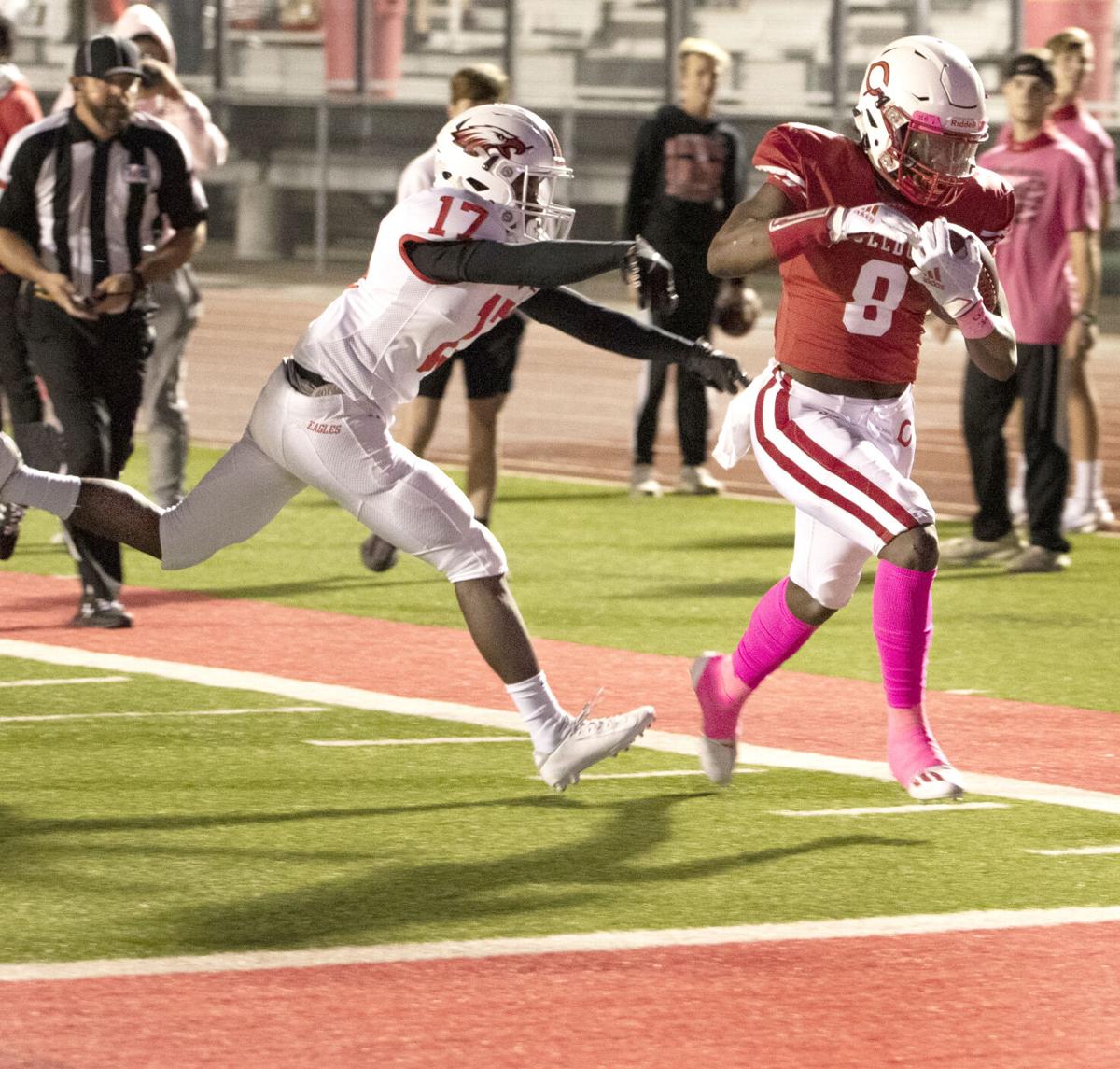 Carthage’s Kavonte Brown (8) manages to stay in bounds to finish off a 13-yard touchdown pass from Kia Horton in last week’s game against Rusk. Brown also hooked up with Horton for a 36-yard TD. 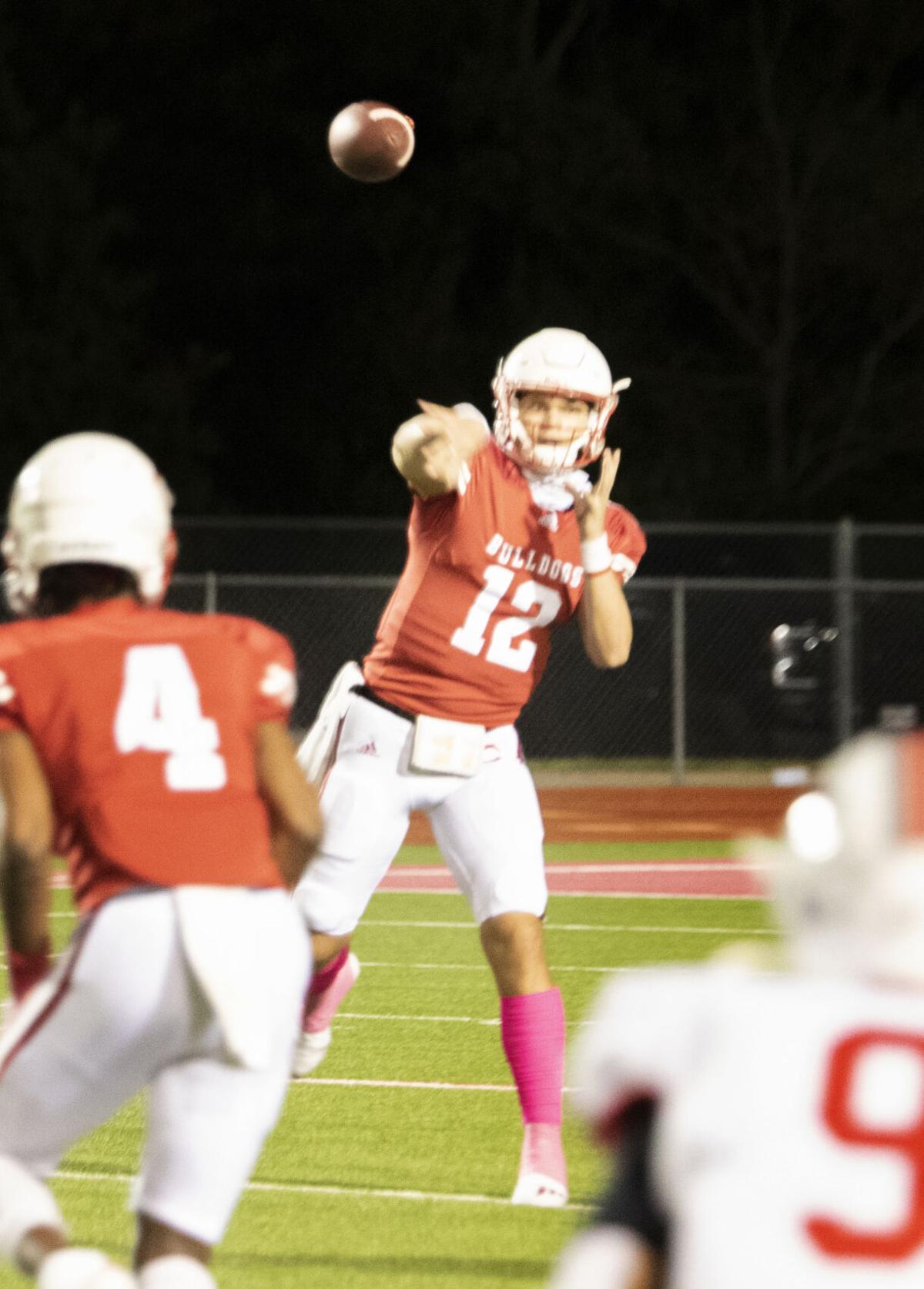 Carthage quarterback Kia Horton (12) passes to teammate Montrel Hatten (4) in last week’s game against Rusk. Horton was 11 for 11 passing for three TDs in the 51-7 win.

Carthage’s Mason Courtney busts up the middle for one of his two rushing touchdowns in last week’s win over Rusk. Courtney also had a 50-yard touchdown catch.

Carthage’s Kavonte Brown (8) manages to stay in bounds to finish off a 13-yard touchdown pass from Kia Horton in last week’s game against Rusk. Brown also hooked up with Horton for a 36-yard TD.

Carthage quarterback Kia Horton (12) passes to teammate Montrel Hatten (4) in last week’s game against Rusk. Horton was 11 for 11 passing for three TDs in the 51-7 win.

If anyone was worried about the top-ranked Carthage Bulldogs overlooking the Rusk Eagles Friday night, those worries were unfounded.

Quarterback Kai Horton was perfect passing in the first half, throwing for three scores, while the ground game of Mason Courtney and Nick Stewart added three more as the Dawgs built a big lead and never looked back on the way to a 51-7 win over the Eagles.

Carthage stays perfect for the season (6-0) and in District 10-4A (3-0) with the win, while Rusk drops to 4-4 and 1-2. The Bulldogs have just their third home game of the season next Friday night against Madisonville.

“I thought we played hard and I think we got better,” Carthage Head Coach Scott Surratt said. “On offense we executed, for the most part, very well. With our ones in there, the defense played phenomenal. They only got one first down.”

Horton ended up 11 of 11 for 195 yards with the three touchdowns, while Courtney rushed for 94 yards and two scores in less than a half and Stewart rushed for 36 yards and a touchdown on his one carry.

“His accuracy was great,” Surratt said about Horton. “He was 11 for 11 throwing in that win. He managed the game very well and our offensive line controlled the line of scrimmage.

The Bulldogs were coming off four straight games against ranked opponents. But the Eagles, who had less than 30 players dressed, were simply overmatched.

The first TD came on a pass to Courtney. He was wide open over the middle and then ran over several Eagles on his way into the end zone from 50 yards out.

Horton connected with Kavonte Brown on a 13-yard touchdown next to make it a 14-0 game.

An Eagle fumble recovered by linebacker Camden Foster, got the ball right back for the Dawgs and they used up almost six minutes on the clock with Courtney going over from the 1 to make it 21-0.

After another 3-and-out, it took Carthage just one play to score as Horton hit a wide-open Brown in stride to make it 28-0.

Another short Rusk punt — they had two less than 10 yards as well as one blocked for a safety — set up the Bulldogs at the 36 again. Stewart went in from there to make it 35-0.

Kip Lewis blocked the next Rusk punt and tried to scoop and score, but was unable to corral it and it went out of the back of the end zone for a safety to make it 37-0.

It took Courtney two plays to get it back in the end zone after the free kick as he picked up 30 yards on the first play and scored from the 11 to make it 44-0.

It could have been worse at the half as Zay Woods picked off a pass and returned it deep into Eagle territory. But a penalty wiped out most of the return yardage and the Bulldogs held the 44-0 lead at the half.

The second half was played with a running clock and the Eagles finally got on the scoreboard early in the fourth quarter as Owen McCown scored from the 3.

But the Carthage second team matched that score with one of their own as Tavarius Johnson scored from the 9 to make the final 51-7.

Rusk finished with 53 yards rushing and 57 passing with Chris Lawson leading the way with 50 yards.

Lewis and Freddy Lynch led the Dawgs’ defensive effort with five tackles each and Ethan Kimberly and Shannon Reeves matched that number. The team had six different players with four tackles on the night — Foster, Brandon King, Grady Tatum, Bobby Cooks, Kylon Lister and Ty Brown. Tatum got the only sack.

The Dawgs had four 3-and-outs in the first half, also getting a fumble recovered by Foster and Woods’ interception.

It took the visitors nine plays to cover the short 32 yards for their only score.

The Carthage coach also liked the job done by his kickers — he used three of them — Irvin Jimenez, Pedro Garcia and Dawson Smith.

“The three kickers placed the ball very well, both on extra points and kickoffs,” Surratt said. “Placement of the ball was very important with that wind.

“I think we performed very well.”

Players of the Game for the Bulldogs were: Freddy Lynch on defense; Kavonte Brown on offense; and Jimenez, Garcia and Smith for special teams.