Beckville’s J’Koby Williams (2) gets away from one Hearne defender as the Eagles’ Jeremy Seymore (9) tries to catch him. Williams had 107 yards and a 49-yard touchdown. Beckville running back Milo Morrison (13) picks up good yardage as Hearne’s Jeremy Seymore (9) tries to catch him. The Bearcats won the area round playoff game 41-38. 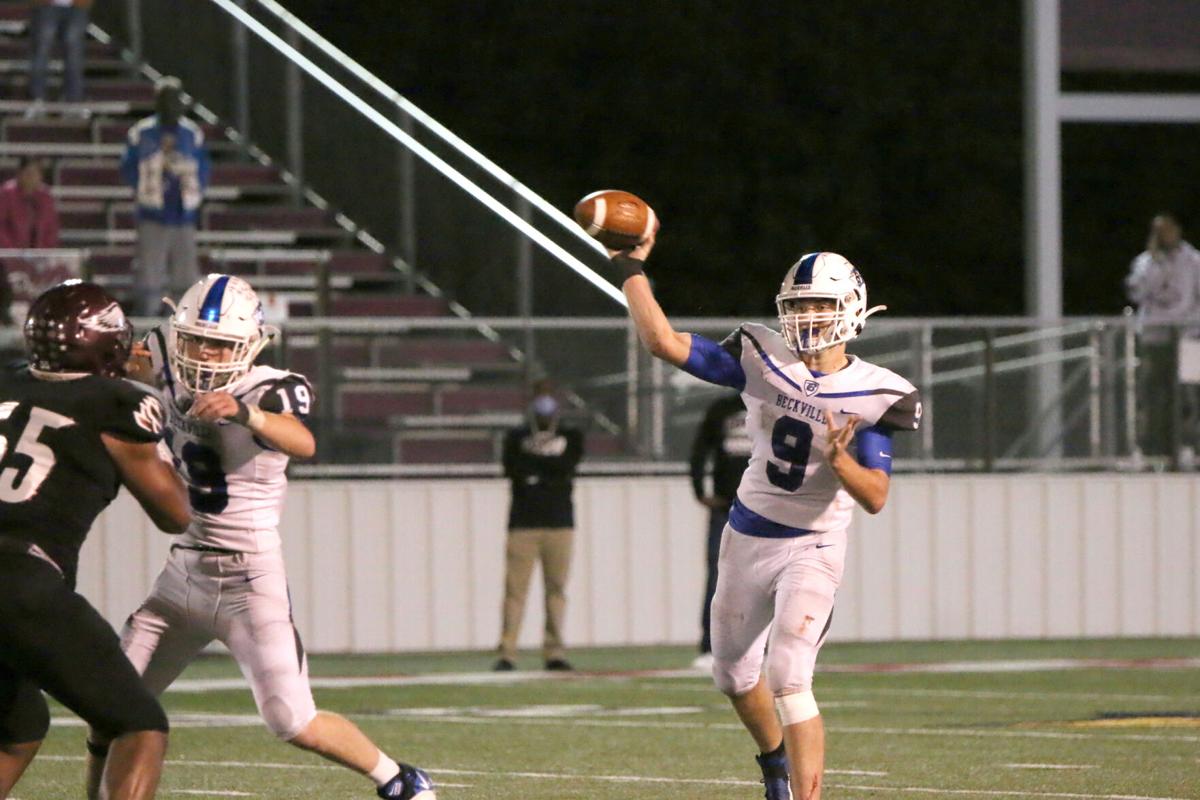 Beckville quarterback Ryan Harris lets one fly as teammate Jeremiah Steph (19) blocks for him. Harris completed just one pass, but ran for 236 yards and five TDs in the Bearcats’ 41-38 win over Hearne.

Beckville’s J’Koby Williams (2) gets away from one Hearne defender as the Eagles’ Jeremy Seymore (9) tries to catch him. Williams had 107 yards and a 49-yard touchdown.

Beckville running back Milo Morrison (13) picks up good yardage as Hearne’s Jeremy Seymore (9) tries to catch him. The Bearcats won the area round playoff game 41-38.

Beckville quarterback Ryan Harris lets one fly as teammate Jeremiah Steph (19) blocks for him. Harris completed just one pass, but ran for 236 yards and five TDs in the Bearcats’ 41-38 win over Hearne.

He would score four more times on the night and the Bearcats needed every one as they knocked off previously unbeaten Hearne 41-38 in the Region III-2A Division I area playoff game at Bruce Field.

The Bearcats improve to 9-3 for the season and will play the winner of Friday night’s game between Carlisle and Normangee. The Eagles finish the season at 9-1.

The contest was a back-and-forth affair pitting the running the game of Harris and the Bearcats against the passing game of Micah Smith and the Eagles.

The Bearcats ended up with 353 yards rushing and six rushing touchdowns, while Smith passed for 380 yards and four scores.

The difference in the game came down to PATs as Jayden Mojica was 5-of-6 on extra points for the Bearcats, while the Beckville defense blocked the Eagles’ first PAT attempt and Hearne was 1-for-5 on two-point conversion attempts the rest of the way.

Jeremiah Steph got the blocked PAT for the Bearcats.

Harris, Beckville’s single-season TD leader with 29, also became the single-season rushing leader as his 236 yards gives him 1,907 yards, breaking the previous record of 1,874.

“We had a lot of guys make big plays for us on the night, but Ryan just put us on his back,” Beckville Head Coach Cody Ross said. “He just wasn’t going to let us lose that football game. When you put the ball in his hand, he makes things happen.

“He’s just a football-playing dude and I’m glad he’s on our side.”

While his first touchdown gave him that record, his final touchdown of the night — a 1-yard plunge — might have been the biggest of the season.

Leading 35-32 with 9:50 left in the game, Harris took the Bearcats on a 6:59 drive from just inside their own territory.

Smith, who had already thrown TD passes of 38, 31 and 37 yards, started from his own 42 and quickly found himself in a hole facing a fourth-and-18.

But he completed a 41-yard pass to Jabari Dunn over the outstretched hand of a Beckville defender for the first down with 1:07 remaining.

Another sack backed the Eagles up, but he completed a 17-yarder to Keyshawn Langham on a fourth-and-11 to keep things going.

Two plays later he connected with Langham again from the 14 to make it a 41-38 game with three seconds left. The try for two failed.

“We knew he (Smith) could throw it and he did it well,” Ross said. “We knew some of that was going to happen. Banging No. 1 (Smith) up early helped us some and helped us shut down their running game. They had some talented receivers and that kept them in the game.”

Adam Gregory recovered the onside kick, and the Bearcats went into victory formation for the final play of the game.

J’Koby Williams rushed for 107 yards on the night and scored the other Beckville touchdown on a 49-yard run. Milo Morrison rushed for 30 yards.

“No. 2 (Williams) and No. 13 (Morrison) are why people can’t just concentrate on Ryan,” Ross said. “I don’t think they realized just how athletic he is. They kept giving him false keys, but you can’t throw him for a loss. He just won’t go down.

“We just formation people to death. At the end of the day, he’s going to keep it when he needs to. We’ll keep doing what we’re doing until someone figures it out.”

Beckville pounded out the first TD of the game behind the running of Harris and Williams.

They took almost six minutes off the clock and used 12 plays, picking up a key first down on a fourth-and-two. Harris went in from the 5 and the Bearcats led 7-0.

The Eagles wasted little time — 49 seconds — getting into the end zone to match the score. Two plays after Jeremy Seymore ripped off 17 yards, Smith hit a wide-open Dunn for 38 yards and a touchdown.

Williams did the damage on the next Beckville possession, bursting through a big hole and outrunning the Eagle defenders for a 49-yard touchdown.

Hearne got another TD before the first quarter was finished with Smith scrambling for a first down on a fourth down, then going in from the 4, three plays later.

The pass for the two-point conversion was incomplete to make it 14-12.

A Beckville fumble gave the Eagles the ball in prime scoring position, but the Bearcat defense held to keep the lead.

They would add another score in the second period with Harris going in from the 8 to make it 21-12. He set up the TD with a 33-yard run.

Jeremiah Gerode got the Eagles going with a 35-yard reception on their next possession, which finished with a 4-yard run by Milton Redmon. Justavian Bendford caught the conversion pass to cut the lead to 21-20 with 5:09 remaining.

Beckville appeared ready to add to the lead right before the half as Matt Barr completed a double-reverse pass to Harris at the 1 on a fourth-down pass. A penalty against the Bearcats wiped out the play and the Eagles stopped the threat.

The Bearcats held the Eagles to just 21 yards rushing on the night, while Harris completed just 1-of-3 passes for 9 yards. It did, however, pick up a key first down.

There was only one punt the whole game — by the Eagles.

“I told them after the game that you don’t get this far and have things get easier,” Ross said. “You have to be able to take some punches; take some adversity; and how you handle that determines if you win or lose.”