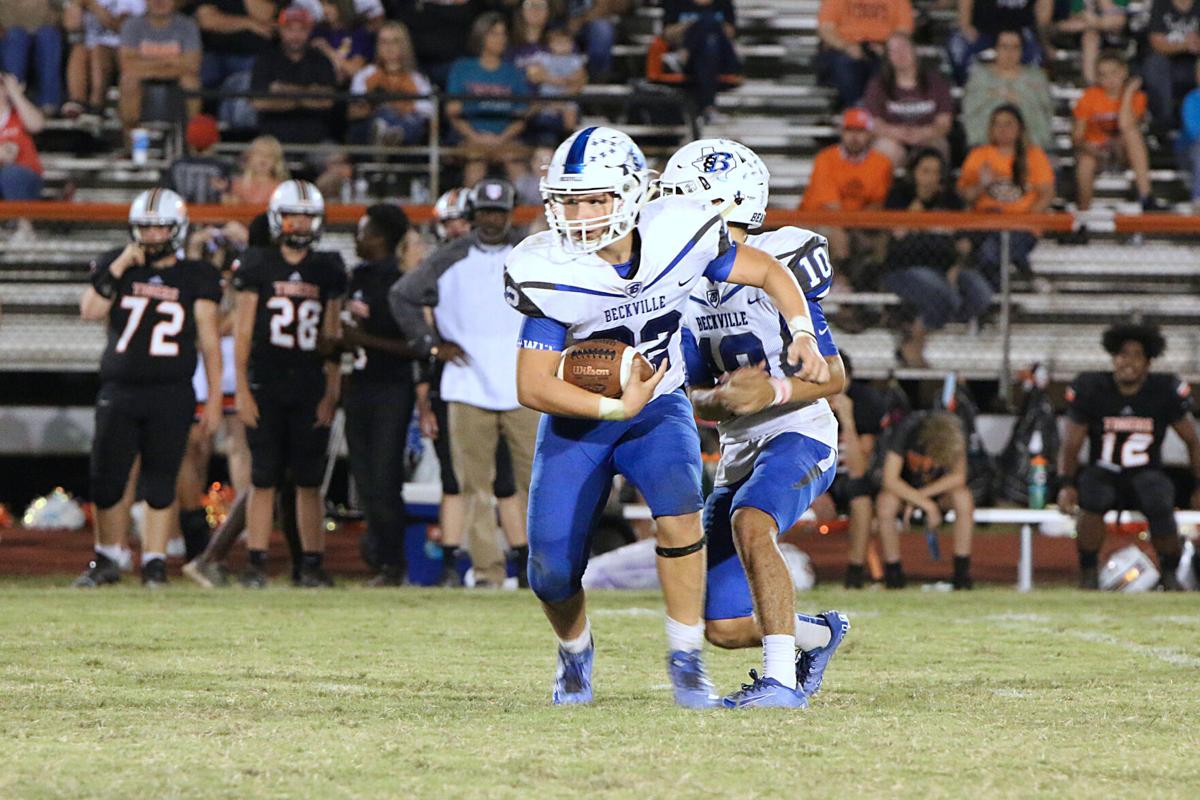 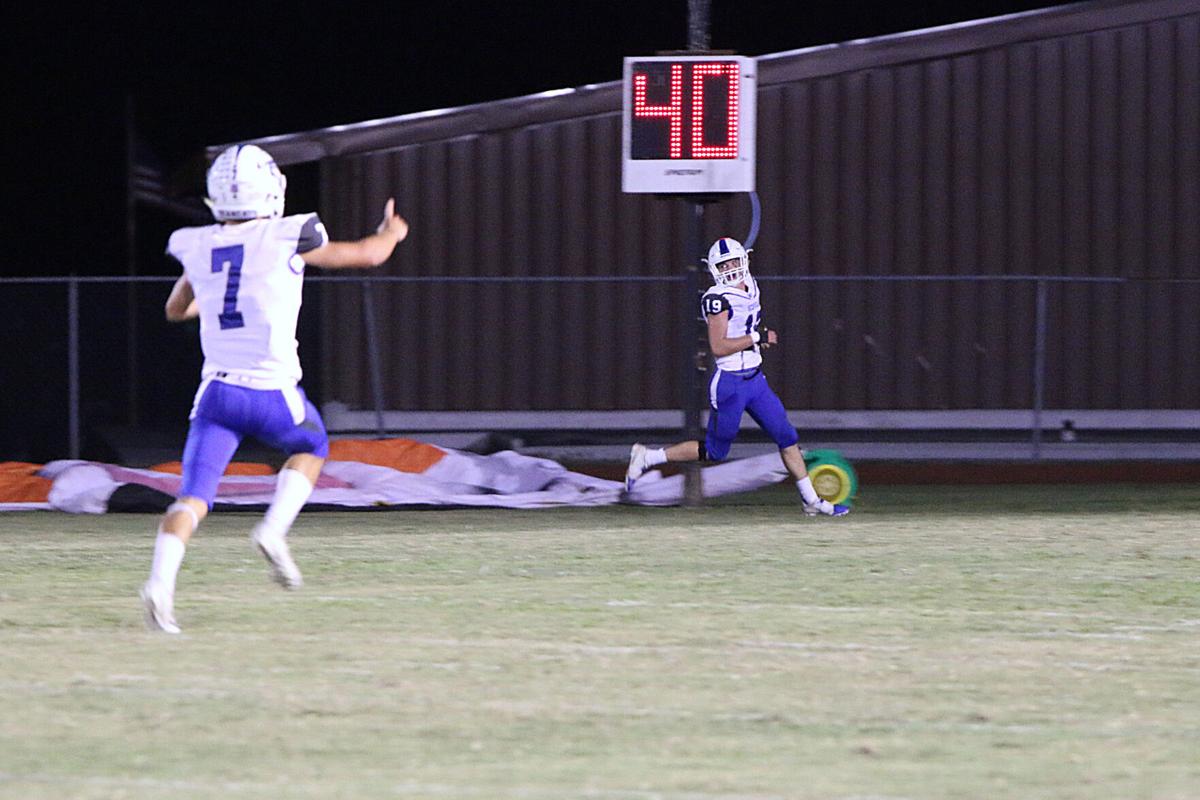 Beckville’s Jeremiah Steph finishes off his 61-yard interception return for a touchdown in the Bearcats’ win over West Sabine. 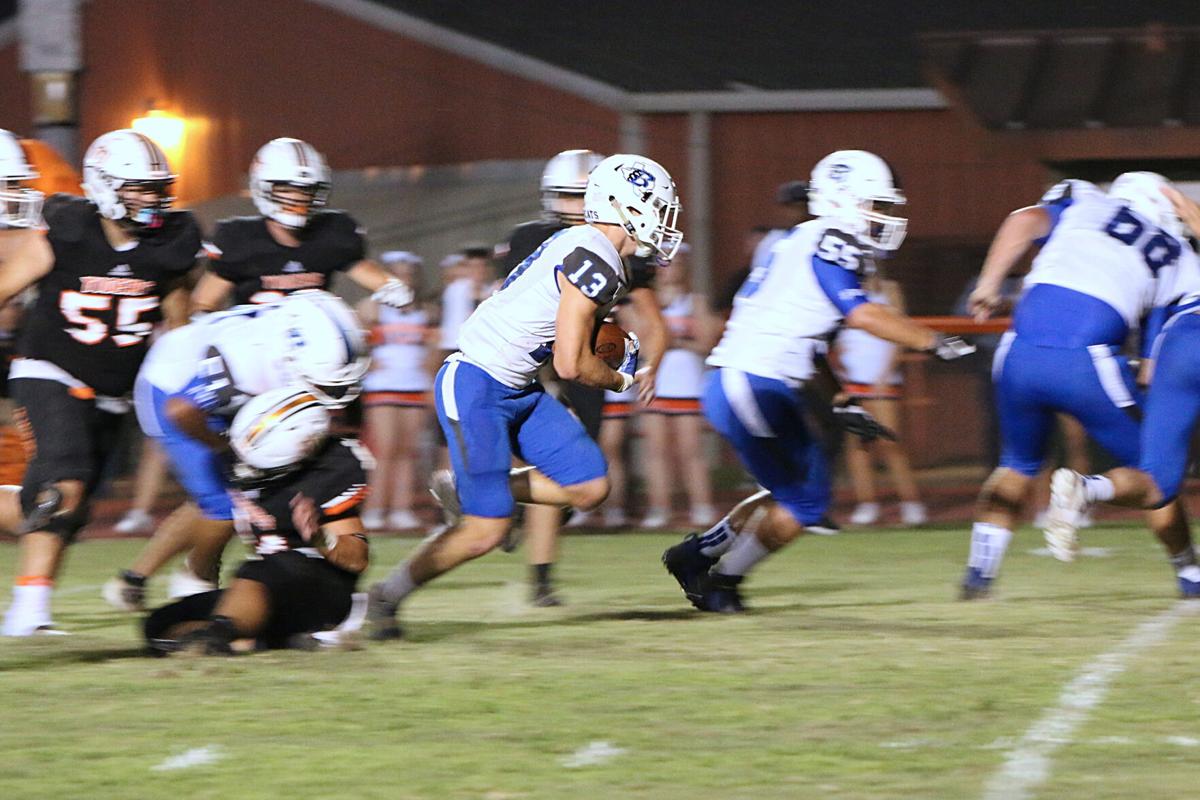 Beckville’s Jeremiah Steph finishes off his 61-yard interception return for a touchdown in the Bearcats’ win over West Sabine.

After an 0-2 start, the Beckville Bearcats have rebounded quite nicely to even their record at 2-2 for the season.

The offense has come alive in those last two games, putting up 134 points and more than 1,000 yards of total offense.

They’ll try to make it three-in-a-row this Friday night as they play host to the Carlisle Indians in a 7:30 p.m. kickoff in R.C. Beauchamp Stadium.

This is the District 9-2A Division I opener for both schools.

“You always want to go into district with momentum,” Beckville Head Coach Cody Ross said. “We’ve got about as much momentum as you can have. The first half of the Maud game we really didn’t play that well. But starting in the second half and then last week, we’re really playing well offensively.

“Only one turnover last week and that was with the reserves. I think we’re going into district about as well as can be expected.”

The Indians are also 2-2, but they are coming off a 54-19 loss to undefeated Timpson.

“They have a really talented quarterback and they have a lot of good skill people. They’re going to come over here ready to go. This is the first district game for them, too, and they want to start off well. This will be our first big test.”

Quarterback Carlos DeLeon is a dual-threat as he rushed for more than 1,500 yards and 20 TD and passed for another 1,300 yards and 11 more scores.

Running back Jamion Turner also returns, and he was a 1,000 yard rusher who scored 14 TDs last season.

Wide receiver Aaron Gallegos is a threat on both sides of the ball.

Turner also leads their defense after 81 tackles with 15 of them behind the line of scrimmage last year.

“No. 12 (Matthew Rigdon) is a big player for them and they’re pretty big up front with No. 10 (Xaryus Sheppard) at defensive end,” Ross said. “They’re like us in that they have a lot of people who go both ways. They can create some problems for us.”

The Bearcats have rushed for 1,365 yards and passed for 272 yards through the first four games. They are averaging 409.3 yards and 39.3 point per game.

Freshman J’Koby Williams leads the team with 531 yards rushing and seven TDs, while he has caught seven passes for 107 yards and a score.

Quarterback Ryan Harris has rushed for 386 yards and six TDs, while completing 16 of 32 passes for 272 yards and two TDs.

Senior Milo Morrison has 293 yards and two TDs on the ground.

Bo Hammons leads the Bearcat defense with 35 tackles, a sack and a pair of forced fumbles.

Harris has 29 stops and a sack, Jeremiah Steph has 24 tackles and Morrison has 21.

Keyon Lewis is the sack leader with two, while Brady Davis has two fumble recoveries and Williams has two interceptions.

“We need to continue to do what we’ve been doing,” Ross said. “What we do hasn’t changed any. We just throw a few different wrinkles in it every week. That’s been pretty good for us right now.

“This is going to be a tough contest. We have to be ready to play.”

The Harris Rating System has this game as a pick ‘em.