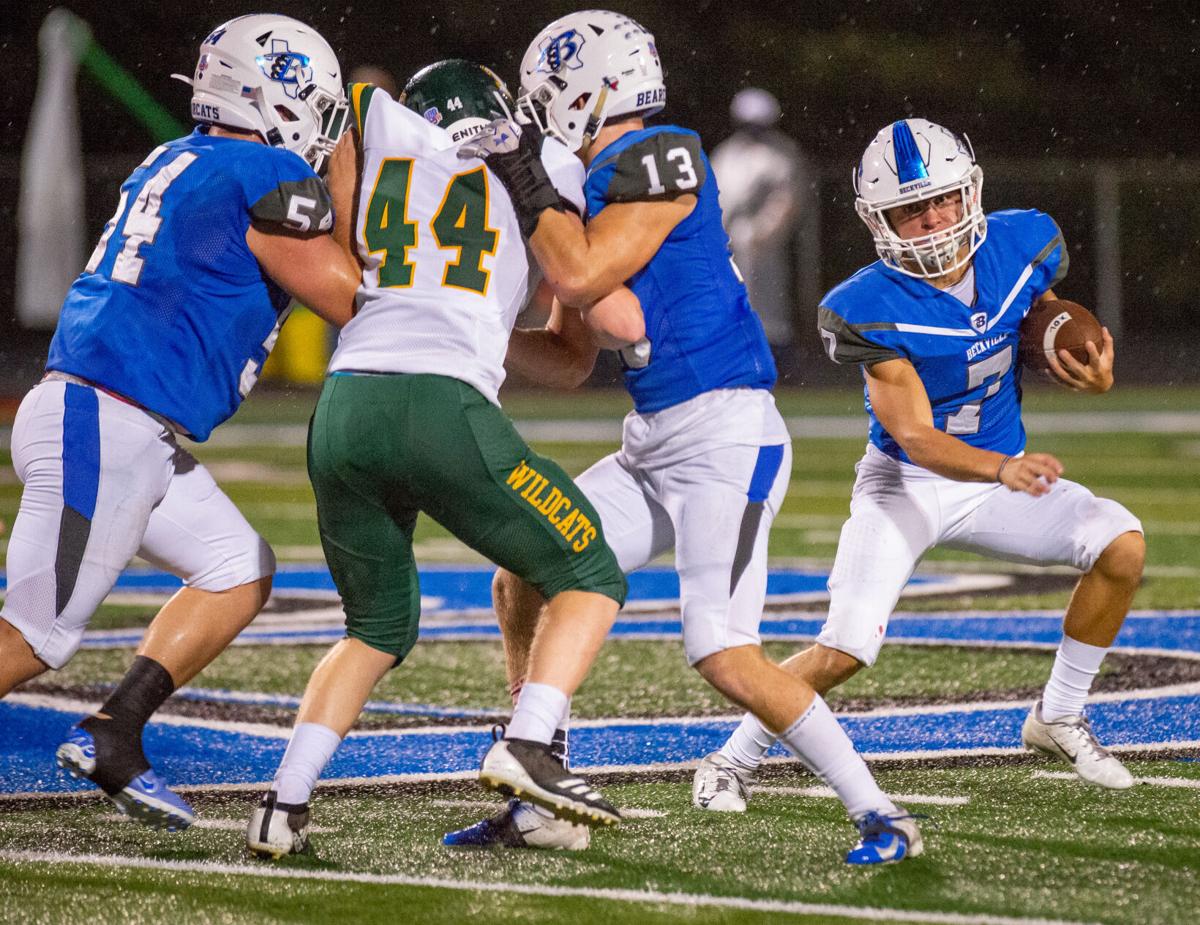 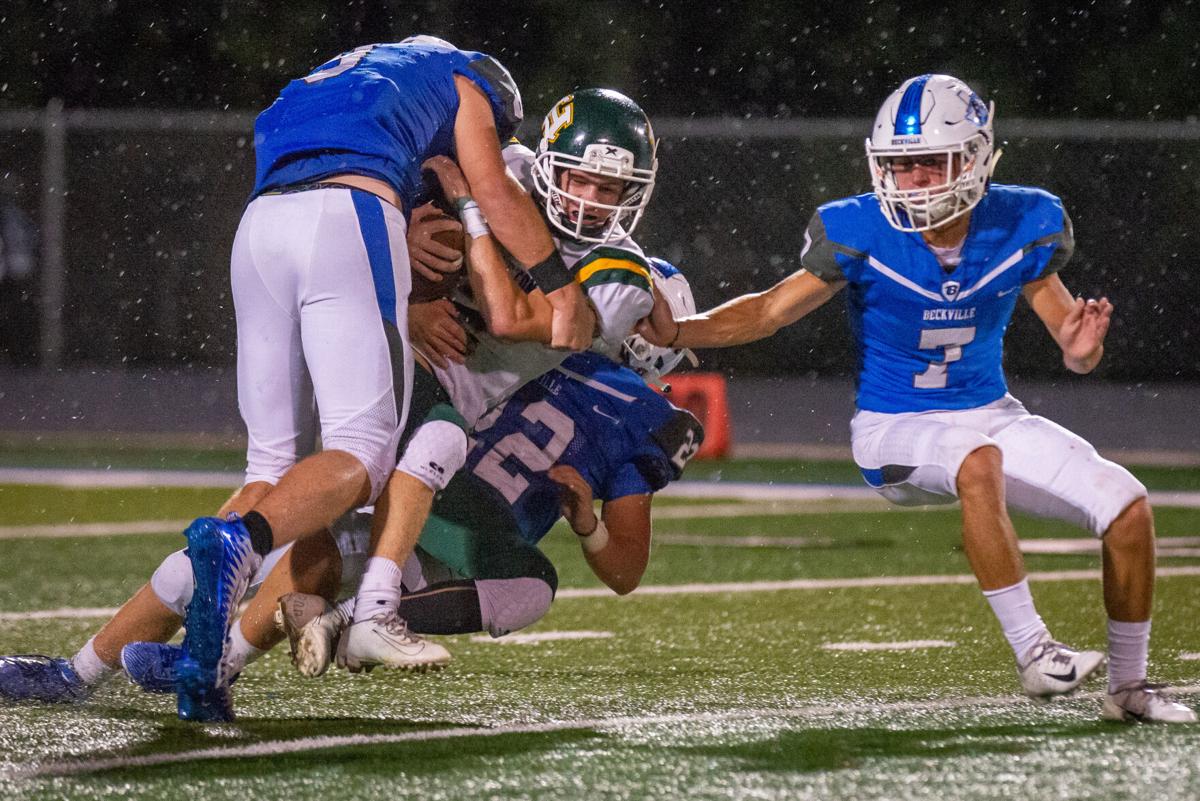 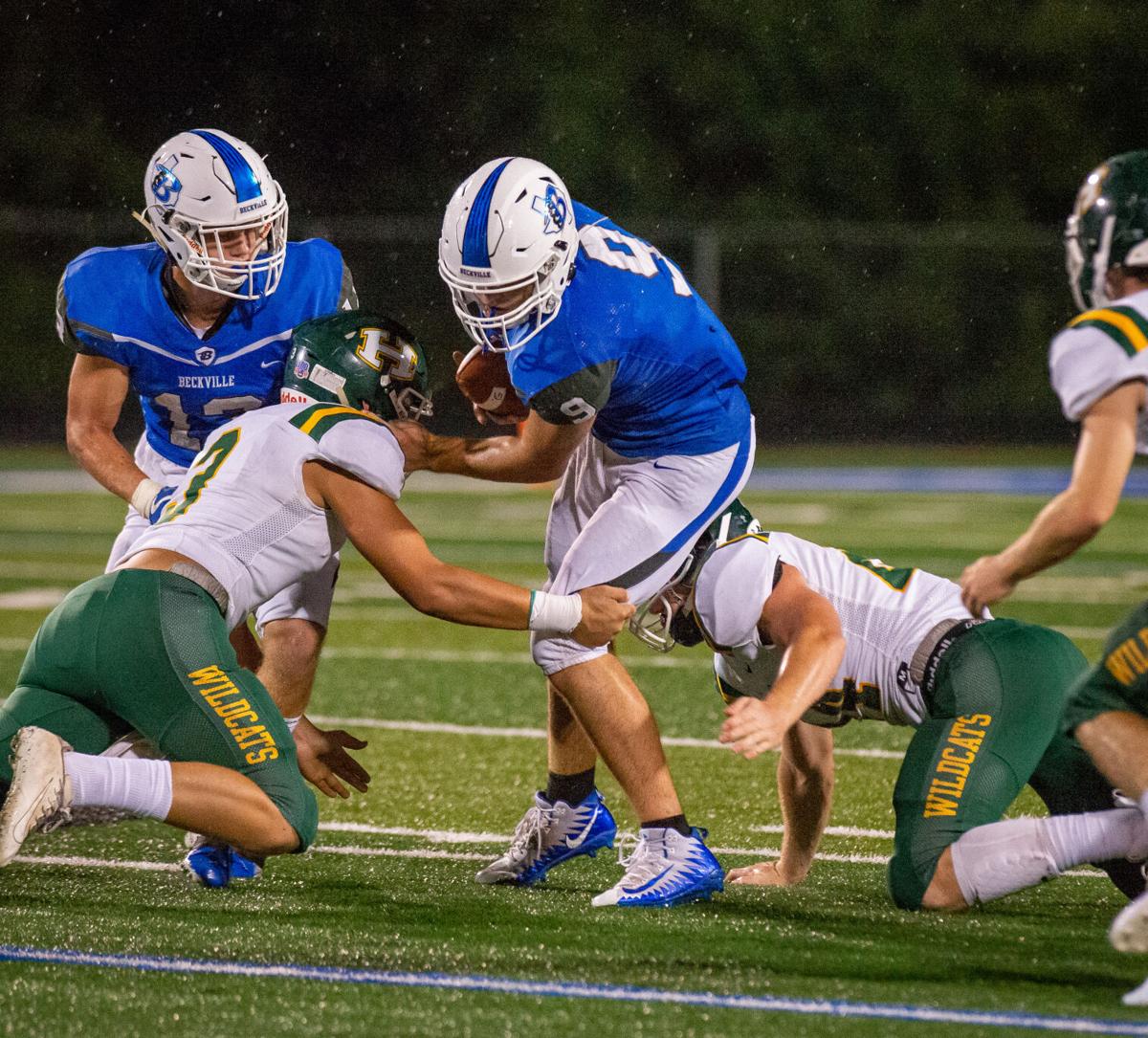 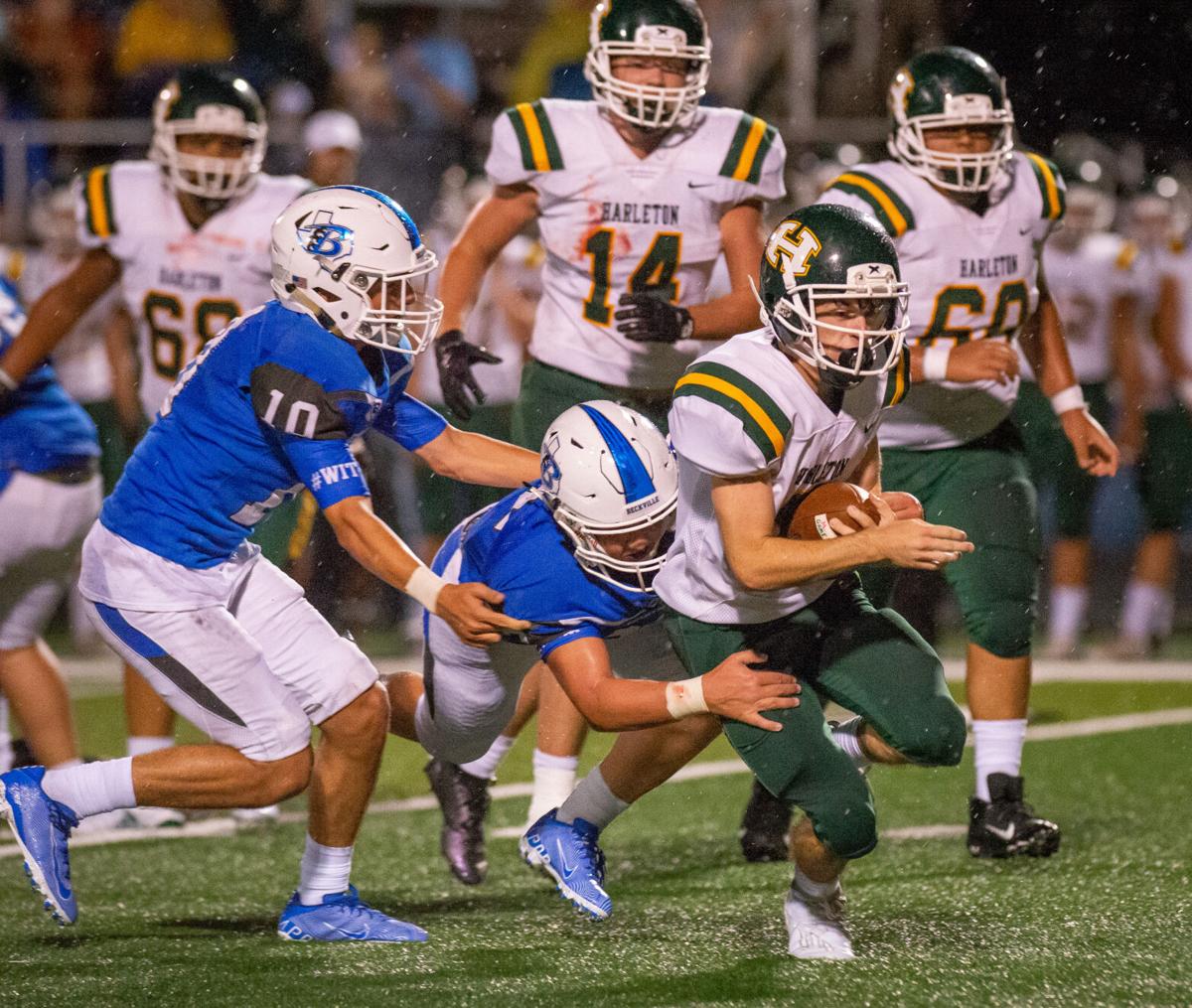 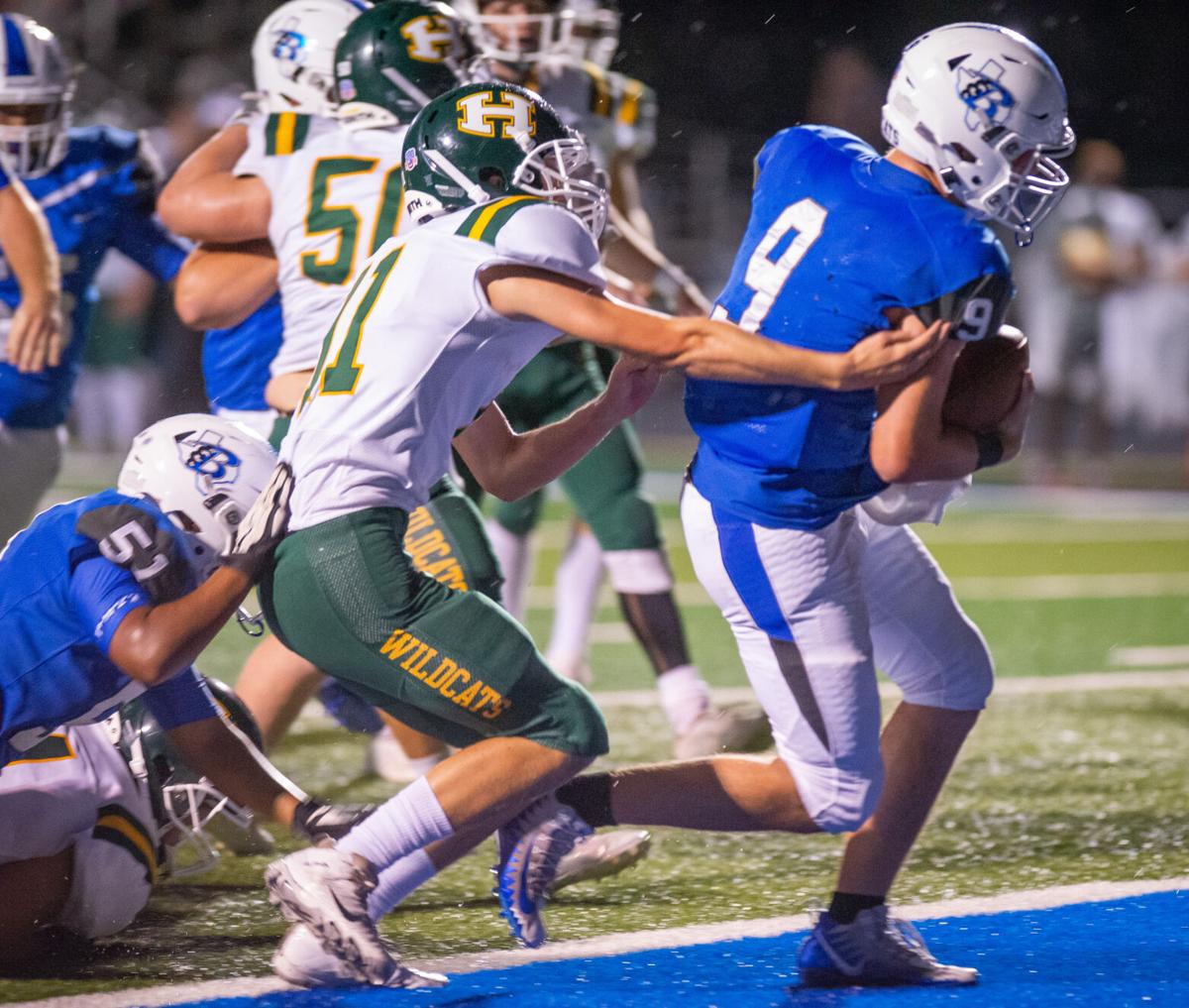 BECKVILLE — Ryan Harris had a big game for the Beckville Bearcats Friday night in R.C. Beauchamp Stadium on both sides of the ball.

But it still wasn’t quite enough to lead the Bearcats to their first win of the season.

Harleton’s Van Ring snuffed out a halfback pass on the final play of the game as the Wildcats held on for a 23-20 win.

The loss drops the Bearcats to 0-2 for the season heading into Friday night’s Homecoming game against Maud. Harleton is 1-0.

“It went back-and-forth all night and it was a tough one to lose,” Beckville Coach Cody Ross said. “I thought we played well enough to win. I felt like we let another one get away from us.

“We’re just not making enough plays, and they made a few more than we did. I’m proud of the kids. We limited our mistakes, scored more points, but we still have to find a way to win.”

The Bearcats’ two losses have been by a total of five points.

The final play, which was supposed to be a halfback pass from Milo Morrison with Harris as the intended target, saw the Bearcats end the game deep in Wildcat territory.

Taber Childs’ 6-yard touchdown run, his second of the game, put the Wildcats up by three in a game that saw the two teams exchange leads seven times.

The Bearcats started the final drive at their own 45 with 1:56 left in the game.

They quickly found themselves facing a fourth-and-8 with 41 seconds left, but freshman J’Koby Williams, who made several big plays on the night, made another one then as he picked up 25 yards on a reverse.

Harris picked up a first down with an 11-yard run and Williams got four more to put the ball at the 15 with 12 seconds left.

The Bearcats spiked it to stop the clock, and a third-down pass by Harris was incomplete.

He took the snap one the fourth-down pass, handed it off to Morrison, who was sweeping left, and then took off down the field and was open.

But Morrison never got a chance to get off the pass.

The loss overshadowed the big night by Harris as he had 64 yards and scored all three touchdowns on runs of 7, 2 and 1 yards.

He may have been more impressive on the defensive side of the ball as he finished with 18 tackles, 15 of them solo, along with a tackle for loss, a sack and a blocked PAT.

“He was just all over the field,” Ross said. “That’s the reason we moved him to linebacker from safety to take advantage of that. He was big for us.”

A 30-yard JoJo Clark field goal in the opening period ended up being the difference in the game as the Beckville defense tightened down close.

An interception by Williams got the Bearcats going in the second half and Harris again did the scoring, going in from the 2.

“That was a big one,” Ross said of Williams’ interception where he seemed to come out of nowhere and stepped in front of a seemingly wide-open receiver.

“That was the second one he’s gotten for us and he was about one block from taking it to the house. It was a big momentum shifter.”

The power running of Childs gave the lead back to the Wildcats as he went over from the 3 early in the fourth quarter.

Harris scored his third TD with 4:53 left on a 1-yard run and Williams ran in the 2-point conversion.

A throwback screen to Drew Stafford got the Wildcats close and Childs, who rushed for 82 yards, scored the winning TD.

Other defensive standouts for the Bearcats were Bo Hammons with 10 tackles, Jeremiah Steph with nine tackles, Matt Barr with seven stops, Keyon Lewis with five tackles and a sack, and Williams had three tackles to go along with his interception.