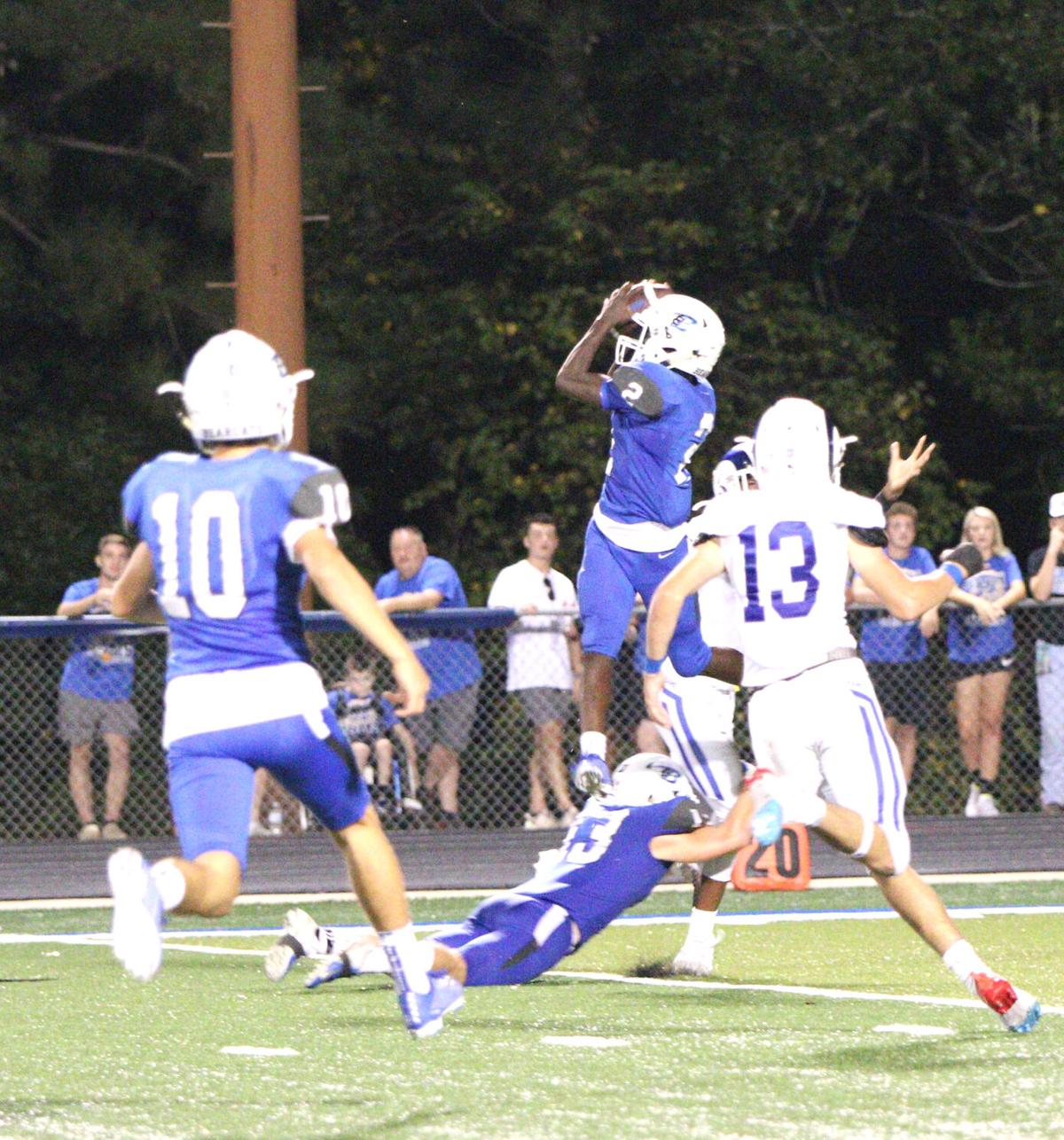 Freshman JaColby Williams makes one of his five catches on the night against Joaquin. One of Williams’ catches was a touchdown. 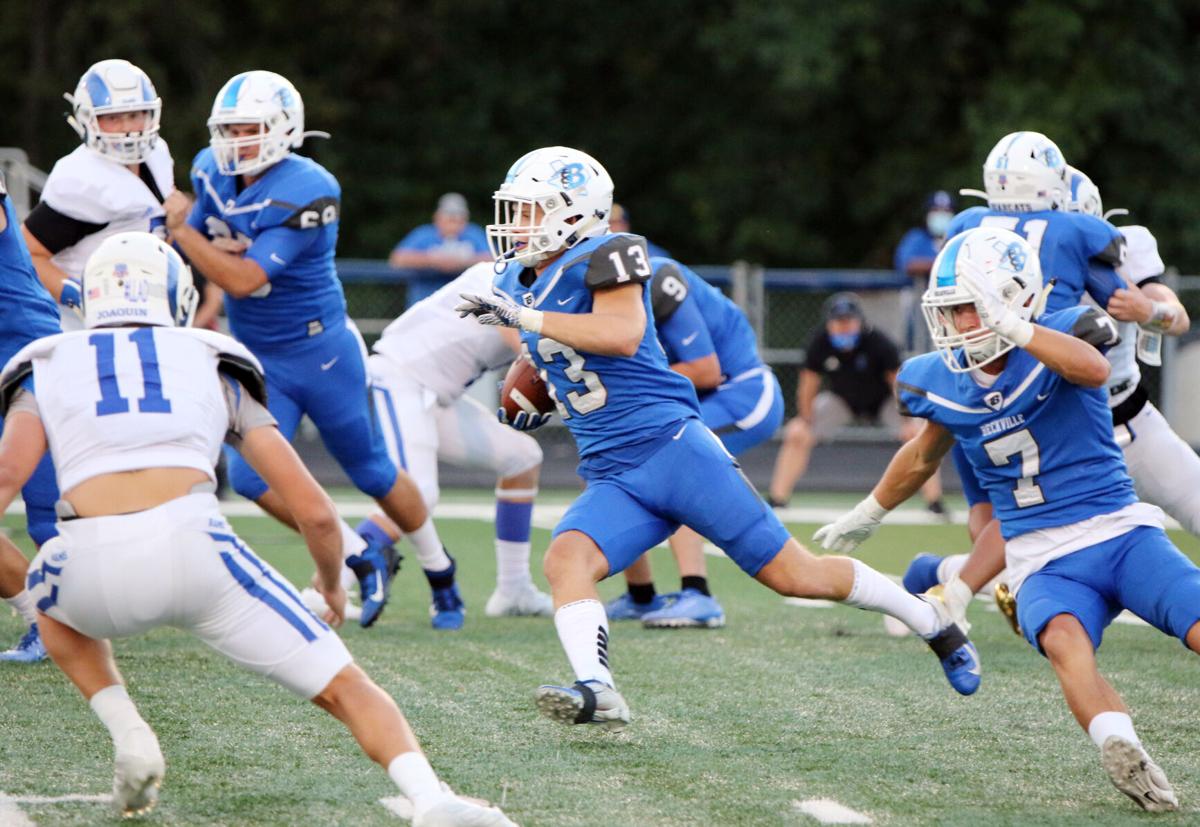 Beckville’s Milo Morrison see a hole and cuts upfield into it against Joaquin last Friday night. Morrison led the Bearcats with 75 yards rushing and 11 tackles. 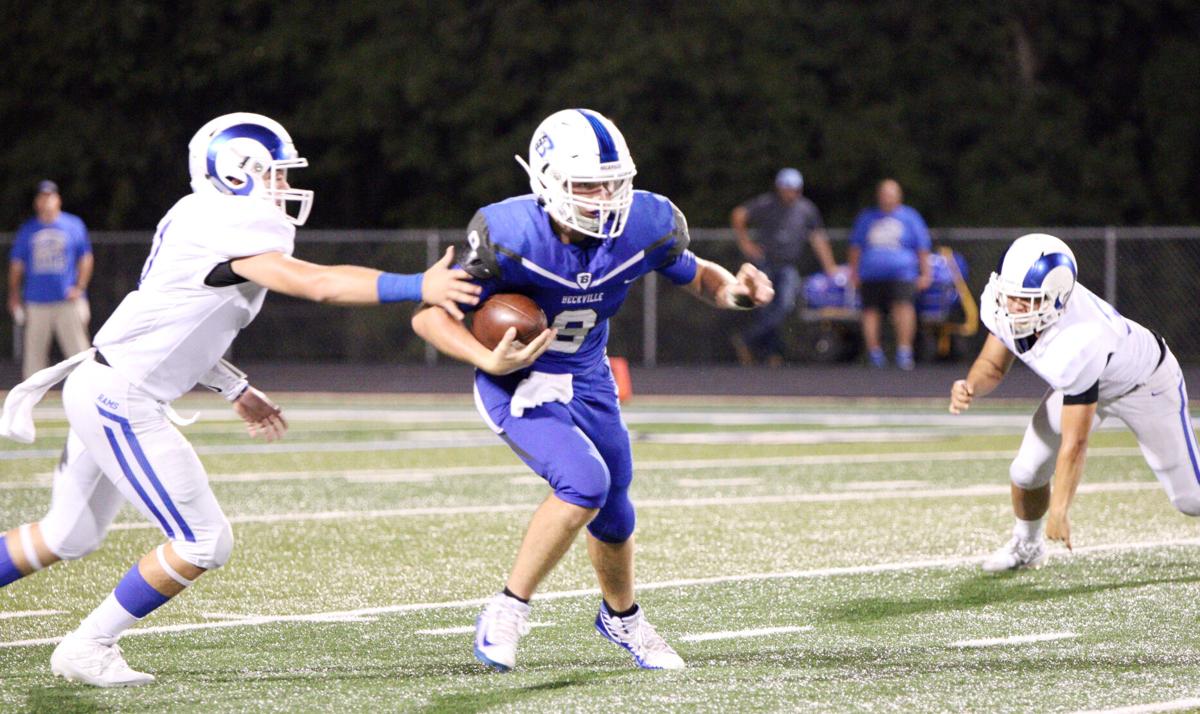 Freshman JaColby Williams makes one of his five catches on the night against Joaquin. One of Williams’ catches was a touchdown.

Beckville’s Milo Morrison see a hole and cuts upfield into it against Joaquin last Friday night. Morrison led the Bearcats with 75 yards rushing and 11 tackles.

BECKVLLE — The Beckville Bearcats got in scoring position twice in the final four minutes of the game but came away empty both times as the Joaquin Rams came away with an 8-6 win Friday night at R.C. Beauchamp Stadium.

The game was originally scheduled for Joaquin, but overnight rain put the field under water.

“I was pleased with the way we played,” Beckville Head Coach Cody Ross said. “The defense was really impressive. We played well up front.

“On offense, we had a 3-and-out and punted the first possession, and we didn’t punt again for the rest of the night. We had opportunities to get into the end zone. We just didn’t finish the drives.”

The Bearcats put together a drive in the second quarter that hit pay dirt. Quarterback Ryan Harris completed a 15-yard pass to JaColby Williams. They went for two, but fell short of that because of a bad snap.

“We should have gotten the two-point conversion,” Ross said. “They (Joaquin) lined up perfectly to run the swinging gate. But we snapped the ball over the quarterback’s head.”

The 6-0 lead held to the half, but the Rams came out strong in the third quarter.

Joaquin put together a 15-play drive, ending with a short run for the score. The Rams were successful on their two-point conversion to take the 8-6 lead.

The Bearcats came back with a drive of the own and managed to get inside the 30, only to fumble away.

With time running out in fourth quarter, they got the ball in their end with 3:31 left and managed to drive to the 30 again — only to have one of Ryan’s passes picked off at the 5.

The defense would once again stop the Rams, getting the ball back with 1:30 left.

The offense would drive to the 18 before bogging down and a desperation fling into the end zone was picked off. The Rams then ran out the clock.

“I liked what I saw ,” Ross said. “We had too many turnovers — although two were desperation throws. I think we’re going to be all right in the long run.”

Harris was 5 of 11 passing for 64 yards with one touchdown. He also ran 14 times for 73 yards. Williams was the beneficiary of all Harris’ completions, catching five for 64, while running the ball seven times for 30 yards.

Milo Morrison was the leading rusher with 14 carries for 74 yards. Karter Jones had two carries for 11 yards.

The defense also played well, limiting the Rams to just one score.