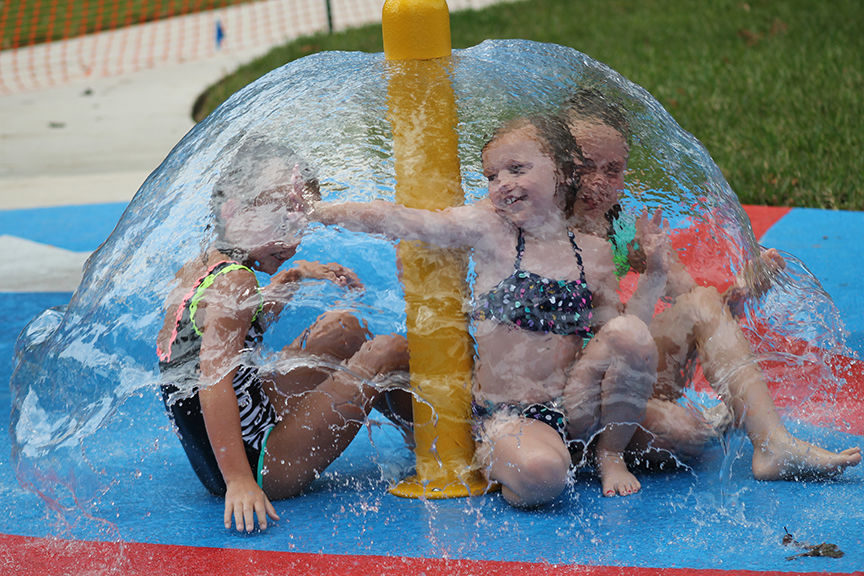 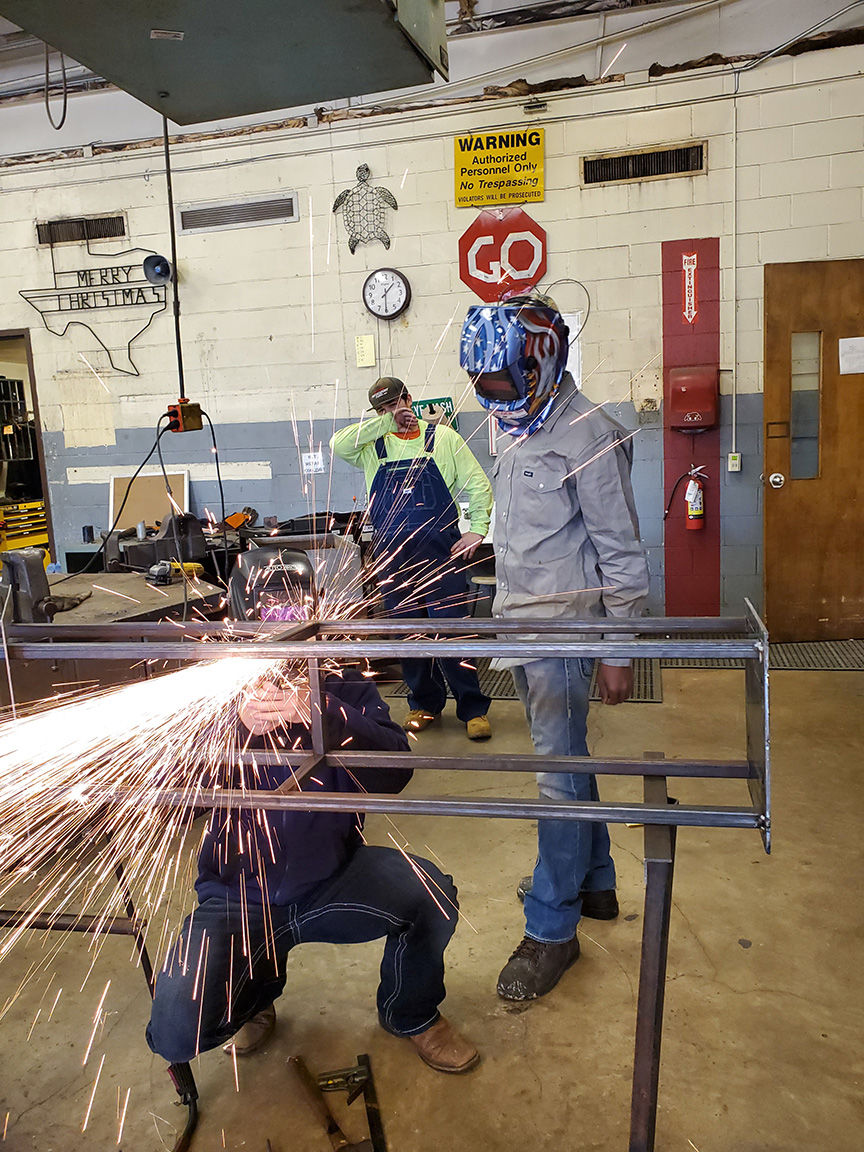 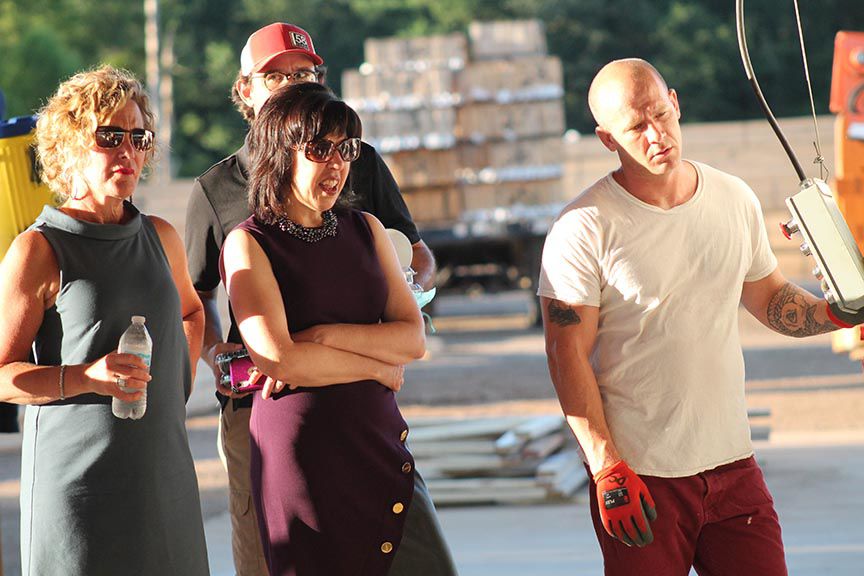 Anne Hazlett, center, the senior adviser for rural affairs with the White House Office of National Drug Control Policy, took a special tour of Isaiah 58 Farms in Horton on Monday with officials from Wiseman Ministries, the organization that runs the Panola County addiction recovery program. 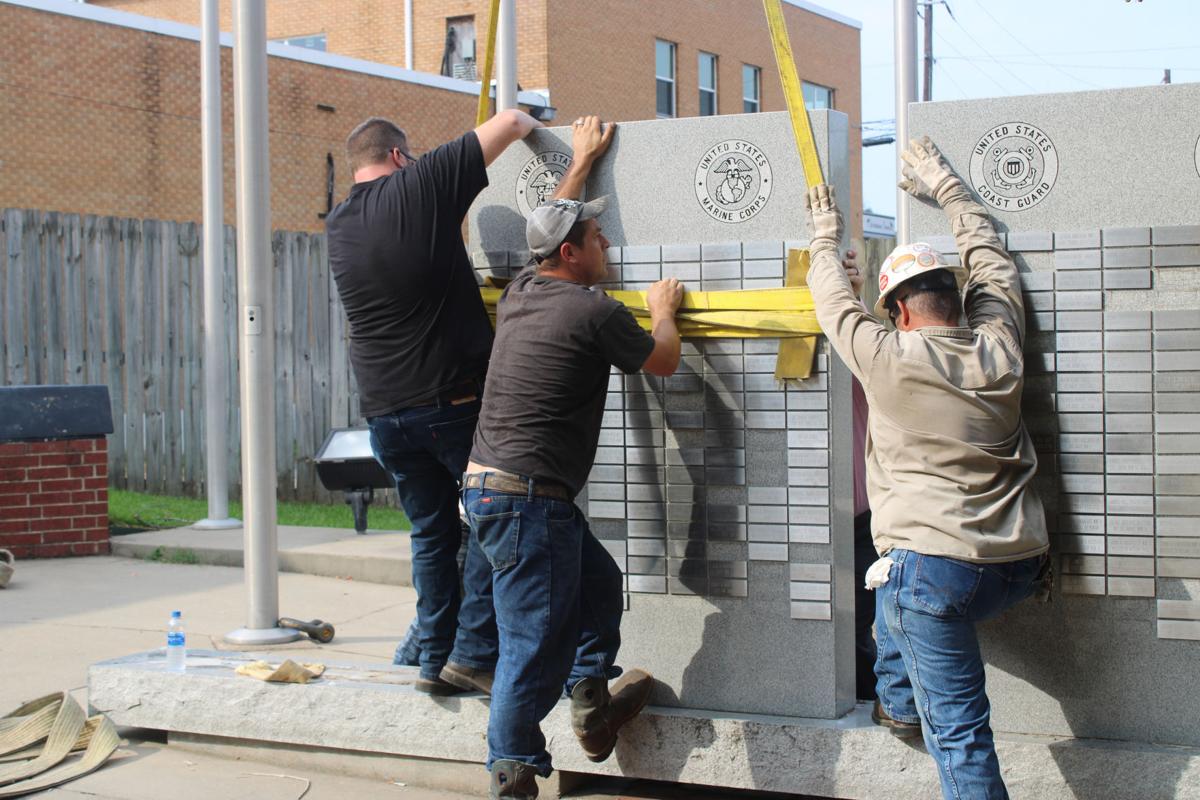 A crew worked on repairs to the Panola County Memorial Wall by the Old Jail in early October. 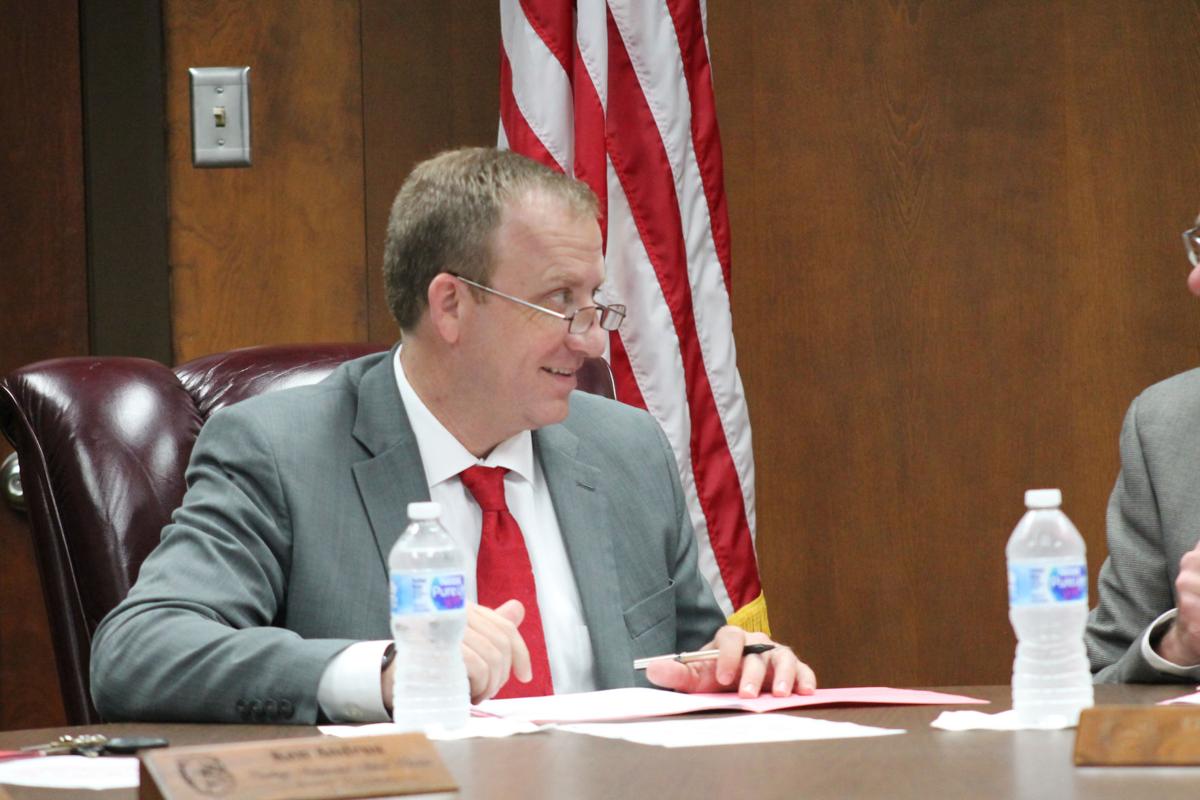 New Carthage ISD Superintendent John Wink was officially hired by the Carthage ISD Board of Trustees on Monday, Jan. 7, 2019. 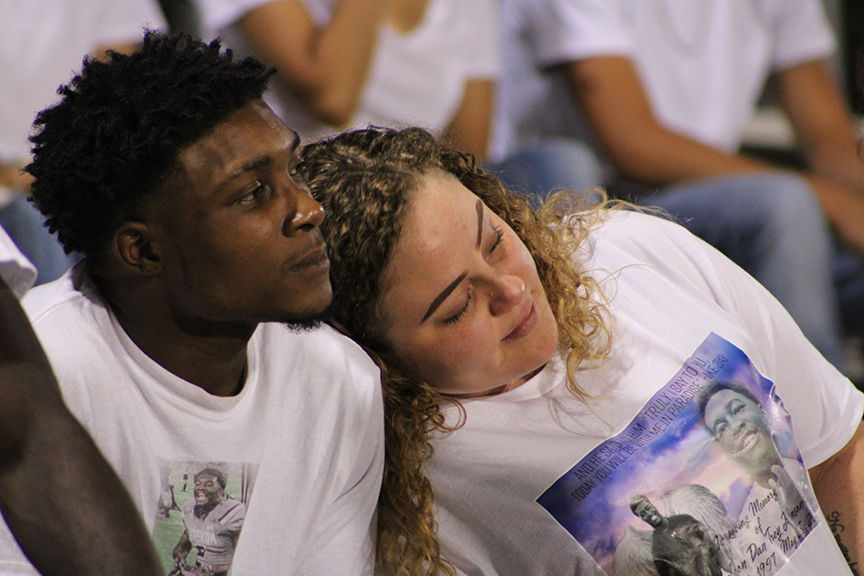 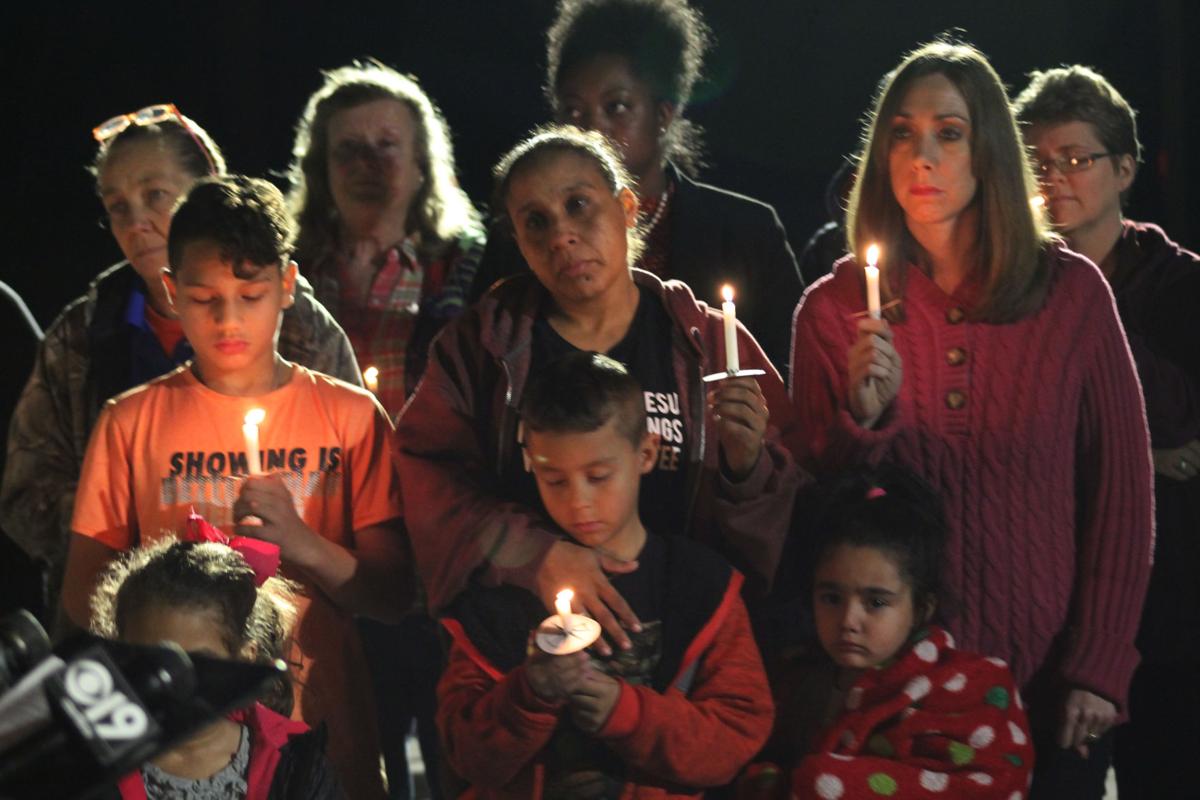 Members of Faith Assembly of God and other Panola County residents pray for Lauren Thompson, a Panola County woman who has been missing for a week, at a candlelight vigil at the Footprints in the Sand Monument on Thursday, Feb. 17.

Anne Hazlett, center, the senior adviser for rural affairs with the White House Office of National Drug Control Policy, took a special tour of Isaiah 58 Farms in Horton on Monday with officials from Wiseman Ministries, the organization that runs the Panola County addiction recovery program.

A crew worked on repairs to the Panola County Memorial Wall by the Old Jail in early October.

New Carthage ISD Superintendent John Wink was officially hired by the Carthage ISD Board of Trustees on Monday, Jan. 7, 2019.

Members of Faith Assembly of God and other Panola County residents pray for Lauren Thompson, a Panola County woman who has been missing for a week, at a candlelight vigil at the Footprints in the Sand Monument on Thursday, Feb. 17.

A lot happened in 2019 in Carthage and Panola County. Here’s a look back at some of the biggest stories of the year, broken down into areas and topics.

The city also finished two major parks projects: a splash pad at Davis Park and a walking trail at the ballpark. A groundbreaking for the splash pad took place in June, and city officials are still planning one for the walking trail.

It was a bad year for the historic entrance gate at Davis Park. The structure was hit and the gate knocked down three times by tractor-trailers driving illegally on city streets. Welding students at Carthage High School took the original signage and spend the fall semester creating a new, smaller gate for the splash pad entrance. The replacement gate for the original entrance that was knocked down still hasn’t been put up again.

A Carthage nursing was put it on a list of facilities with a “persistant record of poor care” as of April. Briarcliff Skilled Nursing and Rehabilitation was one of 400 facilities included in a list of the most recent Special Focus Facilities and candidates for the SFF program included in a U.S. Senate report issued by Sen. Bob Casey, D-PA, and Sen. Pat Toomey, R-PA, in June.

Officials with the Panola County Fresh Water Supply District No. 1 approved a $1.03 million, three-to-five-year plan to repair the Lake Murvaul Dam in February, but were still debating the costs and engineering plan at their December meeting. Board members will continue to consider how to fund the repairs as 2020 gets underway.

Lake Murvual officials also took steps to prevent drowning deaths after a Garrison teen, Brandon Tenison, died in June while swimming at the marina. Those steps included a drowning prevention class and looking at ways they could build floating rigging for struggling swimmers to grab ahold of in crisis.

Meanwhile in March, the FCC granted a petition to add Tyler and Longview TV news stations to Panola County satellite TV channel line-ups. In a 15-page ruling handing down March 6, the FCC wrote “We are persuaded by the overall strength of the evidence that a sufficient market nexus exists between the (Texas) stations and Panola County.” Panola County also recorded two tornadoes this year: an EF-1 that hit Bethany in May and an EF-0 that hit Beckville in October. No one was hurt in either storm.

Isaiah 58 Farms, in Horton, hosted White House advisor Anne Hazlett in July to help her learn about their ministry.

“A lot of times, people that are struggling with addiction are like many of the rest of us who might have pieces in our lives that we need to learn to live in a new way,” Hazlett said, “and the faith-based path often, I think, looks at somebody as a whole person, and not just what they’re struggling with from a behavioral standpoint but what are some of those other pieces.”

A planned expansion of Texas 315 was put on the state’s 10-year transportation plan. The section of road, between Carthage and Clayton, will be expanded to a four lane road with a center turning lane and a shoulder according to Marcus Sandifer, Texas Department of Transportation Public Information Officer.

And a new Text-to-911 service debuted in Panola County in September. The service allows a person to send a text message directly to 911 for help in the event they are unable to make a voice call.

Veterans Day in 2019 included two major events: a re-dedication of the Memorial Wall after repairs and the opening of an expanded military exhibit at the Old Jail Museum. The exhibit seeks to showcase Panola County’s involvement in wars throughout U.S. history. It also gives a home to those personal and family military items that local residents have donated.

A federal Title IX lawsuit accusing Carthage ISD of failing to stop the spread of a nude video of a female student was dismissed in March. U.S. District Judge Rodney Gilstrap said in a March 6 order for summary judgment the facts presented by both Carthage ISD and the family show the district acted as it could with the knowledge it had. “Without evidence of CISD’s actual knowledge of the allegedly continuous harassment, there exists no facts by which CISD could have drawn an inference that a substantial risk of serious harm to (the girl) existed.”

A community “Book Blessings” drive in April collected more than 2,000 books that were handed out for free to Carthage Primary School students.

Longtime Carthage High School teacher Bud Worley was tapped to replace Bob Browning as superintendent of the Panola Charter Schools system in May. Worley had previously served on that district’s school board.

Panola College tore down its Rhea Fine Arts building in 2019 and debuted plans for a new music building on the site. College President Greg Powell said officials anticipate coming back to the college’s board in March or April 2020 with a guaranteed maximum price for the project and more design plans. The college also received a $206,323 grant from the Texas Workforce Commission to help expand its dual-credit certified nurse aide program to area high schools and opened a new food pantry for students in need.

Elysian Fields ISD parents took to their school board in October to address concerns of bullying after the death of a middle-schooler. Following the comments, Superintendent Maynard Chapman said the concern of the parents is understood and the district is addressing bullying across the campus.

The Panola County District Attorney’s Office saw several changes, the first being the hiring of longtime Carthage attorney Ric McPherson as a second assistant district attorney in April. McPherson was tapped to help clear a backlog of cases.

Assistant District Attorney Katie Nielsen was fired in October after a finding of prosecutorial misconduct led to a mistrial in a sexual assault case. Nielsen is accused of failing to properly investigate the criminal histories of two main witnesses for the prosecution — and telling court officials she had done so during at least three separate court appearances, according to court records.

Panola County also saw its share of tragedy in 2019.

Lauren Thompson, a 33-year-old mother, disappeared after calling 911 from the woods in Rock Hill in January. The Panola County Sheriff’s Office and numerous other area law enforcement agencies conducted searches throughout the months following, but she remains missing today.

Keileon Johnson, 22, of Waskom was fatally shot in May. Tramaine Eugene Butler, 20, of DeBerry was arrested in connection with the homicide.

Jakebrian Jones, 30, of Carthage was shot and killed on MLK Boulevard in Carthage in August. No arrest has been made in the case.

A Carthage man, Jeffrey Mickens, was sentenced to prison for the fatal shooting of Elania Johnson, the shooting of Raven Dotrey and the kidnapping of Dotrey’s daughter in July. 123rd District Judge LeAnn Rafferty gave Mickens 80 years in prison on each of the first-degree felony charges of murder, attempted capital murder of a peace officer and two counts of aggravated kidnapping he faced. She also sentenced him to 20 years on a second-degree felony charge of aggravated assault with a deadly weapon.

The Carthage Police Department scored a big drug bust in April, finding 86 pounds of marijuana inside a Louisiana man’s car.

The 86th Texas Legislature met over the spring months, and Panola County’s elected officials spend a lot of that time trying to get bills passed.

State Rep. Chris Paddie, R-Marshall, was named the Rural Jobs Coalition’s “Legislator of the Year” for a bill he authored that looked to establish a rural economic development fund to loan or invest in small businesses.

Paddie’s and other House officials’ top goals going into the session were property tax reform and school finance reform — which passed in both chambers.

“I’m happy to say we left this session checking the boxes on all the major things we said, the most significant and potentially most transformational (being) school finance reform,” Paddie said after the session ended.

Paddie’s legislative session also included a powerline safety bill to require utility companies that own or operate transmission lines to train employees to recognize safety problems; adding alcoholic beverages to restaurant delivery services; and, as part of his work on the sunset committee, a change in the state plumbing code that would have ended plumbers’ licensing and regulation (Gov. Greg Abbott extended the licensing law through 2021 through an executive order).

State Sen. Bryan Hughes, R-Mineola, authored an election security bill that, among other things, increased existing penalties for ballot abuse from a misdemeanor to a state jail felony. It also required polls to be placed in proportion to a commissioner precinct’s number of registered voters. Hughes sponsored a companion bill to Paddie’s powerline safety bill and a bill from State Rep. Matt Krause, R-Fort Worth, that would have prevented the government from taking “adverse action” against individuals for acting in accordance with their own “sincerely held religious belief or moral conviction, including beliefs or convictions regarding marriage.”

After the session, Hughes said he was pleased officials accomplished major goals, but he also noted losses in the Republican-held majority.

Both Paddie and Hughes were named to the House and Senate redistricting committees. Hughes was also tapped to lead the Senate Administration Committee and the Senate State Affairs Committee.