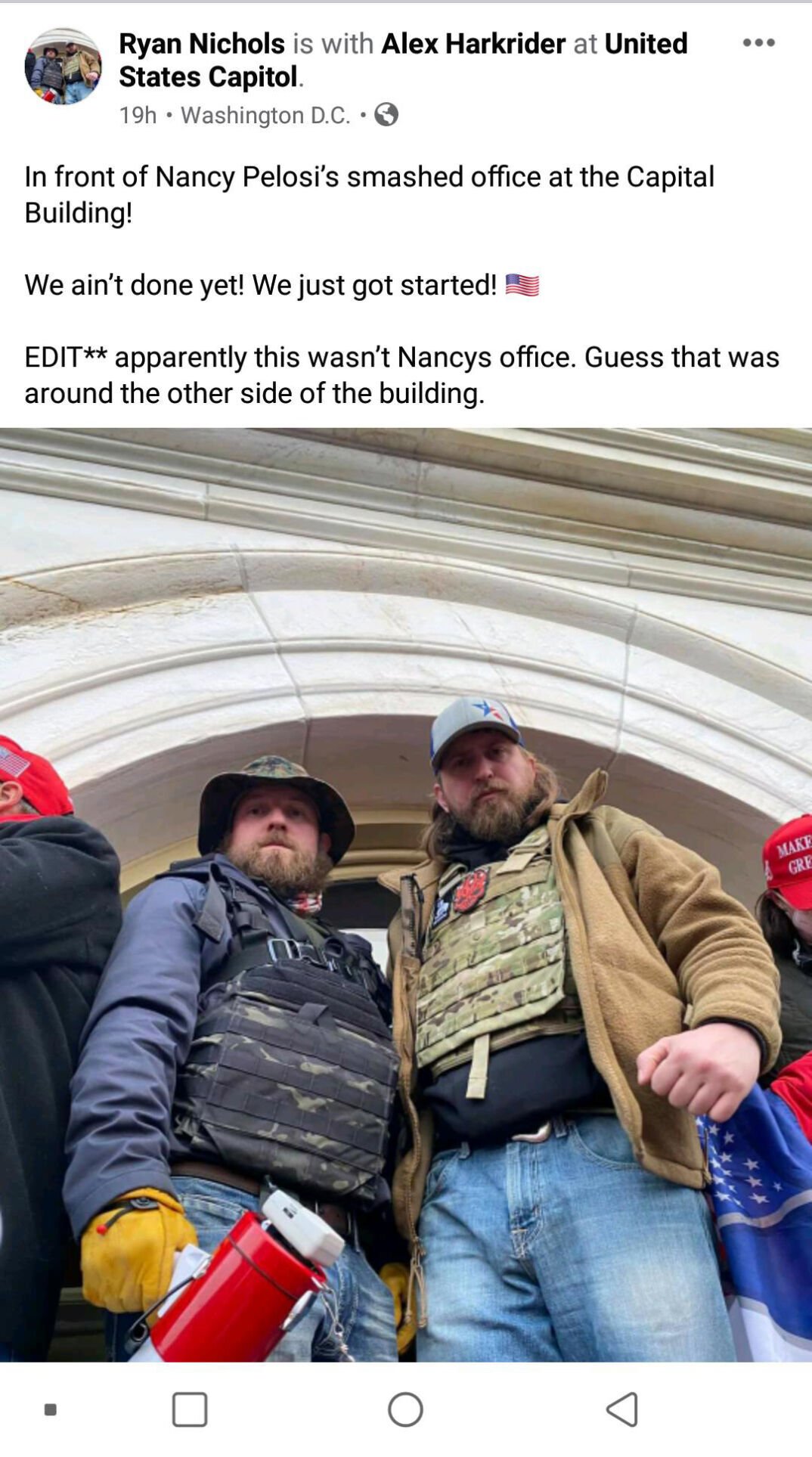 Ryan Nichols, left, and Alex Harkrider are seen Jan. 6 outside the Capitol in Washington, D.C. The two men have been arrested in connection with the Capitol riot. 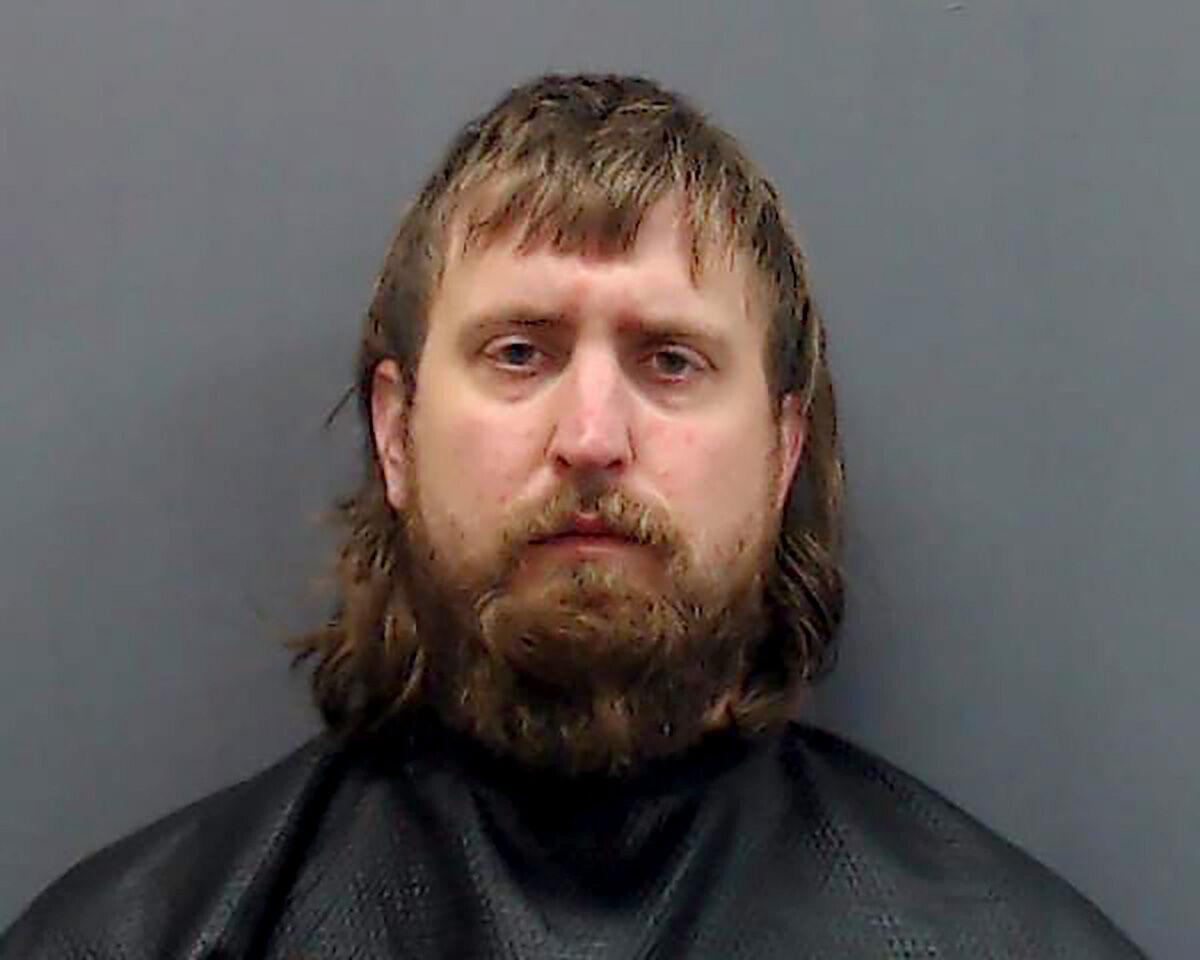 A Carthage man facing charges in connection with the Jan. 6 U.S. Capitol riot still poses a danger to the community and should not have his pretrial release conditions modified, federal prosecutors said last Thursday.

Alex Harkrider, 34, is seeking to have an ankle monitor removed as part of his bond conditions. Harkrider’s attorney filed a motion for the change in June with the U.S. District Court for the District of Columbia, saying the $110 a month cost was a “financial, emotional and physical hardship” for Harkrider.

Harkrider, they argue, is facing serious charges and stands accused of traveling to Washington, D.C. with guns, a ballistic vest and a Tomahawk axe “in a misguided effort to obstruct the historically peaceful transition of power and overthrow the government.”

“While he was ultimately unsuccessful, his actions on January 6, 2021 were appallingly dangerous,” prosecutors wrote. “He forced his way into the United States Capitol, armed with a weapon and prepared for a violent confrontation.”

Harkrider has been indicted along with Ryan Nichols, 30, of Longview on charges that they participated in the U.S. Capitol riot. Judge Thomas F. Hogan granted Harkrider pretrial release in April, putting him on house arrest with electronic monitoring. No such release has been given to Nichols.

Harkrider is charged with civil disorder, obstruction of an official proceeding, theft of government property, entering and remaining in a restricted building or grounds with a deadly or dangerous weapon, disorderly and disruptive conduct in a restricted building with a deadly or dangerous weapon, unlawful possession of a dangerous weapon on capitol grounds or buildings, disorderly conduct in a capitol building, and parading, demonstrating or picketing in a capitol building.

Kira Anne West, Harkrider’s attorney, argued in June that the court should not have reservations about Harkrider not following his bond conditions, saying Harkrider has been compliant with his pretrial officer and that the officer can monitor Harkrider’s compliance without electronic monitoring.

“Now, nearly two months later, this court should no longer have any reservations about Mr. Harkrider’s ability to follow the orders of the court or any other government agency,” West wrote. “Mr. Harkrider has a perfect record of compliance with pretrial.”

Harkrider is on location monitoring-radio frequency, which records when he leaves and enters the house, but Harkrider’s every movement is not tracked, prosecutors noted. They said Harkrider’s compliance with his bond conditions means it is working.

Prosecutors said they also believed that former President Donald Trump’s continued false election claims, his insinuation that he would be reinstalled as president and his downplaying of the Capitol Riot are another reason to keep Harkrider’s ankle monitor because Harkrider’s actions stemmed from the apparent belief in Trump’s claims that the Nov. 3, 2020 election was fraudulent.

“There is no evidence that the defendant has changed his views or beliefs, nor are there any changed circumstances since the last hearing on April 26, 2021,” they wrote.

In the motion, Alex Harkrider's attorney says the ankle monitor and its $110 per-month charge "is a financial, emotional and physical hardship."

A Carthage man held on charges for participation in the U.S. Capitol insurrection has been r…

Newly released text messages between two East Texas men charged in the Jan. 6 riots at the U.S. Capitol show the pair were preparing for a “war zone.”