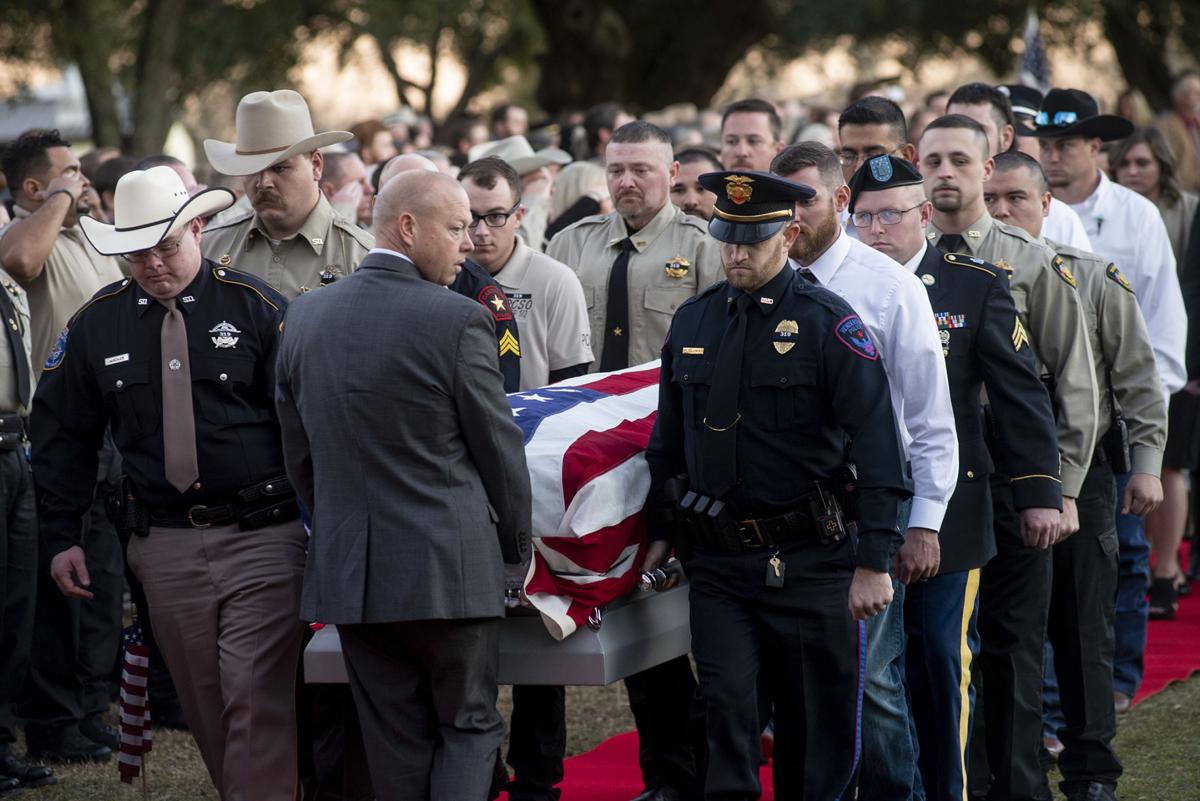 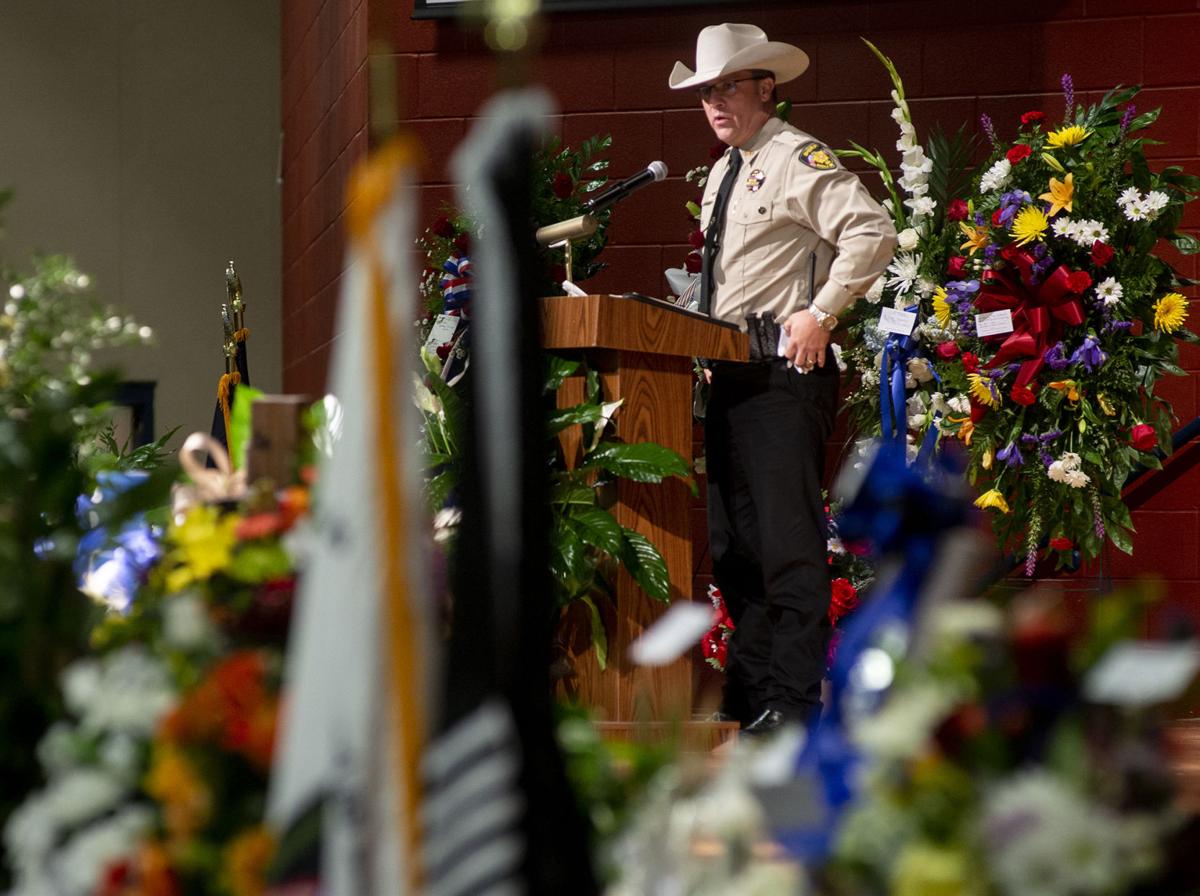 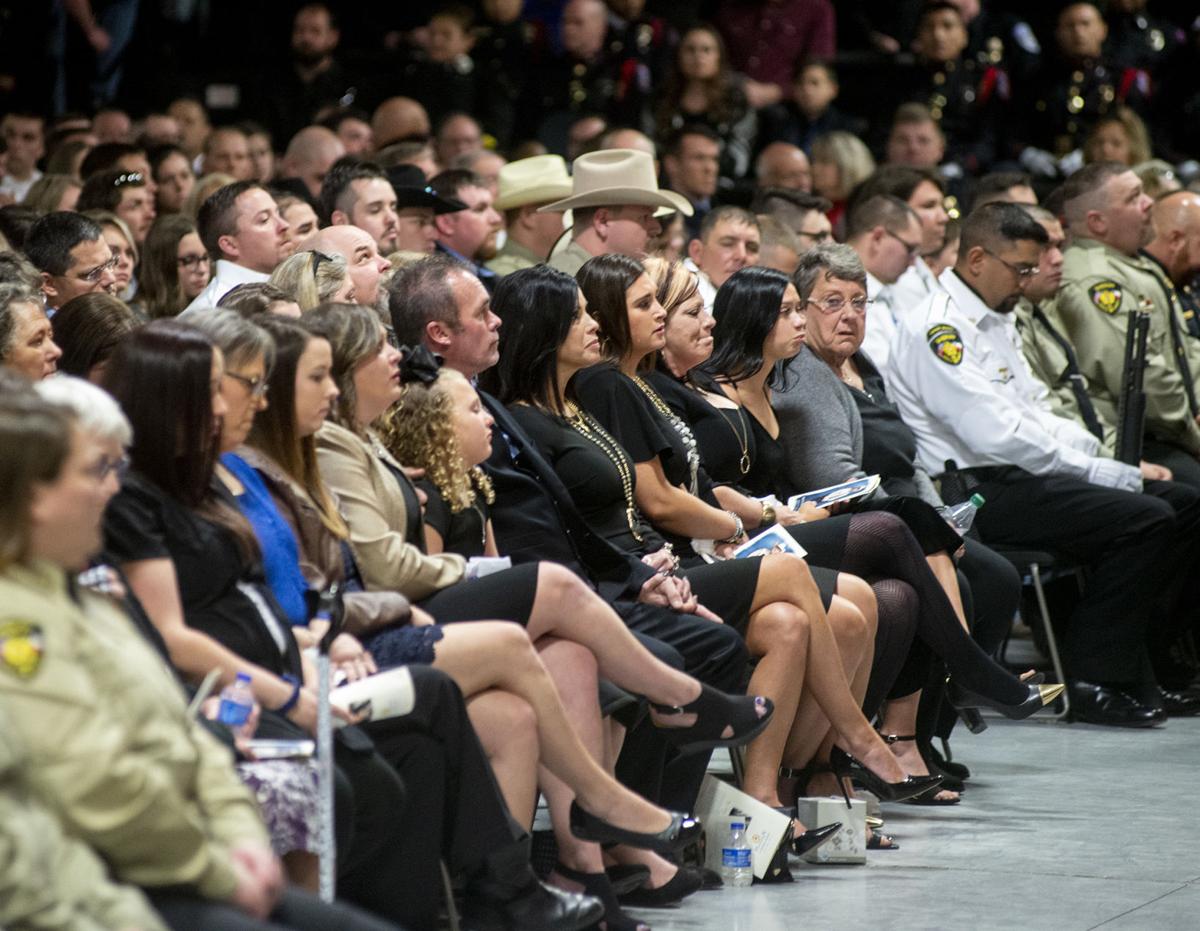 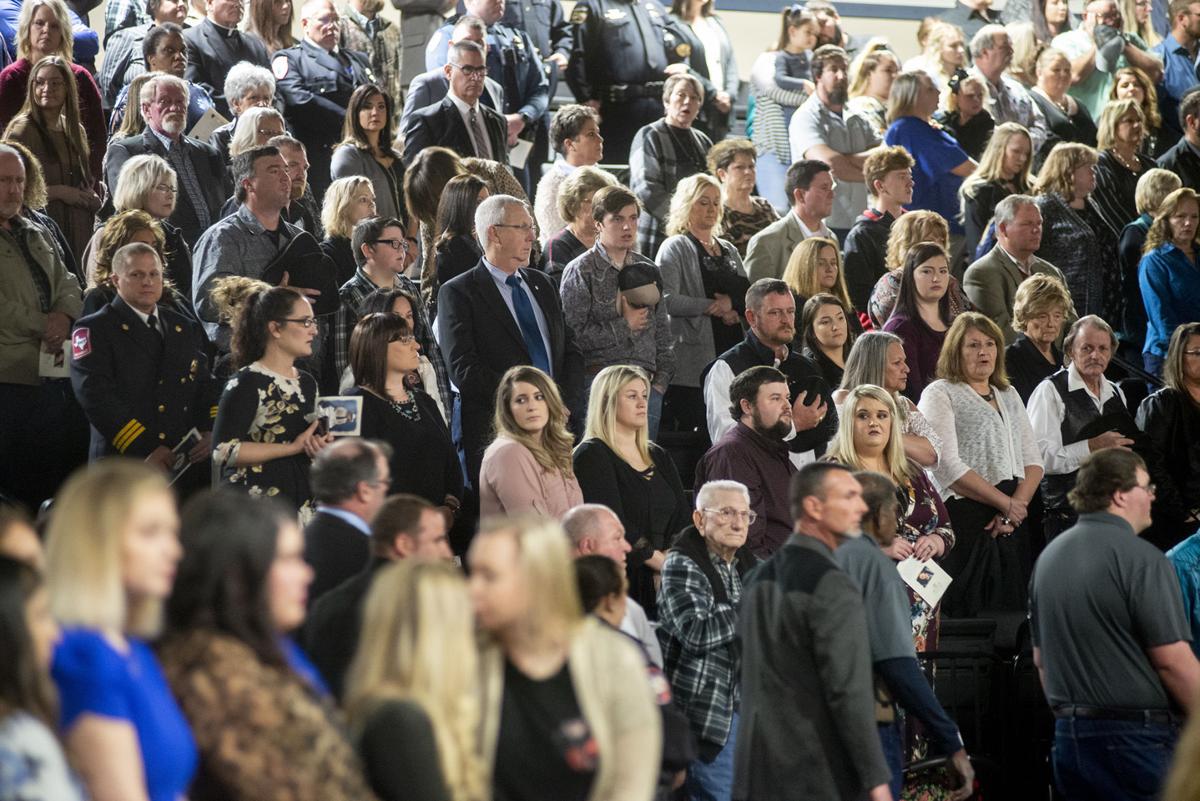 Deputy Cutter Clinton had a lot of words to say about his friend Chris Dickerson, the late Panola County deputy who was shot and killed in the line of duty this week.

But it all boiled down to this: He was a hero.

“He touched so many lives during his time on Earth,” Clinton said. “He was the best. All that knew him or that had any dealings with him were better for it. He was a hero. He is a hero.”

Dickerson, a 2009 graduate of Carthage High School, had worked with the Panola County Sheriff’s Office for eight years. Before that, he served in the Texas Army National Guard. He is survived by his wife Krista and their daughters Kensley and Chelsey.

Thousands came Saturday afternoon to the Carthage Civic Center for his funeral. The stream of those grieving kept filing in to the main auditorium past the start of the service, filling up every available seat and standing in the wings. Those grieving included Carthage and Panola County residents who knew Dickerson personally, as well as law enforcement officers from surrounding counties and the nation. Their badges placed them all over the map: Longview, Waco, Odessa, Shreveport, Boston, New York City.

Dickerson’s casket was draped with an American flag, and his fellow Panola County Honor Guard colleagues stood watch over his body before the ceremony. It was the continuation of a nonstop vigil local police and firefighters held since the night Dickerson’s body was brought home, rotating shifts of two people to make sure he was never left alone.

And when the family and Dickerson’s first responder colleagues entered the Civic Center on Saturday, a thunderous echo could be heard in the room as the entire auditorium rose to stand and honor them.

Those who spoke Saturday remembered Dickerson as a goofball, a loving family man, a dedicated officer.

Clinton, who called Dickerson both a brother in law enforcement and “my honest-to-goodness genuine friend,” recalled how Dickerson earned the nickname “Tricky Dick” while they were both playing football at Carthage High School.

“Chris was always that perfect balance of light-heartedness and commitment,” Clinton said. “He was such a goofball, but unwavingly dedicated.”

After Dickerson’s military career ended, he joined the sheriff’s office. Clinton worked with him at the Panola County Detention Center, recalling how he would come in early to work to relieve Dickerson so they could visit and talk — and how Dickerson would stay a bit later at work to do the same.

Dickerson more than once made what Clinton described as harrowing efforts to save the lives of those he managed at the jail, but Clinton said he also found time for practical jokes on his colleagues. He worked at least four other jobs during that time — taking shifts at a gas station, umpiring at the ballpark, working with his father in law and mowing lawns. He also stocked shelves at Wal-Mart at night, earning “Employee of the Month” several times, Clinton said. Once he joined the Carthage Fire Department, he went on every call he could.

Dickerson was a man who loved his family, Clinton said, recalling how Dickerson would go help his wife with their children in the dead of night.

“He talked of how convenient it was for him to go by and rock Chelsey to sleep all night because Krista had to wake up and teach school,” Clinton said. “... I don’t think Chris realized how good a man he was. There’s nothing convenient in that act. He was simply a good man, a loving husband and daddy.”

Sheriff Kevin Lake encouraged those in attendance to turn to God in the “very dark valley that we’re walking through.”

Dickerson, Lake said, modeled his life around what the honor and duty of his police badge symbolized. He also had big goals, Lake said, remembering a time when he asked Dickerson what he wanted his career to be at the sheriff’s office.

“So I sat there in silence for a minute and I said Chris, if you want my job, get out there and earn it,” Lake said, with a smile. “He told me, he said, ‘Don’t get too comfortable.’ He got up and left my office, and all I could do is get up and go home.”

The Panola County Sheriff’s Office is formally retiring Badge No. 319, the one carried by Dickerson, Lake announced Saturday while holding back tears.

“We retire the badge, but we’ll never forget the man,” he said.

The Rev. Rick Linebarger acknowledged during his sermon Saturday that “evil has touched our community.” But, he said, it’s important not to let that anger overpower your life. Linebarger told those gathered Saturday to remember that there comes a day when we’ll all meet the eternal judge.

“There are some people probably have more anger than they ought to have. Frustration,” Linebarger said. “One of the things mentioned the other night at the prayer vigil was the fact that we need to lean on one another, we need to pray.”

“May God help us to be a part of the faithful,” he said.

“He was everything we needed and nothing we deserved,” Clinton said.

Family, friends and colleagues gather for the funeral of Panola County Sheriff’s deputy Chris Dickerson, on Saturday January 4, 2020, at the C…