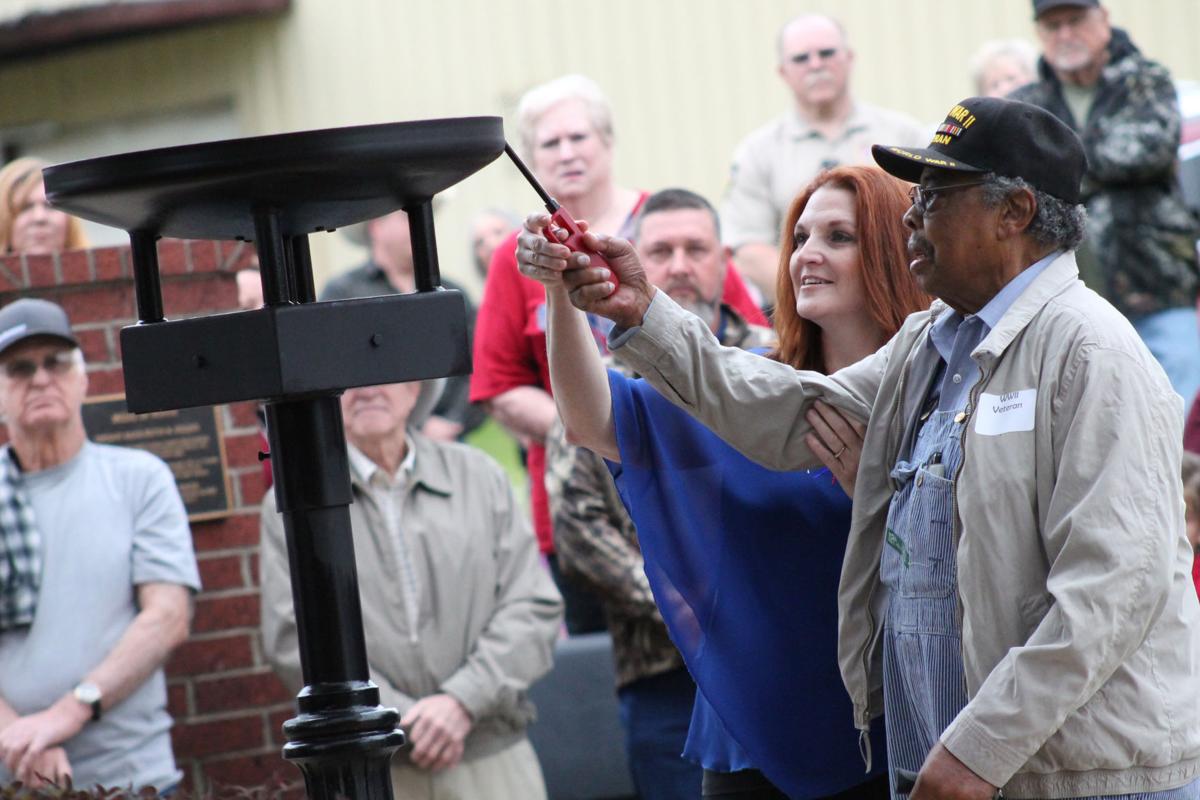 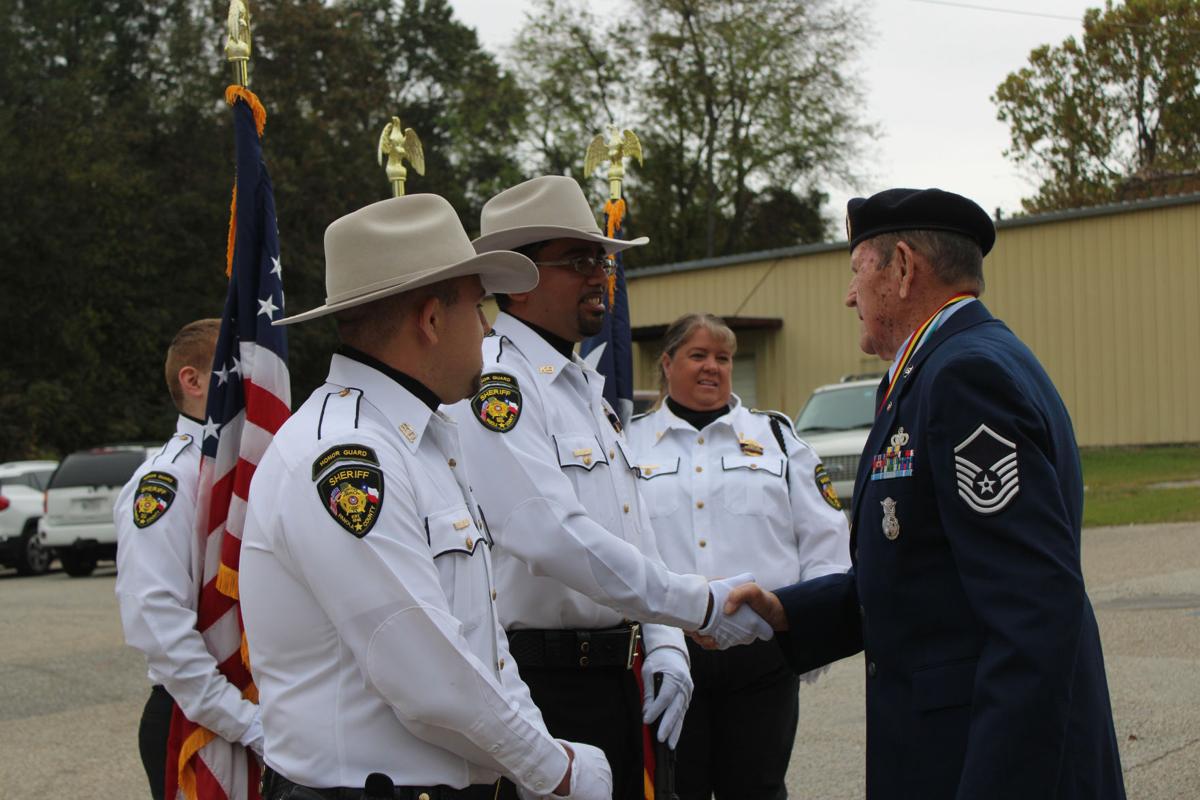 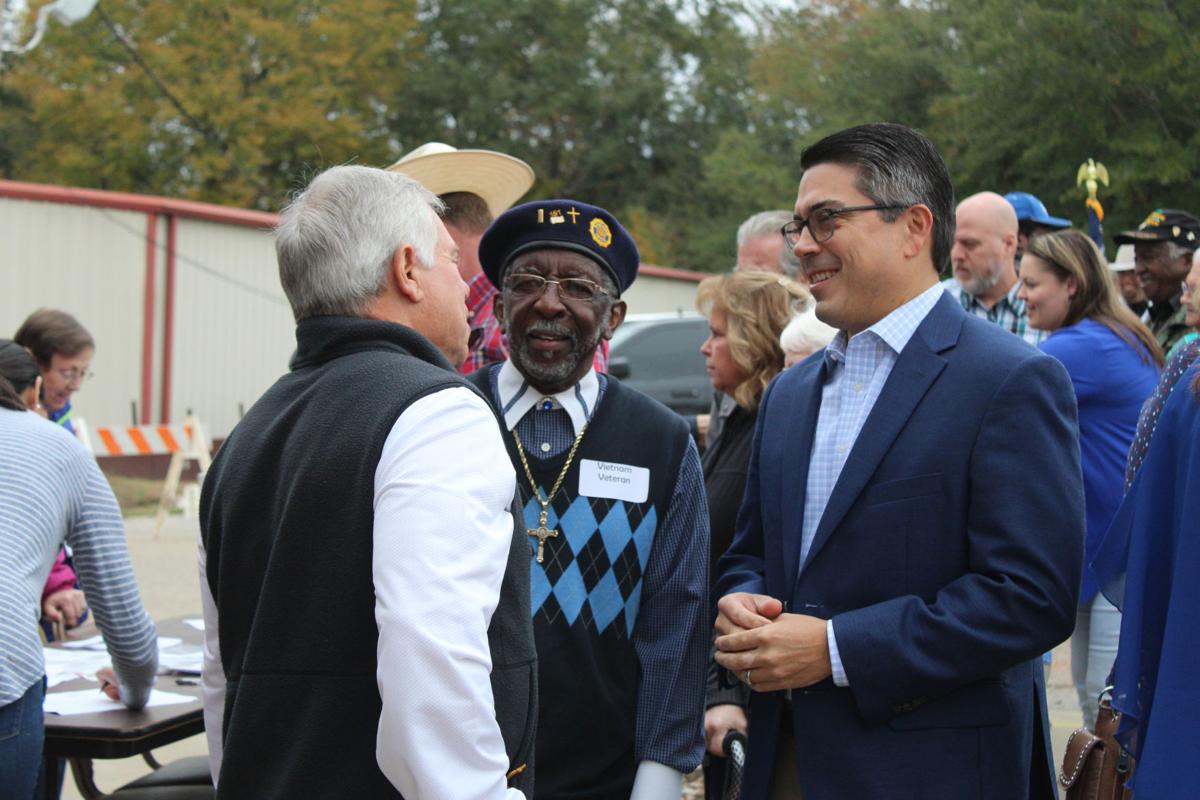 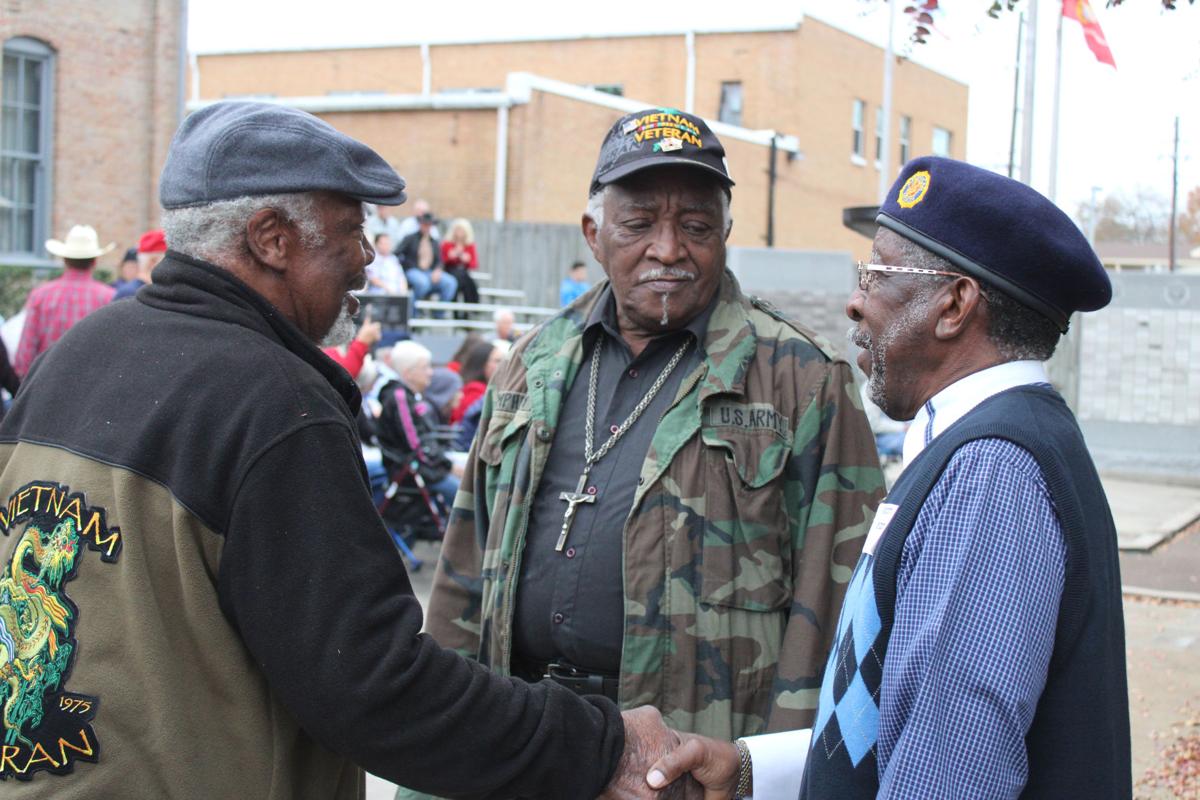 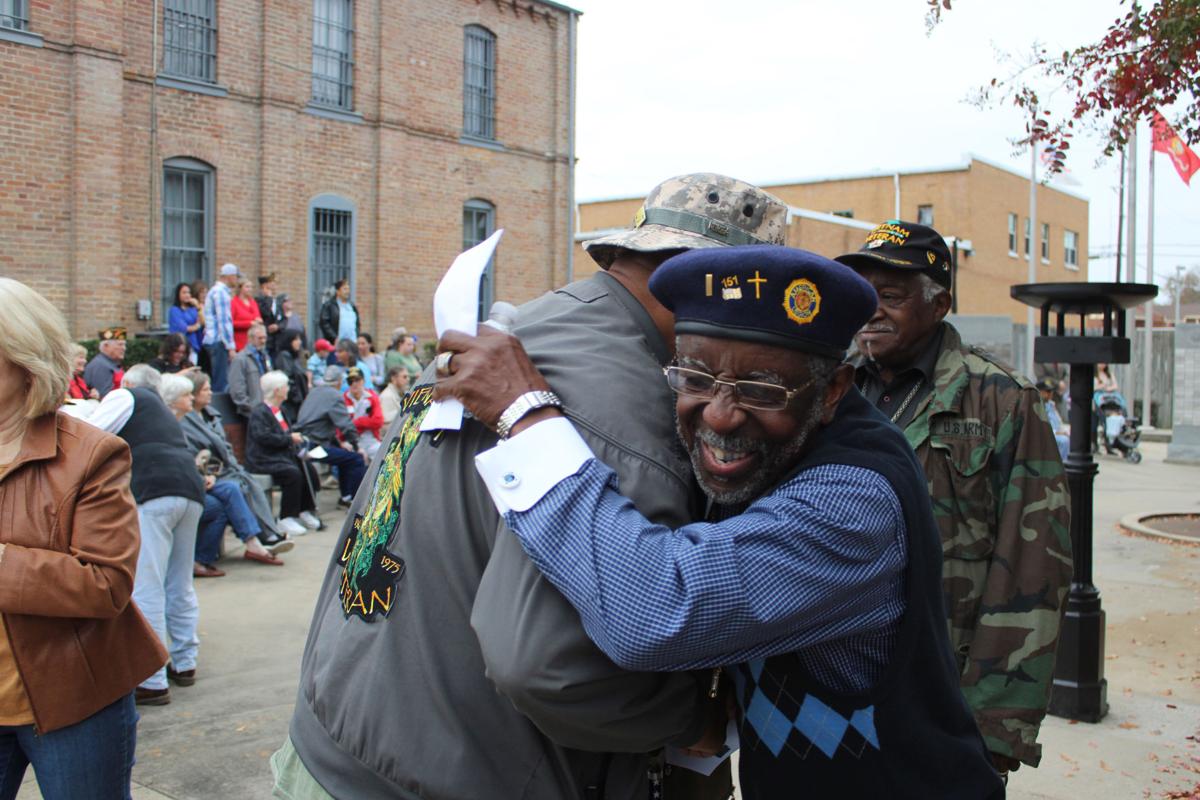 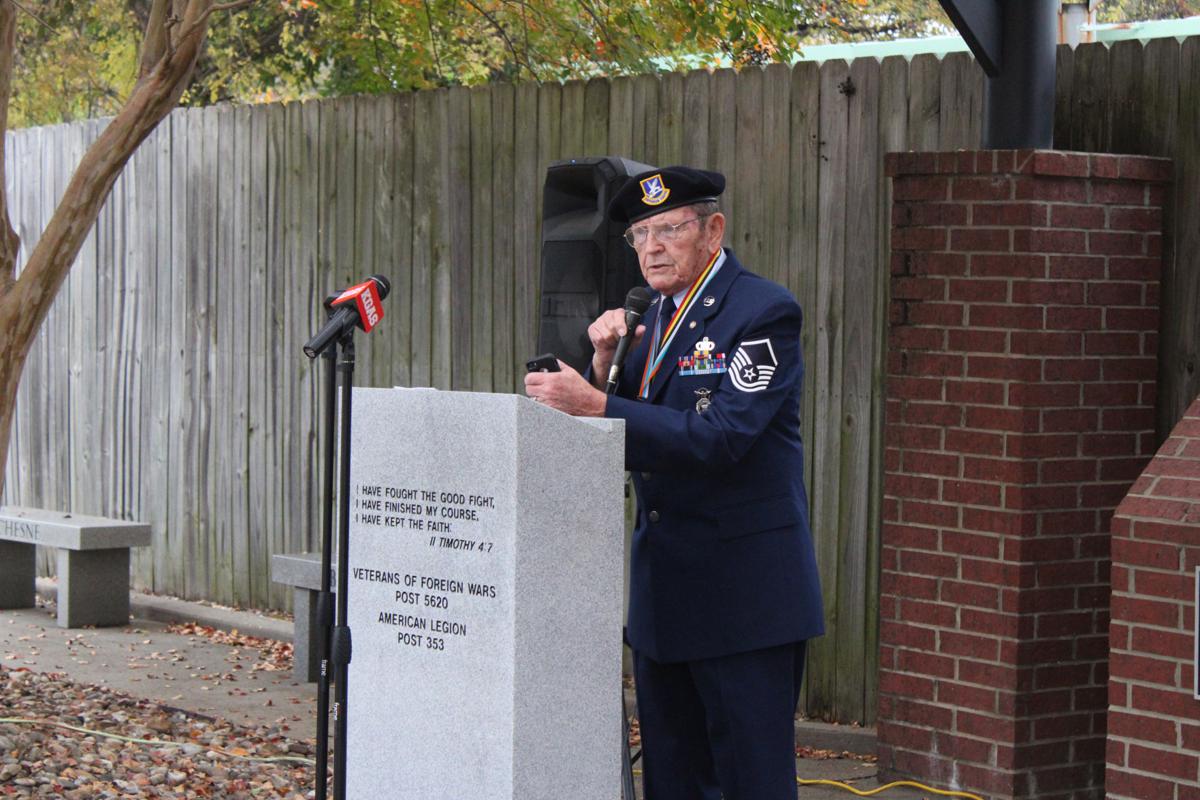 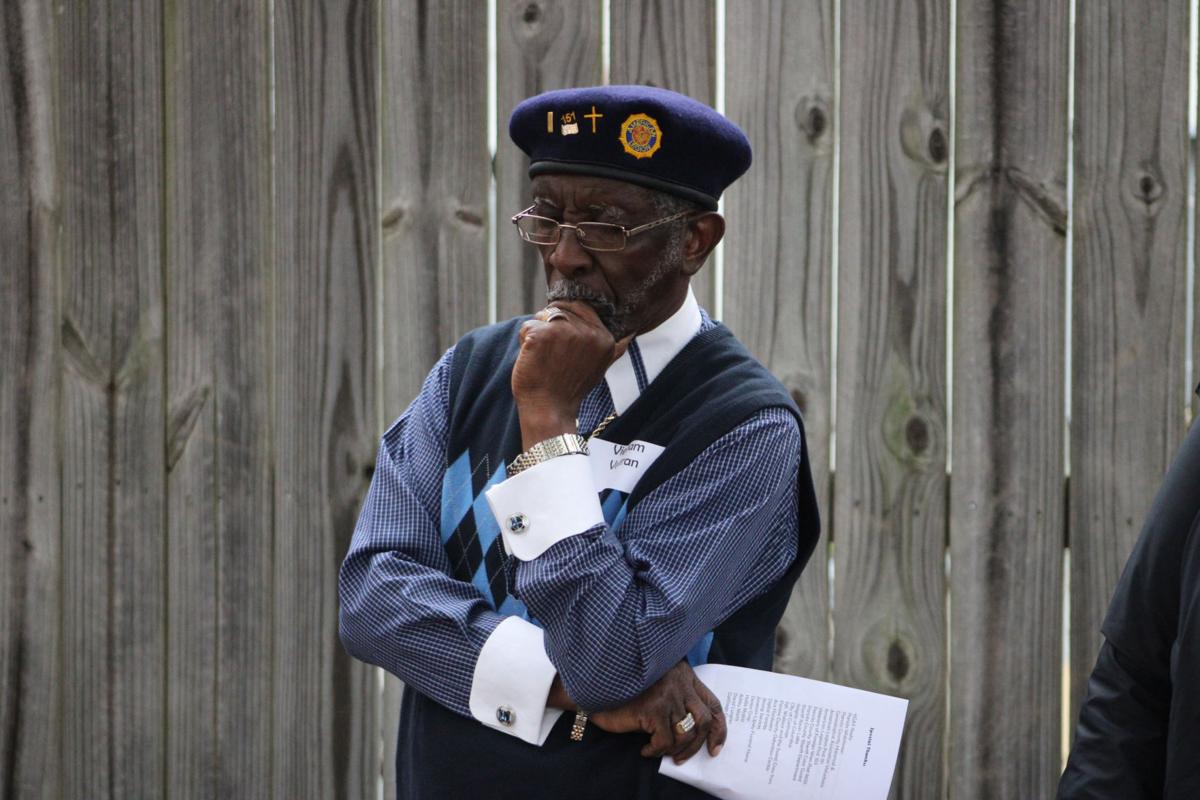 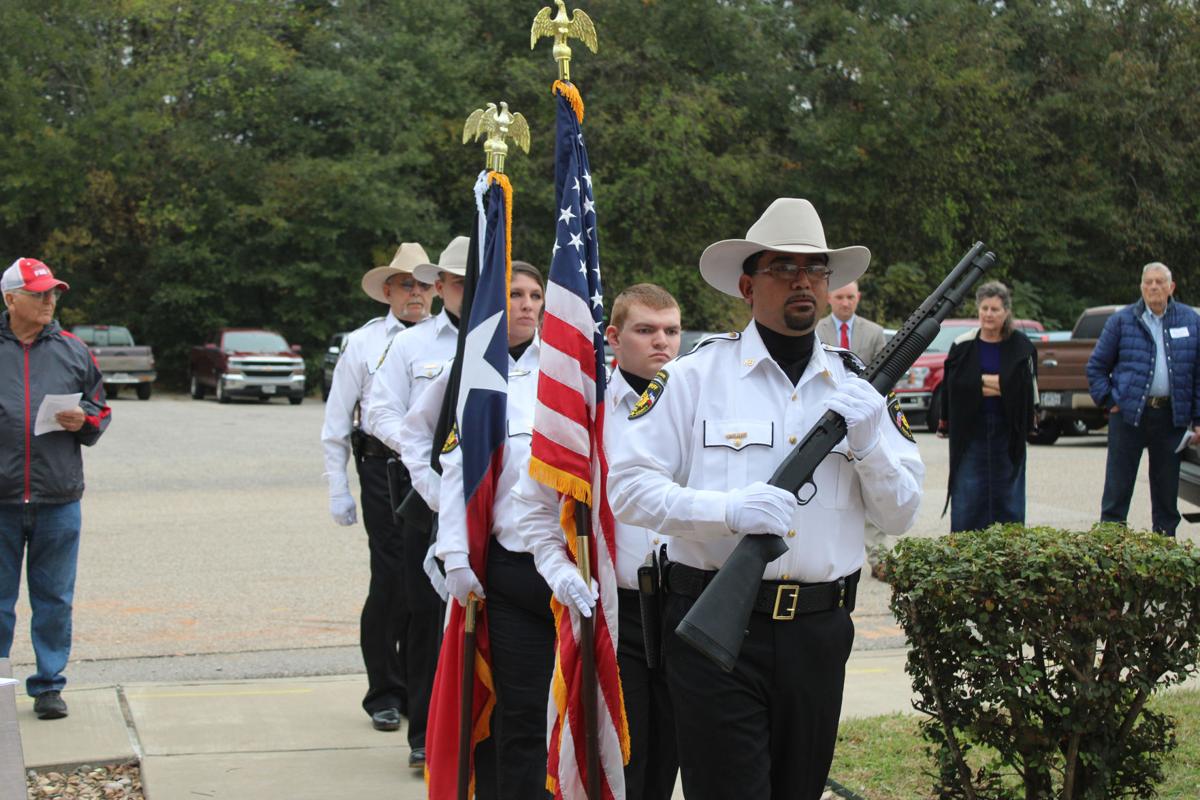 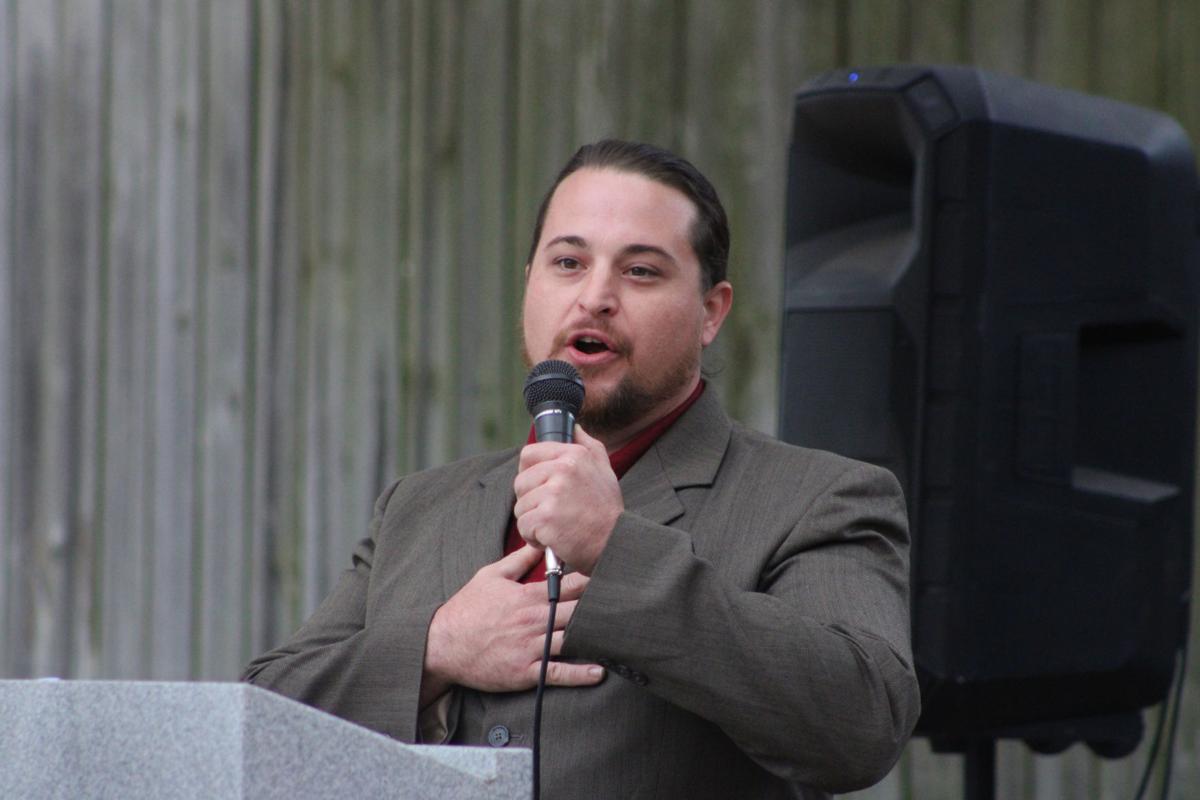 Jesse Morris leads the singing of the national anthem. 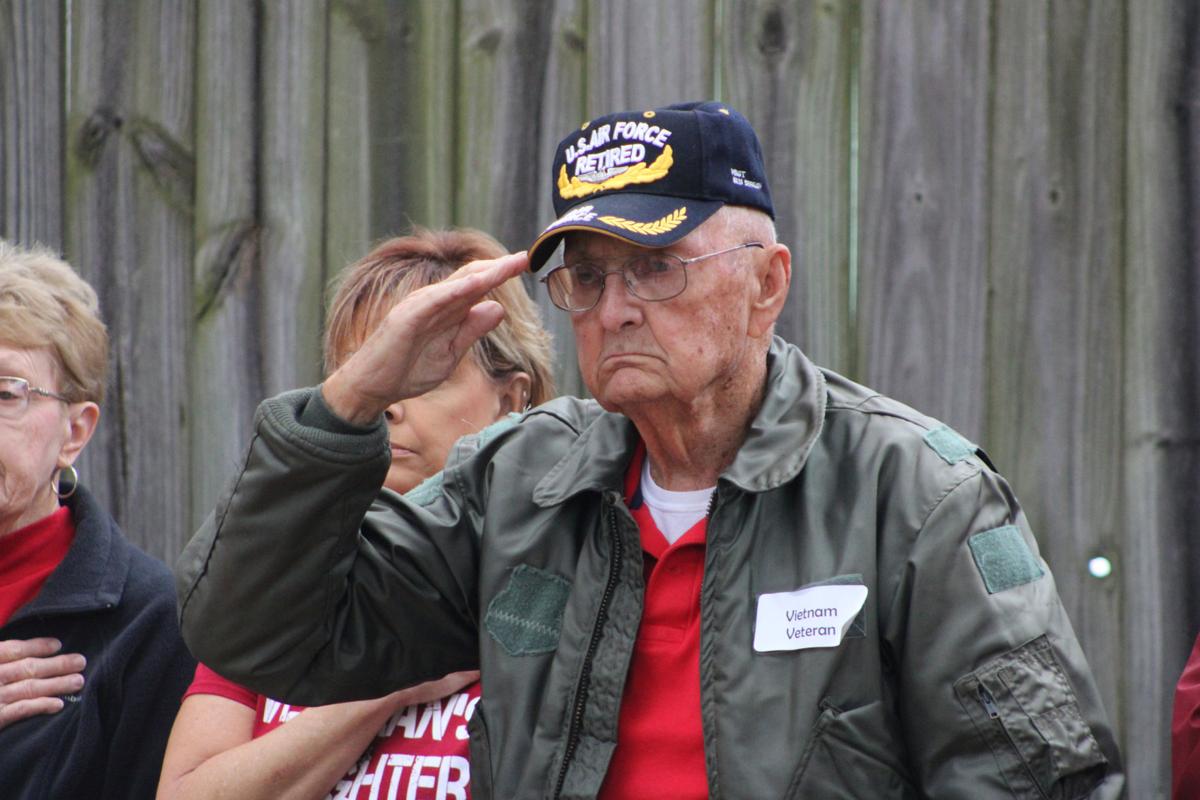 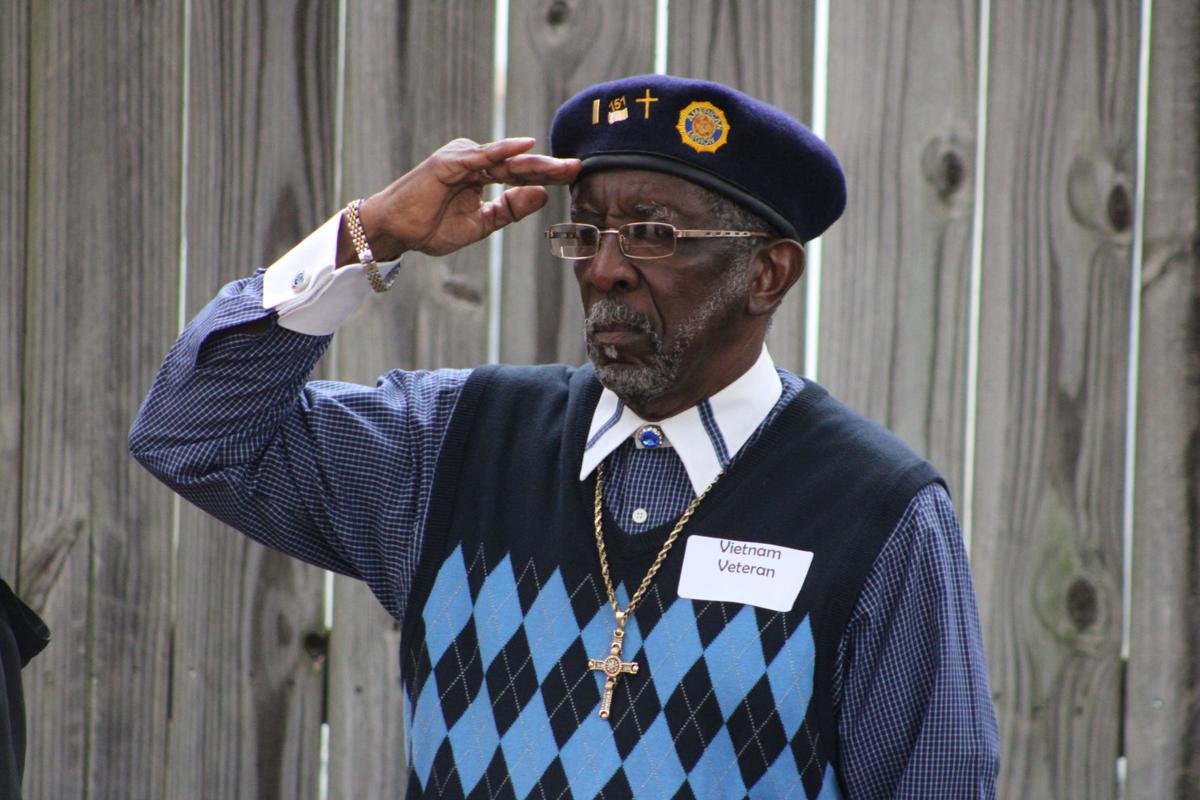 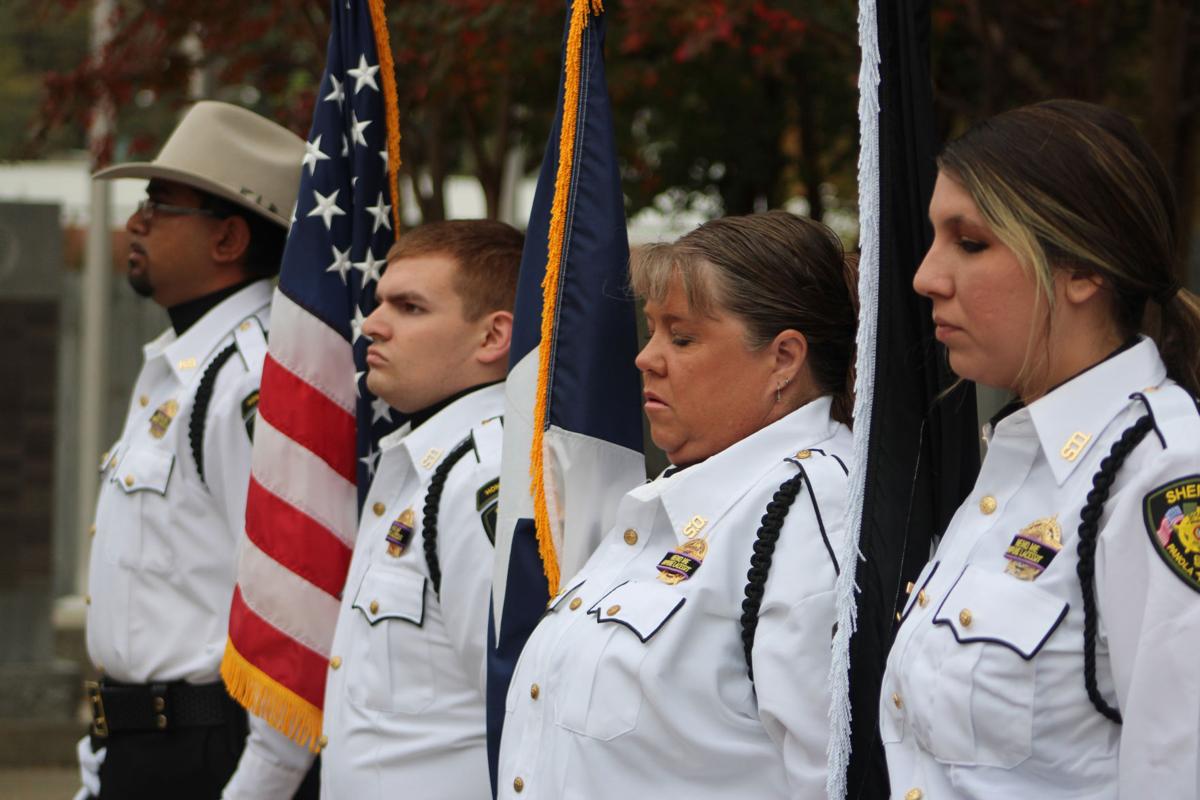 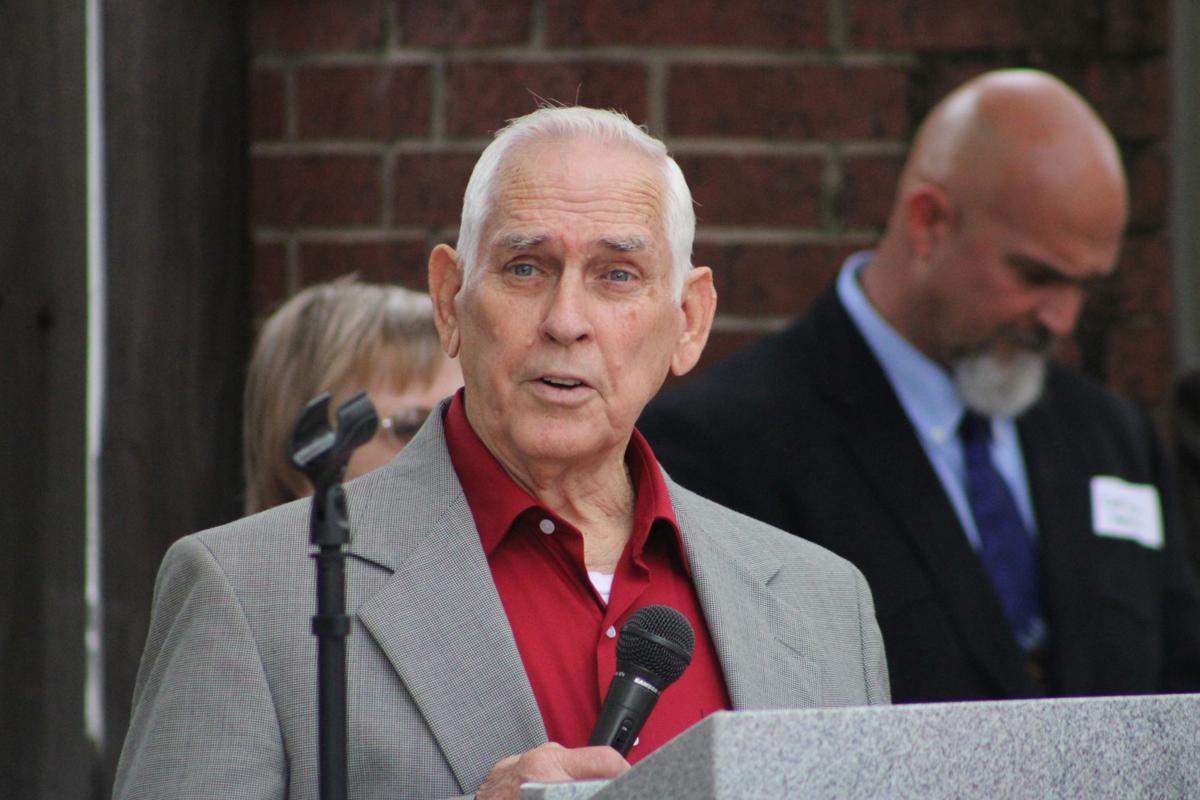 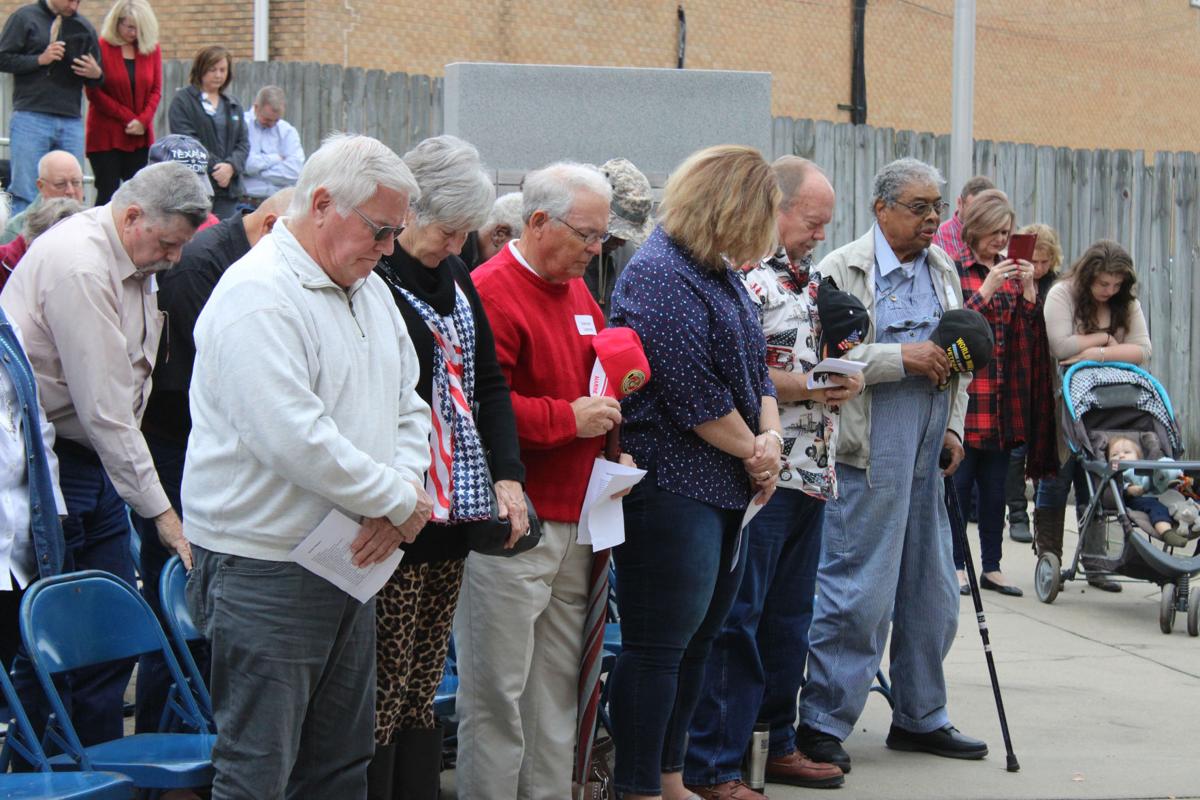 Members of the community bow their heads during the closing prayer.

Jesse Morris leads the singing of the national anthem.

Members of the community bow their heads during the closing prayer.

Members of the community gathered Monday for a Veterans Day service and the re-dedication of the Panola County Veterans Memorial Wall.

Nancy Gibbs, vice president of the Panola County Historical and Genealogical Association, welcomed veterans and guests to the ceremony to re-dedicate the wall.

“This memorial is for those have served, who are with us and who can no longer stand at attention” Gibbs said. “Freedom is not free, This memorial is here to honor all who have given us the freedom we enjoy. It is our responsibility to remember them, to respect and to support them. They serve so that we might live in a land where we have a voice and we have a choice.”

The memorial had suffered vandalism and earthquake damage. It was repaired earlier this year, with Monday’s ceremony marking its grand re-opening. The oldest veteran present at the ceremony, 96-year-old World War II veteran Robert Jones, was invited to relight the eternal flame.

The Rev. E.J. Adams, a retired U.S. Air Force veteran, mentioned the power of praying in his opening prayer.

“The prayers of the mothers and dads and families and friends have kept many heroes on the field from harm, and as I stand before you, for the parents, you have an opportunity to watch the back of these heroes that have fought by praying for them daily,” he said.

Beckville Mayor Gene Mothershed, in his remarks, emphasized the importance of military service regardless of branch.

“Whether or not your branch of service is represented here or not is beside the point,” he said. “At some point in your life you decided to protect and defend America. You gave of yourself. Some were no doubt drafted, some of you made a career. Some you went in and found that military life was not what you expected, but you served regardless. I was asked upon leaving if I would come back if asked. Unhesitatingly, I answered ‘Yes sir.’ I would like to believe that every one of you would have the same answer. Thank you for your time and service.”

Panola County Sheriff Kevin Lake said it was a privilege to live in a community so vastly represented by veterans.

“It’s a blessing to me to serve in a department that has so many veterans that represent our department, and they have served their country and their heart of service continues to serve their county, and I’m grateful for that, and I want to thank each and every one of you for your service to this country, the country that we love, the best country in the world that we have before us,” Lake said. “Despite the problems that we have in our country, I couldn’t think of living anywhere else, and it’s because of you that it’s that way.”

State Rep. Chris Paddie, R-Marshall, said he was thankful to be from a community that comes out to support veterans.

“I want to thank the folks who have prepared this wonderful monument that we have in our community that’s dedicated to supporting and recognizing those who have served us,” Paddie said. “A whole list of local heroes, some who are no longer with us, and some of you that are joining us here today, and we salute you and thank you for that. ... I’m thankful to be a part of the legislature that appreciates our veterans, and although we can always do more, I can commit to you that we will continue to find ways that we can better serve you in the many ways the you deserve to be served, and know that we have that commitment to you.”