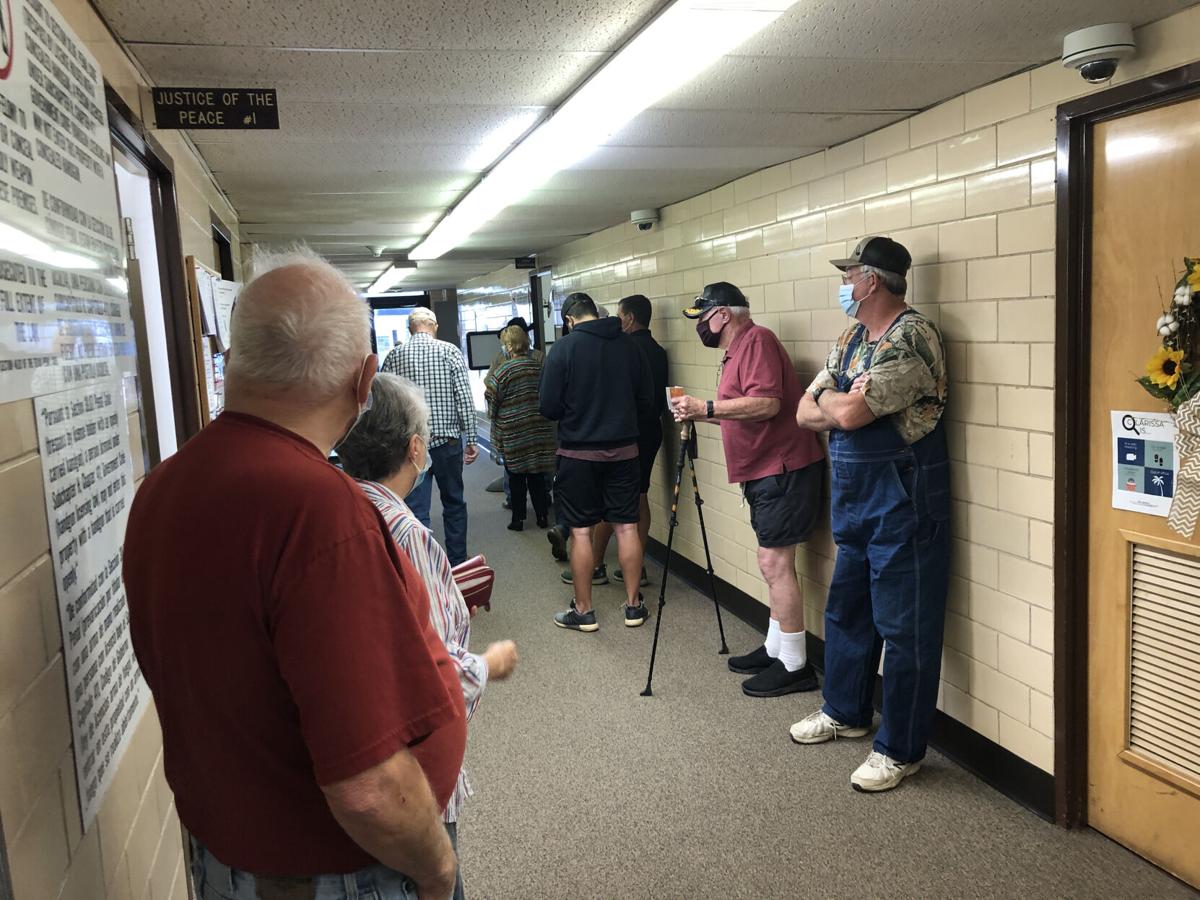 A line of voters wait in line to vote inside the Panola County courthouse on Tuesday morning. Tuesday has been the only day so far that has seen lines to vote, Elections Administrator Loretta Mason said. 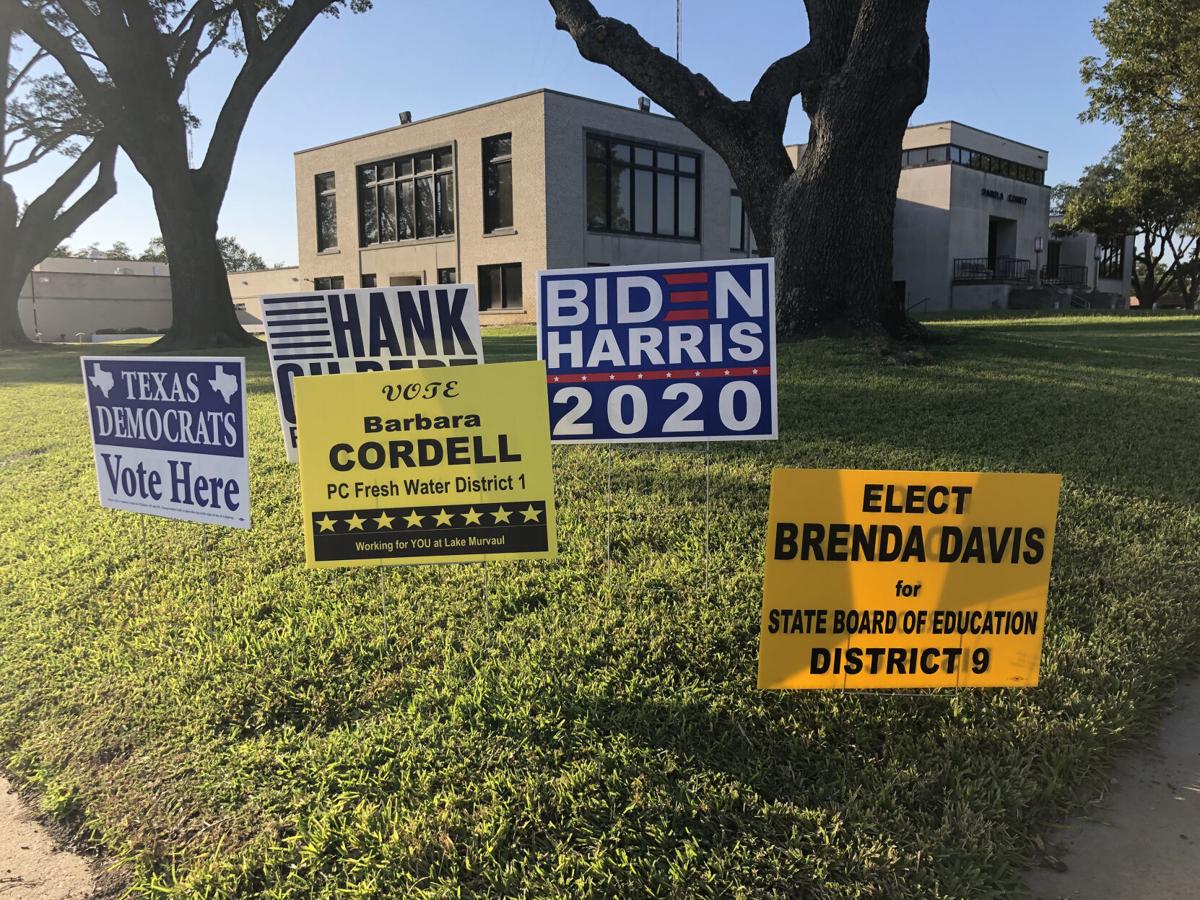 Campaign signs are posted outside the Panola County courthouse on Wednesday, the second day of early voting. This year’s election includes local, state and national races. 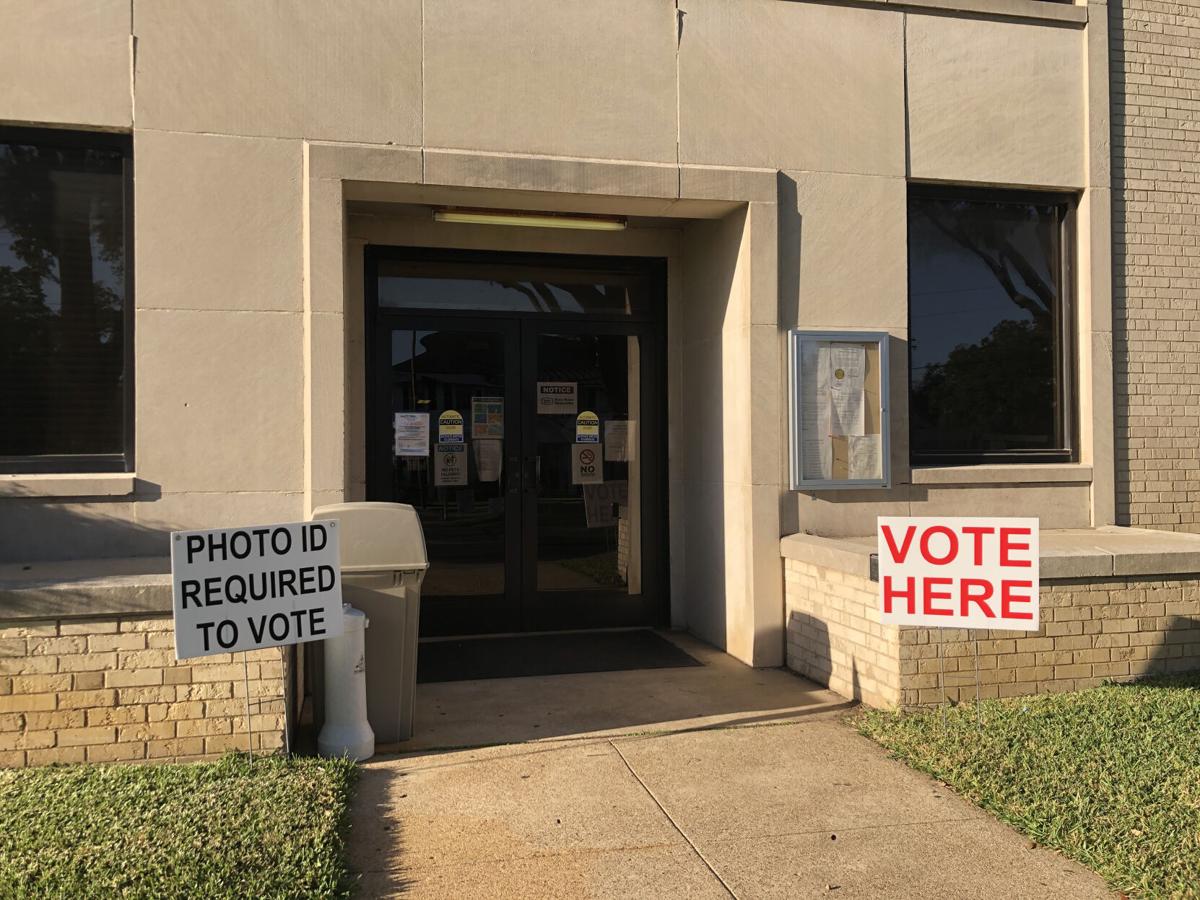 “Vote Here” and other signs have been placed around the Panola County courthouse during the early voting period.

A line of voters wait in line to vote inside the Panola County courthouse on Tuesday morning. Tuesday has been the only day so far that has seen lines to vote, Elections Administrator Loretta Mason said.

Campaign signs are posted outside the Panola County courthouse on Wednesday, the second day of early voting. This year’s election includes local, state and national races.

“Vote Here” and other signs have been placed around the Panola County courthouse during the early voting period.

Nearly 2,000 Panola County voters had already cast their ballots in the Nov. 3 presidential election before Friday morning — a sign of potential record early voting turnout and a sign that voter interest was high.

Mason said 701 voters voted on Tuesday, the first day of early voting. That was followed by 615 voters on Wednesday and 541 voters on Thursday, for a total of 1,857 in the first three days.

Looking back at the 2016 numbers, Mason said 6,427 people voted early during that election and 4,480 voted on Election Day, for a total of 10,475. But she noted this year’s election has an extra week of early voting and more interest among residents, something that may contribute to more votes.

The wait to vote this week stretched to about 30 minutes on Tuesday, the first day of voting — a sign of voter excitement, not problems voting. Mason said that Tuesday was the only day they’ve seen with lines; voting has been quick and smooth on subsequent days. She did note that it may take voters slightly longer to vote this time around because there is no straight-ticket voting option and there are a lot of races on the ballot.

The Elections Office is taking extra precautions against COVID-19, Mason said, including sanitizing voting booths between users and spacing people out while they are voting. But Gov. Greg Abbott’s face mask order exempts polling places, and Mason said they’re unable to enforce social distancing outside of the Elections Office.

For those who want to avoid crowds while voting early, Mason said Tuesday was really the only day they’ve seen long lines. But she suggests coming to the polls right before they close because there’s often no one there.

Mason said voters can also call the Elections Office ahead of time to check on the number of current voters to see how big a crowd is there.

Mason also stressed two laws that voters need to be aware of when casting ballots: You can’t wear campaign gear at the polls and you can’t use an electronic device within 100 feet of the polls.

Locally, the two party chairs said their voters were excited to cast their ballots.

Linda Lawless, the county’s GOP chair, was optimistic about voter turnout and her party’s chances this election.

“Every election always seems to be historic, and this one is no different,” she said. “I think the difference in this election: There is just an excitement on both sides, and I think it’s a great day when citizens feel the need to get out and vote. What we’ve seen so far in early voting is that the oldest so far has been 101 that actually came to the poll and as young as 18.

“So the door-knocking and the block-walking and the phone calls, they have paid off. As far as being more than the 2016 election, both this election and that election were heavy turnouts. I think this one will probably be about the same. We’re hoping for a greater increase, especially from Panola County.”

John Foster, the county’s Democratic Party chair, also said his party members have been encouraged by what they’ve seen so far in terms of turnout. While they may not be able to win many local races in East Texas, Foster says they could cut the Republicans’ margins and give Democrats a boost in the larger races.

Foster says his party’s chances statewide are good. He pointed to three million new registered voters since the 2016 election, as well as turnout on the first day of early voting and mail-in ballot numbers.

“People have the message this is a very important election and they need to vote,” he said. “This, of course, is very good news for the Democratic Party. Bigger turnouts usually favor the Democrats. We don’t know exactly how it’s going to break because the Republicans have a lot of supporters as well.”

Democrats are trying to flip the Texas House, where they need only eight seats. Foster said winning the U.S. Senate seat was a bigger hurdle, but it was a virtual tie in Texas in the presidential race — and that could help Democrats nationally.

“If we can make the Republicans spend a lot of effort in Texas — a state they usually take for granted — that means they have less resource to put in a lot of battleground states. So to answer your question, I’m very encouraged by what I see,” he said.

Lawless said they hope that people get out and vote during the remaining early voting period, with members encouraging their friends and neighbors to call 10 people from their circle to encourage them to cast a ballot.

“When we call, we’re just asking people have you voted and if not please go early vote just across the board,” she said.

Lawless said the Republicans have a good chance at winning in all of the races.

“I think they have a great chance, and we never know,” she said. “We just do the best we can do and leave the turnout to the voters. But we tell them if you need a ride, we’ll take you or whatever. We try to help the people in any way we can.”

Early voting runs through Oct. 30. Any registered voter may vote early in-person. Where you vote depends on which election you want to vote early in. Most elections’ early voting will take place at the Panola County courthouse — excepting two school elections.

If you need to vote at the courthouse by curbside, call (903) 693-0370 and the Panola County Elections Office says it will be happy to help you do this. During early voting, a member of the Elections Office staff will come out and help you.

Carthage ISD voters can vote early in the bond election at the Carthage ISD administration building, No. 1 Bulldog Drive in Carthage, on the following days:

Beckville ISD voters can vote early for the Place 5 trustee at the Beckville ISD administration building, 4398 Texas 149 in Beckville. The district said its early voting would be Oct. 13-30 from 8 a.m. to 4 p.m.