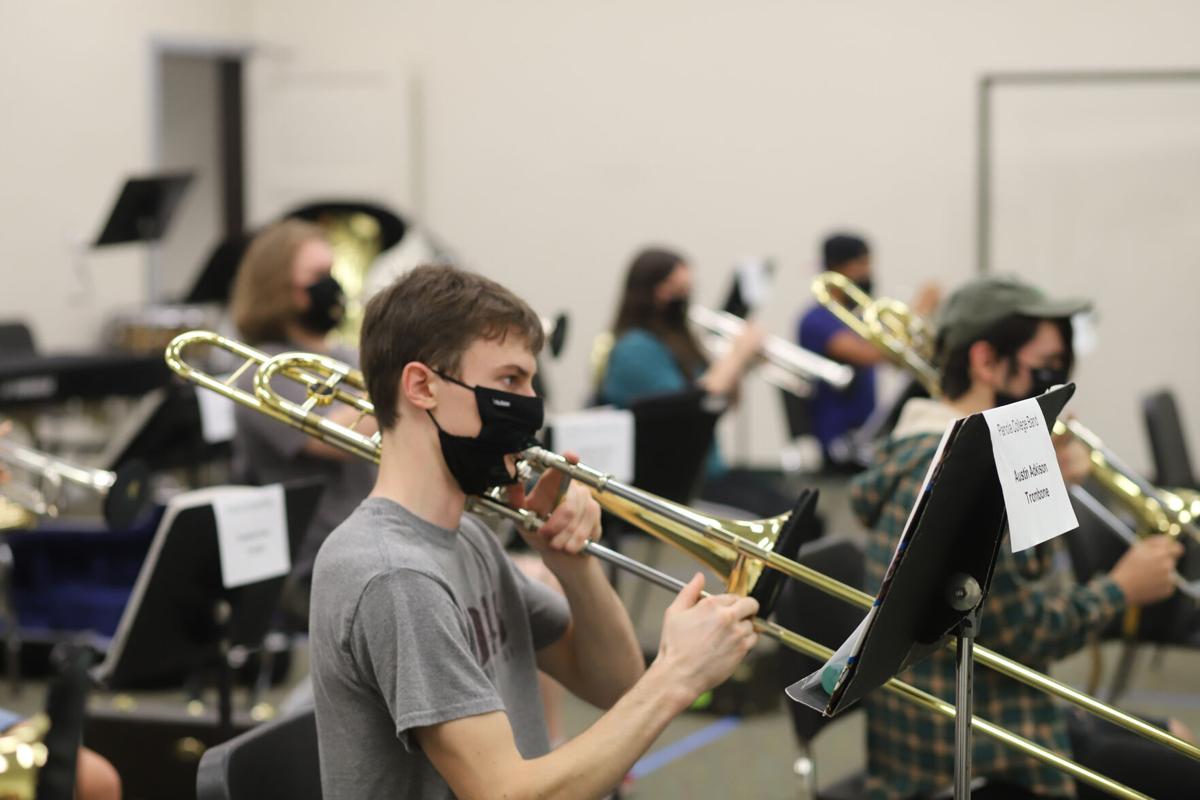 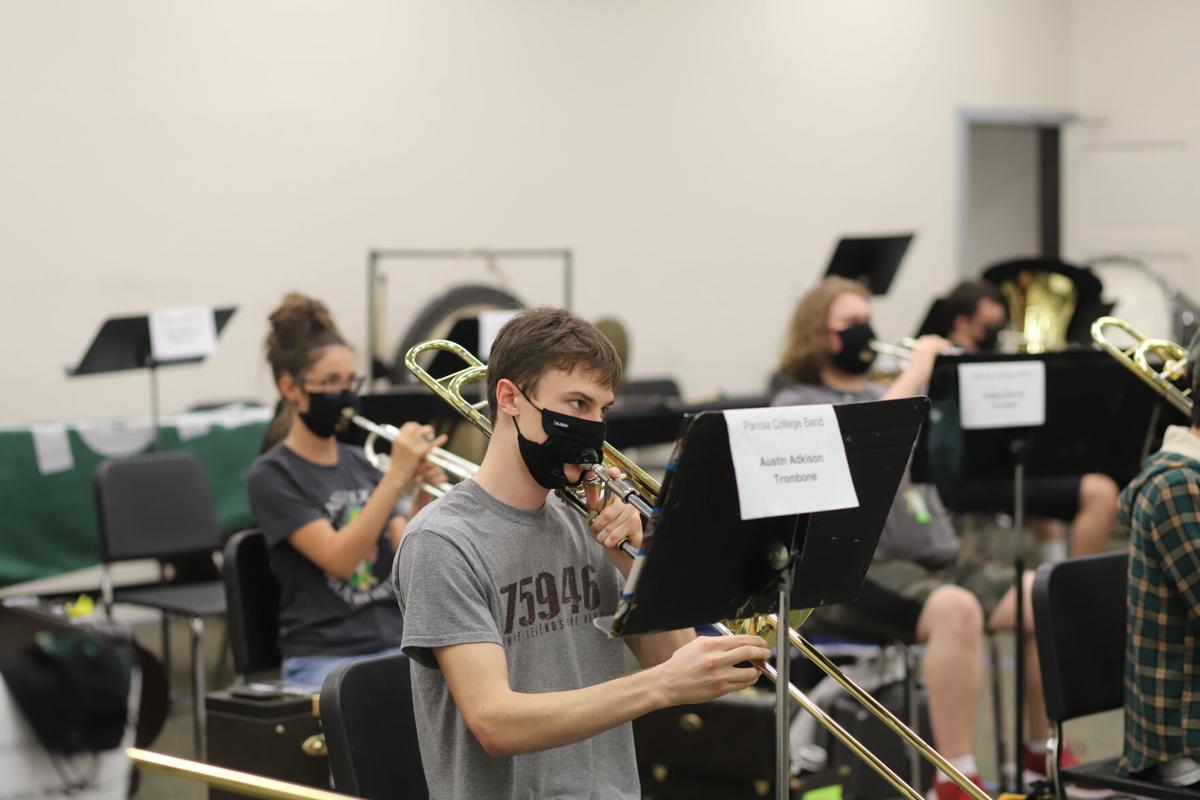 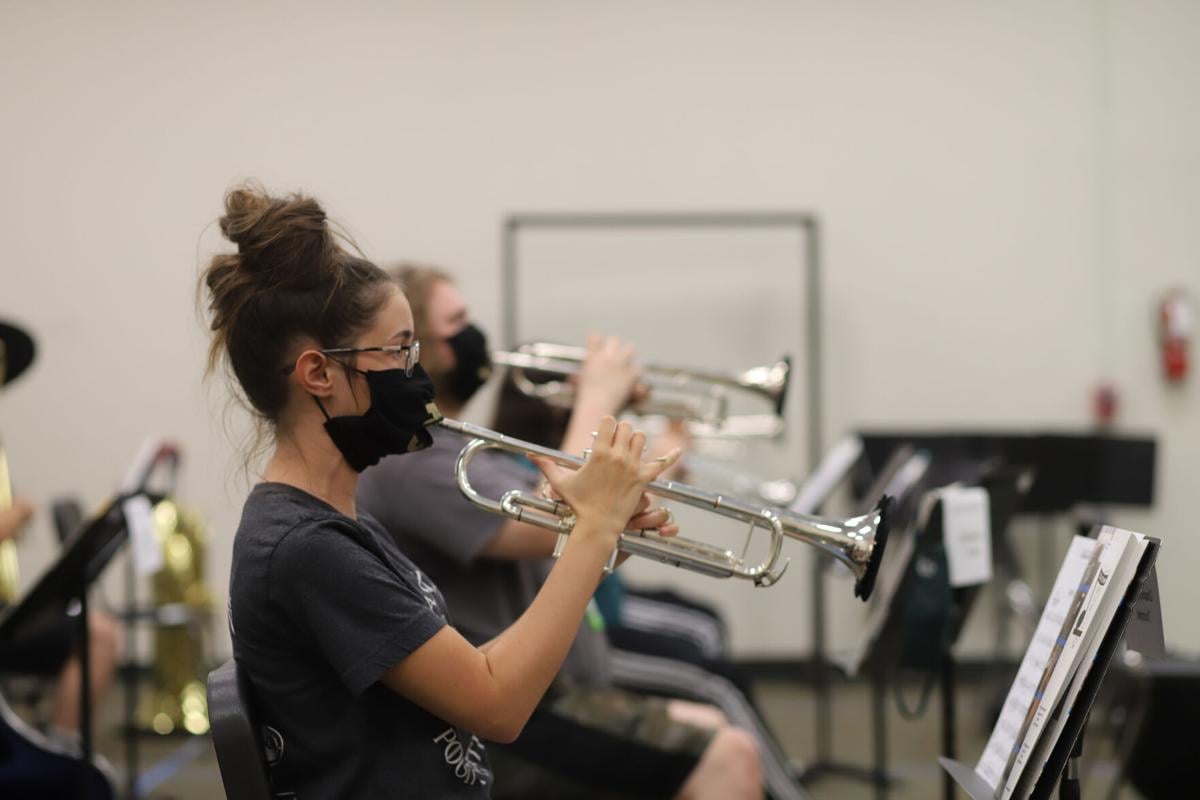 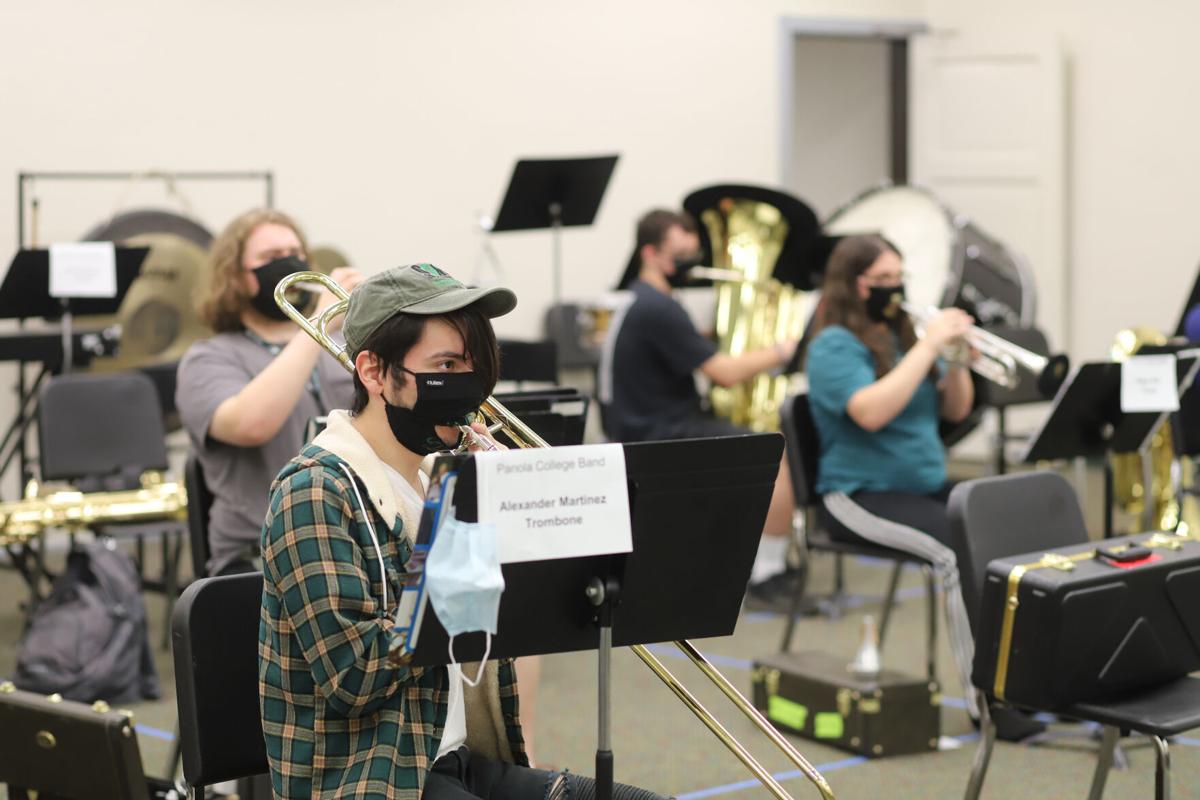 COVID-19 has brought changes to the Panola College concert and jazz bands, but they're working hard through it.

Band director Dwaine Hubbard said they are working as hard as they can to bring a performance to the people of Carthage, either outdoors or virtual.

"I think we may do a couple of little pop-up performances, either on campus or down at the square somewhere," he said. "Things are so abnormal right now. Friday nights in Texas are football nights with a big ol' marching band, and those things are just not happening right now. So we're trying to get back to where we can do that stuff."

The band is taking many physical precautions when it comes to COVID-19 safety. They have performance masks with a hole cut in the middle for inserting their instrument. Flutists have face shields with a notch cut out on the edge to accommodate their flute. Underneath their spaced out chairs are puppy pads to catch condensation.

"Brass instruments produce water," Hubbard said. "When you blow hot air onto a cold tube, it produces condensation. Now the colloquial word for it is spit valves, spit. It's not. It's condensation. But that is just something that's produced. So one of my students came in with me; we cut up 150 of those puppy pads, and so what the students do is they empty their water onto their puppy pad, and then at the end of class they throw that in the trash can as they leave."

All the chairs are spread out to give people plenty of space between; everyone in the band hall has their own six-by-six bubble, Hubbard said.

"Normally students would take their instruments back in the back to an instrument room. We don't do that anymore," he said. "We keep it at their chair, keep their music. As they come in the door, every kid picks up a Clorox swab at the door, and they sanitize their hands. Then they come in, we play.

The students have procedures for leaving as well: Once the 30-minute rehearsal is done, they swab their seats and anything they touch before leaving through the side doors.

"We leave so that the air conditioner can cycle the air out of the room, and the science says they want to make sure that the air cycles at least one time between classes," Hubbard said. "So we have concert band at 2, 2:30 we're done, we leave. 3 o'clock jazz band comes in, and we move the chairs back, they don't sit in the same chairs. We use different chairs, different stands so that there's no cross-contamination."

Hubbard said there are several challenges in doing things this way, and his students would probably agree with him that they prefer the regular, non-COVID way of doing things.

"We're rehearsing half as long, and so that means we're probably getting half as much music learned as we normally would," he said. "Normally we would play a concert the second week of October, and we'd have five compositions the band would play, the jazz band would play five or six, and that'd give us an hour's worth of music. Probably realistically we're gonna get three compositions done for the concert band.

"The jazz band, we had four pieces that we actually started last spring before we shut down that we never got to perform. So we pulled those out, and we've got those worked up pretty quickly. The jazz band will probably have to play a few more songs. We'll probably play six, so it'll probably be six and two or six and three to get a full concert."

They're doing the best they can though, and Hubbard is hopeful student musicians could go back to playing at basketball games in the spring and other traditional events.

"We're looking at that, (asking) are the Lions going to be able to have a show so the band can play at the Lions Club show? Are we going to be able to do our regular concerts in the spring?" he said. "If we can do that, then I think we will feel like we've made this school year as successful as possible."