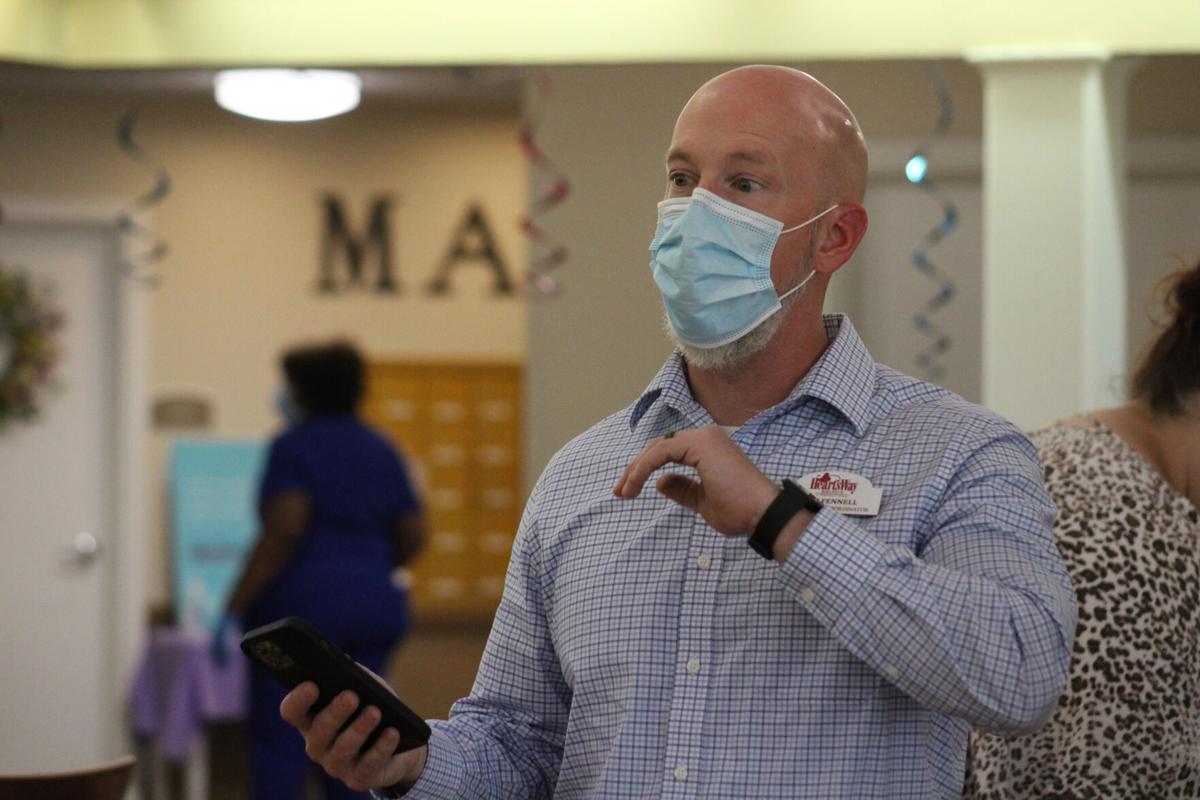 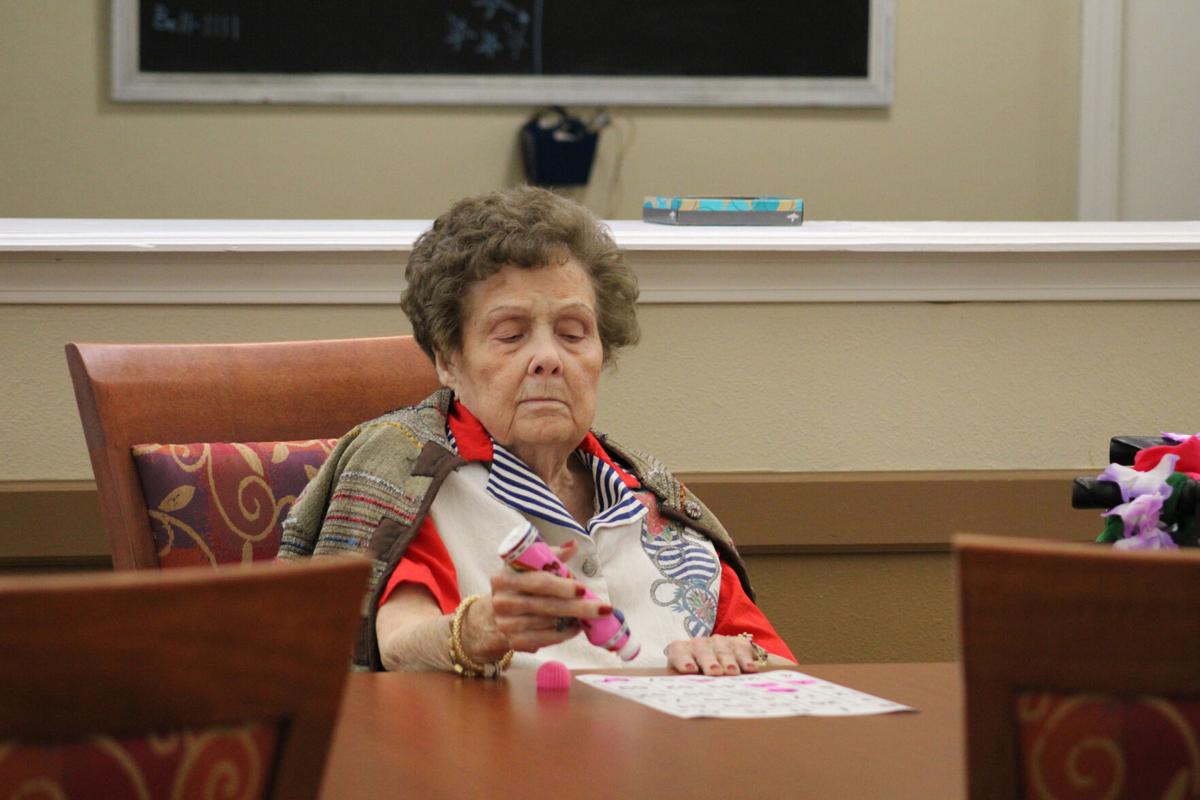 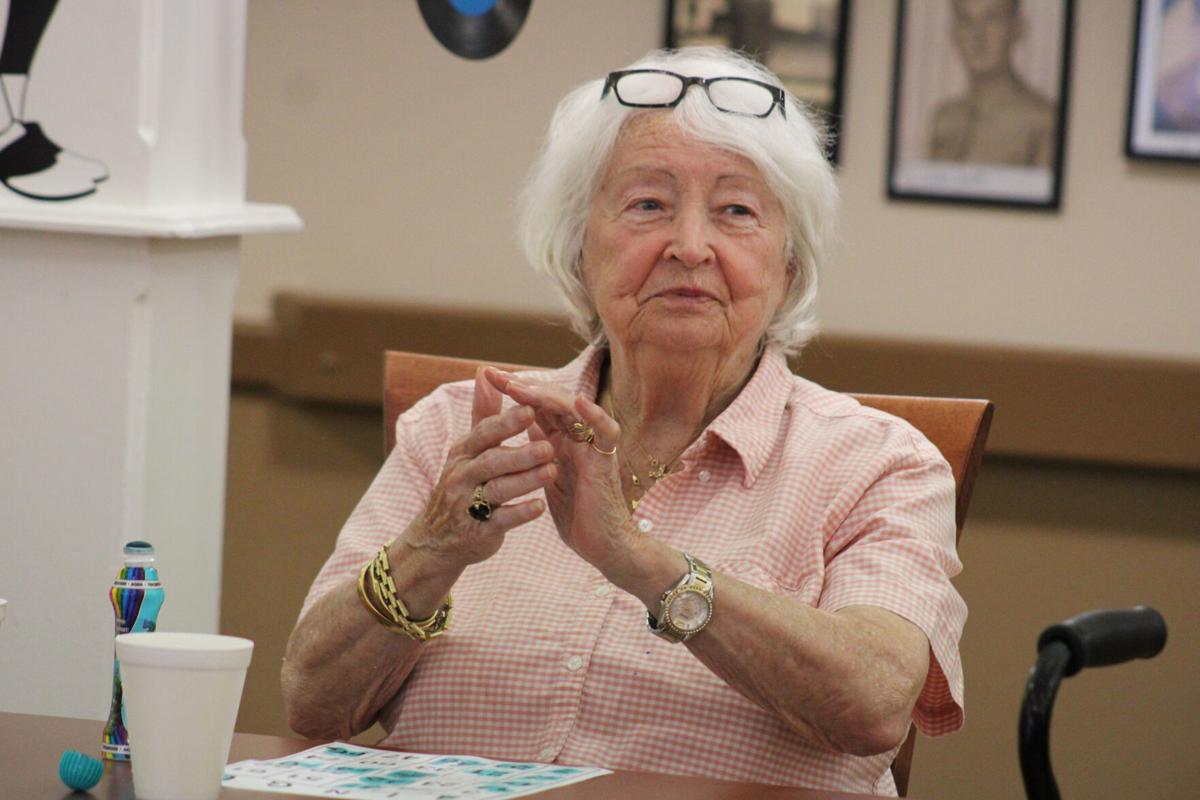 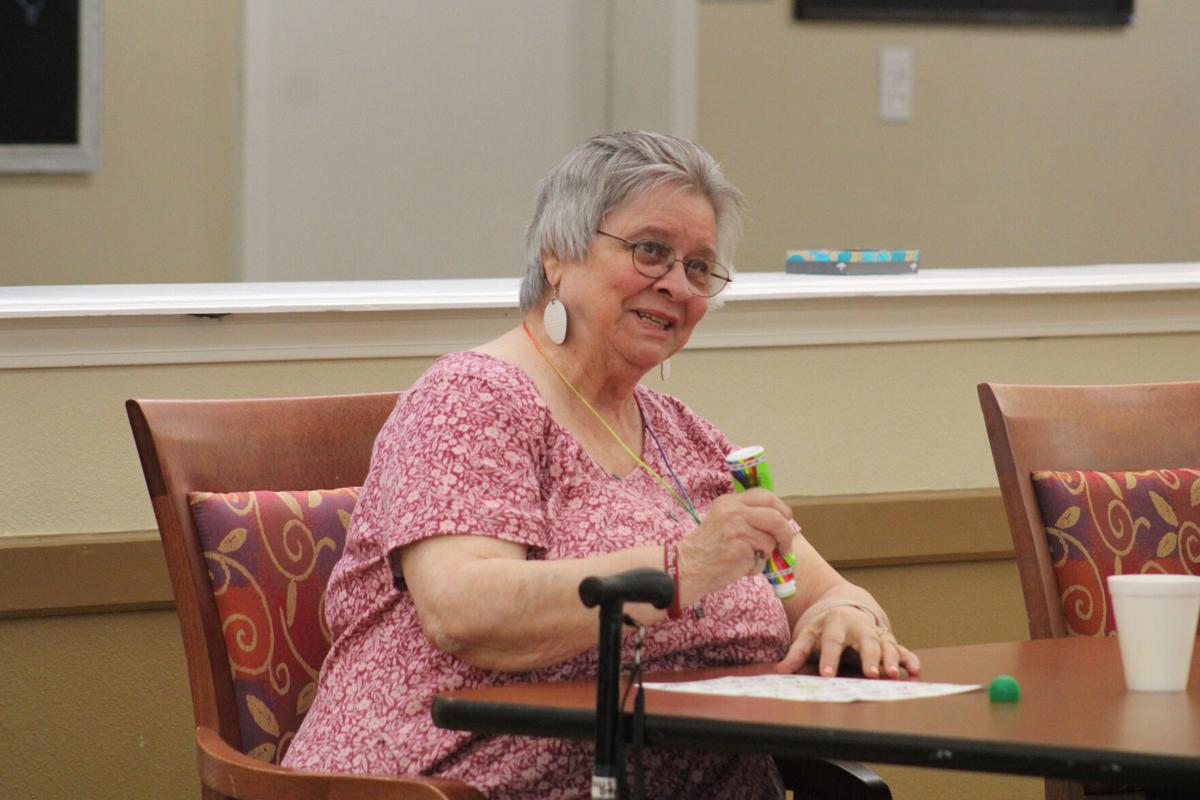 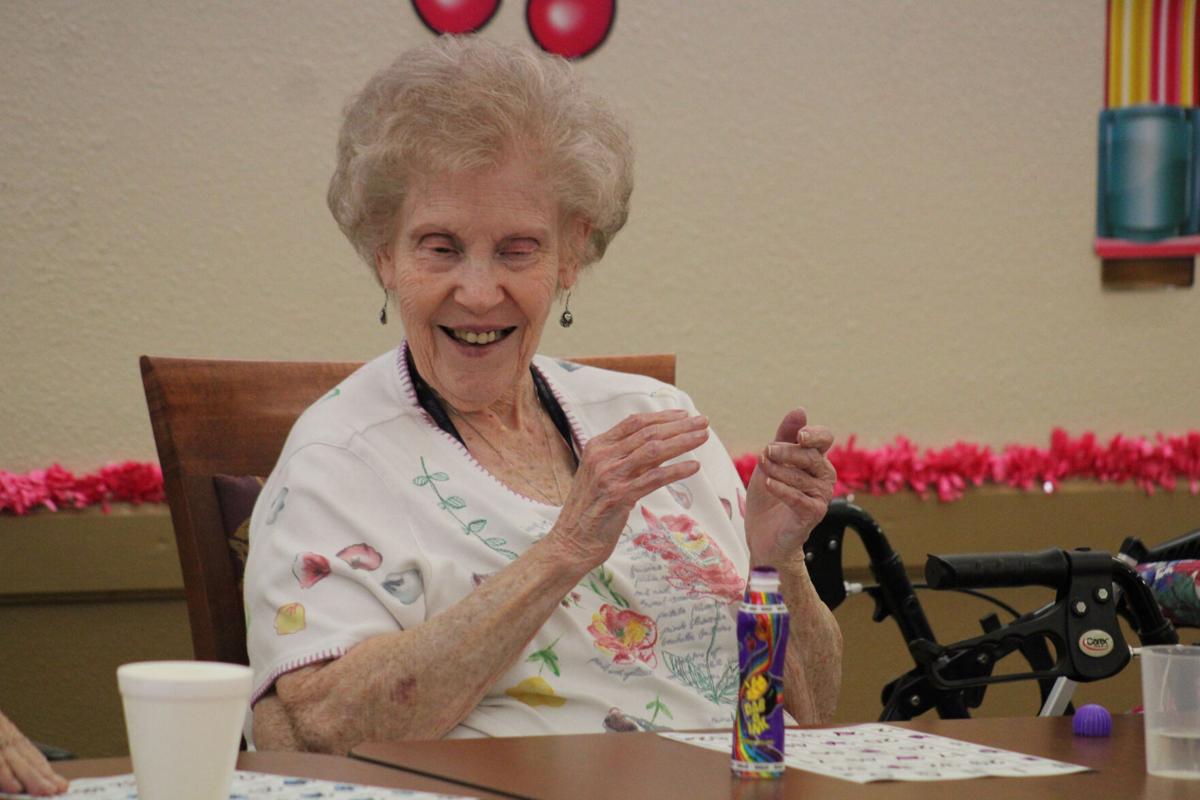 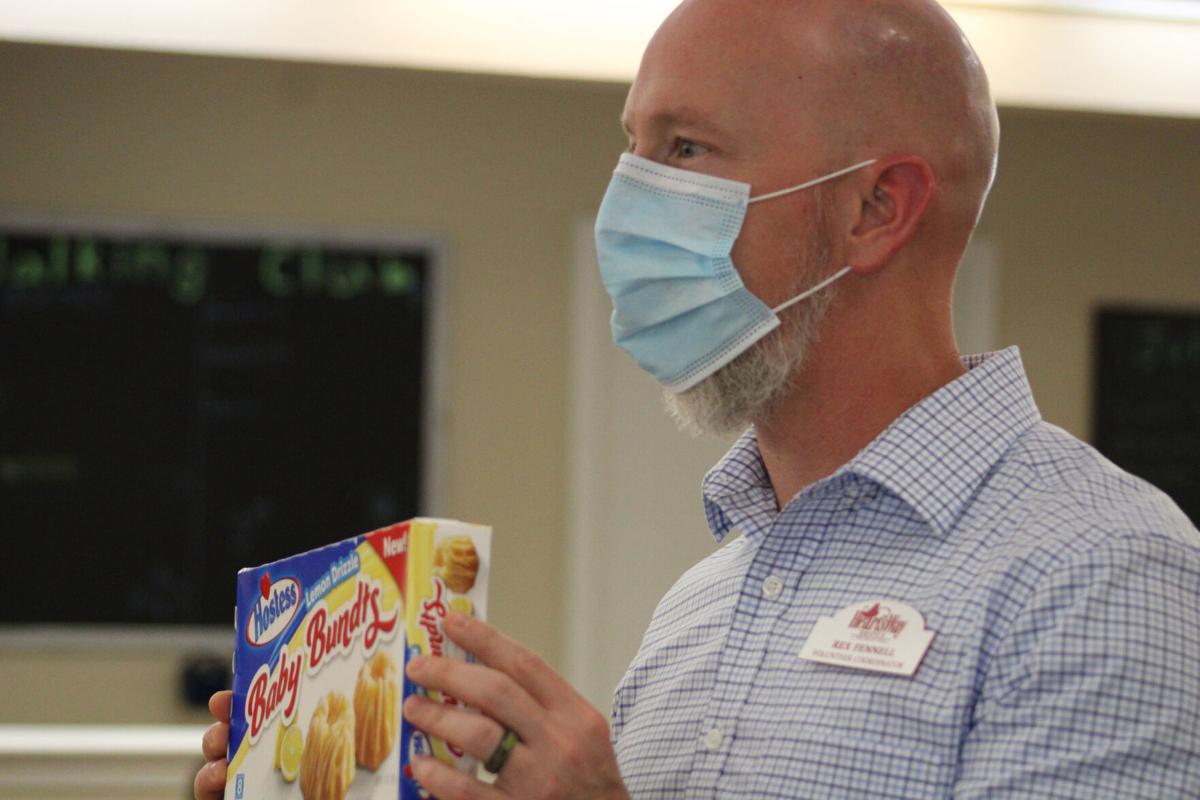 Rex Fennel holds up one of the options for bingo prizes after Winkler Place has its first winner during their game Thursday afternoon.

Rex Fennel holds up one of the options for bingo prizes after Winkler Place has its first winner during their game Thursday afternoon.

Rex Fennell, director of volunteer and outreach for HeartsWay Hospice of Northeast Texas, is inspired to help take care of people and help others do the same.

He worked in law enforcement for 15 years and then as special investigator for the DA’s office in Gregg County, but he was inspired to switch careers after seeing the way HeartsWay Hospice cared for his father when he had terminal lung cancer in 2013.

“The care my father was given was extraordinary,” he said. “I fell in love with the hospice team that cared for my father, and I bought into the hospice philosophy of care and compassion to those suffering from terminal conditions. A little over a year later, in July of 2014, I left law enforcement behind and began working for HeartsWay Hospice... Professionally, it has been the most rewarding thing I’ve ever done.”

HeartsWay volunteers are vital to the success of their organization and serve the Panola County and East Texas communities in many ways, Fennell said.

“Out of our Carthage area, we have about 10 active volunteers,” he said. “Agencywide, we have in the realm of 40 and 50 active volunteers... Ms. LaVerle (Spurgeon), she plays the piano twice a month at Carthage Healthcare. Nell Bauer sees patients for us and writes bereavement cards and goes to facilities. When Winkler would have their family night, pretty much all of the volunteers would come and help out with the family night.

“Ruth Shull’s amazing,” he continued. “Ruth’s in her mid 90s and is a volunteer with us, but is still very very active, and she used to do nails for us once a week at an area facility. She’ll still do that, not quite once a week, but she’ll do that a couple times a month and send bereavement cards. We’ve got other volunteers like Laura Pitchford who sees patients. Jean Jeter does bereavement cards. Carolyn Moore sees patients and does cards. Camie Thompsons does cards.”

A lot of the volunteers’ work is community involvement. They helped out with Mission Carthage’s recent fan drive and regularly help with their food drives. They volunteer with the different memorials that have taken place at the Footprints in the Sand Monument. In the fall, they help out with the annual Senior Expo.

It’s anything and everything, Fennell said. Inside the facilities, they’ll help out with various activities like bingo, ice cream socials, exercise classes, whatever the facilities ask of them. Within the homes of hospice patients, volunteers do a lot of visiting with those in care alongside the caregivers.

“Taking care of people at their most vulnerable is really important,” Fennell said. “For a lot of people, those interactions are awkward for them; they don’t like going to see people. I remember when my dad was on hospice in 2013, a lot of the men from his Sunday School class wouldn’t come see him. It’s not that they were somehow being meanspirited or anything, I’m sure it was just hard for them.

“You don’t realize sometimes, you think ‘well they’re home, and they’re on hospice, and their wife’s taking care of them’ or whatever,” he said. “You don’t realize how lonely that can be, not only for the patient but for the caregiver too... we don’t do the things that the nurses and the physicians do. We’re not clinical. But for us to come in and just be that friendly presence, to let them know that there’s someone thinking about them, to have that conversation to get their mind off of the things that they tend to dwell on. That’s a real blessing.”

COVID-19 definitely limited the volunteers, but they pushed through to find new ways to help those in need, Fennell said.

“We made phone calls. We had people that acted as pen pals, that wrote letters to people in facilities,” he said. “We had people that built birdhouses so that we bring them to facilities so people could paint the birdhouses and decorate the birdhouses. We sent cards and letters. We sent puzzle books and word find puzzles and crossword puzzles and everything that we could think of that we could get into the facility without the individuals getting into the facilities and connect on the outside. We made a lot of crafts that we would make that would be kind of plain, and then they would get here or other facilities, Carthage Healthcare, Panola, and then residents there could decorate those, color those, do whatever to try to keep people engaged.”

Fennell said they were able to get back into the facilities around late March.

To become a volunteer with HeartsWay Hospice, contact Fennell at (903) 690-9924 or (903) 295-1680, or email him at rexf@heartswayhospice.org. Volunteers must fill out an application, get a background check and go through a brief orientation.

“Once they do that, they’re off and rolling,” he said. “We want people to do what they want to do. If you have to twist people’s arms to do something that they really don’t want to do, they’re not likely to stick with it. But when they’re doing things that they’re passionate about, that they enjoy doing, they’re going to stick with it. So we tell people, do what you want to do on your time table, and then I’ll find things for them to do that fits with that schedule.”