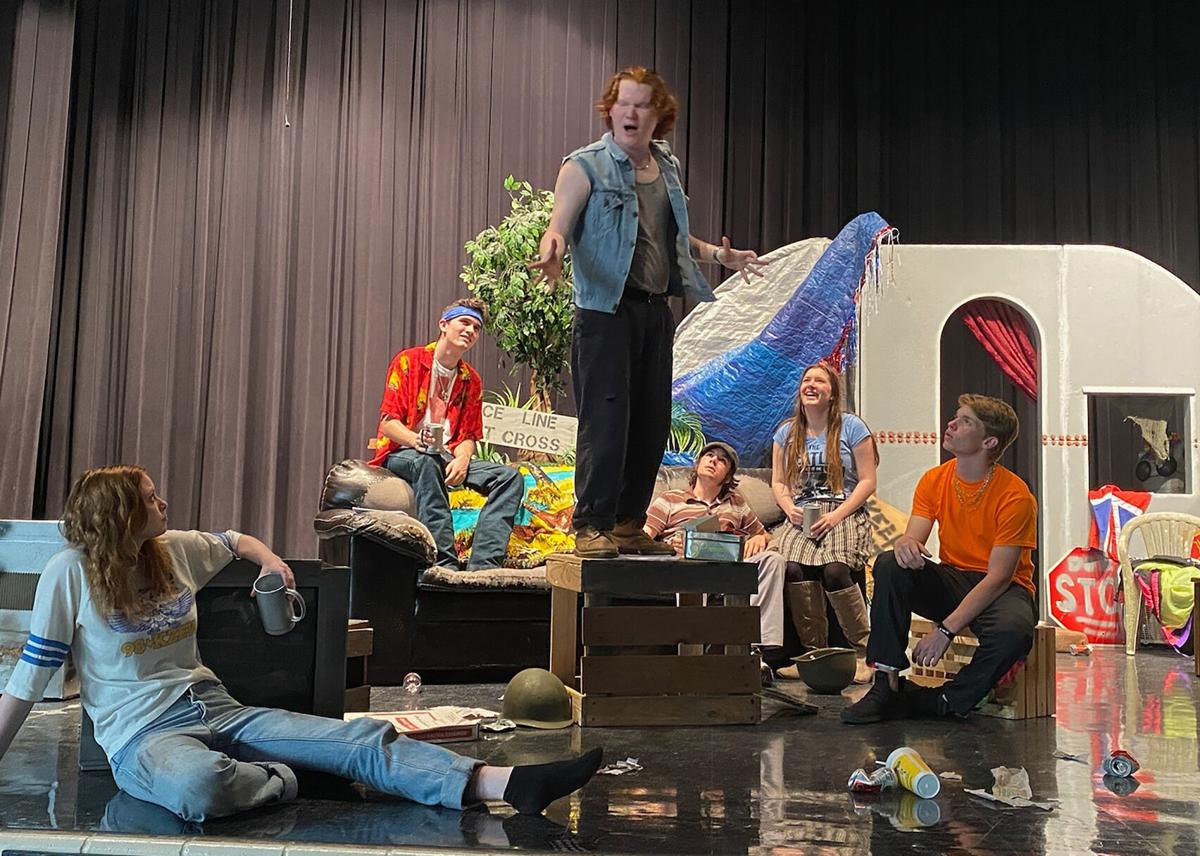 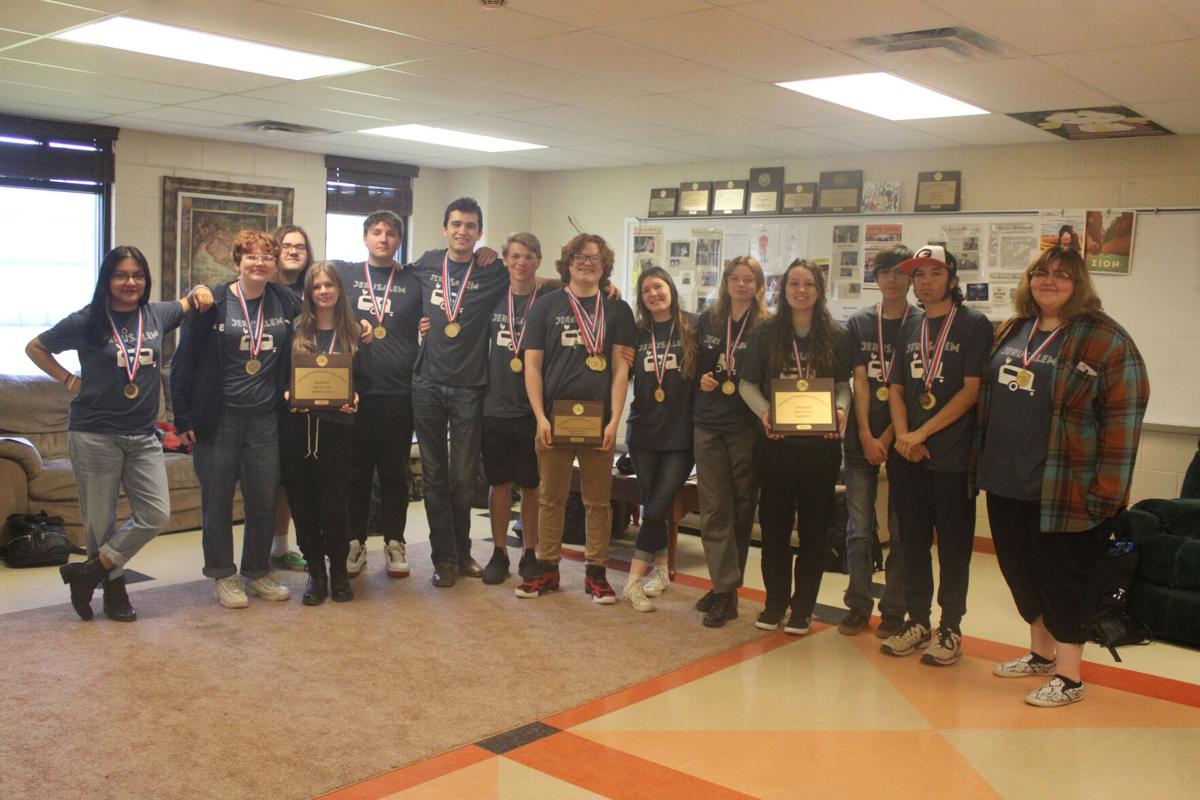 Gary High School cast and crew for One Act Play pose with their awards and medals Tuesday morning. 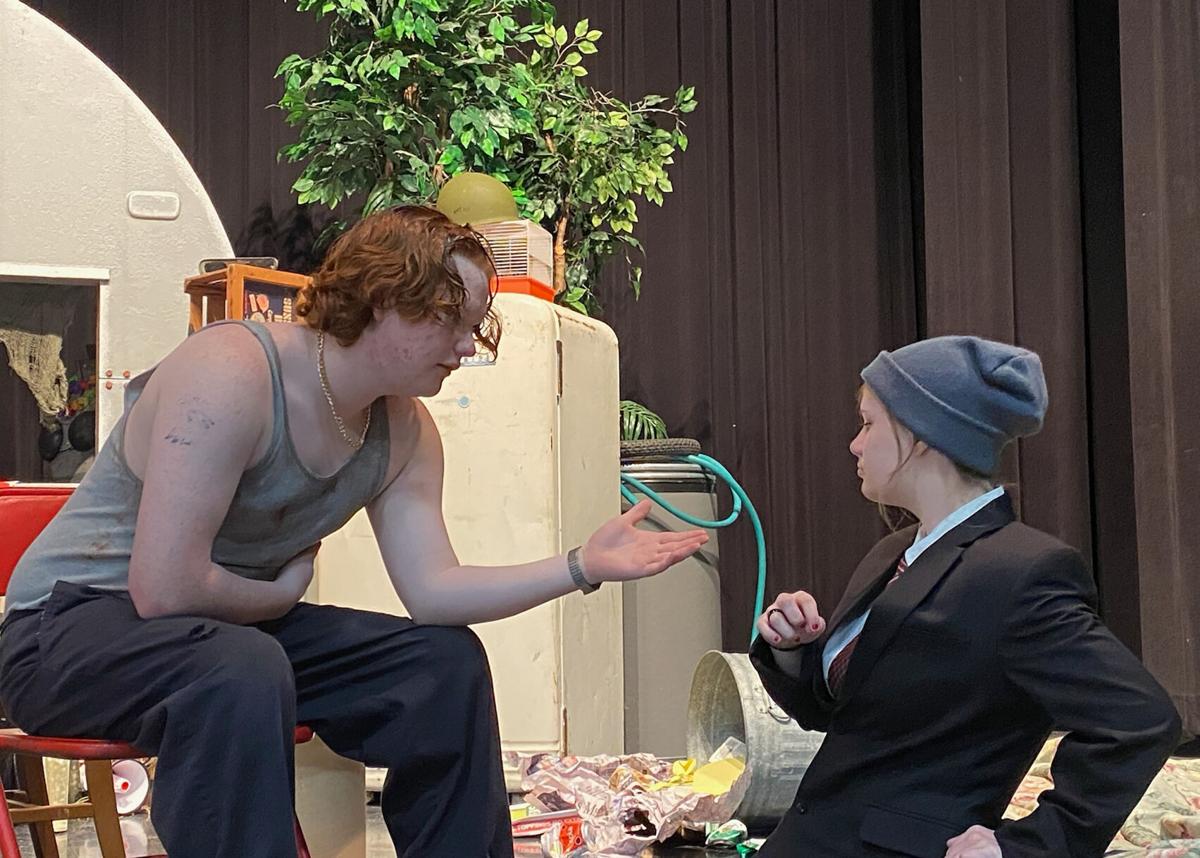 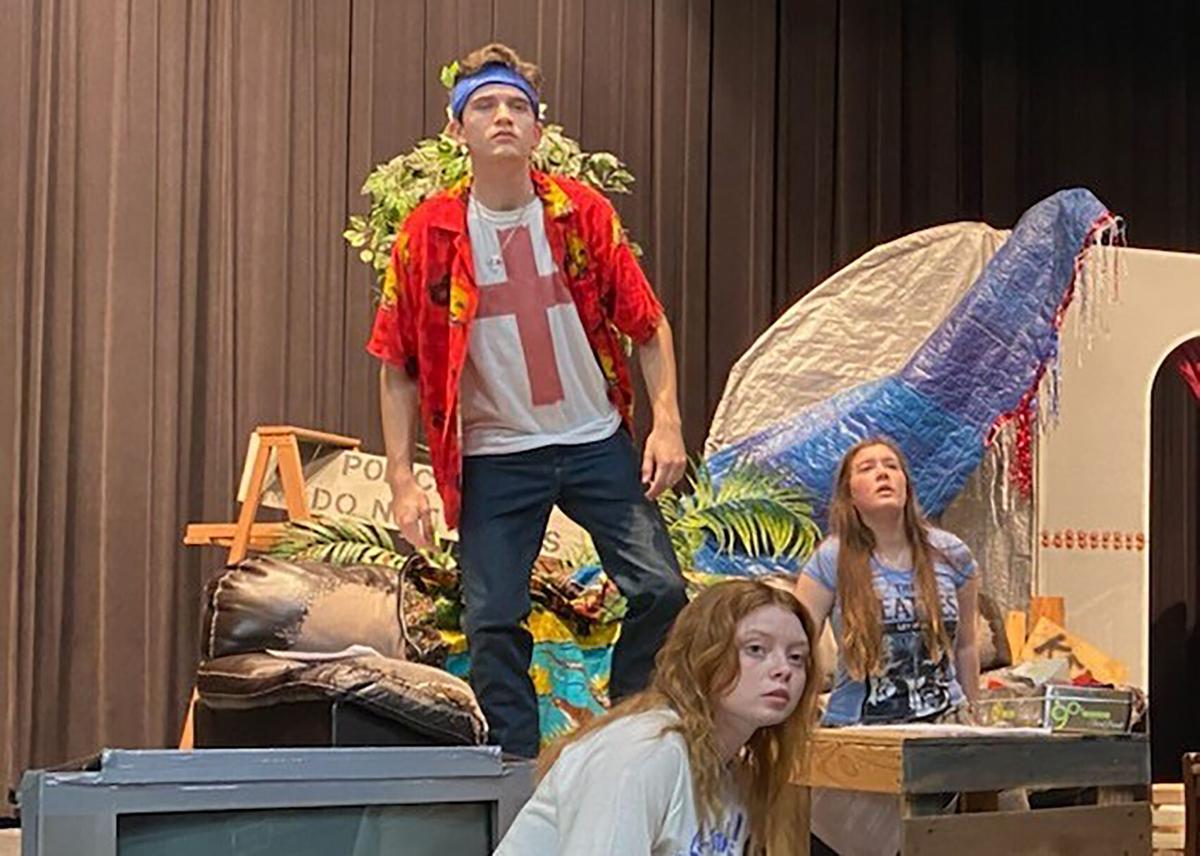 Gary High School cast and crew for One Act Play pose with their awards and medals Tuesday morning.

Gary High School theater production students will be going to state for their One-Act play performance of “Jerusalem” on April 28.

Director Michael Powell said the first thing that set their play apart from the rest is the script.

“It’s so unique; it’s never been done by a high school before,” he said. “I think maybe one college in America has done it before. It’s a very British play that was popular in London on Broadway but is kind of an unknown, and so finding this play, and all of the characters are so quirky even if they just have a few lines. It’s so well written.”

The students were prepared for the play by their fall performances. This year they did things a little different, starting practicing for one act in January instead of November in the hopes that they might peak later. During the fall, they performed Shakespeare in “A Midsummer Night’s Dream,” a musical in “Beauty and the Beast,” and then a five night run of “Our Town,” which Powell called the greatest American play.

Powell said he is very thankful to be going to state competitions for the third time.

“I told my wife the other day that I’m just as excited, it doesn’t even feel like I’ve ever been before,” he said. “It’s no difference in excitement from the other two.... It feels better this year, and really if I had to choose the three I would choose this one and say it feels the best because we didn’t get to go last year, so it almost feels like going twice because they worked just as hard last year, and then had a pandemic take their opportunity away. And so it feels like we have more credibility to say we would have gone. I think we know what a good show is, and so that feels good.”

Last year, the school’s production of “Amazing Grace” won district, but due to everything shutting down because of COVID-19, they weren’t able to perform at bi-district and possibly move forward in competitions, and then this year they almost didn’t make it out of bi-district to region.

That’s when Powell decided to really challenge his students.

“I played them a song, and then I played them a remake of that song, and I was like ‘We have to change the play the way these two songs are different.’ Same song, different song; we have to do same play, different play,” he said. “And we cut it and rehearsed it and changed all sorts of things, and they made every single change I asked for, and at region they were ready, and they knocked it out of the park at regional contests, and we got a 1, 1, 2, and we went the first day, and we didn’t even get to finish the show — the show got shut down. So going the first day and not finishing the show and winning first, we feel pretty ready to go to state.”

The show was shut down early due to a miscommunication between Gary’s crew and the Panola site crew along with some confusion about where they were timewise.

“It got shut down at 39:30, but you get 40 minutes,” he said. “We like to shut down at 39:50 because ten seconds is a long time. You can shut down a show. We had 11-15 seconds left in the show, but it’s like the exclamation point that really solidifies that show, and he’s right there giving his ending monologue; he’s about to collapse to his knees and give the most piercing part of the show that just rips everyone’s hearts out, and then all of a sudden all of the lights go off. We’re taught when the lights go off you just shut up. But the sound booth’s timer stopped working and some other discrepancies. So we were scared to death that we didn’t even advance from region because of that, and then we still won first. So barely getting by in bi-district, not finishing the show, we just want to go to state and like, finish the show.”

Senior and lead for “Jerusalem” Dylan Essery said he has a kind of funny motivator to do well in competitions this year.

“Last year we didn’t get to finish the show, and like Dylan I was like ‘man I wanna beat Cade Coligan,’ but that never got to happen, but it’s okay because I’m gonna get to go to the same school as him, and then I’m gonna outshine him there in his own playground,” she said. “But it’s really been interesting, and this year I’ve gotten to do play parts and stage manager, so in a weird sort of way I’m still getting to play a big part, just without being on stage.

“It’s been very exciting... I haven’t really thought a whole lot about last year because I don’t want to dwell on the negative, and I want to be happy with what we’re doing this year, and I really am,” she said.

With COVID restrictions, competitions have been different this year. So far the cast hasn’t been able to perform at competitions with an audience or without masks, but Powell said they’re excited to have an audience at the state competition in Seguin and take off their masks to perform.

“What they’ve done at state that’s different is it used to be one venue, and all 1A through 6A would be there, and there was a huge celebration because like 2A would go in one whole day, then the next day 4A would go,” Powell said. “Well all those 4A schools would come in the day before, and they would watch the 2A, and the 2A would watch the 4A. Well now it’s six different venues, so it’s spread out... there’s six different venues over the course of two days.