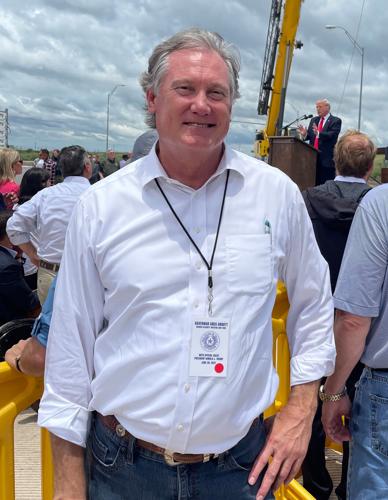 Though State Rep. Travis Clardy may have never represented Panola County in Austin, the incumbent Republican of Texas’ 11th House District is no stranger to the area and its people.

The Nacogdoches-based lawyer could see Panola added to his district soon if voted in for another term, thanks to a recently passed redistricting plan. Clardy said he isn’t coming into the county unprepared after years of working on cases in Panola.

“This is all very much like home to me,” Clardy said. “East Texas is like a small, close-knit community. There are business ties between Carthage, Nacogdoches, Henderson and Center, and family ties… It feels very natural to be taking these counties on.”

First, Clardy has to navigate a Republican primary election on March 1 against three other candidates vying for his position. No Democratic candidate filed for the District 11 race, so a primary winner will effectively take the seat.

Multiple generations of Clardy’s family have called deep East Texas home since before the Civil War, he said, but his immediate family settled farther west in Lubbock. After spending his college years at Abilene Christian University, and then Pepperdine University in Malibu, California, Clardy and his wife, who hails from Tyler, decided they wanted to live somewhere rural.

Clardy said the rural lifestyle practiced by generations of farmers and ranchers in his family continue to influence his outlook and decisions in Austin.

“I really feel it’s important that we retain our roots,” Clardy said. “I talk about this frequently — that we’re losing our ‘Texanity’ the farther we get away from the soil and the dirt and our heritage. If you go back two or three generations, anybody back then is going to have a real connection to a family farm, to the ranch, to the country.”

With “all due respect” to his urban and suburban counterparts in the House, Clardy said too much power and money is staying in metropolitan areas and out of towns like those in East Texas.

Some of his favorite achievements at the Capitol reflect a desire to see more investment in rural East Texas, like securing $200 million for expansions to the Rusk State Hospital, renovating the Hotel Fredonia in Nacogdoches and helping Stephen F. Austin State University create a new center for science and technology studies.

The congressman praised efforts by Texas Republicans to amend state voting regulations with the passage of last year’s Senate Bill 1, which established limits on 24-hour voting, drive-thru voting and tightened restrictions on voting by mail, among many other actions, but criticized efforts by Democrats to block the bill by leaving the state before voting occurred.

In the coming year, Clardy will serve on a Texas organization called the Sunset Committee, designed to review the operations of several state government agencies to determine where the state should allocate resources, or take them away. This interim season, he and four other chosen representatives out of the 150 total will examine the Electric Reliability Council of Texas (ERCOT) and several water authorities along with five Texas senators and two citizen members.

The appointment will allow Clardy and the committee a chance to see where ERCOT could improve following power problems that crippled the state during Winter Storm Uri last winter. The representative praised Texas’ mixed energy portfolio of renewables, natural gas and nuclear, but said ERCOT’s management of the state’s electric grid was “embarrassing.”

Clardy calls his appointment to the committee by Texas Attorney General Ken Paxton a high mark in his career.

“I think it’s reflective of the experience that I’ve had, the success I’ve had and the relationships that I’ve built,” Clardy said. “I’ve done a good job as a steward and representative of not only this district court of the state of Texas.”

If elected for another term, Clardy said he will remain focused on keeping Texas elections “very strong,” funding public education and aiding development — especially in rural areas. With the rise of working from home, Clardy sees an opportunity for previously overlooked areas of the state to seek development.

“One of the things I think makes rural Texas so attractive for people is that they want to get out of the concrete jungle,” Clardy said. “That’s one of the positive things to come out of COVID… All these [small] towns are seeing a great deal of interesting people wanting to move there. Because they know they can live where they want to, and still perform and do their job.”

Clardy said District 11 voters should consider him over primary opponents Greg Caldwell, Rachel Hale and Mark Williams because he has gained experience in the House and shown his dedication to East Texas.

“I’m going to be that person that represents the values of East Texas,” Clardy said. “I’ll look after our teachers, our schools. I’m going to look after our institutions, and I want to protect our economy. I’ll support law enforcement and securing our border.”

The Watchman is profiling candidates in each of the contested elections in the upcoming March primary. Early voting begins Feb. 14, and Election Day is March 1. Go to panolawatchman.com/news/elections to find all of our elections coverage.