Carthage will make the switch to a once-a-week garbage pickup and require residents to use trash carts beginning at the end of the month.

“We know there will be some adjustments, there will be some issues that we have to deal with,” City Manager Steve Williams said. “Anytime you change things, that will happen. But it’ll be the norm, you’ll get used to it and it’ll work fine from here on out.”

The new trash routes are detailed on a map provided by the city: 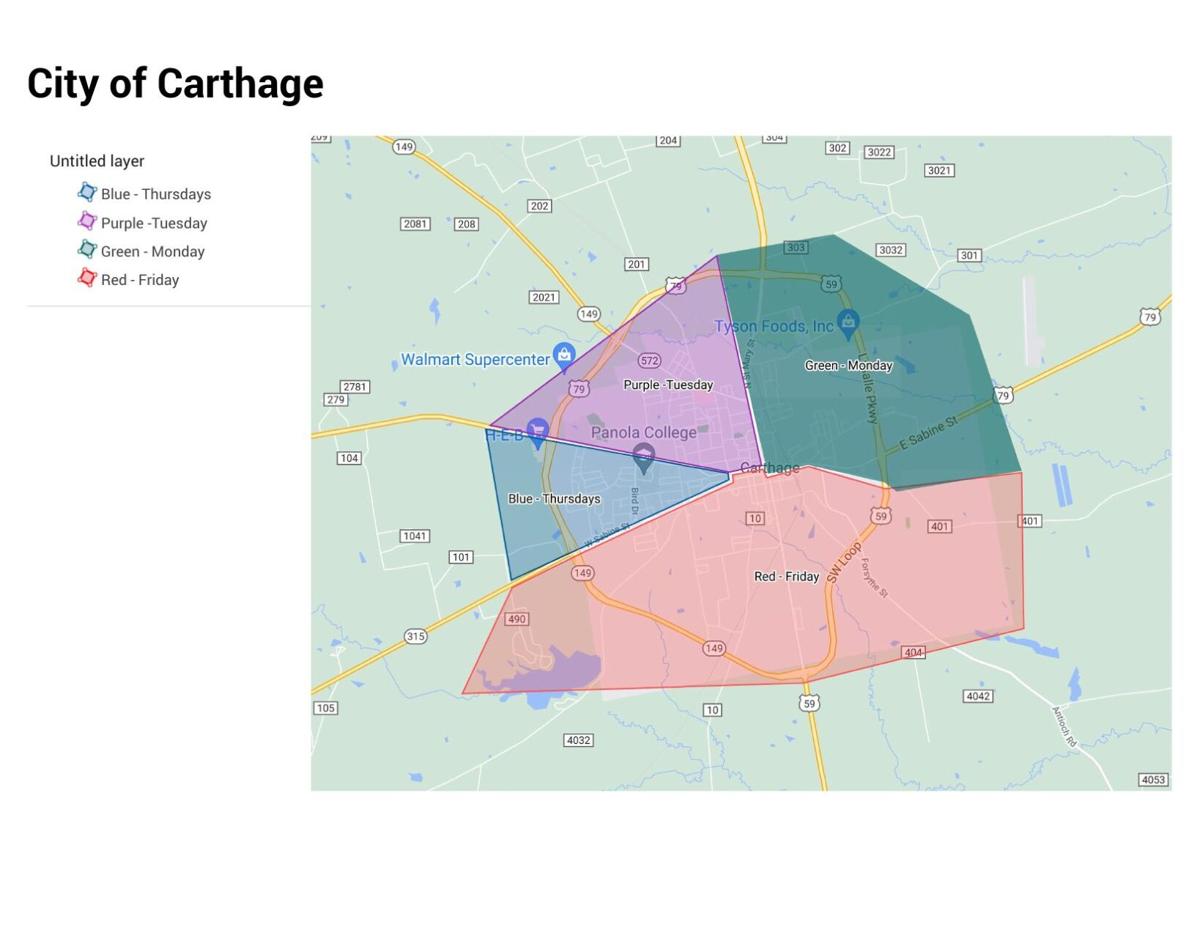 The city signed a new contract with Waste Connections earlier this year. Under that contract, residents will see once-a-week trash pickup for a cost of $15.45 a month. The city will also make the switch to using carts, with everyone getting a free 96-gallon Waste Connections cart to use for their homes.

Additional carts are available at $5 each. Residents who need to request more carts should call City Hall. If a resident is already using more than one cart with the current service, all of their carts will be replaced when the service changes are made.

“Not every cart is created equal,” Aulds said. “Some of them, even if they are roughly the same shape, the polymer that they use is a little different, when we go to grab it with the automated arms, crush it, then we end up dumping it inside the truck. Once it goes in there, it’s lost forever. Or some of the smaller ones, they can’t even get picked up with them because they’re that little.”

Residents can expect their new carts (and dumpsters for commercial customers) to arrive between May 24 and May 28. Waste Connections will also send out a letter to all residents and customers with instructions on how to use the new carts.

All trash should be placed outside by 7 a.m. on pick-up day. Aulds said carts should be placed within 7 feet of the street and at least 3 feet away from any stationery object, like a mailbox, fence, parked car or tree so that the trucks don’t hit anything when they go to collect your trash.

Williams said the only exception to the service changes are residents who live in University Park Place, because the trucks can’t go down behind their houses and pick up their trash. So those residents will continue to use bag pickup.

Residents who physically cannot get their trash to the streets, such as disabled or elderly people or residents who may need temporary help after surgery, can make arrangements with the city to have their trash picked up without them having to walk it to the street. Williams said this is something the city already does and will continue to do.

Waste Connections will pick up carts that are filled to the brim and may be slightly open. But residents who continuously overfill their carts will need to get extra carts so their trash all fits.

For things like leaves or bulk items, Aulds said residents have several options.

“If you’ve got a minimal amount of leaves and things, you can throw them in a bag, throw them in your cart,” he said. “That first cart or your second cart if you do have two, if you know you’ve got a bunch, you can always call the city and get scheduled for extra carts for that month. It’s $5 for the month. You can throw all those extra bags, the leaves, inside those carts or there’s always still the transfer station off the Loop that you can take those things out to and dispose of there.”

Another option, Aulds said, is to call Waste Connections and schedule a bulk pickup.

While the coming changes are different from the city’s current twice-a-week, bag pickup service, Williams said the city made the switch for several reasons. Right now, he said, Carthage was the only city Waste Connection services that uses twice-a-week pickup — and when they went out to bid, no other company offered to do twice-a-week pickup.

“When you see their trucks going around town, they ride in the same place in the street every week,” he said. “This will cut that down by half, which will help save our streets.”