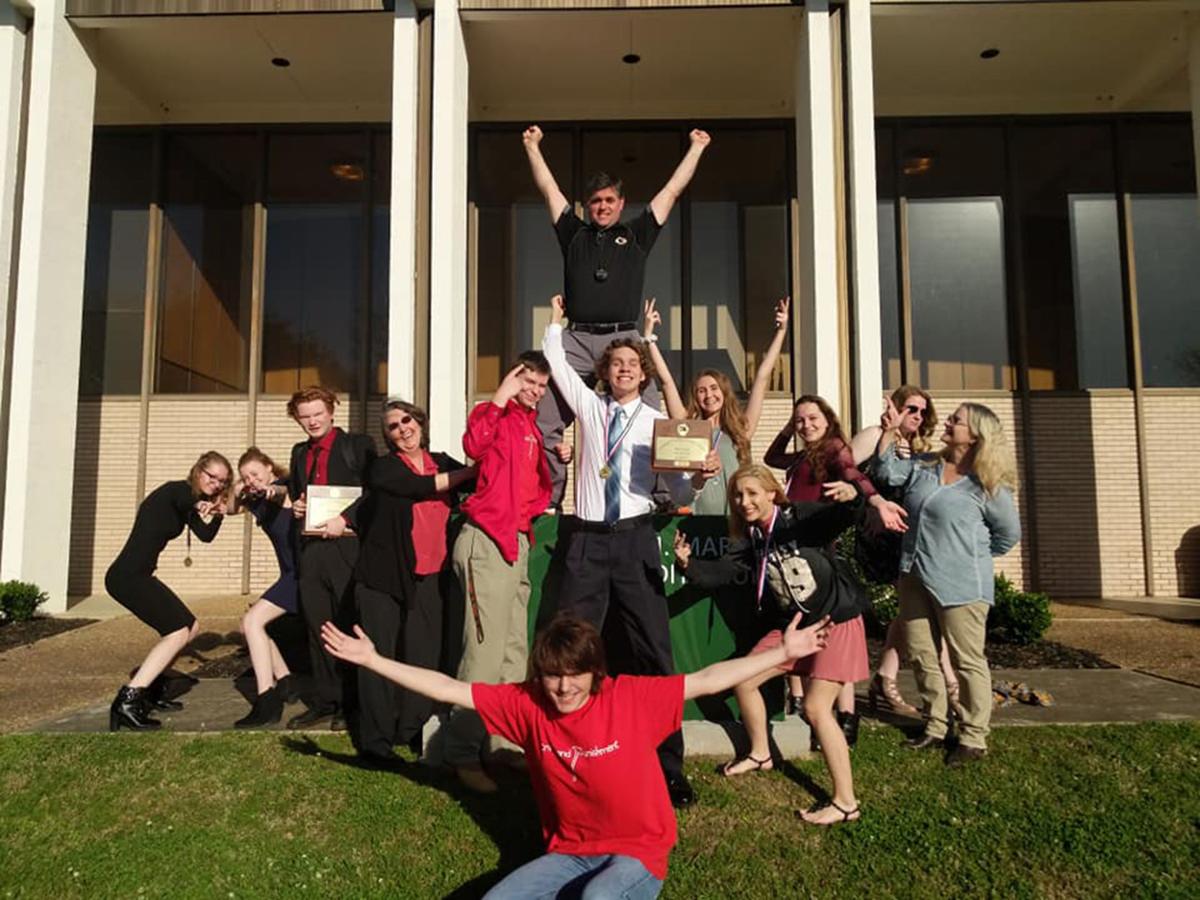 Cast and crew of Gary High School One-Act Play rejoice after advancing to area from bi-district. 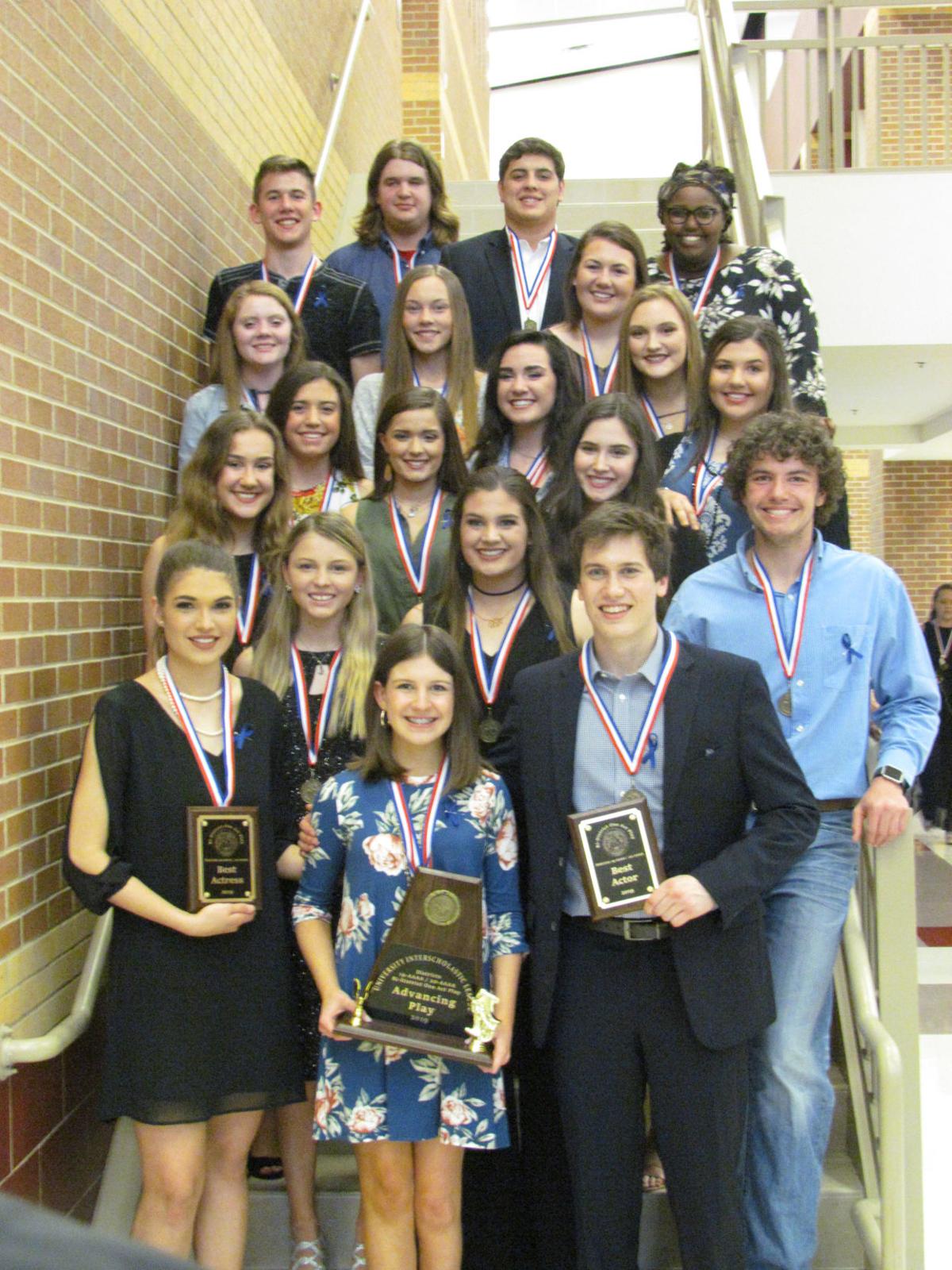 Company of Carthage ISD One-Act Play pose for a picture with their awards after their bi-district performance.

Cast and crew of Gary High School One-Act Play rejoice after advancing to area from bi-district.

Company of Carthage ISD One-Act Play pose for a picture with their awards after their bi-district performance.

Hours and hours of rehearsal, a number of clinics and time spent on in-depth character analysis has lead the Gary and Carthage theater kids to where they are now: finding UIL One Act Play success.

“This is the best show I’ve ever been a part of,” said Cade Coligan, a senior at Gary High School who was voted ‘Best Actor’ for his lead role as Raskonikov in the school’s production of “Crime and Punishment” at district and bi-district. “This is the most committed cast I’ve ever seen at Gary High School... I’ve always been involved with the cast, like since I was old enough to have memories, and this is really like, I can honestly say this is the most committed... probably most talented group that we’ve ever had come through Gary.”

To prepare for their roles, students at both Carthage and Gary said they spent significant time doing character analysis.

“What it took to prepare for Smee is Ms. Funderburk gave us a killer characterization analysis packet,” Carthage High School junior Rade Griffin said. “It’s filled with many questions, and we go through the script and analyse it and break it down, and from that we can learn how he acts, how he talks and all that.”

“There’s a lot of character analysis that goes into it,” Gary sophomore Dylan Essery, talking about his role, said. “I had to really figure out who this character was because he doesn’t really describe himself too much because it (the play) mostly focuses on Raskonikov, and I had to work a lot with tactics. Basically Porfrey has to be more manipulative of Raskonikov to get him to confess and stuff, and it’s a gradual making him break down throughout the show.”

Coligan said he went a little further than just the lines given him.

“I had to go through and read and memorize the first lines and go through the different cuttings (of the script), understand how my objectives and my tactics change with different lines being cut and different lines being added in,” he said. “I actually went back and I got the novel for “Crime and Punishment,” and I went through and read that just so I could have better grip on the world that it takes place in.”

Carthage and Gary have even collaborated in some ways.

“We’ve got a really good partnership with them,” said Michael Powell, director of Gary Theater and principal at Gary Middle School and High School. “We did an East Texas collaborative, we call it, where Beckville, Carthage, White Oak, Longview and Gary all got together and performed shows for each other and critiqued each other’s shows, and so we were able to see “Peter Pan” in clinic, and then they did really well and they were helpful... So I’ve really enjoyed the partnership with them; they’re great.”

Both schools have spent hours rehearsing — Powell estimated about 200.

Kimberly Funderburk, director of Carthage High School’s theater program, cited the advice given to her when she was in high school doing theater.

The Carthage kids even gave up their spring breaks for the play, Funderburk said.

“Now granted we did fun things, but they sacrificed too,” she said. “I mean they were having to do fun things with their theater family, not their blood family or friends or other, outside of theater friends.”

The leads of both plays have worked hard to portray their characters.

Carthage junior Rhett Goldman, who portrays Peter Pan and was named Best Actor at district and bi-district competitions, said his role was a physical one.

“So just getting used to running around and still projecting and articulating,” he said. “And I watched a lot of different versions of Peter Pan also, since it’s such an iconic character... I really like just being able to put everything you can into it and getting to see people’s reactions, and it’s really great to work with people, like working with Savanna Gwinn who plays Wendy, she’s been absolutely fantastic this year, and it’s great to work with the people, I’d say (that) is the best part.”

For Coligan, his role was a bit more stressful than usual.

“With a normal role, it’s usually just very fun and freeing; you get to put on a show and play a character, and it’s really nice and fun,” he said. “With the role of Raskonikov, the deranged ax murderer who has two personalities depending on which part of the play we’re in, whether it’s a flashback or whether it’s after he commits the murders, it’s really stressful. So we do this motif where I start the show with heavy breathing, and that’s all the audience can hear at the start of the show. The lights are down, and all you hear is my breathing really hard out. And I do that several times throughout the show. It’s almost like hyperventilating, so whenever the curtains close at the end of the show, I just have to lay there for a moment and let my blood cells get oxygen or else I’ll pass out.”

Gary ISD has their area competition this Wednesday while Carthage ISD will compete in their area contest this Saturday.

“I am so proud of these kiddos,” Funderburk said. “They have worked so hard, and ... these students give absolutely everything they have to tell this story, and they’re just amazing. Yes, I like the hardware, I like the fact that we have advanced from district to bi-district and bi-district to area, and knocking on hard wood, hopefully we’ll advance from there, but the most important thing is that the kids have told a good story, a good representation of the theater program here at Carthage, and they’ve learned something. That’s what’s more important than the plaque.”

“We’ve had a great year,” Powell said. “There’s about 230 2A shows to start the process, so I mean I’m excited because there’s 48 left, so we’re in the top 20 percent, but Gary has gotten to this level five times in history, so we haven’t made history. So I want to do that, and so I’m excited to see if they can advance on Wednesday... It would be awesome just to advance and know we made school history, and if we don’t advance we know we had a good year, and we enjoy each other’s company, but we would rather advance, and then we’ll enjoy that for about 10 minutes, and then we’ll wanna advance to state. We tend to pretty quickly want the next thing.”

Funderburk said the Carthage students will also perform “Peter Pan” for the public but the date is not yet set.