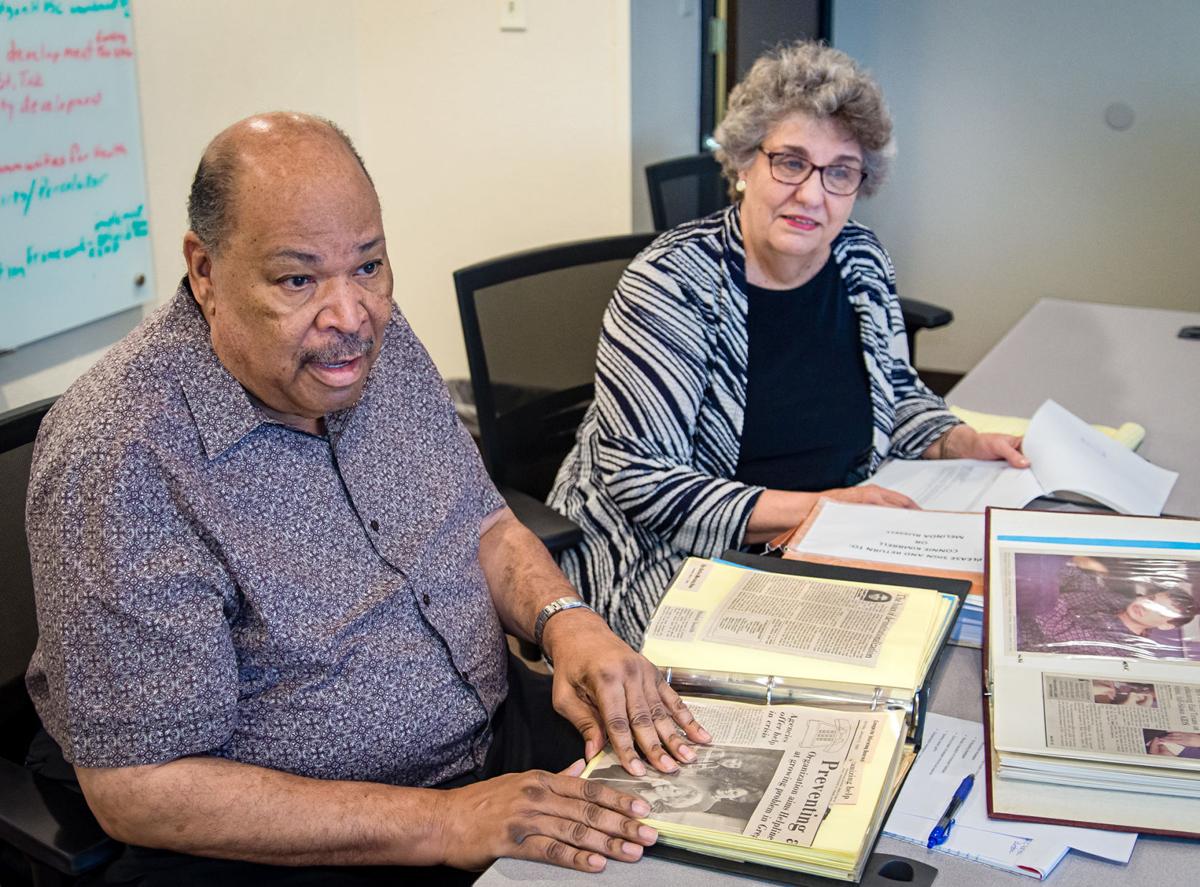 Executive Director Inman White, left, and Director of Operations Marylyn Wyman look through scrapbooks Jan. 2 as they talk about the 50 year history of Community Healthcore. 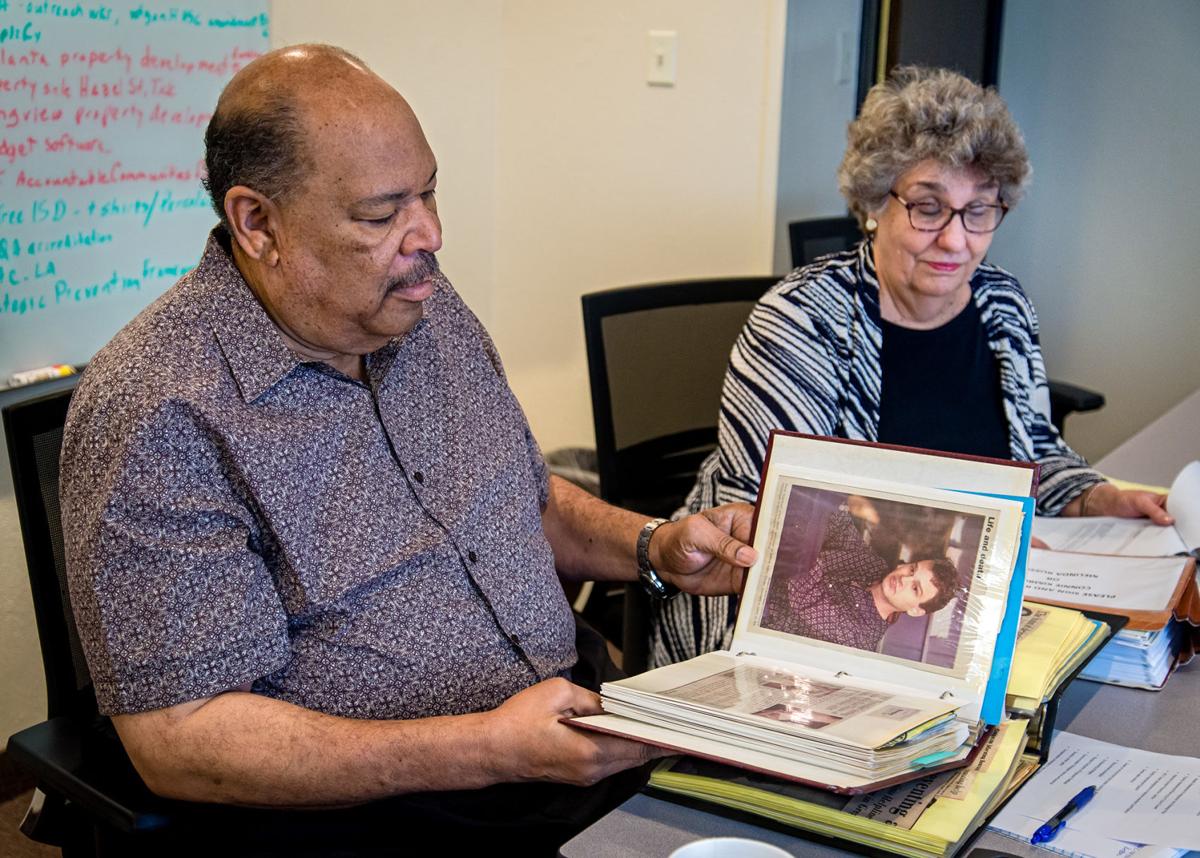 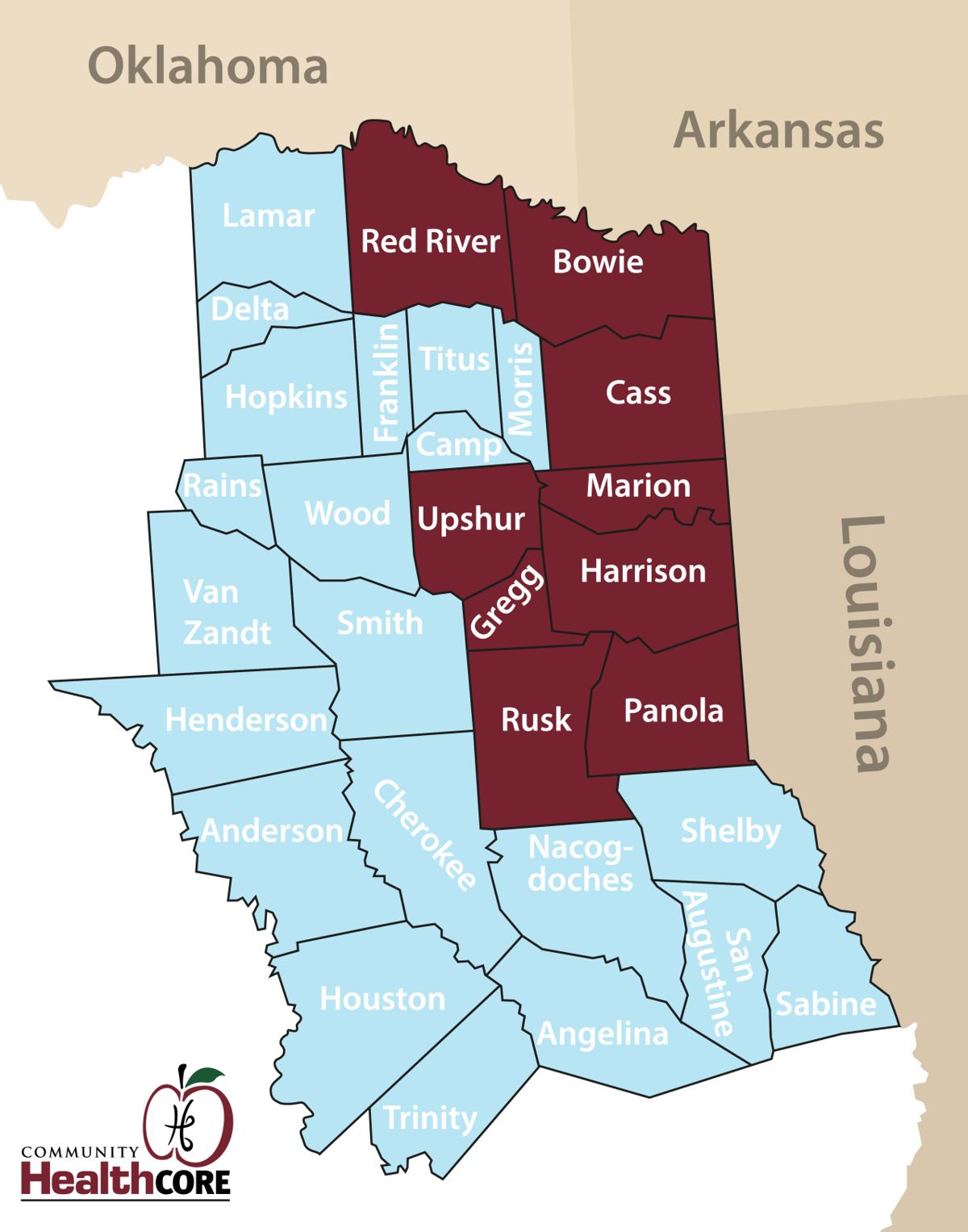 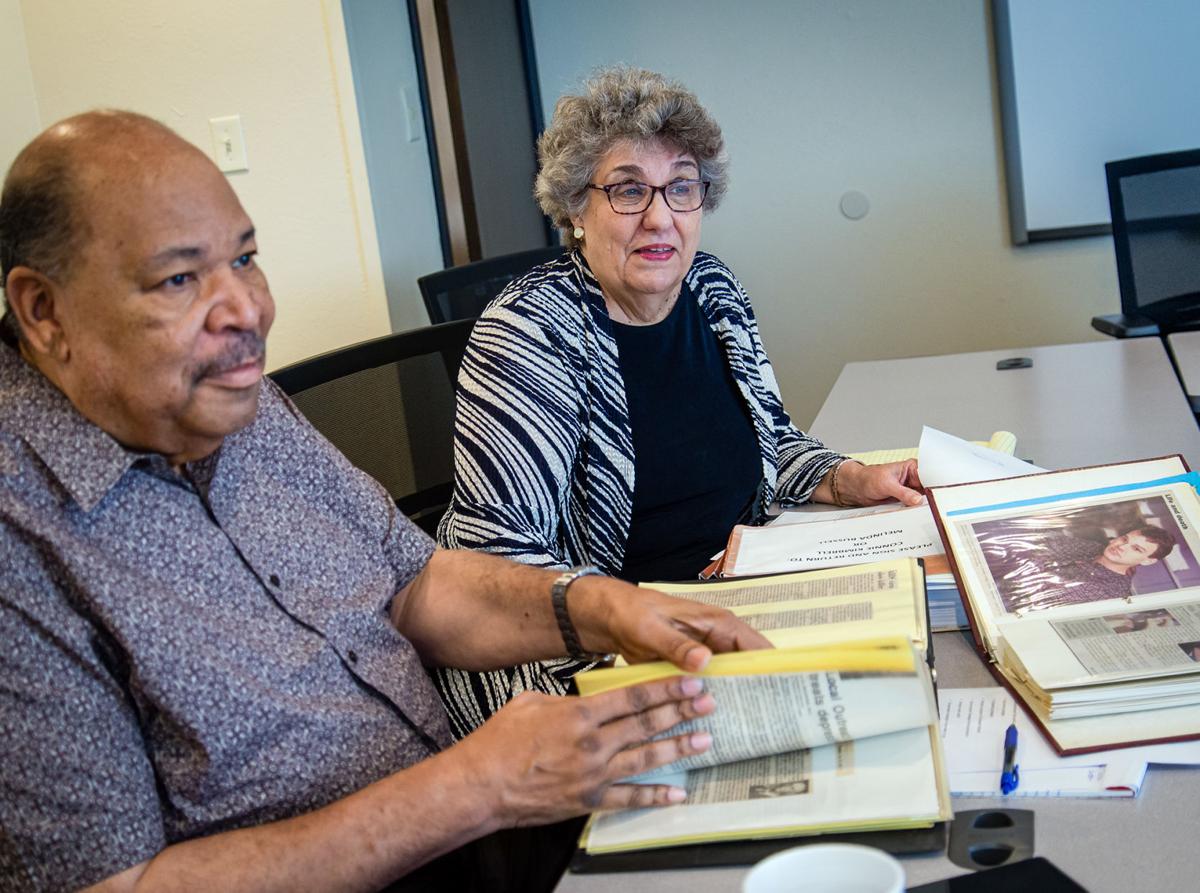 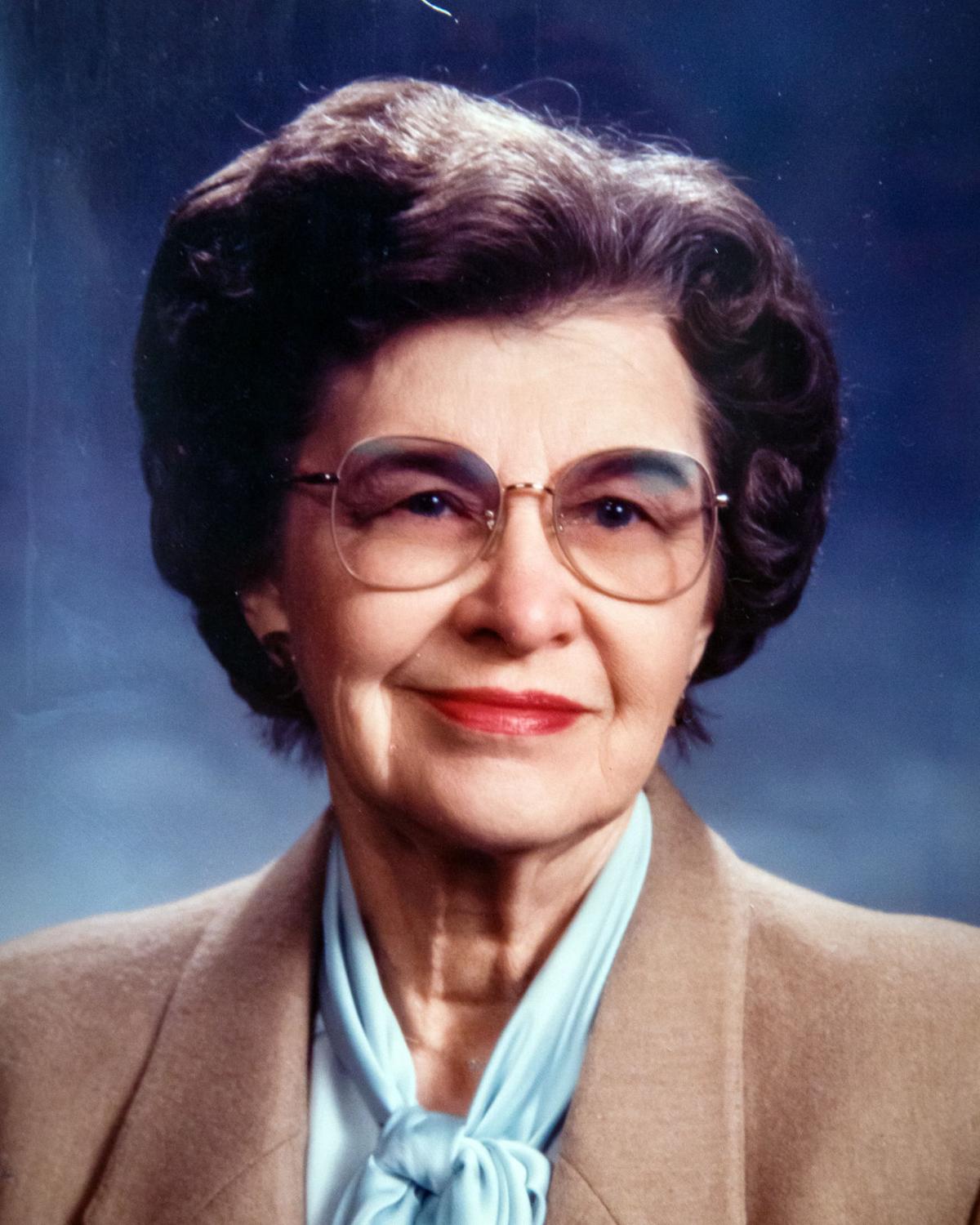 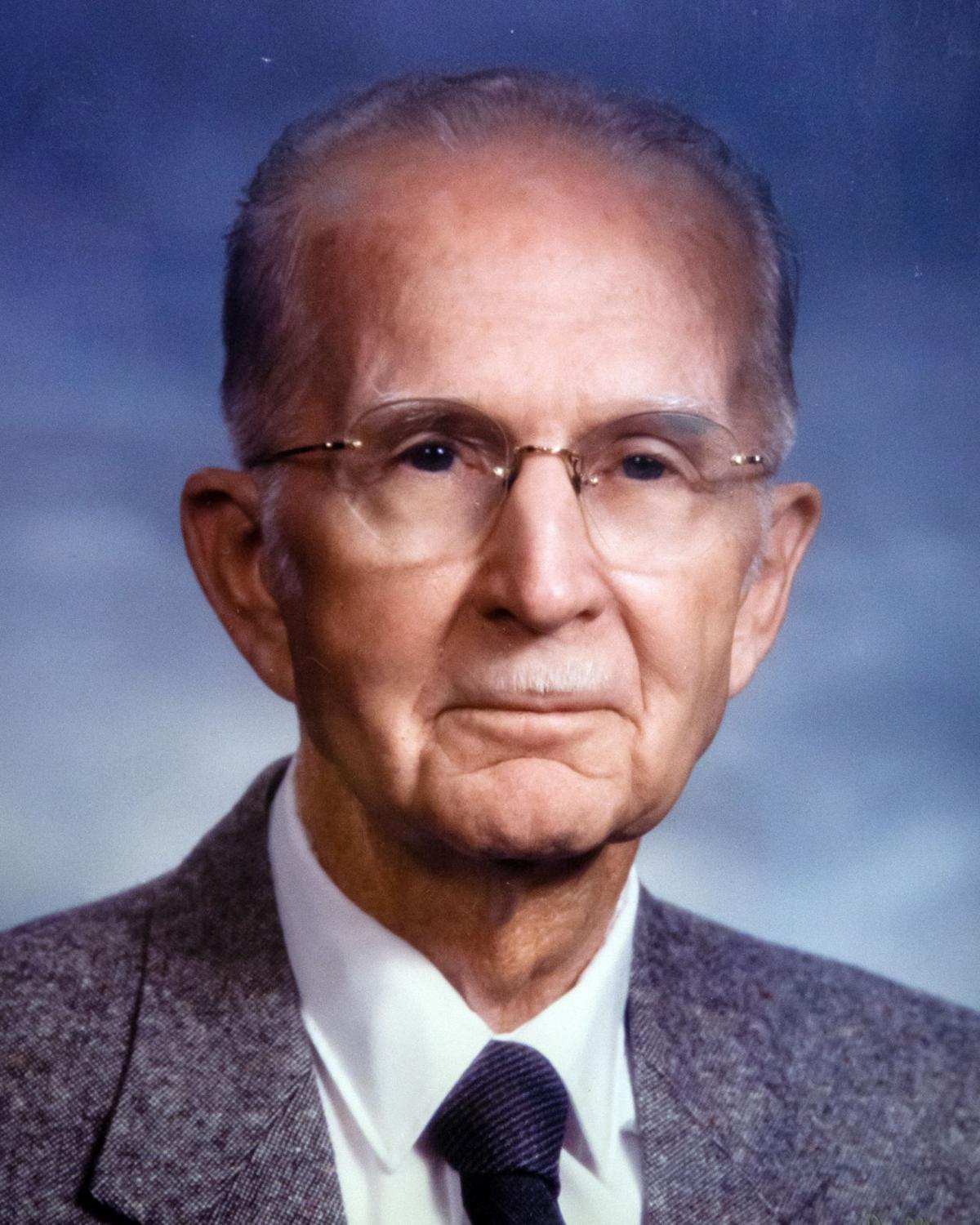 Executive Director Inman White, left, and Director of Operations Marylyn Wyman look through scrapbooks Jan. 2 as they talk about the 50 year history of Community Healthcore.

They’re just the latest steps in the evolution since the organization’s beginnings in 1970 as Gregg-Harrison Mental Health/Mental Retardation Center.

“We are standing on the shoulders literally of the people that founded this place,” Executive Director Inman White said as he thumbed through album books of photos and newspaper clippings of the organization’s leaders, staff and programs through the years.

Through the past half-century, the organization has ridden a roller coaster of funding from state and federal sources, grants, Medicaid or private insurance, donations and fundraising. The ride has increased steadily in the past four years, White said, as state lawmakers have made more money available to serve clients in the 23-county region now served by Community Healthcore, “and we do appreciate that.”

The agency based in Longview serves about 16,000 people a year with a staff of about 450 employees on a yearly budget of $38 million, Business Operations Director Marilyn Wyman said.

There has also been additional state aid in recent years for people who have been on waiting lists for services to get into those services in shorter wait times than in the past.

“I have never stopped thinking of the ripple effect of what it is that we do,” White said of the families, businesses and communities that benefit indirectly from the direct services Community Healthcore provides to clients.

“There are a thousand stories of people who have had second and third chances in their lives to not only overcome illness but to deal with, at times, stigma, to deal with, at times, things that have happened in their lives that have put them on a track to not be able to contribute in any sort of way to become contributing members of society,” White said.

“The impact of illness on the economy alone — let alone the discussion of what it does physically to a person but the complicators of illness — affect many different areas of our lives and our communities,” he continued, “so the numbers are probably in the multiples of four or five to the actual person that we serve when you think of the impact on the families.”

First Episode Psychosis is among the smaller projects Community Healthcore is doing this year.

The idea is to have a more positive effect on outcomes for people ages 17 to 24 who experience their first psychosis.

A psychosis is a severe mental disorder in which thought and emotions are so impaired that contact is lost with external reality. It can occur as a result of a psychiatric illness such as schizophrenia.

Community Healthcore has received grant funding to work with families to find ways to engage with the client and family members to achieve better outcomes, White said.

“It’s a culmination of all of the things that people have learned in the study of probably psychology in the last 40 years around what works and what can you do to intervene earlier in psychosis that can maybe affect outcomes for people that cycle along,” he said.

The agency also plans to work with the Governor’s Office on Mental Health First Aid expansion, in which a central leadership piece will be placed over multiple organizations that work with children.

Gregg and Harrison counties came together in the 1960s to form the Gregg-Harrison MHMR, which opened in the Harrison County Courthouse basement in 1970.

“This was before kids were able to go to school in special ed. Think about the legislation that had to be passed for that to happen. This is before there was any kind of alternative for people to live in a community as opposed to being institutionalized, so there was nothing between illness and institutionalization,” White said. “Think of those periods in time. We’ve come such a long way, and somebody had to start it and somebody had to say this community does not stand for the status quo.”

Eventually, the name was changed to Community Healthcore, and it now serves clients and works with local governments from the Red River south to Lufkin, and from Paris, Canton and Crockett east to the Louisiana state line.

“I think what I recall is that I joined the center without ever having working in social services before,” Wyman said. “What I think is different is how, necessarily through state changes, delivery of services for the center has changed. Even people who are trained clinically to deliver services have learned new ways to deliver services that help people establish their own goals and get better.”

This year, Community Healthcore will undergo a needs assessment handled by a someone experienced in university-level planning, he said.

The assessment is required for the Certified Community Behavioral Health Clinic designation that the agency received recently. Only five community centers in Texas received the designation, which defines agencies that provide a comprehensive range of mental health and substance use disorder services to vulnerable clients.

Designated CCBHC clinics receive an enhanced Medicaid reimbursement rate based on their anticipated costs of expanding services to meet the needs of complex populations, according to the federal Excellence in Mental Health Act.

“That designation I think will move us into the future,” White said, “because when dollars are available — and we think they will be available to fund those kinds of services — I think you’re going to be looking at a different kind of community mental health center.”

Community Healthcore is accredited by The Joint Commission, he said, and Wyman is leading the agency in its National Committee on Quality Assurance certification, which applies to intellectual disability services.

“It really certifies the people that are doing the work that we do with individuals in nursing homes that are receiving services that we are responsible for the development and the plans of care and their transition into different levels of care,” White said.

As for the website, White noted that pertinent information is available on the agency’s current site, communityhealthcore.com, but he wants it to be friendlier to people visiting online.

There are still several obstacles ahead for Community Healthcore, with the obvious obstacle being money.

Administrators also want to grow peer development — meaning that they want local schools, cities, counties, federally qualifying health centers and other agencies to become more involved not just in Community Healthcore programs but also in the planning phases of those programs.

“The challenge is keeping our eye on the ball to move things forward, to not necessarily take any failure that occurs as a reason to go backwards,” White said. “It’s taken us years to get where we are as an organization with peer development and we’re still not where we want to be, where we need to be… We want our peers in our planning processes.”