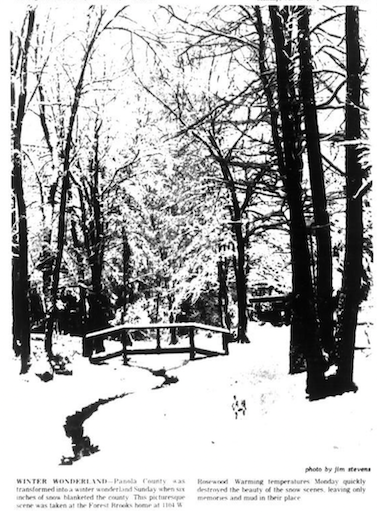 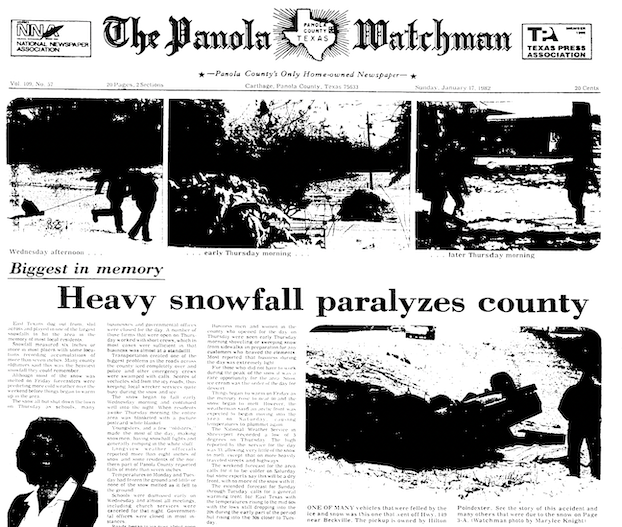 This week’s snow and ice storm was one of the longest and biggest in recent memory for Panola County, but we’ve weathered such storms in the past as well.

We went searching through the Watchman archives for stories and photos from past snowstorms and found some gems:

The six inches of snow that fell the week of Jan. 17, 1982 was the biggest in memory and paralyzed the county, the Watchman reported.

“Transportation created one of the biggest problems as the roads across the county iced completely over and police and other emergency crews were swamped with calls. Scores of vehicles slid from the icy roads, thus keeping local wrecker services quite busy during the snow and ice.”

A photo by Marylee Knight shows a pickup owned by Hilton Poindexter upside down on Texas 149 in Beckville. Other pages in the paper showed off local snow people artistry and talked about the perils and joys of winter precipitation.

“A profusion of ‘snow people’ dotted the lawns and they ranged from your typical ‘Frosty the Snowman’ type to entire snow families, snow sports fans and sculptures. And, in one case, there was even a ‘snow house’ for an icy family,” the Watchman reported, adding at the very end “An igloo to house their snow family was built by Mindy, Ronny and Julie Julian outside their residence at 318 W. Hayden.”

“Storm artist’s dream; a driver’s nightmare” was the headline giving an overview of the 13 accidents, two of which involved school buses, that took place. Thankfully there were no serious injuries.

County officials reported no deaths or major incidents when six inches of snow fell in February 1977. Instead: So many people were talking about the snow, it tied up phone lines.

“It was more than a month late for Christmas, but Panola County got a white winter Sunday when six inches of snow blanketed the ground, turning the countryside into a picturesque world of cold beauty…

“Almost everyone was talking about the snow and that talking caused some problems for Southwestern Bell Telephone Company, both in Panola County and throughout East Texas.

“It took local callers some time to get a dial tone and calling long distance by dialing direct was virtually impossible. But while lines were jammed with calls, the company experienced no significant trouble with equipment.

“According to Frank Boteler, Bell’s wire chief here, the dialtone problem was merely the result of an overload of local telephone calls.”

“TEXAS SWEPT BY WORST BLIZZARD IN SEVERAL YEARS” was the headline in the Jan. 16, 1918 newspaper. North Texas, the Panhandle and even Galveston is mentioned in this story about winter weather that killed several people and hampered streetcars in North Texas. Galveston experienced “a bit of a blizzard” and registered 17 degrees.

“The blizzard hit Carthage Thursday night in the shape of a heavy rain, sleet and snow storm, Friday morning we all awoke to find our little city covered with a blanket of snow.”

The Jan. 27, 1966 in the Galloway News column by Mrs. J.W. Baker discussed a visit from a special guest.

“Old man winter visited the community Friday and Saturday, leaving some snow which soon melted to the children’s sorrow. Saw a snow man on top of Scooter Baker’s car. To some it was the first time to see snow, such has little Claudia Eloise Foshee, who looked out the window at the large flakes falling and brushed the top of her head thinking they were falling on her.”

And in the Jan. 18, 1973 paper, the Watchman ran a photo of a snowman that had cropped up in a parking lot.

“BIG WITH THE GIRLS — A five-foot snowman on the White’s Auto Store parking lot was the center of attention for these store employees, who may have melted him with their affection. The girls include, from left, Debbie Humbler, Loretta Carter and Vickie Harvey. Frosty was built by several persons, including Steve Teer, who did most of the work.”