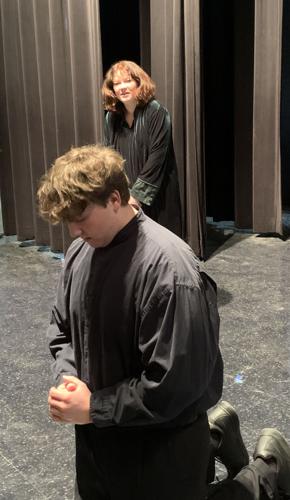 Hailey Essery as Colleen and Brady Balfanz as the character Matthew are both in the Gary High School drama production class production of “100 Saints You Should Know.’ 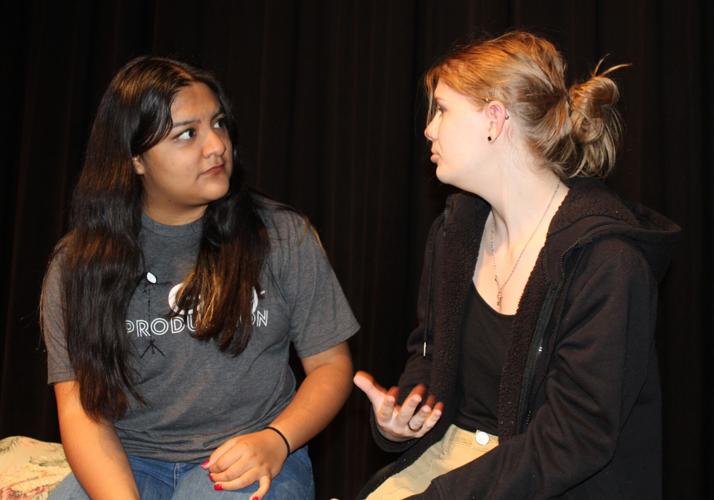 Michelle Montealvo as Teresa, left, and Katie Thomas as Abby are seen during a Monday rehearsal for “100 Saints You Should Know.” 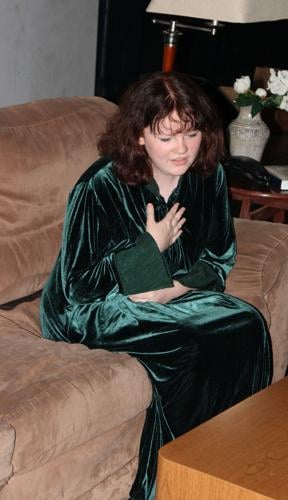 Hailey Essery plays the role of Colleen in the Gary High School drama production class production of “100 Saints You Should Know.” 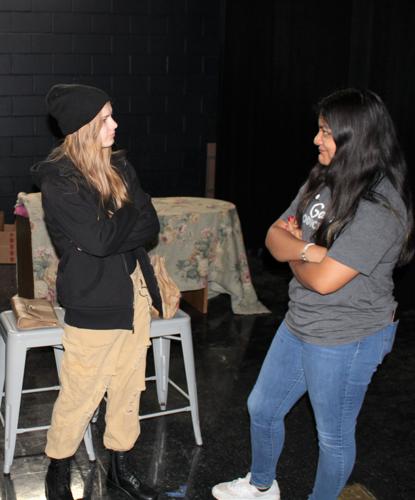 Katie Thomas as Abby, left, and MIchelle Montealvo as Teresa, are seen during a Monday rehearsal for “100 Saints You Should Know.”

Hailey Essery as Colleen and Brady Balfanz as the character Matthew are both in the Gary High School drama production class production of “100 Saints You Should Know.’

Michelle Montealvo as Teresa, left, and Katie Thomas as Abby are seen during a Monday rehearsal for “100 Saints You Should Know.”

Hailey Essery plays the role of Colleen in the Gary High School drama production class production of “100 Saints You Should Know.”

Katie Thomas as Abby, left, and MIchelle Montealvo as Teresa, are seen during a Monday rehearsal for “100 Saints You Should Know.”

Pitting teams of high school students against one another in competition may be more reminiscent of sports like volleyball, football or basketball, but Gary High School drama instructor Michael Powell sees benefits of that competitive spirit for his theater students.

That is why Gary PlayFest returns this week in multiple performances leading up to a grand finale Saturday night when independent judges will be on hand along with audiences to recognize the top cast of three separate plays.

Admission each performance time is $5 per person.

Powell said the themes of the three productions are intense and not recommended for students younger than 10 years of age.

PlayFest was initially established last year to help prepare a group of students who mostly did not have much theatrical experience to gain a stage presence before they embarked on the highly competitive one-act high school play season in the spring.

“It solved a problem last year that we no longer have,” Powell said. “The problem was that last year out of 14 people, I think eight of them had never been in a one-act play contest.”

He wanted to give them that on stage experience before they ventured into one-act competition against other schools.

“It went well, and so we made it an annual thing,” Powell said. “There are three shows and we bring in impartial judges.”

The judging competition starts at 6 p.m. Saturday as the casts of “One Hundred Saints You Should Know,” “Women of Lockerbie” and “Jesus Hopped the A Train” take stage in back-to-back in performances. But the performances in front of judges come after each troupe has performed a total of three times.

Thursday and Friday evening and Saturday afternoon will be rotating performances, with each show’s cast having a performance before audiences.

“Saturday night we’ll probably have like 200 people” attending based on last year’s PlayFest, Powell said. For each of the prior performances, smaller audiences are expected for shows he classified as being between dress rehearsals and performance where the players “are still sorting things out” before going before judges.

“The experience is great and the money goes toward their New York City trip,” he said. “Every other year we take a trip. It’s a good fundraiser, but primarily it’s for the experience of the contest setting and we’ll have an awards ceremony at the end where acting awards are given and we announce the winning play.”

Among the awards will be a fan favorite selected by the audience.

The NYC trip is open to all students in Gary High School’s theater production class with an estimated cost per student of $1,500.

“So the more people that come out and support our shows, the less each student has to pay out of their own pocket,” Powell said. Those making the trip will attend professional theater productions and take in other sights, he said.

Becka Smith, senior, said while this is her first year in drama, she is excited about the opportunity participation brings. She is on the cast of “Jesus Hopped the A Train” play.

“It has a really good message,” Smith said.

Tailor Willis is in the cast of “Women of Locerbie,” which tells a story of efforts of a woman wanting desperately to return clothing and personal belongings to surviving family members from victims who perished in plane crash in Locerbie, Scotland seven years previously.

Sid Burgess, who takes on the role of Bill in “Women of Lockerbie,” said emotional battles ensue between a government bureaucrat, a married couple whose wife wants any remnants from her child who was killed in the plane crash while her husband who feels the idea is only dredging up bad memories and driving his wife to the verge of insanity.

June LaGrone is also in the cast and said audiences should be able to pick up on foreshadowing details revealed as the play develops which may point to how it will end.

Jesse Goodman takes on the role of Officer Valdez in “Jesus Hopped the A Train,” and said his character is intolerant of anyone who breaks society’s rules. However, working as a prison guard, he is constantly confronting those who have broken the law.

Jesse Dodge plays one of those law breakers in the character of Angel.

“He’s a gangster who values loyalty,” Dodge said of Angel. He loses a friend to a cult and shots the cult leader in what he feels is a justified killing. That sets up a variety of confrontations as he seeks sympathy while also feeling conflicted.

Dodge said he enjoys being able to use slang and preparing for his role in the mind of a gangster.

Saturday 6 p.m., all three shows will compete before judges, with the evening expected to conclude about 8:15 p.m.