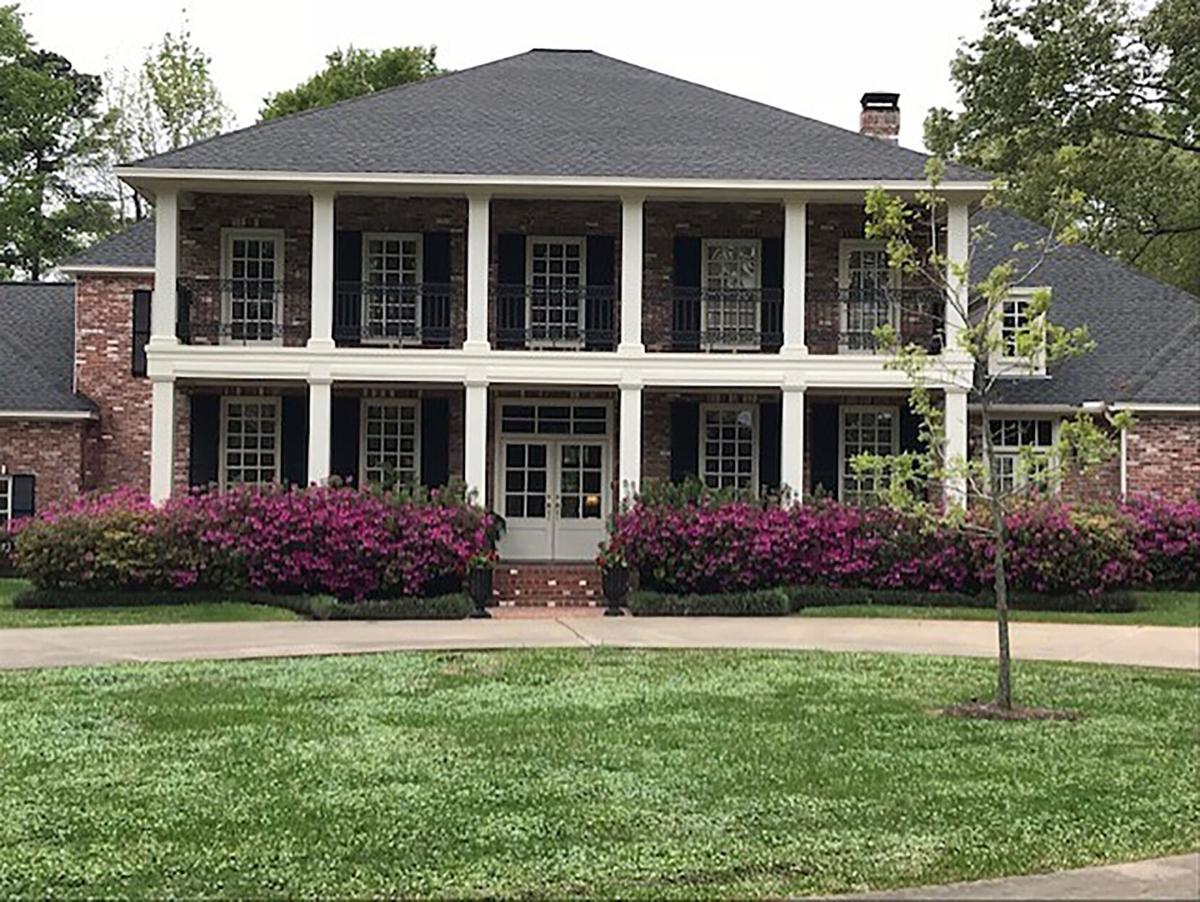 This year’s Christmas Tour of Homes includes the Moss House.

This year’s Christmas Tour of Homes includes the Moss House.

The beautiful southern traditional home of Robert and Mary Ella Sherman is a feast for the eyes both outside and inside. The beautiful landscaping in both the front and back of the house is designed and created by Robert, who enjoys both the labor and the results of the labor of working with plants. The large front entrance will be decorated with live wreaths, holiday greenery and berries, and the front balcony will be decorated with lights.

The centerpiece of the dining room table and focal point of the room will be a table-top tree made and given to the family by Robert’s stepmother several years ago. The tree is covered in lights and small old-fashioned vintage ornaments and came from the gift shop she owned in Waco for many years. Wooden snowman and Santa Claus ornaments, also gifts from her from the shop, will be placed around the tree, along with greenery, berries and other natural elements. The table topper with felt appliqued and sequined figures was made by Mary Ella’s mother, Mary Lu Davis, and her late grandmother, Mildred Watkins, both accomplished and creative seamstresses.

In the den will be a large green Christmas tree with handmade ornaments also made by Mary Lu. Mary Ella says, “Because she has downsized Christmas at her house, and my family — and therefore our celebration together — is getting bigger, she has also already passed many of her own ornaments to me so that we can all enjoy them.” The ornaments are made of velvet, beads and sequins and include Christmas stockings and decorative balls, bells, kitty faces and myriad other items. Visitors will also see a set of angel ornaments she made from remnants of the velvet she had used to make Christmas dresses for Mary Ella’s daughters. Ornaments, mostly made of glass and purchased from various places the family has traveled, will be another highlight of the family tree; Mary Ella tries to purchase a souvenir ornament from every travel destination.

The mantle will repeat the use of greenery, berries and other natural elements and will feature special needlepoint stockings made by Robert’s late mother. Robert’s was his childhood stocking, and his mother made one for Mary Ella when they married, followed by one for each of their children — Davis, Lainey and Kate.

Decorations in the den and living room will also include a collection of snow globes; some of them were gifts to the children from their grandmother, and others were collected in the family’s travels. Also featured will be a homemade gingerbread house, traditionally made by the children and grandchildren, surrounded by a collection of small felt cats and woodland animals with detailed faces made by Mary Lu more than 30 years ago. Several elves about 18 inches tall made of velvet will also be set out around the living areas, and on the piano will be the family’s extensive nutcracker collection — mostly gifts from Mary Lu to her grandchildren — of all sizes and colors and styles.

A Christmas quilt will cover the breakfast room table; the centerpiece will be an arrangement featuring greenery and berries to complement the mantle decor. French doors along the back wall of the den will allow visitors to view the covered back porch and the outdoor kitchen, a separate structure located beside the backyard swimming pool.

When Bill and Mary Moss decided to move to Carthage from Houston after his retirement in 2016, they had another decision to make — whether to build a home on the family farm in Long Branch that had been an important part of Bill’s childhood and was the main attraction for them to move to East Texas or to build or purchase a home in town. Because they were so accustomed to living in a neighborhood with people around them, they decided to look in town first and chose the beautiful brick and stone house that is now their home. They have not been disappointed, both sharing how much they have enjoyed the friendships they have made here and how great they have found the people to be.

Bill says he has been drawn to East Texas since he lived in Tyler during his elementary school years. His grandfather had a place at Lake Murvaul, and his father purchased the farm in Long Branch, so he spent a lot of time in the area.

“When we lived in Tyler, my family came here nearly every weekend,” he says. “I have such great memories of feeding the cows and riding horses to pen the cattle, and I have always known I wanted to come back here!”

Bill continued to spend many weekends at the ranch helping his father while he was working in Houston. His parents moved to Henderson when his father retired from his Houston job to be close to the ranch.

“The ranch then became his job!” says Bill. “He was still on the tractor at age 90. I understand his love for it because I still go there all the time and still enjoy working out there, building fences, vaccinating cattle, and all the other never-ending jobs!”

Mary enjoys working with him at the ranch and feels a similar draw to East Texas. Both of them are enjoying the downsizing and the slower pace of life since their move from Houston and especially do not miss all the city driving and traffic that was their everyday custom there.

The Moss home has two beautiful visible entrances, one in front and one on the side. The front entry has a double glass door with a wreath of Christmas greenery and a plaid bow on each and poinsettias adorning the front porch. The dining room to the left of the entry will feature a Christmas centerpiece with traditional holiday greenery.

Other Christmas decorations placed around the home include ones from a collection of Santas, angels and snowmen, as well as a nativity set. Poinsettias will also be seen throughout the home, as well as decorations on the landing where the stairs turn to go to the upstairs bedrooms.

The living room and the master bedroom next to it both feature a wall of beautiful French doors leading to the back yard. In the living room, there is a fireplace with a large wreath made of traditional greenery, berries and bells on the mantle. Mary’s mother made red felt stockings many years ago for Bill and Mary and their two sons, Sam (now 38) and Thomas (now 34); the boys still have theirs in Houston, but Mary’s and Bill’s continue to be hung here every year.

Near the fireplace will be the main Christmas tree. The angel on top was made for Mary by a dear friend of her mother’s from Mary’s wedding dress. Other special ornaments include a red rocking horse Mary and Bill bought on their honeymoon 44 years ago, ones that their parents brought them from overseas (including ones from England, South America and parts of Asia), and crystal ornaments given to them by Mary’s mother that she collected during her long years as a volunteer in the Methodist Hospital gift shop.

Many of the wooden furniture pieces in the home were made by Mary’s father. On one of the tables is a mantle clock given to her great grandfather when he retired in 1929, and deep beautiful sounds can be heard from the grandfather clock that belonged to Bill’s father.

The kitchen has a center island and is open to a breakfast and sitting area that leads to the side entry from the outdoors. A special watercolor painting of Mary’s childhood home hangs in this area, and on a table in the side entry is a Christmas tree made of gingham that Mary has had since college, special to her because the mother of her little sister in her sorority made it for her.

An office filled with personal family memorabilia completes the downstairs portion of the home.