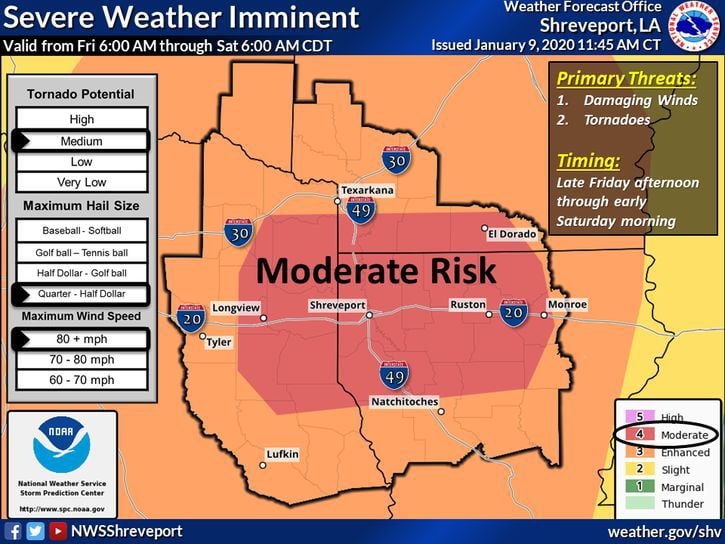 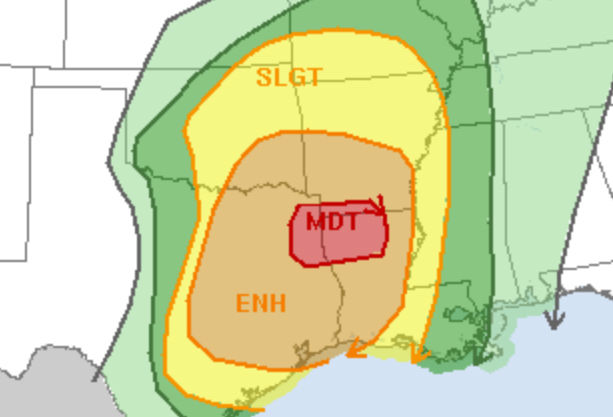 The threat of severe weather Friday has been upgraded to a "moderate risk," which is the second-highest, the National Weather Service said Thursday.

The NWS is preparing for a significant and severe weather event that could begin as early as 3 p.m. for much of the East Texas region, according to an online weather briefing from Meteorologist Matt Hemingway.

Storms are expected late Friday through Saturday morning, with the possibility of damaging winds, tornadoes, large hail and flash flooding.

Panola County is listed under the "moderate" risk, which means widespread severe storms are likely, and they could be long-lived, widespread and intense.

Hemingway said the NWS is looking at the possibility of storms developing ahead of the line beginning around 3 p.m. through much of the region, including Panola County. These storms could produce tornadic activity.

"Those are the ones that we'd be most concerned about producing tornadoes, really the strong tornadoes that would be on the ground for a longer periods of time," Hemingway said, adding "We are looking for very warm temperatures tomorrow in the mid-70s for highs across a good part of the area, and in addition to that we've got all this moisture coming back north from the Gulf of Mexico in advance of this system, so we'll have plenty of moisture in place, plenty of heating out ahead of it that's why we're really concerned."

The main storm line, which Hemingway said is expected to a line of very strong storms, is expect to hit Tyler and Longview between 6 and 9 p.m., getting to Carthage between 9 p.m. and midnight.

"We actually think the winds will probably get stronger as we get through the evening and into the overnight hours," he said.

Hemingway warned that the NWS is predicting the storms to last several hours overnight, and that the threat of tornadoes won't really end as the night begins.

Rainfall is a secondary threat, Hemingway said, noting that several areas north of Interstate 30 are already under a flash flood watch. Supercell storms throughout the region could produce 1-2 inches at a time, he said.

If a tornado warning is issued, Hemingway said the best place to be in your house is a room on the lowest level and near the center part of your house away from windows, preferably a closet or bathroom.

Those living in a mobile home are encouraged to make a plan and have an alternate place to go.