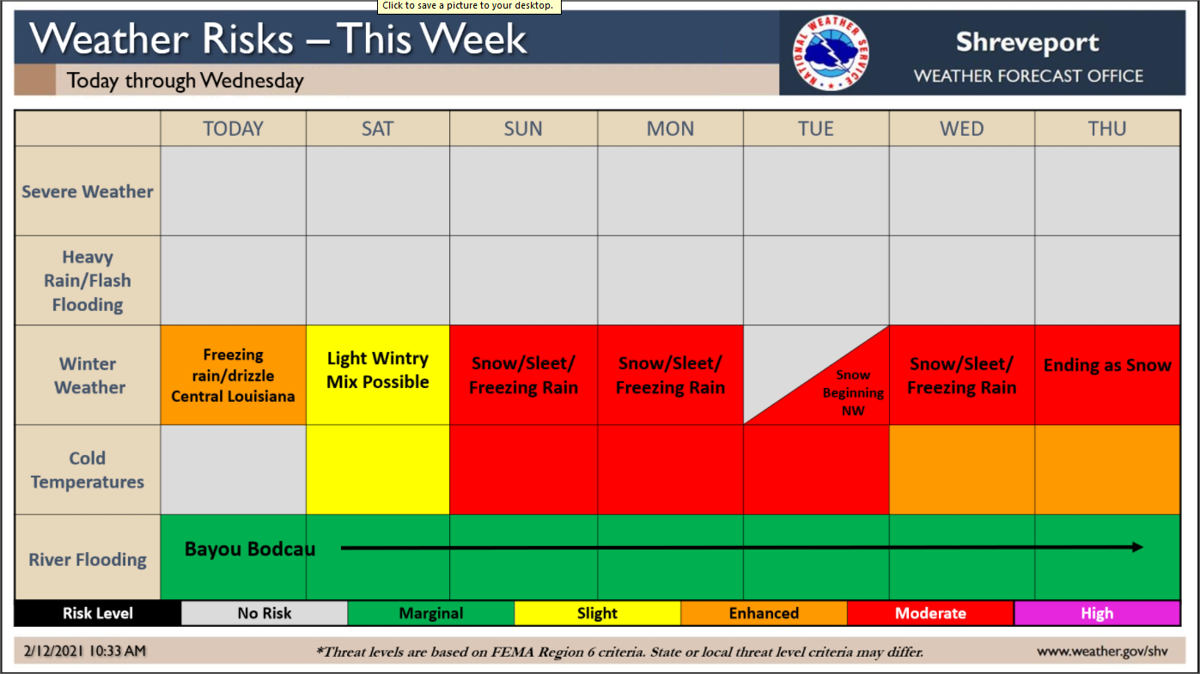 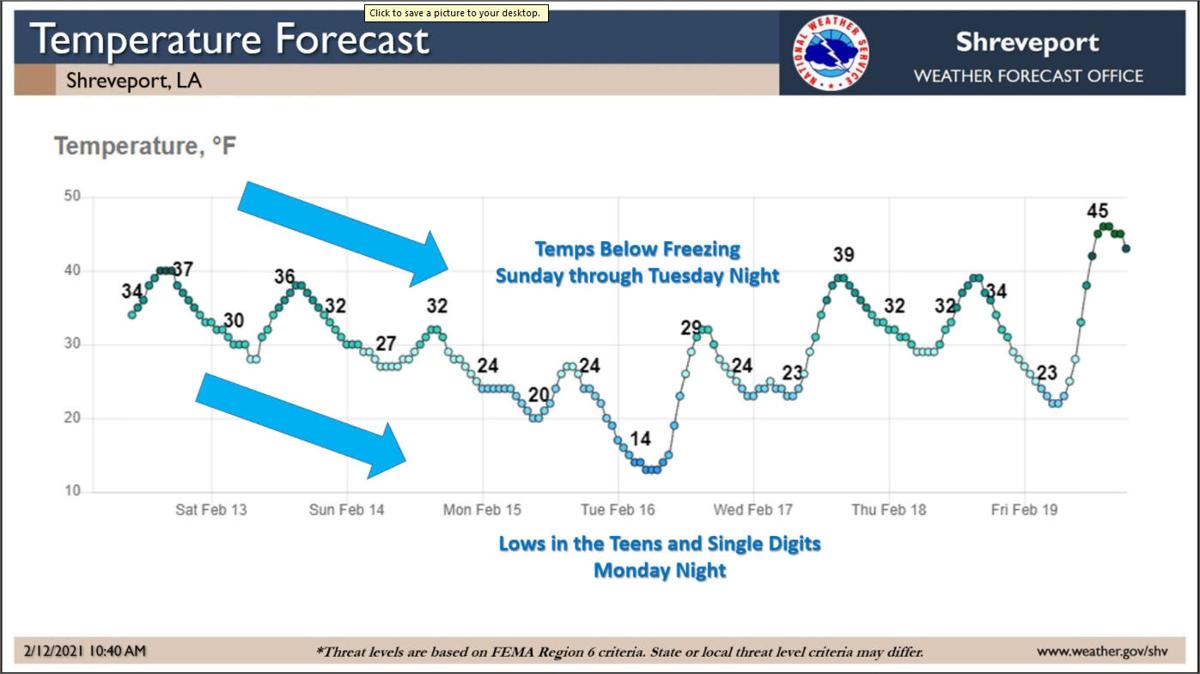 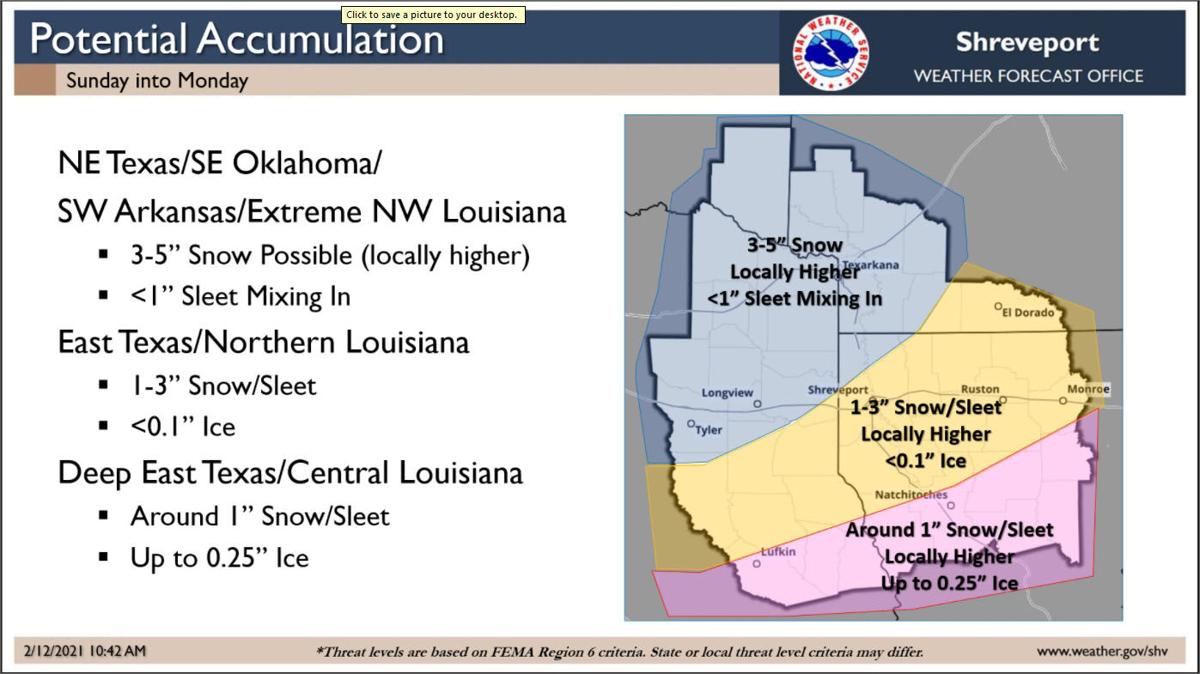 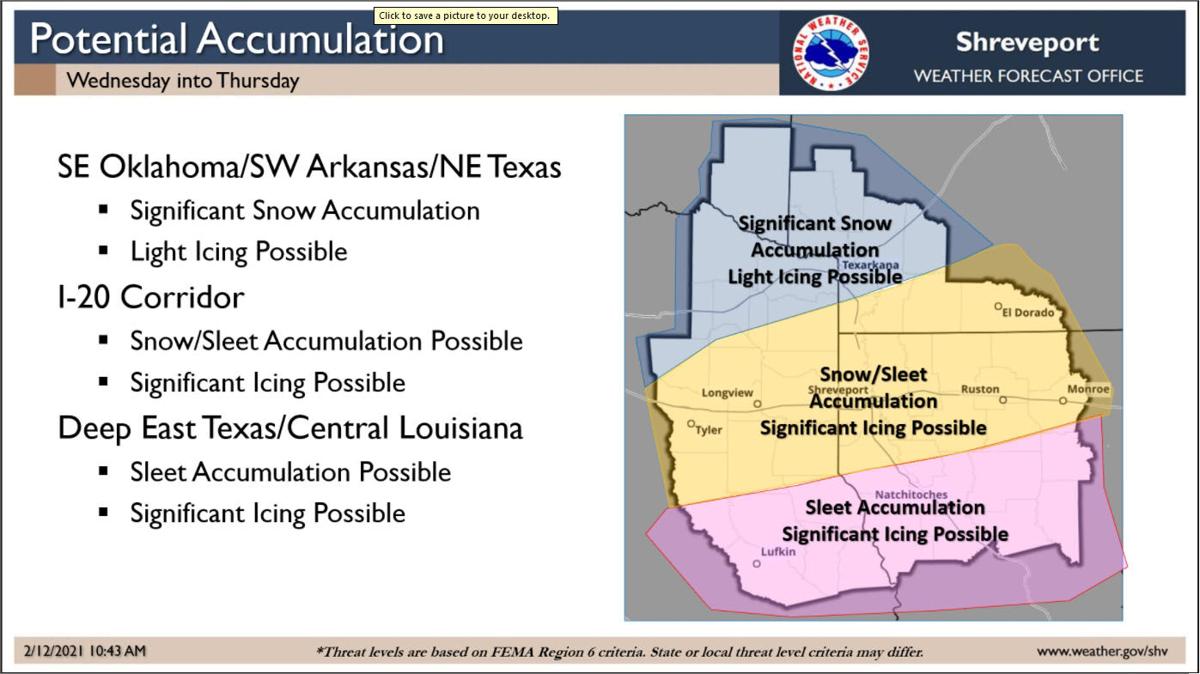 East Texas should expect bad road conditions and area power outages next week as two rounds of winter weather hit the region in the coming days.

The National Weather Service says it’s also going to be cold: Temperatures could get down to the single-digits on Monday and won’t rise above freezing all that much — if at all.

Meteorologist Charlie Woodrum explained the timing and expected impacts of the storms in a weather briefing Friday morning. Woodrum says the NWS saw some ongoing light freezing rain in the area Friday morning and the possibility of a very light mix of sleet and some freezing rain Saturday in Central Louisiana.

But the first major, region-wide storm will begin arriving Sunday as an arctic air mass filters into the area and brings even colder temperatures. Sunday morning should see some sleet and freezing rain across the area, with snow in portions of the northwest part of the region.

By Sunday afternoon and evening, a wave of precipitation comes through, and by Monday morning the area should see heavier precipitation of sleet and snow come in, Woodrum said.

That will switch to snow or heavy snow Monday afternoon into night, Woodrum said.

The region should get a break on Tuesday from precipitation, Woodrum said. But another round of winter weather will hit Wednesday and Thursday.

Temperature will be a big concern, Woodrum said, because it means the winter precipitation we do get will accumulate. Monday night is expected to be the coldest night, with temperatures down into the single digits in some areas.

“As advertised, temperatures are going to continue to fall,” Woodrum said, adding they would “not even really get above the 40 degree mark across all of our area for quite a while.”

“We might actually remain below freezing starting on Sunday and going all the way to Wednesday,” he said.

Woodrum said the NWS has been watching soil temperatures drop as well: It was 50 degrees on Wednesday, 44 degrees last night and 41 degrees this morning.

“With that colder air moving in, we’re seeing the soil respond to that and it’s on its way,” he said.

Woodrum said it was still too far out to say how much accumulation the area will see in the second winter storm. Regardless, Woodrum says the NWS expects big impacts to area roadways and power outages from weighed-down limbs and branches.