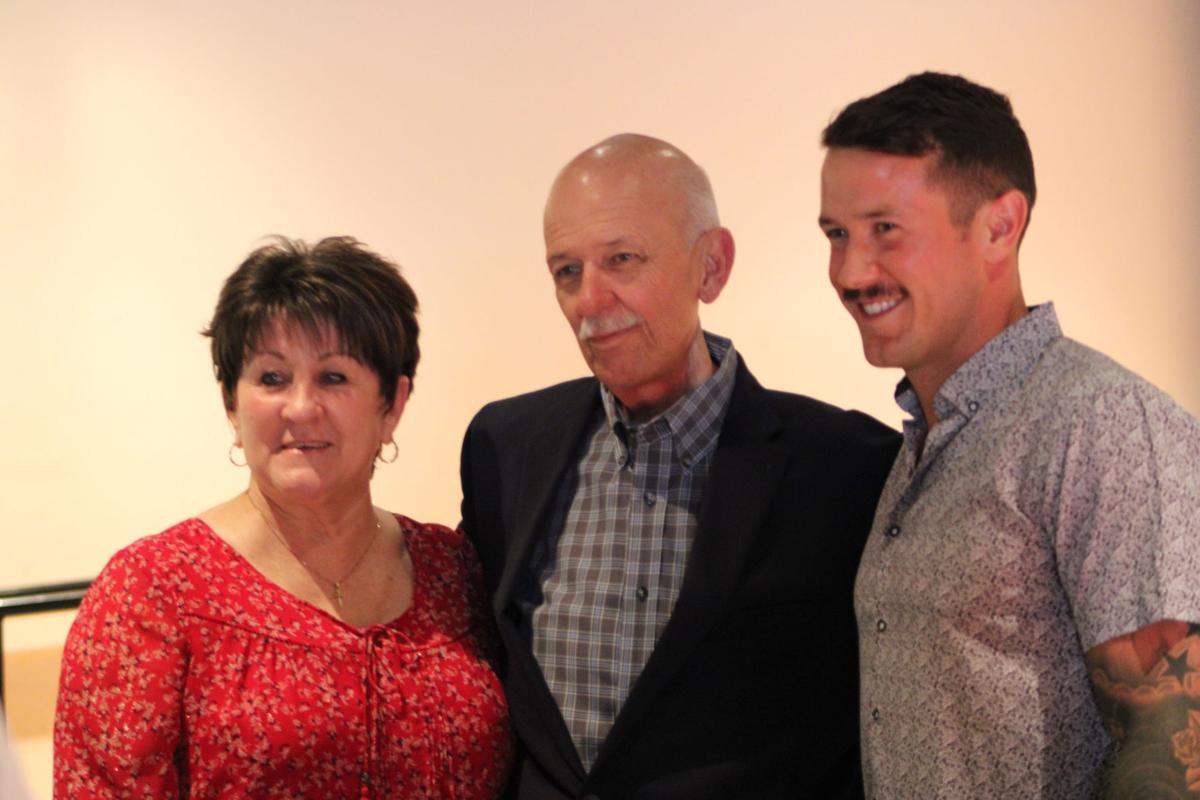 A retirement reception for Carthage Police Chief Jim Vanover was held Tuesday at the Texas Country Music Hall of Fame. Vanover retired at the end of May and was succeeded by Blake Smith. 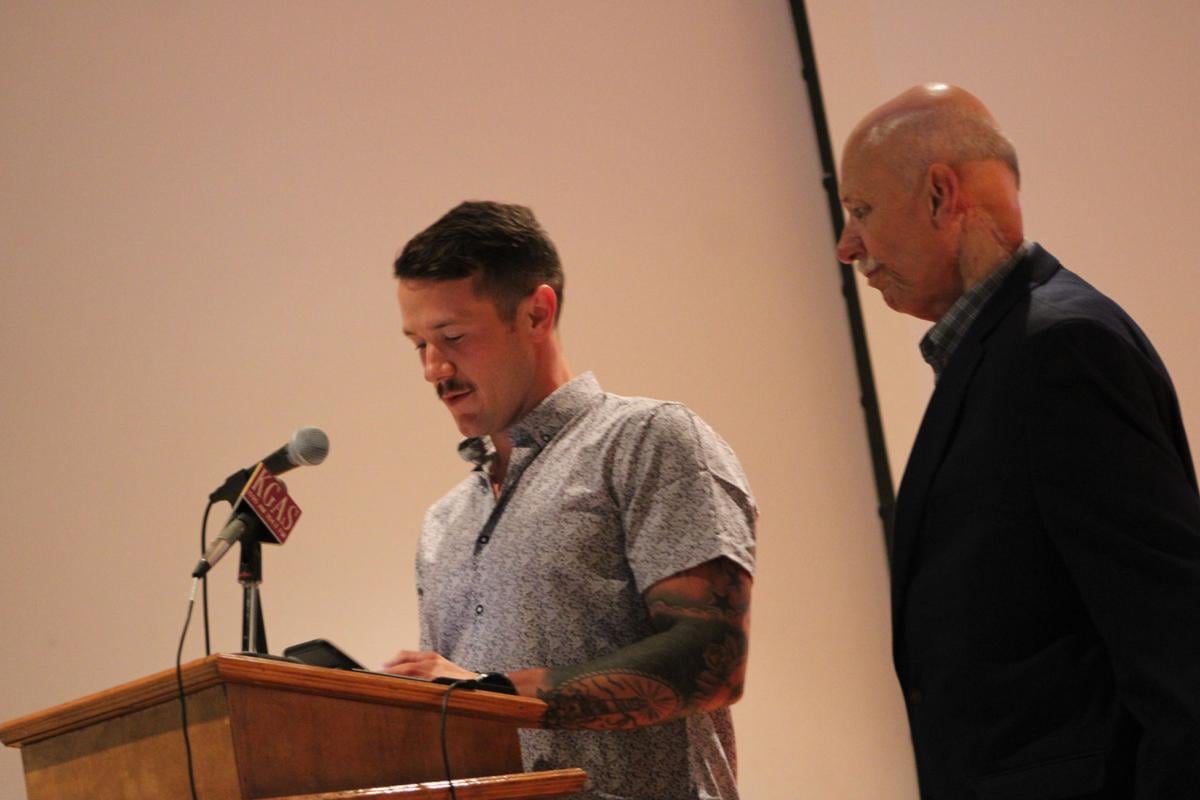 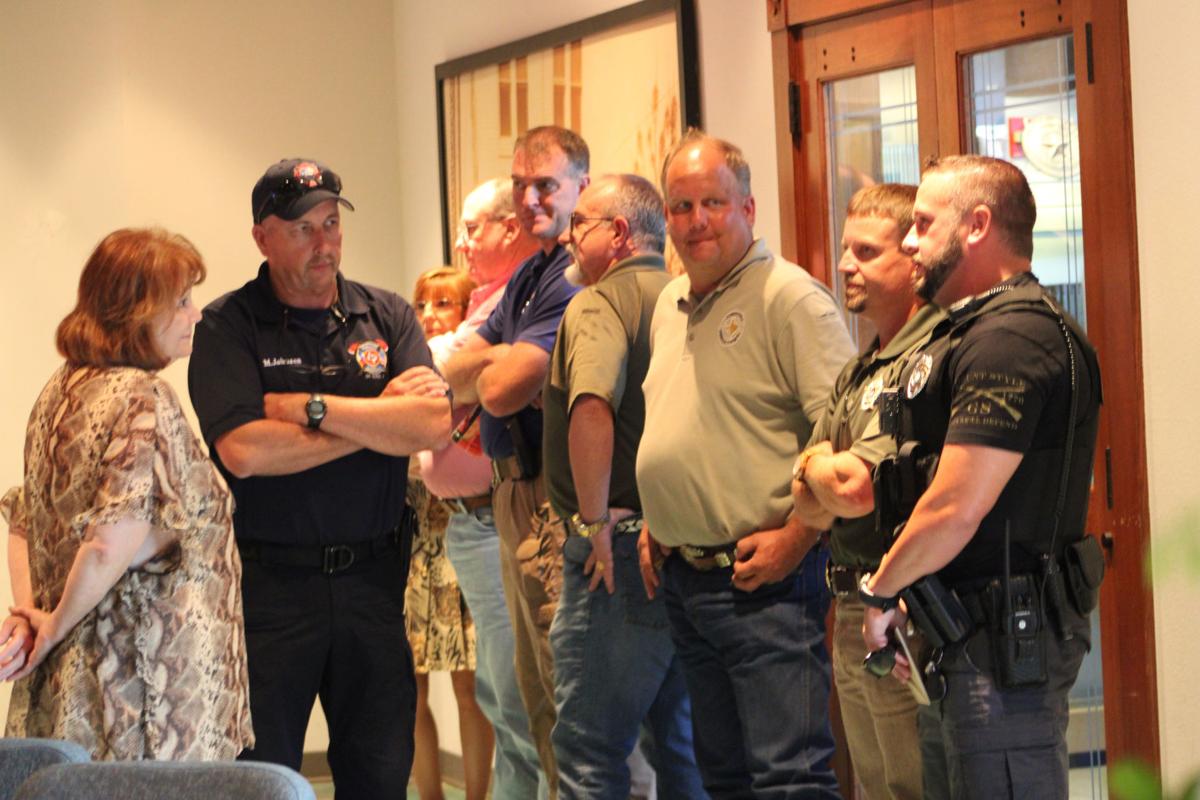 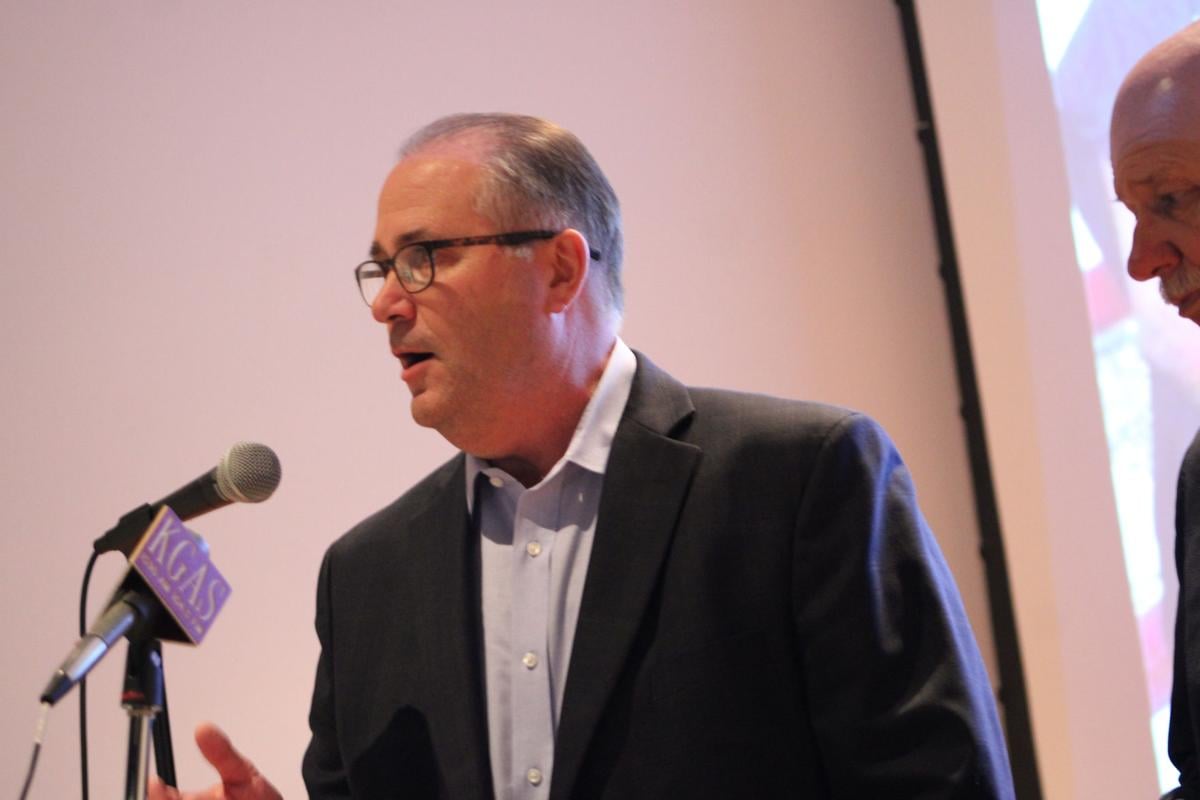 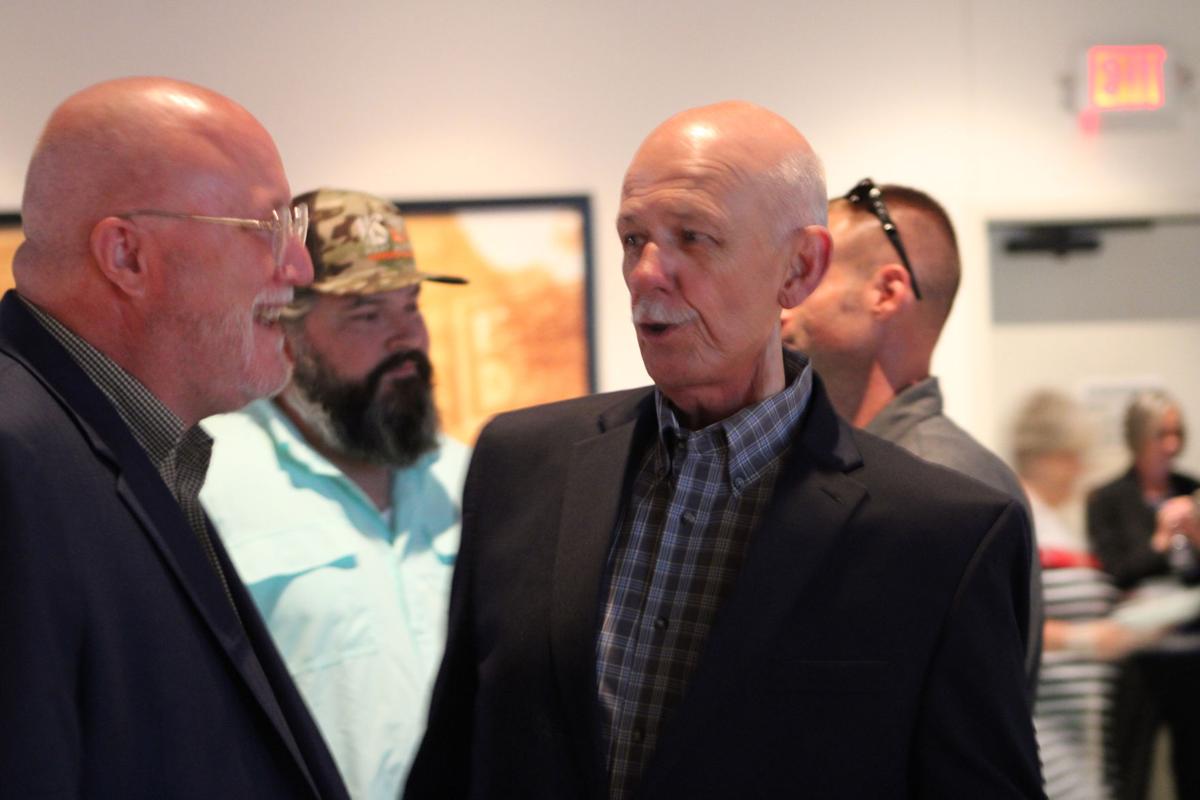 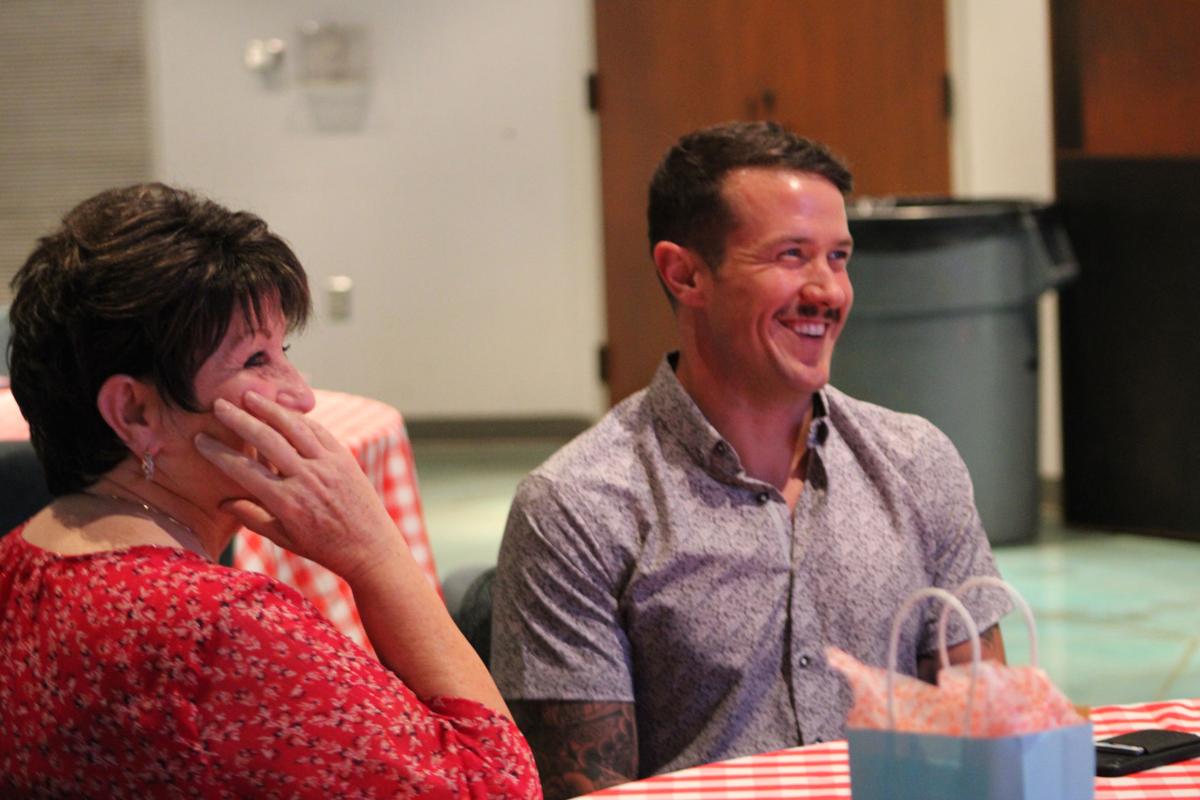 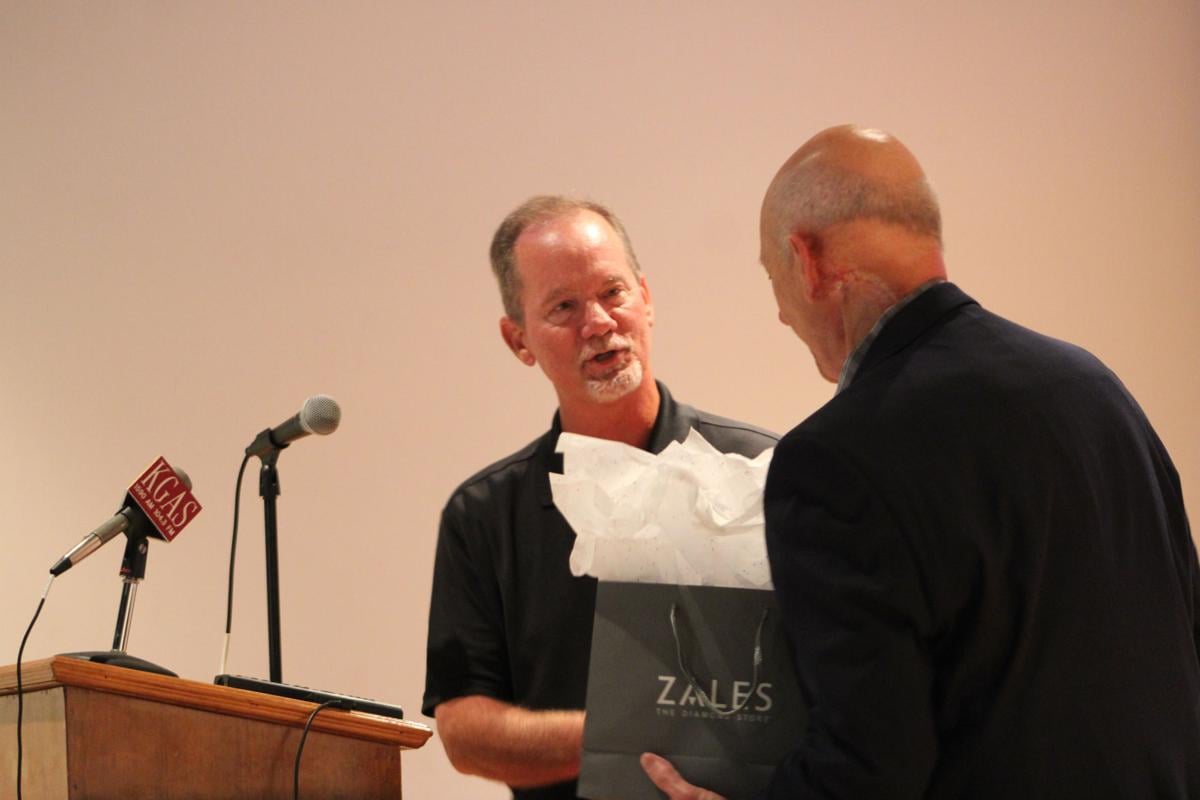 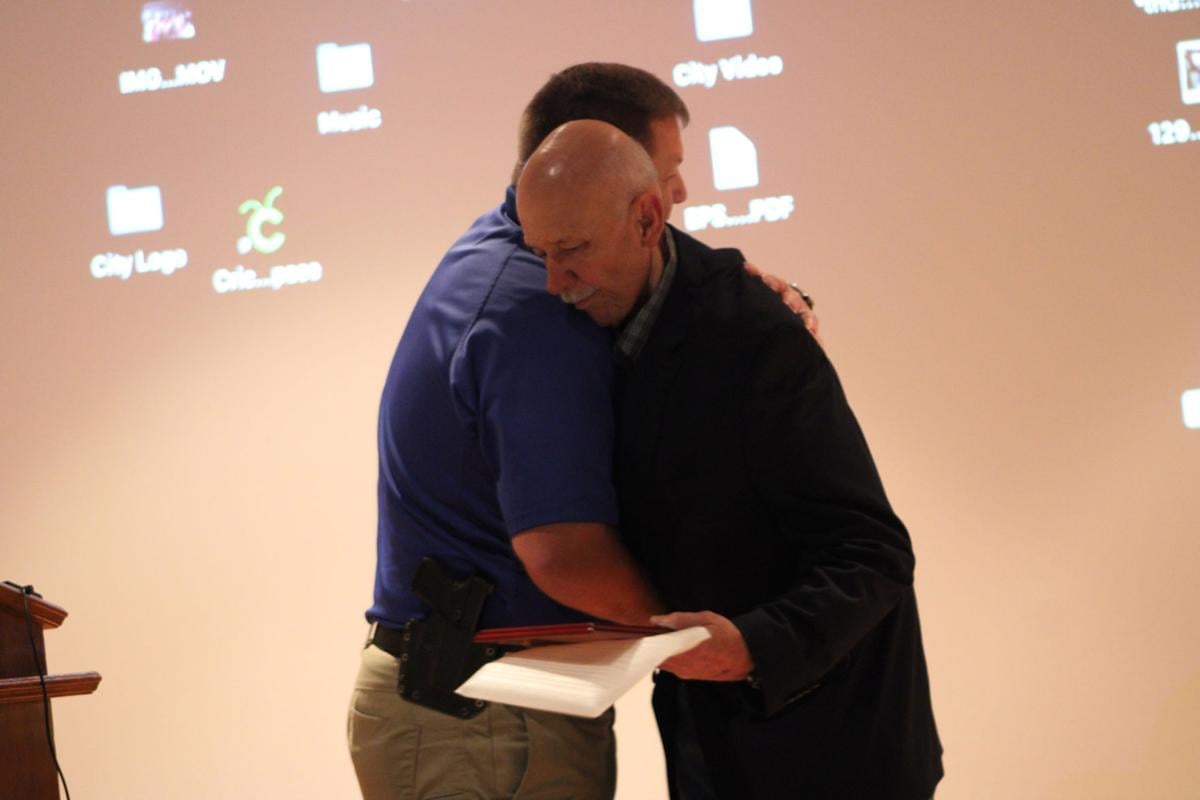 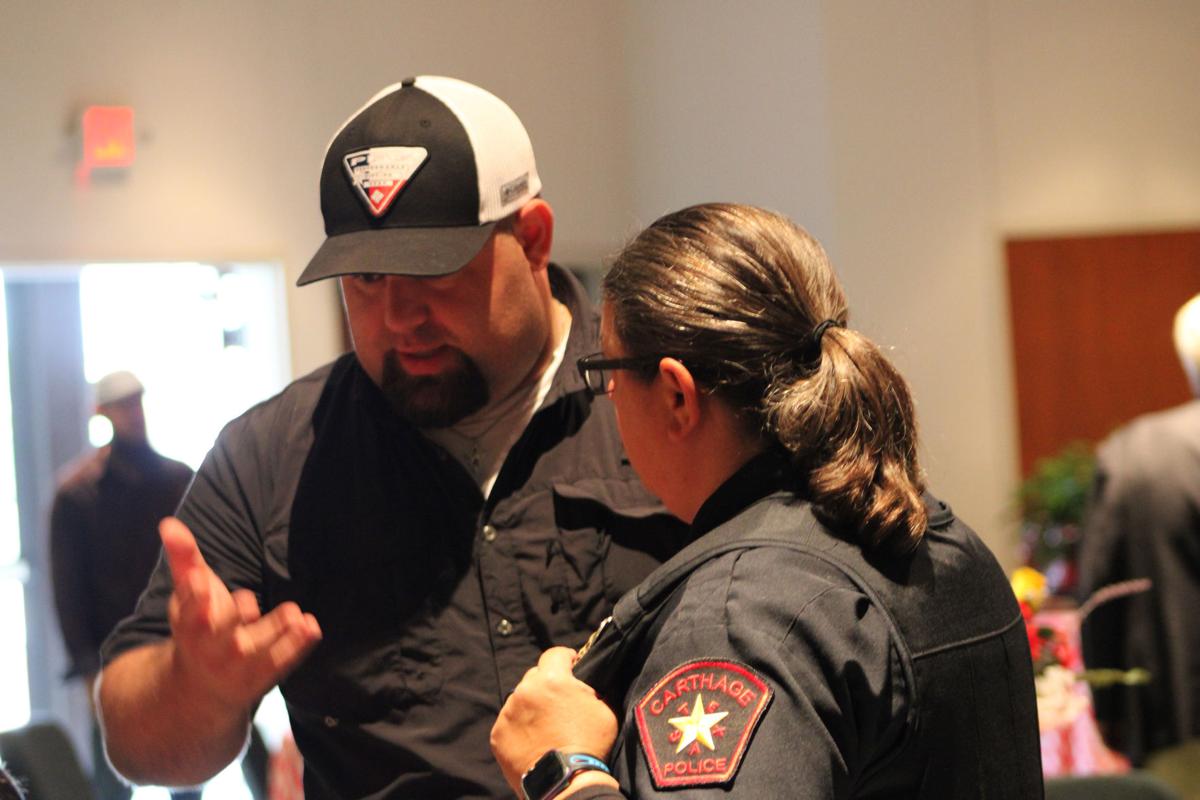 A retirement reception for Carthage Police Chief Jim Vanover was held Tuesday at the Texas Country Music Hall of Fame. Vanover retired at the end of May and was succeeded by Blake Smith.

“I’ve got little feet and he’s got big shoes. I don’t think I’ll ever fill them,” he said.

The pair has worked together since 1998, and it was Vanover who Smith said taught him everything about policing.

“The main thing is treat people the way you want to be treated,” Smith said.

A slideshow, set to the Cops TV show theme “Bad Boys,” played on a loop while photos of Vanover throughout his career popped up on a large screen. Meanwhile, Vanover himself enjoyed handshakes and hugs and pats on the back. His family stayed close throughout the event.

Vanover’s first retirement saw him going to work as a ranger with the Texas and Southwestern Cattle Raisers Association. But in 2010, he once again decided to return to a former employer: CPD.

“You might say it was through a moment of clear thinking, but more likely (former City Manager) Brenda Samford begging him,” Mayor Lin Joffrion joked before giving Vanover a key to the city on Tuesday.

Vanover was named Police Chief in 2011 and remained in that post until the end of May, when he retired again. In total, he has 39 years and three months service in law enforcement. He also served as assistant city manager for the City of Carthage.

Vanover’s tenure at the Carthage Police Department was also marked by health issues. Last year, the chief was hospitalized while dealing with the effects of cancer treatment from years past. Joffrion said Tuesday that throughout his illnesses, Vanover remained committed to his job.

“You may have complained to Ms. Mamie, but you never complained to us,” Joffrion said. “To the contrary, you scheduled your visits to your doctor and your trips around your job and I don’t know too many people who do that.”

Vanover’s voice sometimes fails him, causing him to speak at a whisper’s level. Joffrion recalled that still didn’t prevent him from making sure his officers did their jobs well.

“With your failing voice, I went in to visit Jim one day and he was having a particularly hard time that day speaking and just whispering... He said there was one of my officers that I really kind of needed to witness to and I just said pull up a chair and get right next to me because he needed to hear what I had to say,” Joffrion recalled.

Joffrion said he once tried to persuade Vanover to skip city commission meetings if he was feeling unwell.

“I told him Jim, you don’t have to come to the meetings right now. Just don’t,” Joffrion said. “He said OK, OK. So sure enough next meeting, he was there.”

Vanover’s son Jake read aloud a statement Tuesday from his father that described the city’s support of him and his family over the years as a blessing. Vanover was worried he wouldn’t be able to be heard by everybody.

“Dad, congratulations,” Jake added, before pulling his dad into a hug.

When he first took up his own job, City Manager Steve Williams said he was glad to find out that Vanover was his assistant city manager.

“It was comforting to me to know that I had someone like Jim Vanover that I could discuss things with, he could give me advice on what’s going on, give you the real story, which most of y’all don’t ever know the real story,” Williams said. “He was a tremendous help to me at work. He’s a tremendous friend of mine, and I’ve proud to call him my friend.”

Williams said you could always tell how serious a conversation with Vanover was going to be by how he closed the office door. A gradual closing was no big deal, but if the door rattled something was going to be heavier.

Williams thanked Vanover for his guidance and advice. He said the most telling thing about Vanover was the congratulations he received on Facebook when his retirement was announced. One post read “Congratulations to an honorable man.”

“To be in the service he’s been in and still be called an honorable man, especially in the time that we’re in today, Jim, that’s just a testament to who you are and the type of person you are,” Williams said.

Joffrion called Vanover’s career remarkable and said both city officials and the wider Carthage community appreciated his dedication. One thing Vanover did all the time, Joffrion said, was end his conversations by saying “If there’s anything I can do too help, you call me.”

“Jim, if there’s anything I can ever do to help you, call me,” Joffrion said.