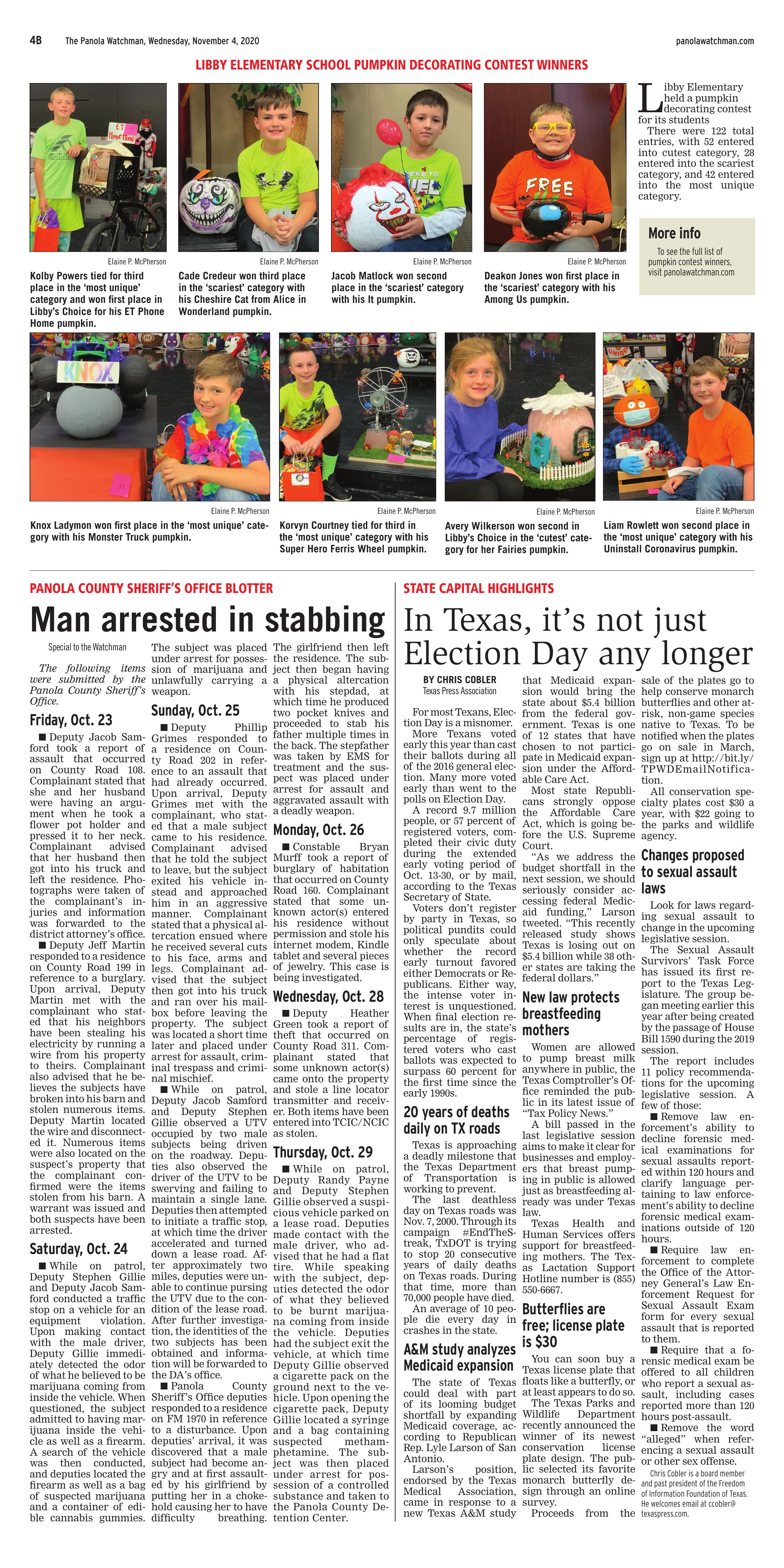 The following items were submitted by the Panola County Sheriff’s Office.

While on patrol, Deputy Randy Payne and Deputy Stephen Gillie observed a suspicious vehicle parked on a lease road. Deputies made contact with the male driver, who advised that he had a flat tire. While speaking with the subject, deputies detected the odor of what they believed to be burnt marijuana coming from inside the vehicle. Deputies had the subject exit the vehicle, at which time Deputy Gillie observed a cigarette pack on the ground next to the vehicle. Upon opening the cigarette pack, Deputy Gillie located a syringe and a bag containing suspected methamphetamine. The subject was then placed under arrest for possession of a controlled substance and taken to the Panola County Detention Center.

For most Texans, Election Day is a misnomer.

More Texans voted early this year than cast their ballots during all of the 2016 general election. Many more voted early than went to the polls on Election Day.

A record 9.7 million people, or 57 percent of registered voters, completed their civic duty during the extended early voting period of Oct. 13-30, or by mail, according to the Texas Secretary of State.

Voters don’t register by party in Texas, so political pundits could only speculate about whether the record early turnout favored either Democrats or Republicans. Either way, the intense voter interest is unquestioned. When final election results are in, the state’s percentage of registered voters who cast ballots was expected to surpass 60 percent for the first time since the early 1990s.

Texas is approaching a deadly milestone that the Texas Department of Transportation is working to prevent.

The last deathless day on Texas roads was Nov. 7, 2000. Through its campaign #EndTheStreak, TxDOT is trying to stop 20 consecutive years of daily deaths on Texas roads. During that time, more than 70,000 people have died.

An average of 10 people die every day in crashes in the state.

“This is so horrific. Come on Texas! We can do better!” said Dr. Beverly Thompson Kuhn of the Texas A&M Transportation Institute.

The state of Texas could deal with part of its looming budget shortfall by expanding Medicaid coverage, according to Republican Rep. Lyle Larson of San Antonio.

Larson’s position, endorsed by the Texas Medical Association, came in response to a new Texas A&M study that Medicaid expansion would bring the state about $5.4 billion from the federal government. Texas is one of 12 states that have chosen to not participate in Medicaid expansion under the Affordable Care Act.

Most state Republicans strongly oppose the Affordable Care Act, which is going before the U.S. Supreme Court.

“As we address the budget shortfall in the next session, we should seriously consider accessing federal Medicaid funding,” Larson tweeted. “This recently released study shows Texas is losing out on $5.4 billion while 38 other states are taking the federal dollars.”

Women are allowed to pump breast milk anywhere in public, the Texas Comptroller’s Office reminded the public in its latest issue of “Tax Policy News.”

A bill passed in the last legislative session aims to make it clear for businesses and employers that breast pumping in public is allowed just as breastfeeding already was under Texas law.

Butterflies are free; license plate is $30

You can soon buy a Texas license plate that floats like a butterfly, or at least appears to do so.

The Texas Parks and Wildlife Department recently announced the winner of its newest conservation license plate design. The public selected its favorite monarch butterfly design through an online survey.

Proceeds from the sale of the plates go to help conserve monarch butterflies and other at-risk, non-game species native to Texas. To be notified when the plates go on sale in March, sign up at http://bit.ly/TPWDEmailNotification.

All conservation specialty plates cost $30 a year, with $22 going to the parks and wildlife agency.

Look for laws regarding sexual assault to change in the upcoming legislative session.

The Sexual Assault Survivors’ Task Force has issued its first report to the Texas Legislature. The group began meeting earlier this year after being created by the passage of House Bill 1590 during the 2019 session.

The report includes 11 policy recommendations for the upcoming legislative session. A few of those:

One-third of adult Texans, or 6.3 million people, have experienced sexual assault at some point in their lives, according to a 2015 study by the University of Texas at Austin’s Institute on Domestic Violence and Sexual Assault.

Libby Elementary held a pumpkin decorating contest for its students