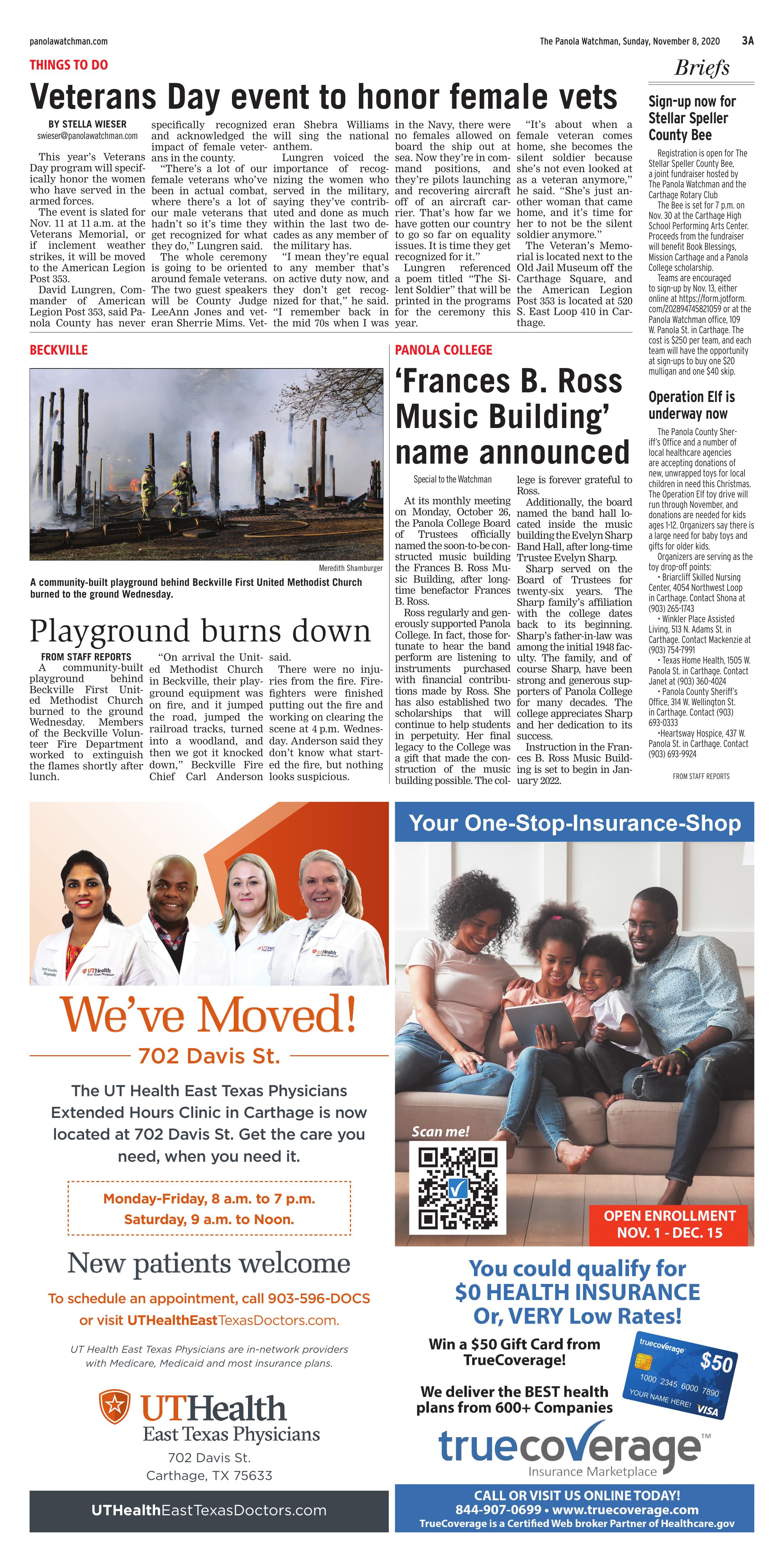 A man installs U.S. Flags along West Panola Street at Panola College in October 2019 ahead of Veterans Day.

This year’s Veterans Day program will specifically honor the women who have served in the armed forces.

The event is slated for Nov. 11 at 11 a.m. at the Veterans Memorial, or if inclement weather strikes, it will be moved to the American Legion Post 353.

The whole ceremony is going to be oriented around female veterans. The two guest speakers will be County Judge LeeAnn Jones and veteran Sherrie Mims. Veteran Shebra Williams will sing the national anthem.

Lungren voiced the importance of recognizing the women who served in the military, saying they’ve contributed and done as much within the last two decades as any member of the military has.

“I mean they’re equal to any member that’s on active duty now, and they don’t get recognized for that,” he said. “I remember back in the mid 70s when I was in the Navy, there were no females allowed on board the ship out at sea. Now they’re in command positions, and they’re pilots launching and recovering aircraft off of an aircraft carrier. That’s how far we have gotten our country to go so far on equality issues. It is time they get recognized for it.”

Lungren referenced a poem titled “The Silent Soldier” that will be printed in the programs for the ceremony this year.

“It’s about when a female veteran comes home, she becomes the silent soldier because she’s not even looked at as a veteran anymore,” he said. “She’s just another woman that came home, and it’s time for her to not be the silent soldier anymore.”

The Veteran’s Memorial is located next to the Old Jail Museum off the Carthage Square, and the American Legion Post 353 is located at 520 S. East Loop 410 in Carthage.

A community-built playground behind Beckville First United Methodist Church burned to the ground Wednesday. Members of the Beckville Volunteer…

A rendoring of the Frances B. Ross Music Building to be built.

At its monthly meeting on Monday, October 26, the Panola College Board of Trustees officially named the soon-to-be constructed music building the Frances B. Ross Music Building, after long-time benefactor Frances B. Ross.

Ross regularly and generously supported Panola College. In fact, those fortunate to hear the band perform are listening to instruments purchased with financial contributions made by Ross. She has also established two scholarships that will continue to help students in perpetuity. Her final legacy to the College was a gift that made the construction of the music building possible. The college is forever grateful to Ross.

Additionally, the board named the band hall located inside the music building the Evelyn Sharp Band Hall, after long-time Trustee Evelyn Sharp.

Sharp served on the Board of Trustees for twenty-six years. The Sharp family’s affiliation with the college dates back to its beginning. Sharp’s father-in-law was among the initial 1948 faculty. The family, and of course Sharp, have been strong and generous supporters of Panola College for many decades. The college appreciates Sharp and her dedication to its success.

Instruction in the Frances B. Ross Music Building is set to begin in January 2022.